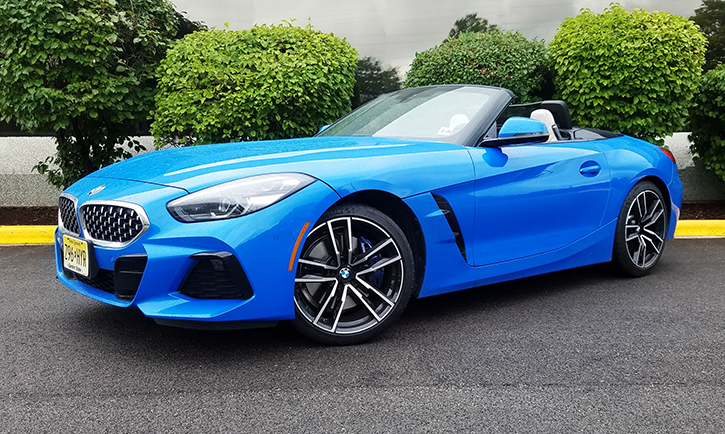 The good: Fine blend of ride comfort and handling prowess

The not so good: Limited cargo space, spendy options bump up bottom-line prices

Here’s hoping that die Menschen at BMW are real mensches because after we say lots of nice things about the new iteration of their 2-seat sports car, we’re going to have a little laugh over one of its weirder features. 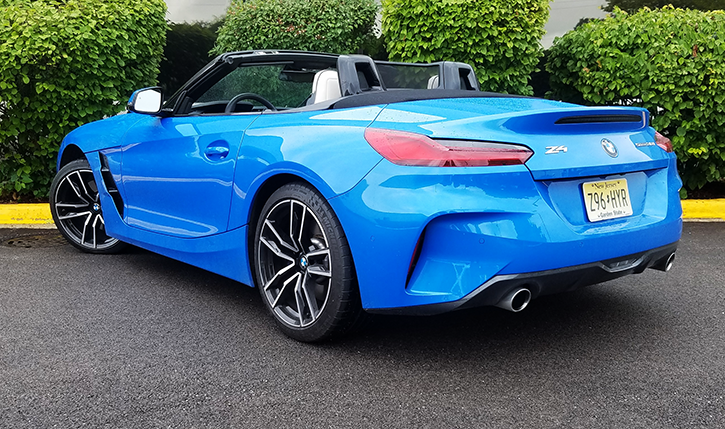 Unlike the previous-generation Z4, the 2019 model reverts to a fabric softtop in place of a retractable hardtop.

After a hiatus of a couple years, the Z4 rejoins the BMW lineup for 2019. The all-new, redesigned car enjoys the benefits of new styling and dimensions, roomier passenger and luggage capacity, better weight distribution, and more power than when there last was a Z4 in model-year 2016. If you get it as a 4-cylinder sDrive 30i—which is the only way the Z4 comes for 2019—it starts at $50,695 with delivery. We wouldn’t count on many of them actually sticking to that price, however. Ours surely didn’t, ramping up to $63,545.

All BMW Z4s boast genuinely classy cabin trimmings and a bit more occupant space than you might expect for a two-seat sports roadster. Cabin storage is at premium, but a small covered bin between the seat backs is a nice touch.

Today’s Z4 is 3.3 inches longer and 2.9 inches wider, albeit with a 1.1-inch-shorter wheelbase. It weighs less (at almost 3300 pounds as a 30i), for which you can mostly thank the return of a fabric top in place of the previous retractable hardtop. In all this shape shifting, weight balance in the 4-cylinder car has, for all practical purposes, reached the ideal 50/50 front-rear distribution.

Satin-metal trim dresses up the center console, which also includes the drive-mode selector buttons and the infotainment-system controls. The infotainment screen itself is laudably wide and mostly easy to navigate.

The 2.0-liter four with twin-scroll turbocharger makes 255 horsepower and 295 lb-ft of torque, 15 more ponies and an additional 40 lb-ft than the previous Z4 four. It is a nice-sounding engine that jumps from a stop, and displays even better throttle response and snappier shifts of the 8-speed automatic transmission in the “Sport” driving modes that can be summoned. Note that with this new generation, BMW has expunged a manual transmission from the two Z4 models that will be sold in the USA (an sDrive M40i model, powered by a 382-hp 3.0-liter 6-cylinder, joins the Z4 lineup for 2020). There are paddle shifters for drivers who want to make their own gear selections, and launch control for those who think they’ll need it. The manufacturer claims a 0-60-mph time of 5.2 seconds.

As for fuel economy, this driver saw 23.6 mpg from a trip of 184 miles that included 65 percent city-type conditions. Whether or not that’s good is debatable. It’s probably not bad compared to other 4-cylinder sportsters, but it wasn’t even up to the EPA’s projected 25 city mpg for the 30i. The feds say highway running should yield 32 mpg, with 28 mpg expected in mixed driving.

The ’19 Z4 rolls out a new suspension with struts up front and multiple links in back. It rides smoothly with good bump resistance in “Comfort” mode, especially for a 97.2-inch-wheelbase thing, but even with the extra-cost M adaptive suspension in Sport it’s nowhere near punishing. Nicely weighted steering responds well to inputs and translates into direct and exact action. The tight open body shrugs off flex and rattles, and the Z4 corners with hardly a whiff of body roll. The steering and chassis balance made it fun for this reviewer to keep up some speed through the curving ramp at his expressway exit. A track-oriented option package tossed in an M Sport differential to aid rear-drive power delivery and uprated brakes that performed excellently. 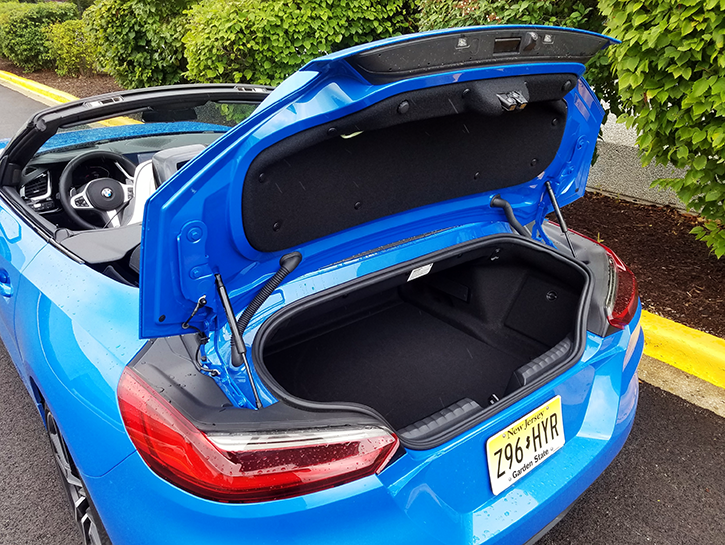 There’s 9.9 cubic feet of cargo space in the BMW Z4’s trunk. That’s not a lot, but it is a bit better than a Jaguar F Type or Mercedes-Benz SL Class.

This Z4 hardly is the most claustrophobic small convertible you’ll ever see. Seats adjust for flexible legroom—even most taller folks should fit—and there’s a sense of space across the cabin. Headroom under the raised top isn’t bad, either, but driver vision suffers the usual 2-seater over-the-shoulder blind spot, and isolation from external sound wasn’t the most serene this driver has ever experienced. It takes 10 seconds to raise or lower the top—which can be done with the car in motion up to 31 mph.

Cabin materials look and feel great. Cosseting power-adjustable sport seats contain both passengers. The ones in the test car were clad in Ivory White Vernasca leather. “SensaTec” leatherette covers the dash, and patterned aluminum trim creates some visual interest. A leather-wrapped M steering wheel and a wind deflector that fits between the headrests are standard.

Instrumentation is the province of “Live Cockpit Professional,” the combination of high-resolution digital instrument cluster and central information display that appear on a pair of 10.25-inch screens. The virtual driving instruments have the same pentagonal look that’s appearing in other contemporary BMWs. The infotainment portion offers the choice of iDrive-dial control or touchscreen activation. Handy “save as favorite” and “delete from favorites” touch points make it easy and direct to clear out space for desired audio presets, and anything that reduces time spent twiddling the console controller is a step in the right direction. An AM/FM/MP3 audio system is standard, as are a year of Apple CarPlay smartphone compatibility (you have to subscribe after that, and, sorry, no Android Auto) and navigation. Satellite radio and a Wi-Fi hotspot were in option packages tacked on to the test car. The standard automatic climate control is subject to a row of buttons, including repetitive-push mode, fan-speed, and temperature selectors.

The Z4 makes what it can of cabin storage. The best feature is the full-width net pouch that runs behind the seat backs. Otherwise, the glove box is small, and what looks like a console box actually covers two cup holders (with a tiny bit of space left around them). There are narrow door pockets, a tiny net pouch on the passenger side of the floor tunnel, and a covered console bin for USB/12-volt inputs and the extra-cost wireless charger.

Limited trunk space has room for a couple of soft-sided overnighters. However, at 9.9 cubic feet, it’s still about 50 percent bigger than in the previous Z4 that had to make provision for the fold-up hardtop. Pistons support the trunklid, so hinges don’t reduce what space there is. Tiedown hooks, a left-side pouch, a right-side elastic retaining strap, and even a pass-through to the cabin add utility.

What, then, was so amusing? Within the audio system is “Caring Car,” a pair of 3-minute sound-and-environment programs dubbed “Relax” and “Vitalize.” Relax plays soothing music and runs the fan on the lowest speed. Vitalize combines speedier Euro-techno-ish music with higher, automatically varying fan speeds. I remember when the very act of driving a BMW two-seater was supposed to make you feel “vitalized,” but times change. Whatever gets you through the night. . . .

The BMW Z4 sDrive30i is surprisingly practical for a two-seat, luxury-brand sports car. Its 255-hp engine is plenty engaging and invigorating in both everyday driving and spirited sprints, and it suspension provides crisp cornering capabilities while maintaining decent ride quality.