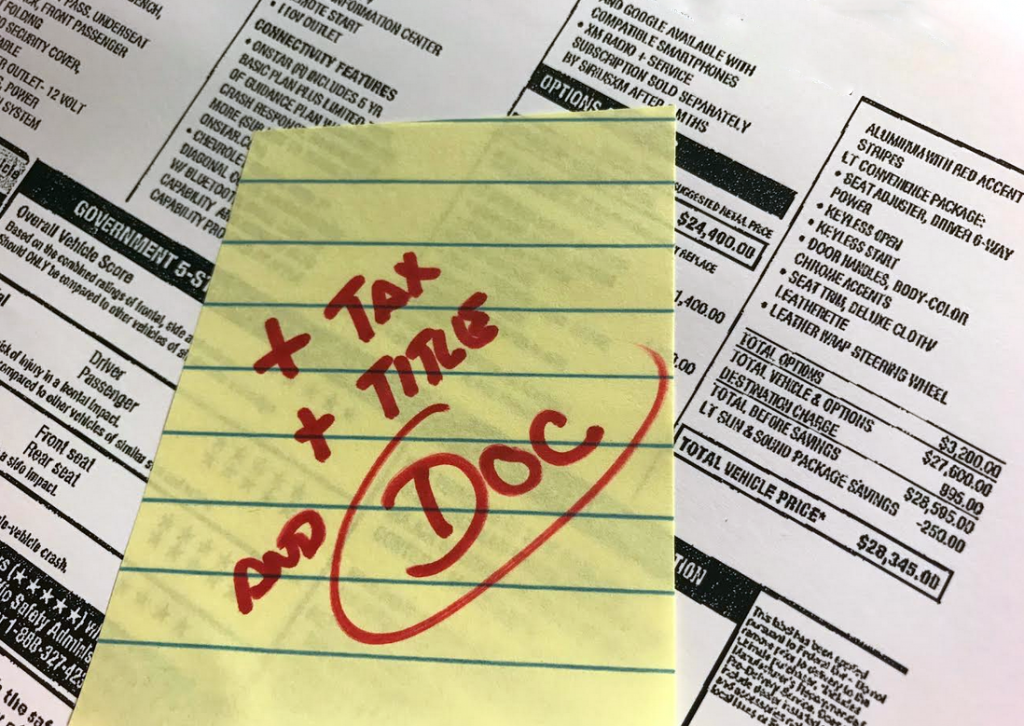 You’ve probably been asked to pay it, but do you know what the doc fee covers?

One challenge new-car customers face is determining the veracity of certain fees and charges that may be added to the price of the vehicle being purchased.

We recently discussed the destination charge, which is a real cost that is passed along from the manufacturer to the purchaser. Charges including tax, title, and license, are also legitimate costs, though consumers are encouraged to scrutinize these line items, and asks questions of their salesperson should they feel they are in any way inflated.

Tack-on fees including the fuel charge and dealer prep are generally considered bogus, and are typically used to inflate a vehicle’s final cost.

Another charge, however, falls into a murkier area, and that’s the doc fee.

In Illinois, the doc fee is capped by law at $175.94 for 2018. Many states have enacted similar laws, though the dollar amount varies.

What is the doc fee? Also known as the service-and-handling fee in some states, and the document-processing fee in California, the doc fee has a long and storied history, and is so commonly applied to final new- and used-car prices that it might just as well be considered legitimate.

When I sold cars back in 1991, the sales staff was instructed to inform customers that the doc fee covered the dealership’s cost of doing business with the government. And, indeed, most dealerships employ several full-time employees just to handle the administrative paperwork and digital filing that is associated with the sale of an automobile.

Still, you may ask, shouldn’t those expenses be considered a cost of doing business? The short answer to that question is yes, though the doc fee was never really meant to cover any specific expense.

Unless the dollar amount is regulated, the doc fee can range in cost from zero dollars to whatever a salesperson can get away with. In Illinois, for example, abuse of the doc fee was so prevalent that the state passed a law in 1991 capping the fee at $40. That fee is keyed to the Consumer Price Index (CPI) and has increased slightly every year. For 2018 the most a dealer in Illinois can charge is $175.94.

Roughly a third of all states now put a cap amount that can be charged as a doc fee. The downside of all this legislation is that the doc fee has been legitimized, and is so commonly applied in some states that the amount is preprinted on dealer pricing worksheets.

Here we’d like to address a few questions commonly asked about the doc fee:

Do I have to pay the doc fee?

No. However, we suggest ignoring the doc fee when negotiating, and focusing only on the final price of the vehicle. Note that the doc fee is so well integrated into the sales processes at many dealerships that it may be difficult for your salesperson to remove it.

Can I negotiate the doc fee?

Absolutely. That said, we recommend worrying more about the final price of the vehicle instead of random fees (see above). Arguing with your salesperson about the veracity of the fee may distract you from watching the bottom line.

Does the doc fee apply to new and used vehicles?

Yes. Dealers almost always apply it to all vehicle sales, and the state laws regulating doc fees—where in force—apply to both new- and used-car transactions.

Is the doc fee taxable?

Yes. A recent federal-court ruling determined that dealerships must pay taxes on revenue realized via doc fees, thus the fee is taxable.

What should I do if I dealer tries to charge me too much for the doc fee?

In states where the fee is regulated, overcharging is unlikely—as the penalties dealerships face for violating such laws are typically severe.

In states where the fee is not regulated, we again recommend focusing on the final price of the car, and ignoring line-item fees. By price shopping two or more dealerships for the same vehicle, you can use competitive pressure to help negotiate a fair price for the car or truck you’re considering purchasing.