I’ve long believed that if American Motors had been able to muster the capital to fully redesign its cars sometime around 1980, the company might have lasted well into the Nineties, maybe longer. Instead, AMC management—at the time already working with the company’s soon-to-be partner, the French automaker Renault—played a hunch, and built a line of full-time AWD passenger cars off of a long-serving existing platform. The result helped buy AMC a few more years, but in the end wasn’t enough to save the company.

Given AMC’s experience building Jeep products, The company’s expertise in the field of 4WD and AWD was something of a given, so the brand extension seemed logical at the time. Enter the AMC Eagle. These all-wheel-drive, raised-ride-height cars were unique in the American auto industry, though Subaru had sporadically sold a subcompact 4WD wagon in the States in low volume beginning in 1975.

New for 1980, the Eagle arrived in coupe, sedan, and wagon body styles, all based on AMC’s compact Concord. Of the three, the wagon was the most popular in its inaugural year, easily outselling the coupe and sedan combined.

Things got interesting for 1981, when Eagle versions of the AMC Spirit and Spirit Liftback (dubbed Eagle SX/4 and Eagle Kammback, respectively) were introduced. These variations were short lived; the Kammback was dropped after 1982, as was the Eagle Coupe. The SX/4 was dropped after 1983. 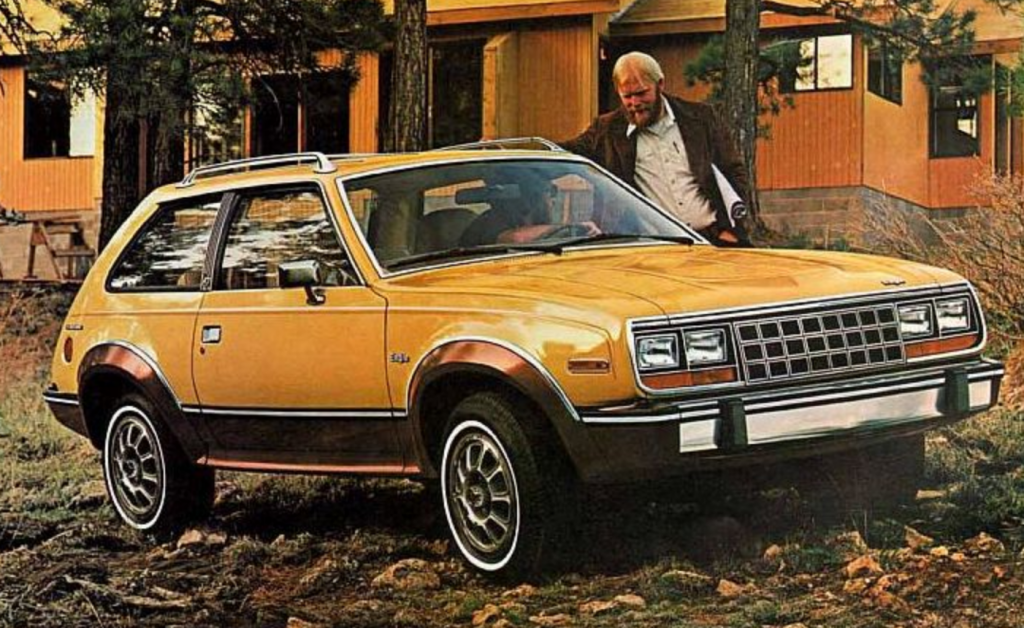 The most impressive thing about the Eagle lineup, especially the wagon, was the price. AMC positioned the Eagle as a premium product, and set the MSRP accordingly. For 1980, for example, an Eagle Wagon sold for almost $2100 more than a similarly equipped Concord Wagon—almost a third more money.

General Motors’ X-Cars debuted as 1980 models, sporting crisp, clean lines and space-efficient cabins. Compared to these cars, the Eagle lineup, despite the high-tech AWD drivetrains, started to look very much like products of the early Seventies, which they were.

With sales in steep decline, the Eagle was killed after 1988, after an output of just 2308 wagons that year (no other body styles were offered by then).

If you’re like me, there’s a warm spot in your heart for these hearty, go-anywhere cars. I’ve always liked the rugged Eagle look, and have wondered often if a style update might have prolonged their appeal.

Presented here is Consumer Guide’s original review of the 1980 AMC Eagle, as published in our Auto Test ’81 magazine.

If you have any special memories of the AMC Eagle, please share them with us. The place to leave comments is down below. 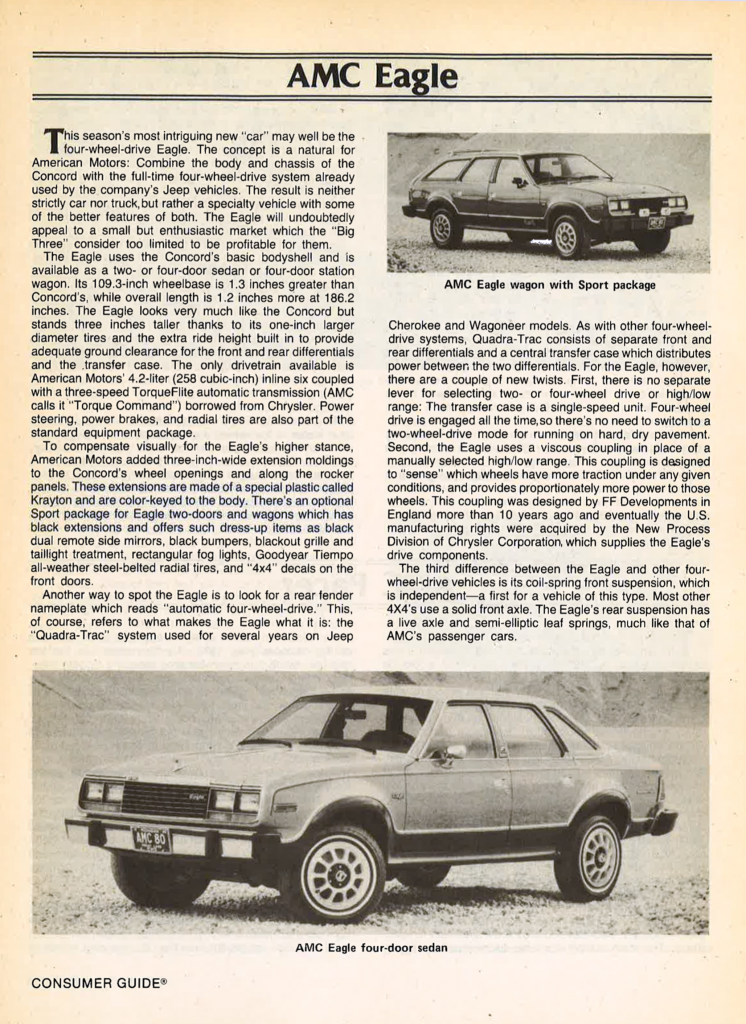 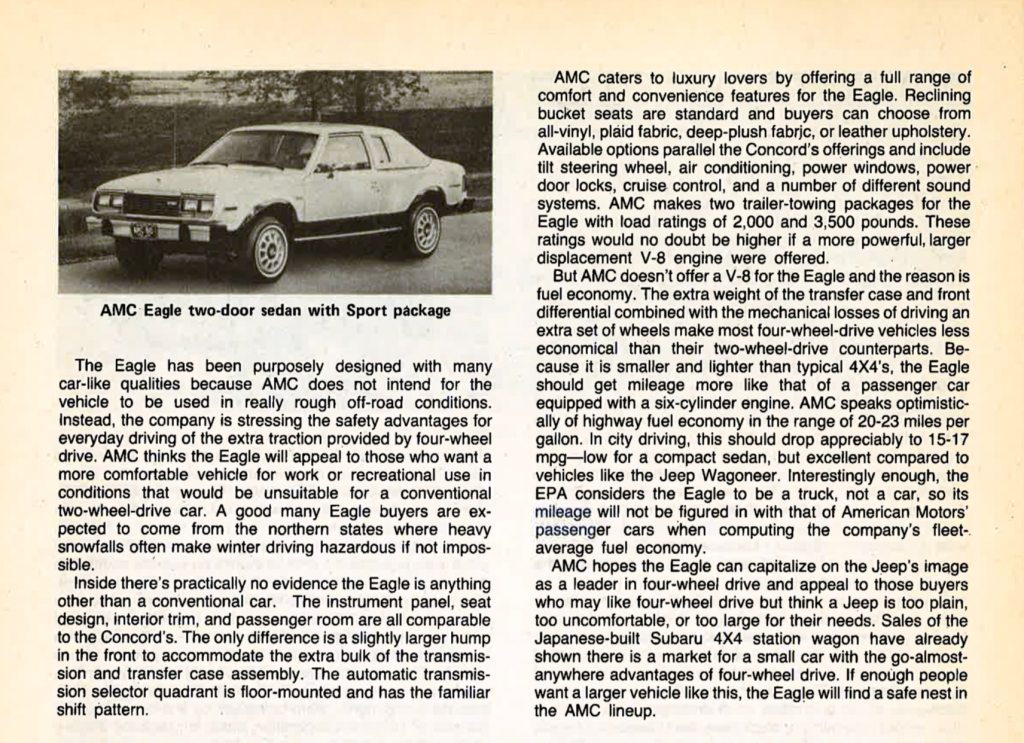 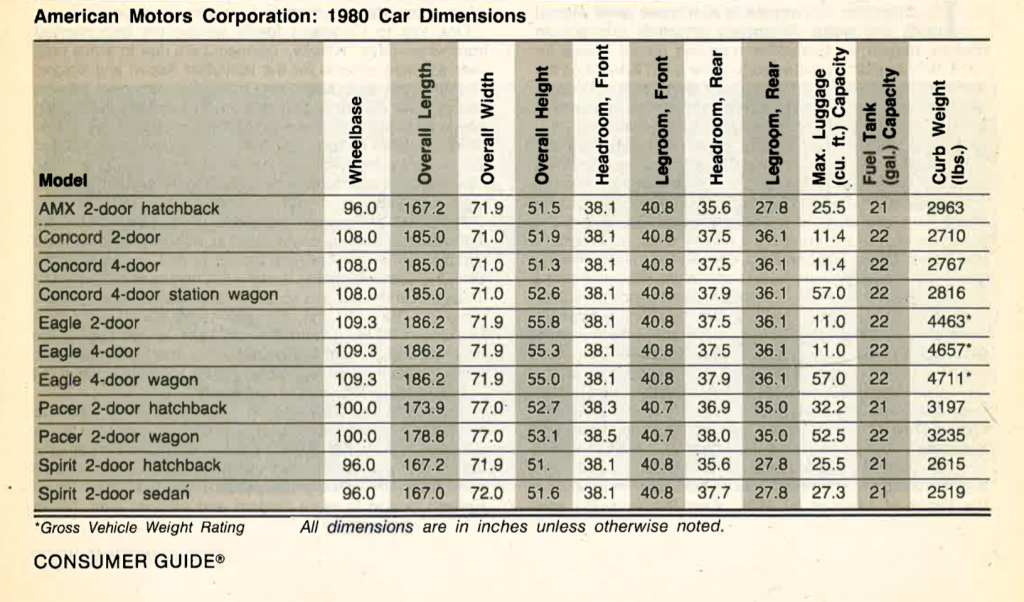 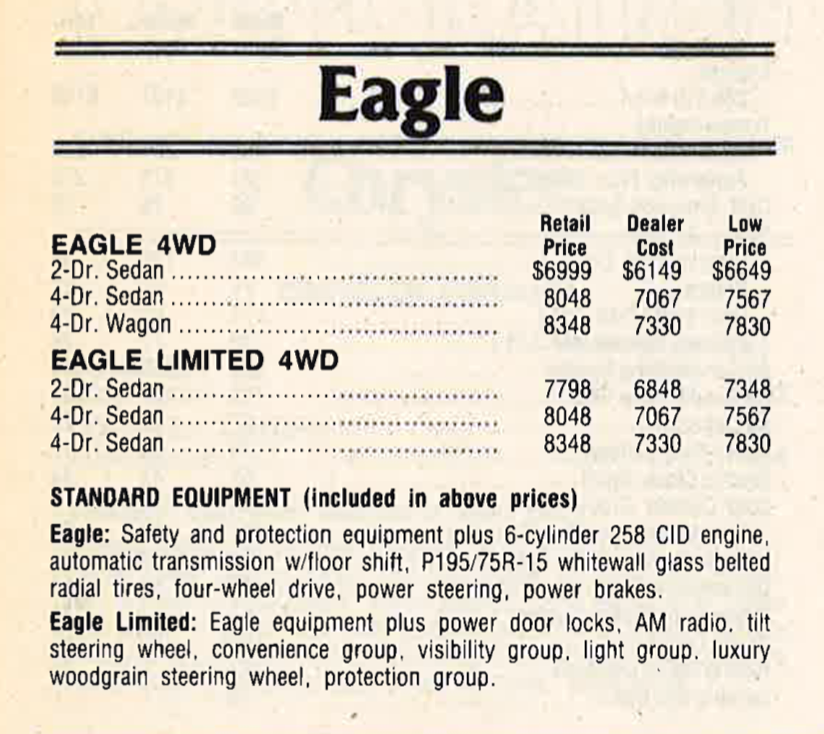