The good: Full complement of comfort, safety, and technology features

The not so good: Complicated touchscreen interface, so-so passenger room

To some, Volvo is as much known for station wagons as it is for safety. But for those who grew up being chauffeured in one of its boxy predecessors, the current V60 wagon may look a bit … startling. 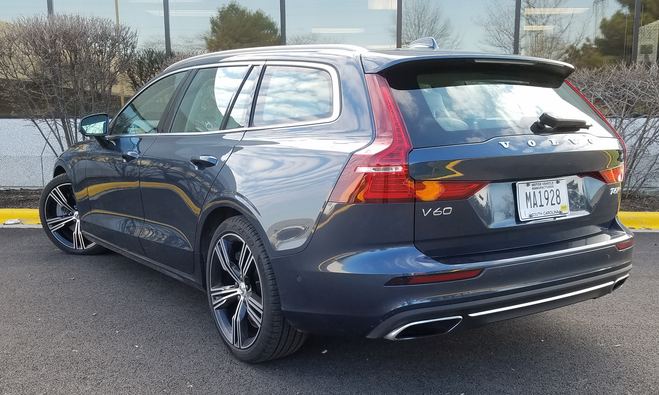 It’s one of the few station wagons on the market, and perhaps represents what many consider to be the quintessential Volvo — though the new V60 hardly looks like the boxy Volvo wagons of old.

That’s because it’s based on the new-for-2019 S60 sedan, itself somewhat of a startling design – at least when compared to previous editions.

Although Volvo also offers the larger V90, the V60 is clearly the company’s bread-and-butter wagon. And while the “hauling” market is shifting to crossovers, the V60 proved to be adequately spacious while standing out from the crossover crowd with its low, sleek lines and carlike dynamics.

As the V60 shares many elements with the S60 sedan, we invite you to read our review of a 2019 S60 T6 for the basics. Here we’ll concentrate on the differences — the primary one, of course, being cargo capacity.

One look inside tells you that the V60 T6 is a premium-level car, as the interior is dressed to impress. However, space can be tight for taller folks, particularly in the rear seat if the seat ahead is moved far back.

Fold down the rear seat backs, and the V60 can accommodate 50.9 cubic feet worth of stuff, about on par with the capacity of a smallish compact crossover — or a bit more than Volvo’s own XC40 subcompact crossover. However, the V60’s midsize length and low silhouette means that the cargo space is longer but lower than that of a crossover’s, so that may have to be taken into account if taller items are to be placed in back. Volvo says that with the rear seat backs folded, the area is 66.7 inches long at the roof, 71.7 at the floor, while the opening is 25.4 inches high. Also of note is that the floor is just 22.7 above ground level, which is lower than in most crossovers.

Other than that, the V60’s primary differences compared to the S60 sedan are in pricing and equipment levels. The closest comparison is for the base versions of both, where the $38,900 front-wheel-drive V60 T5 Momentum wagon sits about $3100 north of a similar S60 T5 Momentum sedan. After that, things get murkier, as equipment levels vary quite a bit between comparable trim levels of each.

The base V60 T5 comes with a 250-horsepower 2.0-liter turbo and front-wheel drive. Moving up to the T6 version of our tester brings a 316-horsepower turbocharged and supercharged version of the 2.0 along with all-wheel drive, a jump that costs $4500. Our tester was a top-line T6 Inscription (there is no T8 plug-in hybrid version of the V60 as there is with the S60) that adds $6000 but brings such features as front cornering lamps, leather upholstery, 4-zone climate control, cooled glovebox, 10-way power front seats with 4-way power lumbar adjustment and power cushion extensions, blind-spot alert, rear-cross-traffic alert with automatic braking, hands-free power liftgate, auto-dimming inside and outside mirrors, Homelink transmitter, navigation system, and Harman Kardon sound system.

The V60’s cargo area may not be as spacious as that of a similar-size crossover, but it’s usefully cubic. And the floor is long when the rear seat backs are folded flat, which can be done with handy release buttons at the back, where there’s also a 12-volt outlet. The rear seat back includes a pass-through for skis and such, but the release (arrow) is on the back side of the pass-through, making it awkward to reach and actuate.

The wagon’s thinnish rear roof pillars provide good rearward visibility, aided by the optional 360-degree cameras. While there’s no “official” underfloor space in back, you can stash a bit of stuff around the spare tire. The rear seat back offers a pass-through, though — as in other Volvos — the release for it is on the back (cargo-area) side, and it requires an awkward press downward to activate. On the plus side, handy buttons at the rear of the cargo area can be pressed to release the rear seat backs.

The optional 19-inch wheels and accompanying low-profile tires fitted to our test vehicle (in place of 18s) probably didn’t help ride quality, but the optional Four-C adaptive suspension may have, as it was quite good overall. Our timer clocked the V60 T6 at 5.85 seconds to 60 mph, a credible performance.

Although both this V60 and the S60 we drove had 19-inch wheels in place of their standard 18-inchers — along with tires having shorter, less-absorbent sidewalls — ride quality seemed a bit better in the V60 than in the S60, with credit perhaps going to the V60’s optional Four-C adjustable suspension. We timed the V60 at an average 5.85 seconds from 0-60, close to Volvo’s claim of 5.5 seconds, which is haulin’ — even for a premium midsize car. But while we also averaged a decent 24.4 mpg in about 70-percent highway driving, that was on required (and expensive) premium-grade fuel.

In other ways, the V60 pretty much mirrors the S60, with our only real complaint being with the touchscreen infotainment controls. (We’ve harped on this plenty already, as the same design is used in all current Volvo models.) Interior room may also be tight for taller folks, but primarily only if you try to squeeze in four.

If the idea of a traditional station wagon appeals to you, there aren’t many choices out there — and most are in the premium midsize class. The V60’s closest competitors are the Buick Regal TourX, Jaguar XF, and Mercedes-Benz E-Class wagons, though the Buick is notably cheaper and the other two are significantly more expensive. If you want to go “downmarket” a bit (more in brand-name cachet than in content), Subaru’s Outback could be added to the list. (Later this year, a more direct competitor to the “raised” Outback will be coming from Volvo in the form of the V60 Cross Country, and a redesigned Outback will arrive for 2020.)

Yet even this limited number of station-wagon choices is broader than it used to be, as the body style all but disappeared after SUVs and crossovers came to town. So perhaps the station wagon is making a comeback of sorts, and Volvo’s V60 strikes us as a great example of this up-and-coming breed.

Its “wheels to the ends” proportions make the V60 look as though it’s built on a rear-wheel-drive chassis, but it’s not; the base T5 is front-wheel drive. And the sleek contours hardly scream “Volvo” to those who haven’t studied the make’s newest models. But especially in T6 form, which brings a stout 316 horsepower and all-wheel drive, this Volvo wagon is an accomplished hauler — in more ways than one.