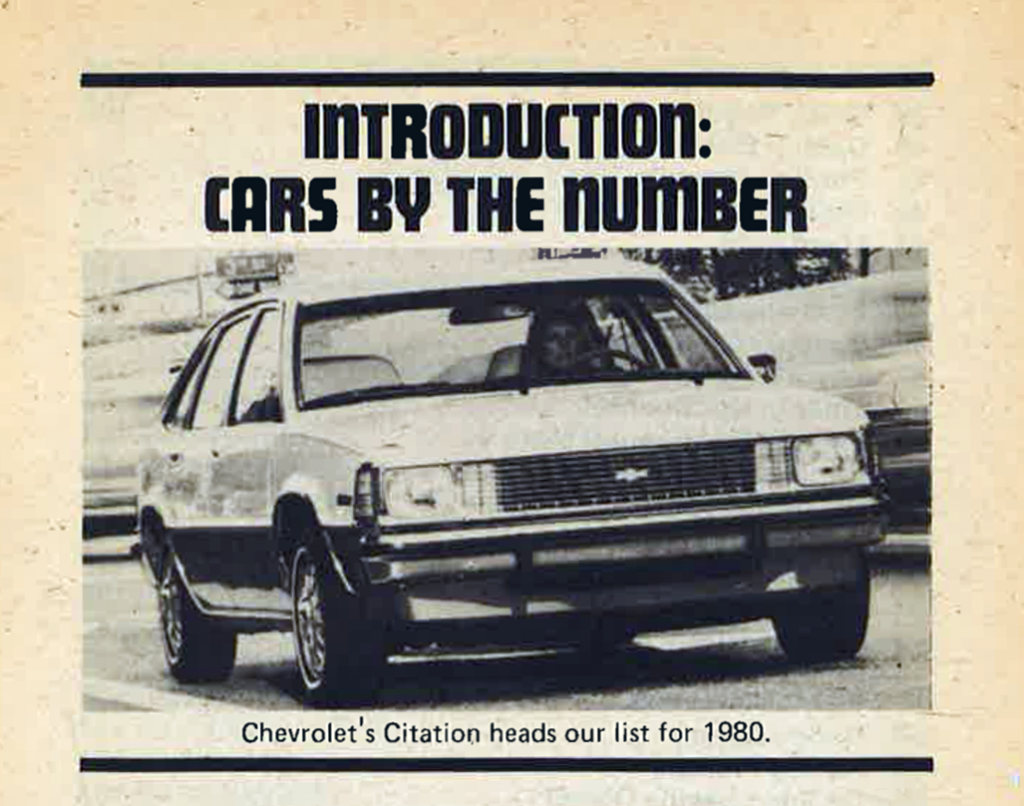 I have never read Frank Herbert’s science fiction epic Dune, but by the time I became aware that the 800-page novel was being adapted for the silver screen, I was pretty well versed on the story.

My buddy Bob had read the book in high school, and could not say enough good things about it. As it turned out, I knew several people who had dipped their literary wickets into the pool of Herbert, and all of them were crazy excited about the film. If you’re old enough, and if your memory is good, you know where this is headed: Dune the motion picture, which debuted in 1984, was an epic flop, panned by virtually every film critic of any significance.

I was crushed. I was sure I was going to be able to immerse myself in the amazing world of Dune without sitting down and turning nearly 1000 pages. For the record, I saw the movie despite the reviews, and it really was awful. And, since I did not yet know who Patrick Stewart was, his presence in the movie didn’t really do much to improve things for me.

Bad as it was, Dune was not the biggest disappointment of the Eighties, at least not for car guys. There was the Chevrolet Citation. Launched in the middle of 1979 for the 1980 model year, General Motors’ X-Car program—which included the Buick Skylark, Oldsmobile Omega, Pontiac Phoenix, and the Citation—was one of the most anticipated car launches since the Edsel (ominous comparison intentional). 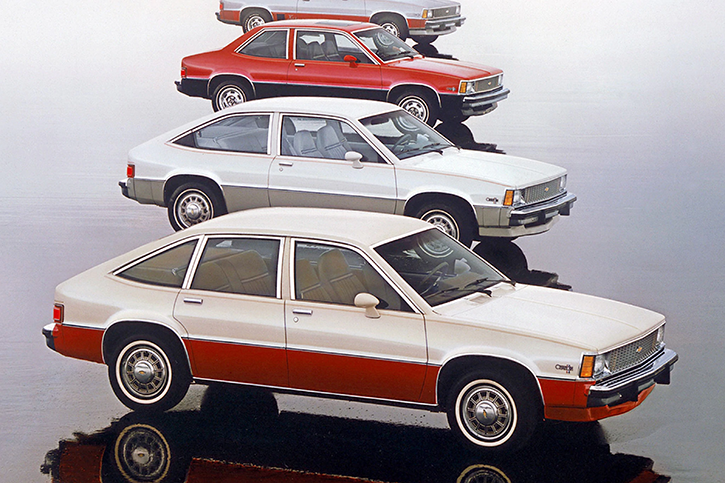 Citation was offered in three body styles. The 2-door Club Coupe (third from the bottom) was unique to Chevrolet, and not offered on the Buick, Pontiac, or Oldsmobile X-Cars.

Unlike Dune, which was panned at its introduction, the X-Cars launched to incredible fanfare. The cars were design breakthroughs, and rightfully heralded for their clean and modern silhouettes, roomy cabins, spritely handling, and impressive fuel economy. The Citation especially impressed the media so well that Consumer Guide named it the best car of 1980.

Thanks in part to a massive ad campaign, the public embraced the X-Cars. Chevrolet sold an astonishing 1.2 million Citations in the car’s first two model years. But sales would fall off quickly after that.

For all of their goodness, the X-Cars were plagued with quality and design issues that were simple too critical to ignore. By the end of 1980, the X-Cars were the subject of seven recalls, all of which were troubling. Issues included:

Not surprisingly, the media picked up on the quality issues and painted GM’s new breakthrough rides as the disappointments they were—utterly destroying public confidence in the vehicles and killing sales. 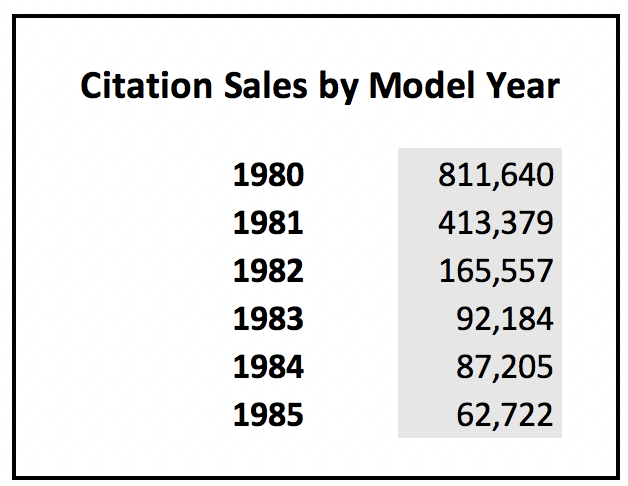 Chevrolet rebadged its X-Car Citation II for the 1984 model year, but by then the damage had been done. Chevy sold nearly 100,000 examples for ’84, which sounds healthy, but that number was a mere fraction of the volume the car saw at its debut. Worse, many of the sales were plied with substantial rebates, reducing GM’s profit margins.

The Omega and the Phoenix were dropped after 1984, the Citation and Skylark after 1985.

Unique among the X-Car variants was the Citation Club Coupe, a coupe with a larger rear quarter windows and a less formal rear roofline. The Club Coupe body style proved to be relatively unpopular, and is a particularly rare sight today.

What follows is Consumer Guide’s original review of the 1980 Citation, which, though glowing, already takes note of the car’s early “teething problems.”

I wish I could tell you that I drove to see Dune in a Citation II, but I cannot. I did drive a Citation in driver’s ed, however, and recall it being especially surefooted in the snow, and easy to see out of.

If you recall spending time with any X-Car, please tell us about it. The place to leave comments is down below. 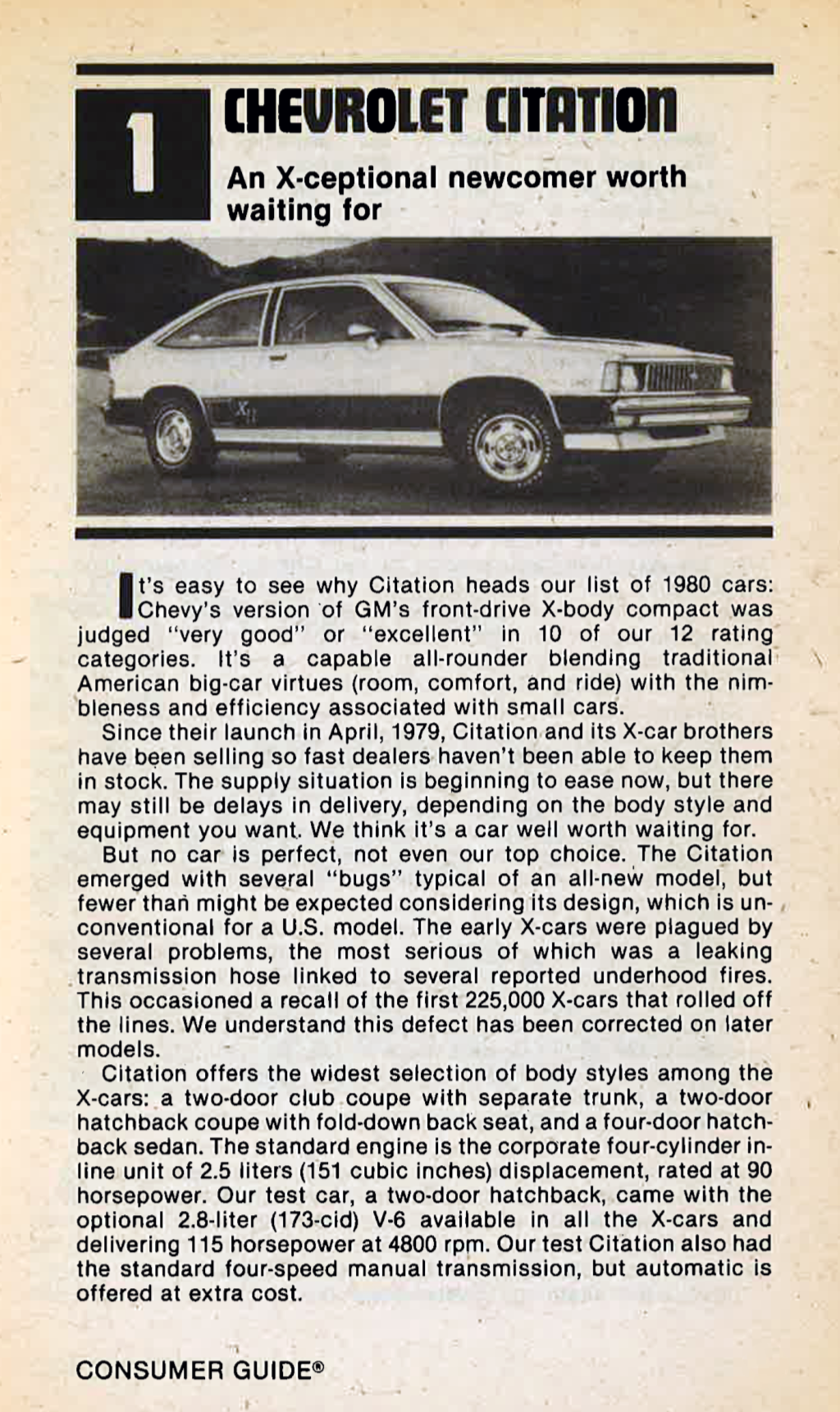 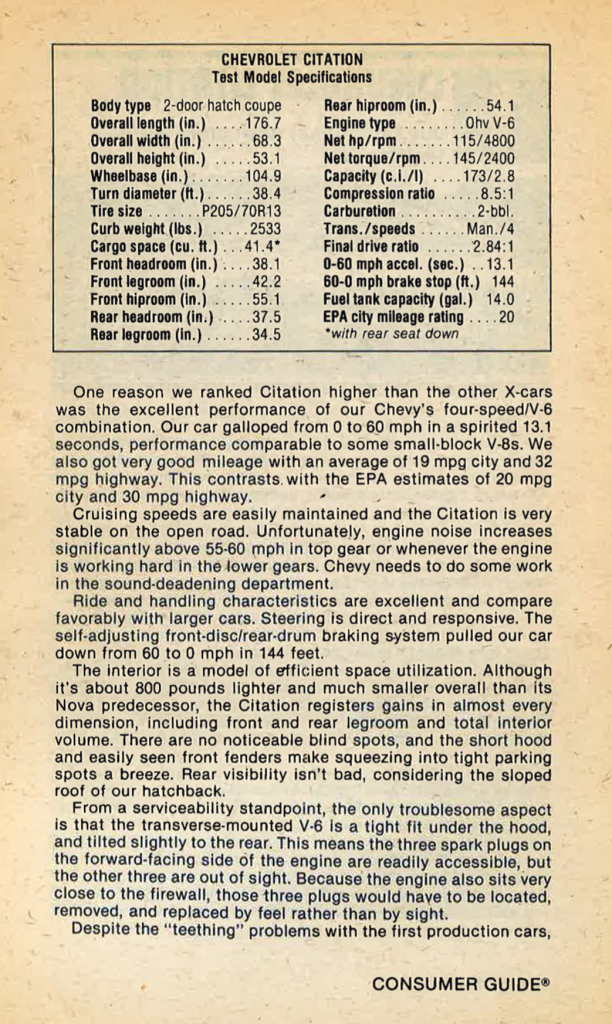 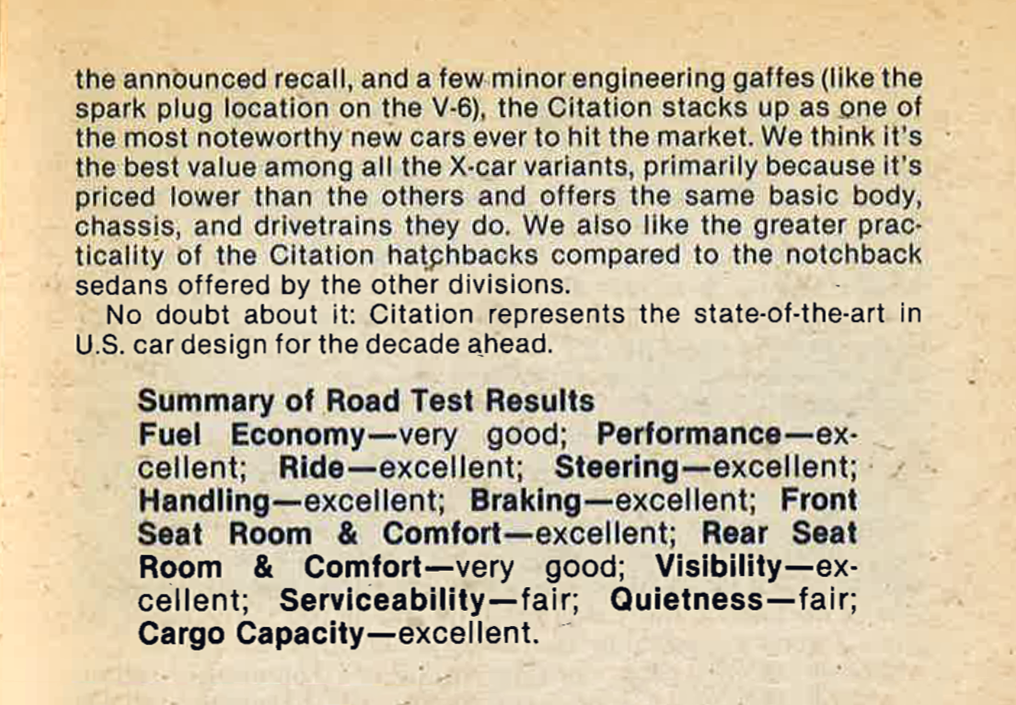 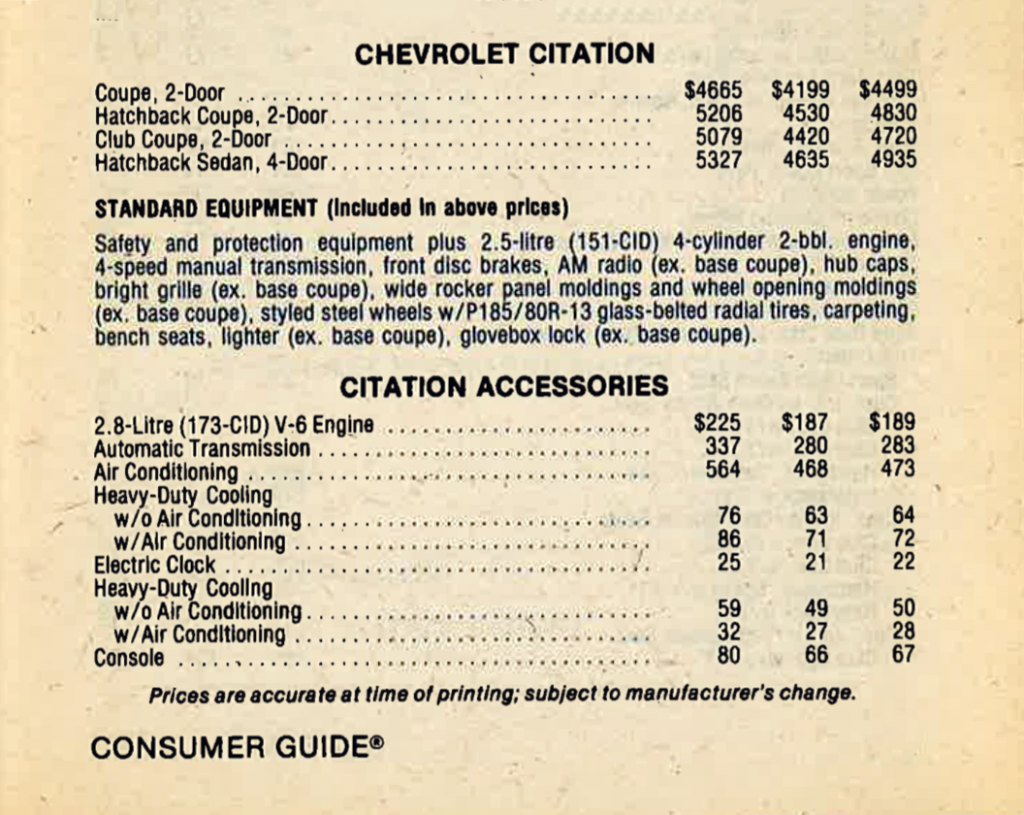 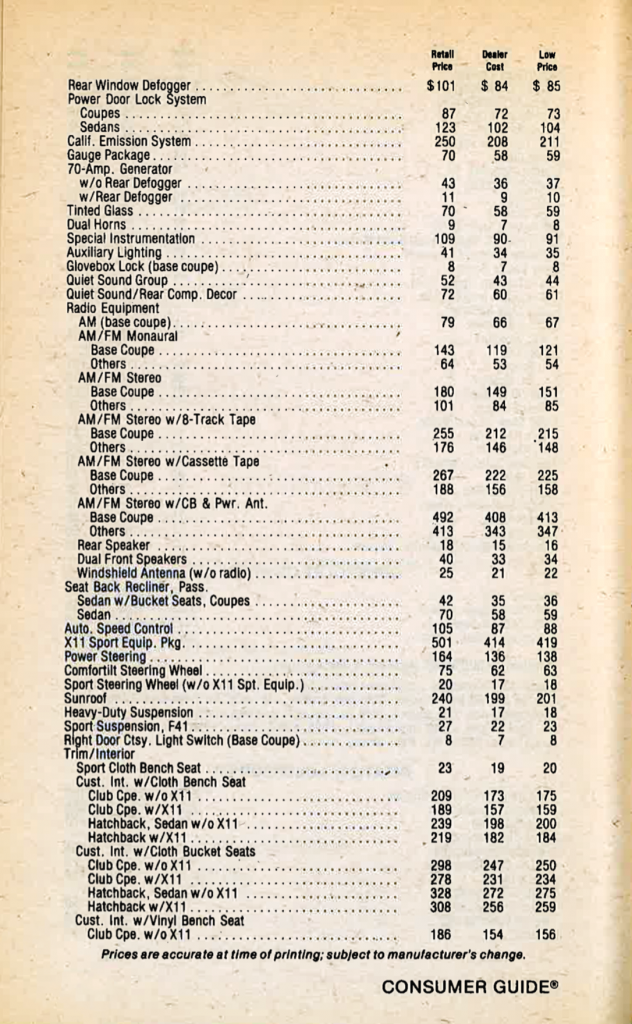