Is This the Face of Frugality? 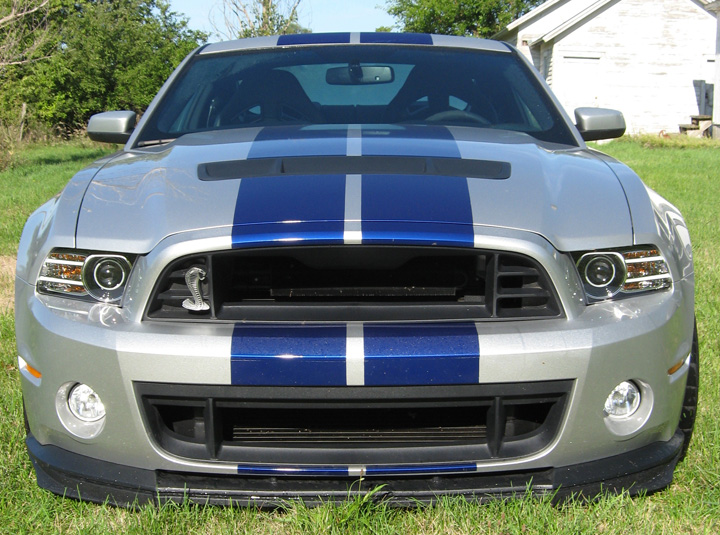 Well . . . no. But considering that accessibility to its 662 horsepower (!) is just a pedal press away, our test 2013 Ford Mustang Shelby GT 500 proved that power and economy are no longer mutually exclusive.

Ten commuting miles into what I knew would be a 300-mile weekend, the trip computer on the GT 500 said I was averaging 13.3 mpg. Gulp. My fear was that filling the tank at the end of my trip—with the required premium—would mean I’d be living on canned tuna for the rest of the month. (Okay, I pretty much live on canned tuna anyway, but I’d be forced to forgo the luxury of my usual ketchup topping.) But after hitting the highway, the mileage figure began to climb. At the end of my 307-mile trip, a fill of premium indicated I’d averaged 21.5 mpg, so this was not the gas hog one might expect.

However, let it be noted that this figure was attained in mostly highway driving and with a positively heroic level of restraint. Seldom did I fully tap all 662 horses at my beck and call, and then only in the name of testing, of course. Granted, the EPA highway estimate is an astounding 25 mpg, but I doubt that figure could be duplicated in real-world driving by anyone but a certified saint (or my 91-year-old mother), so my figure may well stand as a high-water mark for mileage in this car.

Two instances where rapid acceleration is completely warranted is in highway merging and passing. As any student of The Rules of the Road will tell you, the purpose of a freeway entrance ramp is to accelerate to match the speed of traffic (a rule of which not nearly enough drivers seem aware), so it’s really a safety issue. Sometimes, the limiting factor is the ability of the car to accelerate to freeway speeds, so it’s something we at Consumer Guide feel obligated to test.

The first such opportunity to do so arrived as I was exiting a rest area off the highway. Strictly in the name of testing, mind you, I floored the throttle. It was observed that, even on a very short entrance ramp, the Shelby GT 500 had sufficient accelerative capability to match the flow of traffic (never mind that there actually wasn’t any), whether encountered on a freeway or, say, an airport runway. In fact, a quick check of the speedometer at the end of the ramp indicated that had this exercise been observed by one of Illinois State’s finest—being unaware it was done strictly in the name of testing, of course—this missive would likely have been written from the cozy comfort of a jail cell.

Back in high school driver-training class, our instructor told us that any highway passing should be done as quickly as possible in order to limit our exposure to oncoming traffic. We were told that meant keeping the throttle floored until you’d passed the slower vehicle, even if it caused you to exceed the speed limit. I seem to recall practicing this maneuver on a local highway in the wheezing 6-cylinder AMC Matador that served as our on-road training tool. Driving behind a semi traveling at about 50 mph, we were told to pull out and keep the throttle floored until we had passed the truck and pulled back in. I dutifully obeyed, but the Matador seemed reluctant. Not so with the Shelby GT 500. In an identical simulation, the Mustang appeared able to pass a moving freight train in the time it took that Matador to pass a gas station, so any exposure to oncoming traffic in a real-world passing situation would be minimal.So, then, is this really the face of safety?

Probably not. Any vehicle that can attain thoroughly dangerous velocities in such a short period of time is certainly not the safest bet for those of inherently weak willpower. Such as basically any red-blooded American male.

One of the Mustang’s strengths—and what makes it my favorite among the small herd of ponycars—is that it just seems to exhibit better design and execution than any of the others. Visibility is surprisingly good, as are the ergonomics. Ditto the interior materials. Furthermore, ride quality on this tested uber-performance thoroughbred was surprisingly livable. So, is this the face of sensibility?

Uh . . . no. The long doors make egress a challenge in tight spaces. The deep front air dam (which probably contributes to the car’s reputed 200-mph top speed) can be broken off by the typical parking-space tire chock. And the high-performance summer tires that stick like glue on a dry August day will turn into roller skates in cold or snowy weather (meaning that those encountering such conditions should swap them for winter tires).

But it’s clear that the Shelby GT 500 (which starts at less than $55,000) is a soul-stirring bargain. Not only are its acceleration and handling capabilities bettered by few cars of any price, but the wondrous melodies emitted by its supercharged V8—even when it’s just idling or burbling along in traffic (to say nothing of the growling wail it produces under full throttle)—are truly music to the ears. So is this really the face of sheer driving enjoyment?