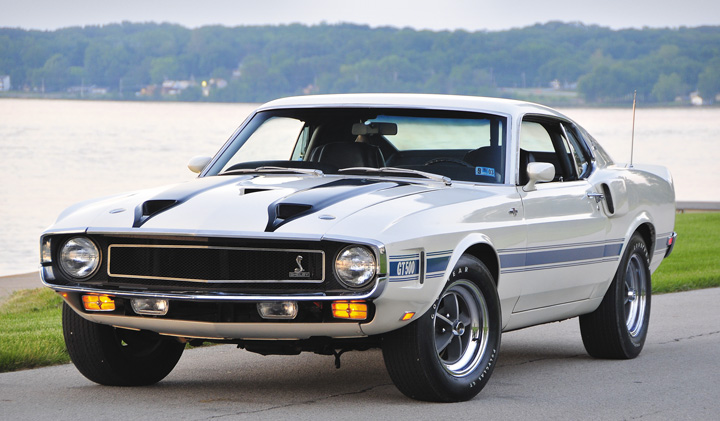 Note: This article is reprinted from the April 2014 issue of Collectible Automobile

Carroll Shelby’s—and ultimately Ford Motor Company’s—dream of building a super Mustang had been realized in full well before the last snake-badged “ponycars” were retailed in 1970. Starting in 1965 with an improved 289-cid V-8 and suspension, brake, and chassis enhancements, the GT-350 became an instant Sports Car Club of America class champion. That the white-and-blue fastback-body Shelbys looked so much like mass-market Mustangs made them great “halo” cars.

For 1967, Shelby added big-block power to the program, packing a 428-cube mill of a suspected 400 bhp under the hood of the GT-500 version (though the GT-350 remained available). Nineteen sixty-eight saw the arrival of the first Shelby Mustang convertibles and adoption of full-width taillights with sequential turn signals. A midseason upgrade came from the freer-breathing Cobra Jet 428, which caused the big-block cars to be renamed GT-500KR for “King of the Road.”

The ’70 Shelby GTs were basically ’69s with new serial numbers and two black stripes down the hood.

The excitement seemed to be coming unabated, but the pinnacle had already been reached. At the end of 1967, Shelby lost the lease on the small Los Angeles facility that he used to add the engine, chassis, and styling tweaks that turned a conventional Mustang into a Shelby. Ford, in turn, took a greater hand in affairs in order to keep its image car on the road. It dictated cushier and heavier models that were expected to appeal to a broader audience with their added amenities. 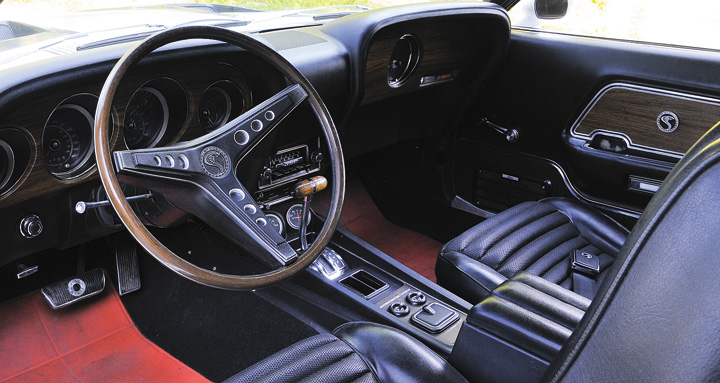 This example has NOT had the glovebox lid signed by Carroll Shelby. (Shelby was often prevailed upon to autograph collectors’ cars.)

There was one final iteration of the Shelby when the Mustang came out with a new body for 1969-70, but “Ol’ Shel” had seen enough. He had begun the Shelby Mustang effort at the request of Ford Division head Lee Iacocca, so now it was his turn to ask for something: Discontinue the car. Iacocca, now on the verge of becoming Ford Motor Company president, acceded to his wishes.

The new ’69 look sported a wide rectangular opening featuring a single headlamp at either end with a deep-set grille between them. A thin bumper matched up with hood and fender moldings to form a continuous bright loop around the front. Venturi inlets were arrayed over the fiberglass hood; scoops of different size and placement for coupes and convertibles were employed on the bodysides. 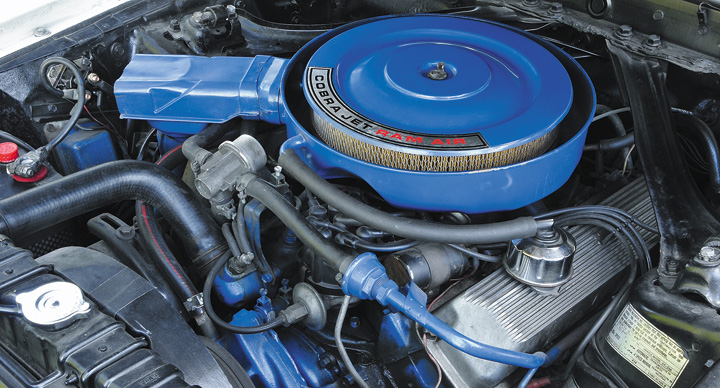 The 428 Cobra Jet engine was officially listed at 335 bhp.

GT-350s continued with a 290-bhp 351-cube engine; 500s clung to the 428 Cobra Jet officially listed at 335 bhp. A four-speed manual transmission was standard, but a three-speed automatic was available.

The unrestored Wimbledon White 1970 GT-500 seen here was owned by Ford Motor Company until 1973, when it was sold at auction to its first registered owner, Donald Rebman of Lancaster, Pennsylvania. Current owner Richard Ellis of Rapids City, Illinois, purchased it from Rebman in September 2003 after seeing the car resting under a silk parachute in the second story of a barn.