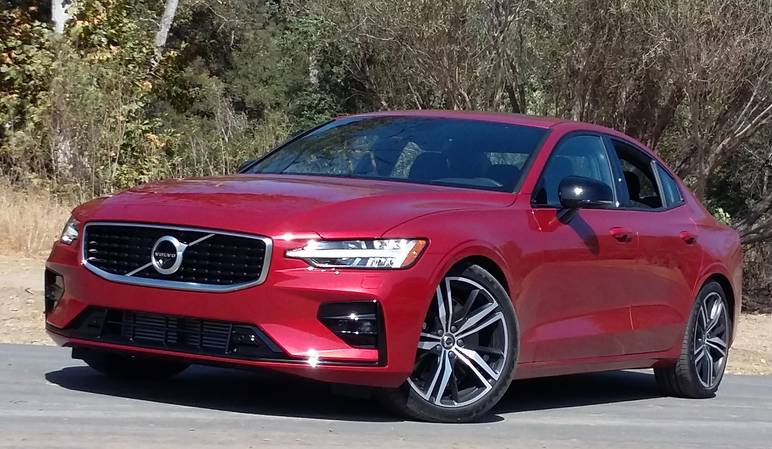 As one of the oldest members of Volvo’s reinvigorated – and fast-growing — lineup, the S60 premium midsize sedan was due for an update. And boy, did it get one.

Although a fairly clean design, the previous-generation Volvo S60 (left) looks almost dowdy compared to the redesigned 2019 version (right), which sits on the company’s “Scalable Product Architecture” (SPA) platform. The same platform hosts other Volvo models, as the only fixed dimension is the space between the bottom of the windshield and the center of the front wheel.

While still clearly a Volvo by looks, the new S60 and companion V60 wagon take on a decidedly more modern and sculptured appearance. Although front-drive cars that are also offered in all-wheel-drive form, their proportions now mimic those of rear-drive rivals, with a shorter front overhang, longer rear one, and a visibly longer hood. The wheelbase has also been stretched by almost four inches, the length by nearly five, so the car is also notably larger. And pronounced side sculpturing gives it a more dynamic profile. They are also the first Volvos to be built at a new manufacturing facility in Charleston, South Carolina, the first U.S. plant for the Swedish-based, Chinese-owned company. While the S60 is due on sale later this calendar year, the V60 wagon won’t be available until the first quarter of 2019.

From no angle could the new S60 be called “The Stodgy Swede” — as could, perhaps, some earlier Volvo designs.

Model choices continue much as before, with a couple of exceptions. The base T5 is powered by a 250-horsepower turbocharged 2.0-liter 4-cylinder engine mated to an 8-speed automatic transmission, but it now comes only with front-wheel drive; an all-wheel-drive version was offered last year. The step-up T6 again has a turbocharged and supercharged version of that engine rated at 316 horsepower and comes only with all-wheel-drive. Also having standard AWD is the new T8 plug-in hybrid, which uses the T6 engine but adds a motor to drive the rear wheels, a combination good for 400 horsepower.

Reviving a name from the past is the T8 Polestar Engineered – the hot rod of the bunch – which carries a “tweaked” T8 powertrain good for 415 horsepower, along with upgraded brakes and suspension. But there’s one caveat: Only 20 (yes, twenty) will be built this year, and all are already spoken for, though more are on the way for next year. All were sold under Volvo’s subscription program, where one monthly payment covers virtually everything from maintenance to insurance, essentially making gas the only “out of pocket” expense. The program was started last year and applied to certain Volvo models, and this year includes the new S60 and V60.

Within the T5 and T6 lineups are three trim levels — Momentum, sporty R-Design, and “luxury” Inscription, with the T8 only offered in R-Design and Inscription form — along with several individual options and option packages. Note that while we briefly drove a V60 wagon, we won’t get pricing for those models until closer to their early 2019 on-sale date. 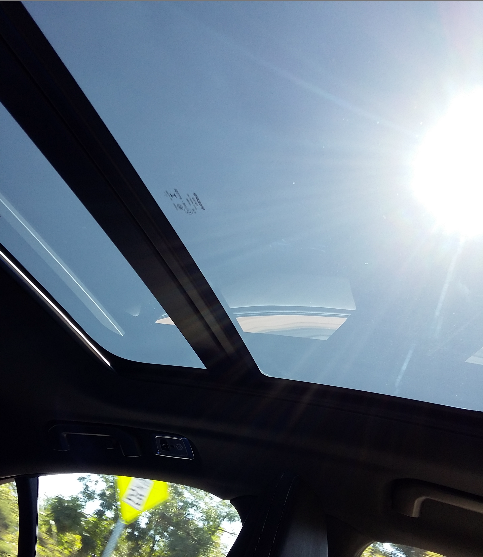 Among the long list of unexpected standard features is a huge panoramic sunroof.

Added on the $42,895 R-Design are the contents of the Premium and Multimedia packages along with unique interior and exterior trim, steering-wheel paddle shifters, and front fog and cornering lights, with the Advance Package being optional, along with Volvo’s Four-C adaptive suspension and a Bowers and Wilkens audio system.

Jumping up to the $43,895 Inscription gets you leather upholstery, 4-zone climate control, and a cooled glovebox. Options include the Advance Package along with a $2200 package that includes Nappa leather upholstery and ventilated/massaging front seats with extendable cushions.

What we mostly drove at the preview in California was a loaded S60 T6 Inscription, but most of this evaluation would apply to any S60 T6. And the V60 driven was a T5 Momentum, and powertrain comments should hold for the S60 T5s. 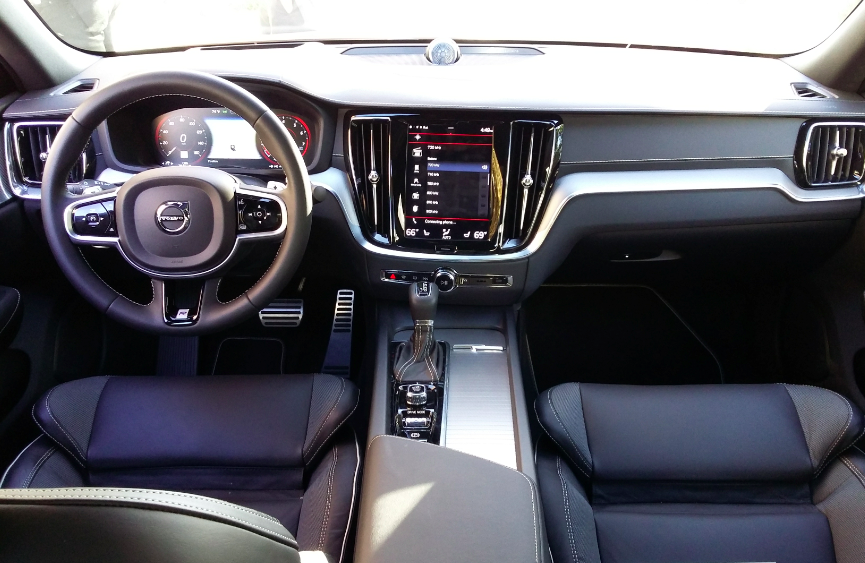 Upon entering the tested S60, we were greeted with a combination of two-tone interior and ritzy trim (rich-looking wood available) that clearly labeled it as a “premium” vehicle. Visibility is good to the front, poor to the sides (due to close, thick roof pillars), and just fair to the rear corners, though our tester was equipped with power-folding rear headrests, a wide-angle 180-degree rearview camera, and 360-degree cameras, all of which help when backing. 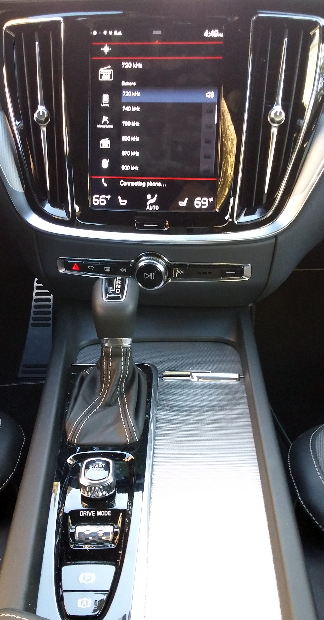 The huge center touchscreen is the same as that used in other Volvo vehicles of late. There’s a steep learning curve to figuring out its complexities, and even then, some actions take longer to execute than they should.

Audio and climate controls are now the same as those used on other Volvos, with most features being adjusted through a huge, vertically oriented center touchscreen with cell-phone-like swipe capability. Although not our favorite due to the complexity of accessing some features quickly, it’s something that probably gets easier the more you use it.

Interior storage space is average at best. There’s a good-size glovebox, but otherwise just a couple of covered cupholders, two modest-size covered console bins, and map pockets with cupholders in the doors. (Note that a T8 Polestar Engineered we drove briefly had even less interior storage space due to a smaller glovebox and smaller console bins.)

Better is passenger space. There’s very good headroom and legroom available in front, and the driver of our T6 Inscription could enjoy 4-way power lumbar adjustment along with position memory. However — unlike in some premium cars — the tilt/telescopic steering wheel has manual adjustment, which means it can’t be included in the seat-and-mirror memory settings. Note that the paddle shifters (for manual transmission-gear selection) behind the steering wheel were so close to the rim that my co-driver hit them accidentally a few times, which made the transmission refuse to upshift through the gears for no apparent reason.

There’s likewise good room in back. Six-footers should find sufficient headroom, and they’ll only be short on legroom if the seat ahead is pushed all the way back — and only the very tall would need to do that. Note, however, that the center floor tunnel is quite large, meaning a center passenger is going to be short on foot space. 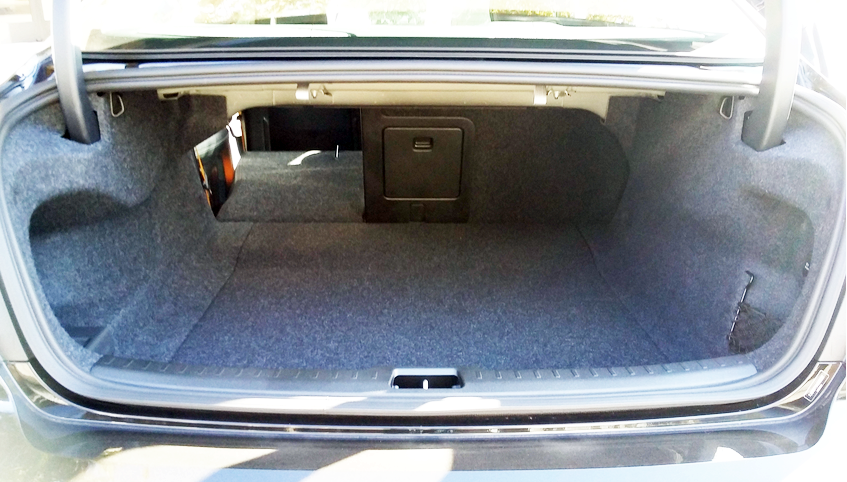 It may just look like a black hole to some, but the trunk is actually one of the S60’s better competitive features. Folding the rear seat backs leaves a nearly flat floor — with just a very slight rise at the rear of the trunk — allowing long items to be easily slid forward; in most rivals, folded rear seats leave a pronounced “step.”

It’s in cargo room, however, where the S60 shines — or perhaps more accurately, in cargo versatility. While most sedans have folding rear seat backs, few have seat backs that fold level with the trunk floor; instead, they usually rest a few inches above the trunk floor, forming a “step” that makes it difficult to slide long items forward. But while the S60’s folded seat back isn’t completely level with the cargo floor, it’s close enough that sliding long items forward shouldn’t pose any problem. While the trunk is also wide at the rear and reasonably spacious, note that sickle-shaped trunklid hinges dip into the load area, and there’s very little hidden storage under the floor (and virtually none in the T8 Polestar Engineered driven). Minus the sickle-shaped hinges complaint and with far more cubic cargo space, the above also applies to the V60 wagon.

If the term “Volvo Wagon” gives you visions of one box set on top of a bigger box, the new V60 will come as quite a shock. Newly — and exclusively — available on the base V60 Momentum is tartan plaid cloth upholstery (right).

While many premium-midsize rivals still offer larger 6-cylinder engines, 4-cylinder turbos are increasingly becoming standard. Particularly in standing-start acceleration, most of those small turbos don’t have the kind of instant throttle response of a six, which is one reason people might move up to a premium sedan (over a “regular” one) in the first place. Volvo’s 4-cylinder engine sort of sits between the two, at least in T6 form. Why? Because while the T5’s engine has only a turbocharger — like all other turbo fours in the class — the T6’s has both a turbocharger and a supercharger, a unique combination. As such, it has better low-end response than most rival fours, (and even the T5 is quite good in terms of throttle response), making it a fine “tweener” choice. Unfortunately, the 8-speed automatic transmission is not always quick to downshift to a lower gear when the throttle is floored at speed, though — for some reason — it’s better if you just dip into the throttle a bit. 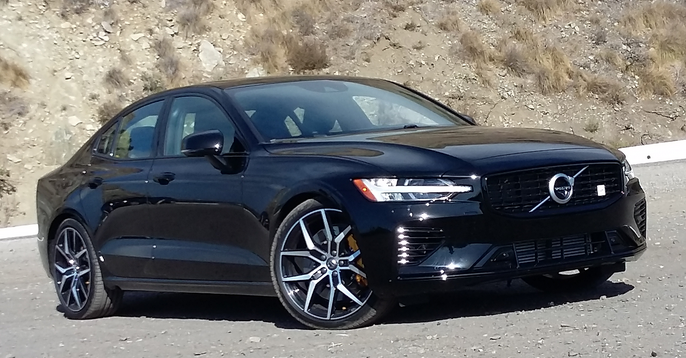 Although Volvo isn’t really known for performance, the S60 Polestar Engineered may well change that. Based on the T8 plug-in-hybrid powertrain, the Polestar’s is tweaked for a few more horsepower (415 vs. 400) and is joined by performance-oriented suspension and brakes. But the ones we tested were really just “teasers,” as additions to the 20 already sold won’t arrive until next summer.

Then there’s the T8. Unlike some others of the ilk, the car’s plug-in hybrid technology is not aimed at fuel economy as much as it is at power. And if the Polestar Engineered driven is any indication of what the only-slightly-less-powerful T8 will do, it should be able to rival many of the big “sport sedan” names in terms of performance.

Although our Southern California test route didn’t offer much in the way of potholes to judge ride comfort, it seemed as though this is an S60 strength. Handling felt to be on par with others in the class, which is to say, quite good.

While Volvo built its reputation on safety, the T6 version of the S60 in particular — with its stronger engine, all-wheel drive, and good feature-per-dollar equation — comes off as a bit of a performance-sedan bargain. That makes it an appealing entry in the class and the most compelling choice in Volvo’s midsize lineup … at least until the rakish V60 wagon appears.

Along with deeper side sculpturing, changes to the proportions of the 2019 Volvo S60 give it a decidedly rear-wheel-drive (read, “sporty”) profile like nothing the company has produced of late. Add in a long list of standard features, reasonably strong powertrains, and value pricing, and this is a car that should give buyers (and class competitors) something to think about.