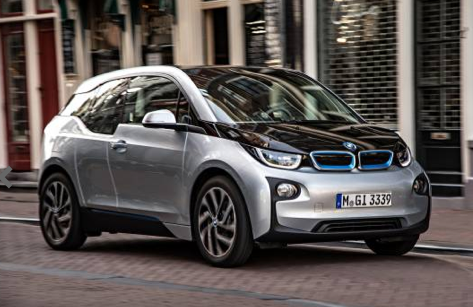 Rick sneaks into a consumer event to drive BMW’s new electric i3. Seems regular buyers are treated a lot like members of the media.

Technically, I wasn’t invited. But a (much more affluent) friend was offered the chance to drive a 2014 BMW i3 at a local BMW dealer and was told a guest was welcome. So I was essentially there “incognito,” courtesy of the good graces of another.

Turns out we were not alone. In fact, it was kind of a gala—one for which I was decidedly underdressed. (However, it later became apparent that most of the many “suits” were salespeople and dealership folk, as the other civilians who braved the bitter cold to get there were likewise dressed in jeans … though I doubt theirs came from Farm & Fleet.) 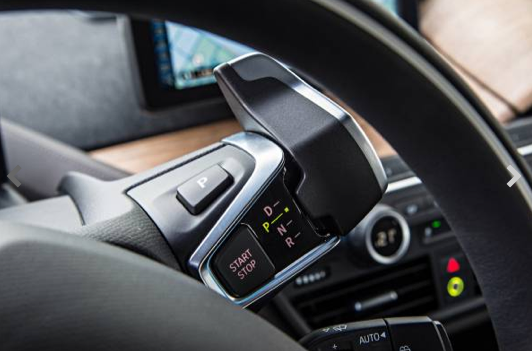 Odd “shift dial” takes some getting used to, but works well.

Unlike most there—based on questions I overheard—this was not my first exposure to the i3. However, my initial contact was just a static reveal of the car last summer, so this would be my first chance to get behind the wheel.

After signing away my life and any future offspring (not on a common piece of paper, mind you, but rather on a techy little iPad), we were ushered into an i3 waiting at the curb. I drove first. Getting in and “starting” (actually more just “turning on”) the car wasn’t too different than in other electrics I’d driven, but putting it in Drive took some study.

Oddly, the “shifter” wasn’t quirky in the same way other BMWs are; it had a quirkiness all its own. Protruding from the right side of the steering column—about where you’d expect to find the wiper stalk—was a large dial. Rotating it down engaged Reverse, rotating it up put you in Drive. As with some other cars, Park was activated with a separate button on the top of the protrusion that carried the shift dial. Although it could be a bit perplexing at first—and a bit awkward to put into Park—it worked just fine and quickly became second nature.

The same could be said about the way the car drove.

A few years back, I had the opportunity to test the Mini E, a very low-production, lease-only, all-electric version of the Mini Cooper. (Mini, by the way, is owned by BMW.) At the time, the company pointed out that the car’s primary purpose was to serve as a test bed, not only for the electric technology, but also for how people used their electric cars, and what they liked and disliked about them. 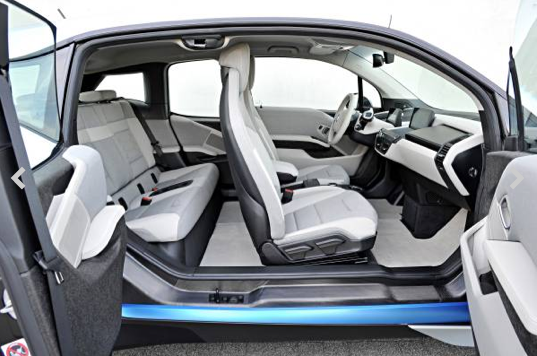 The i3’s interior is quite spacious for such a small car. Rear-hinged rear doors are similar to those used on some extended-cab pickups.

One thing that really stood out about the Mini E was the severity of regenerative braking that could be dialed in. Most electric cars have some; they tend to slow down more quickly than gas cars when you lift off the throttle, as that’s regenerating electric power that helps recharge the battery. But the Mini E produced a whole new level of whoa. Not only did a sudden lift-off slow you down far more quickly than you’d normally want to do in traffic, but it could bring you to a complete stop without ever touching the brake. (All other electrics make you hit the brake below about 5 mph.) As a result, you had to modulate how quickly you lifted—and how far—in order to come to a smooth and gradual stop. Startling as that was at first, it quickly became sort of a game—a challenge—to gauge it right. And once it was mastered, you essentially drove using only one pedal.

So it wasn’t a complete surprise when the i3 turned out to be the same. Furthermore, like other electrics, throttle response is virtually instantaneous with pedal movement (electric motors react almost instantly, and there’s essentially a one-speed transmission, so no wait for a downshift), which is terrific in the cut-and-thrust of city driving.

The i3 also rode surprisingly well. Like other electrics, it has a low center of gravity due to the rather heavy battery being mounted beneath the floor, so that allows the car to have a softer suspension without suffering the normally resulting body lean. But at least over the somewhat pockmarked streets we drove, the i3 seemed to ride better than most, perhaps the result of its unusually large-diameter tires simply gliding over small depressions.

Inside, the i3 makes good use of its tall built to provide plenty of headroom, front and rear. Legroom is also quite good. It’s in cargo space that the short car falls … well … short. In front there’s a very small but usefully cubic trunk (the motor is in the back, under the cargo floor), and space behind the rear seat is minimal. However, the rear seat backs fold flat and level to expand the space, and a fair amount can be carried in that configuration. 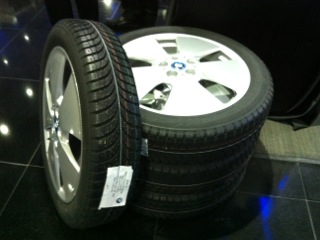 The i3 is fitted with very tall, narrow tires–155/70 19s–and on display were some winter tires available in that odd size.

Size-wise, the i3 stretches a subcompact-like 154 inches stem-to-stern and weighs about 2650 lbs. From the info we were given, range was listed as 80 to 100 miles, horsepower at a rather exuberant 170. (By comparison, the all-electric Nissan Leaf is 20 inches longer, about 650 lbs. heavier, has an EPA-estimated range of 75 miles, and has but 107 horsepower.) Furthermore, it appears the i3 is going to start at about $41,350 plus destination (vs. $29,000 for a Leaf with far less standard equipment). However, those prices don’t include tax credits that will likely continue for 2014: $7500 federal, and in Illinois, a potential $4000 state tax credit. (Not everyone is eligible for either, so it’s best to check with your tax accountant.)

In a way, the event was a wildly compressed version of what might occur at a typical press preview: snack on a few hors d’oeuvre, drive a cutting-edge car. Except that this one was sort of a clandestine operation.