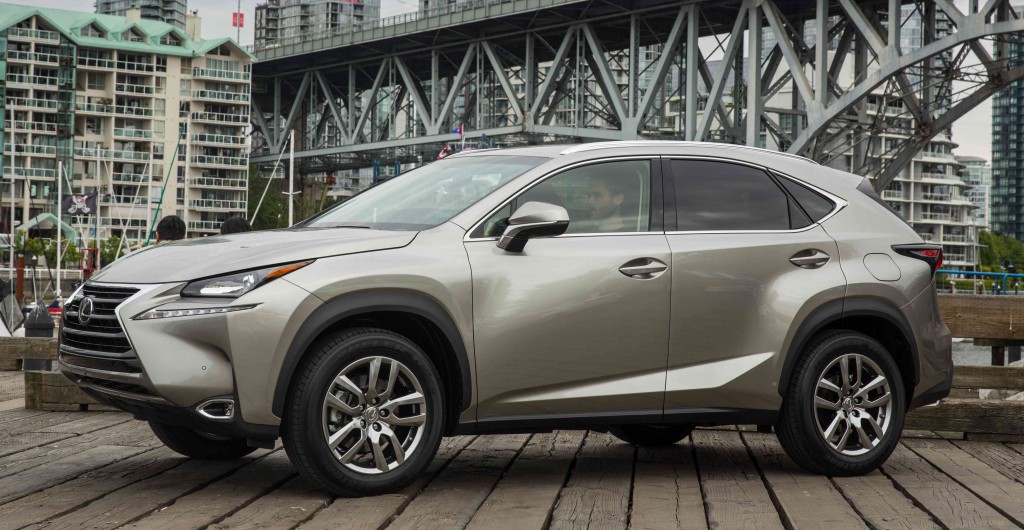 Lexus enters the premium compact-crossover fray with the 2015 NX. An NX 200t is shown here.

Lexus is expanding by going smaller for 2015. The luxury-brand automaker is adding a fourth member to its lineup of sport-utility vehicles, but this newest one—the NX—is the smallest of them all.

Available with a turbocharged 2.0-liter 4-cylinder gasoline engine or as a gas/electric hybrid centered around a 2.5-liter four, the 5-passenger compact crossover is “loosely connected to the [Toyota] RAV4,” according to Takeaki Kato, chief engineer for the NX. With similarities mostly confined to the floor pan and other inner-body architecture, only about 10 percent of the NX is shared with its corporate cousin, Kato said.

The NX 200t’s 2.0-liter engine, the brand’s first turbocharged gasoline powerplant, is hooked to a new standard 6-speed automatic transmission. Meanwhile, the continuously variable transmission that serves the 300h hybrid newly incorporates a kickdown feature for improved getaway when required. Other notable features that bow with the debut NX include a charging tray for wireless charging of compatible mobile phones and devices, and a touchpad-controlled Remote Touch Interface (RTI), both of which are optional. So, too, is the subscription-based Lexus Enform Remote app that allows owners to lock and unlock doors, stop or start the engine and climate controls, and monitor “guest driver” behavior from their iOS or Android devices.

Both NX models are available in a choice of front-wheel or all-wheel drive, albeit with two different systems for the latter. Dynamic Torque Control, the AWD system in the 200t, relies on an electromagnetically controlled coupling in the rear differential to automatically engage all-wheel operation when needed. In normal driving, all available torque is directed to the front wheels, but up to 50 percent of torque can be channeled to the rear when the need arises. The 300h’s E-Four system uses a separate electric motor to drive rear wheels when necessary—there is no direct linkage between the front and rear drives. The rear motor also acts as a generator during regenerative braking, increasing the amount of recovered kinetic energy. 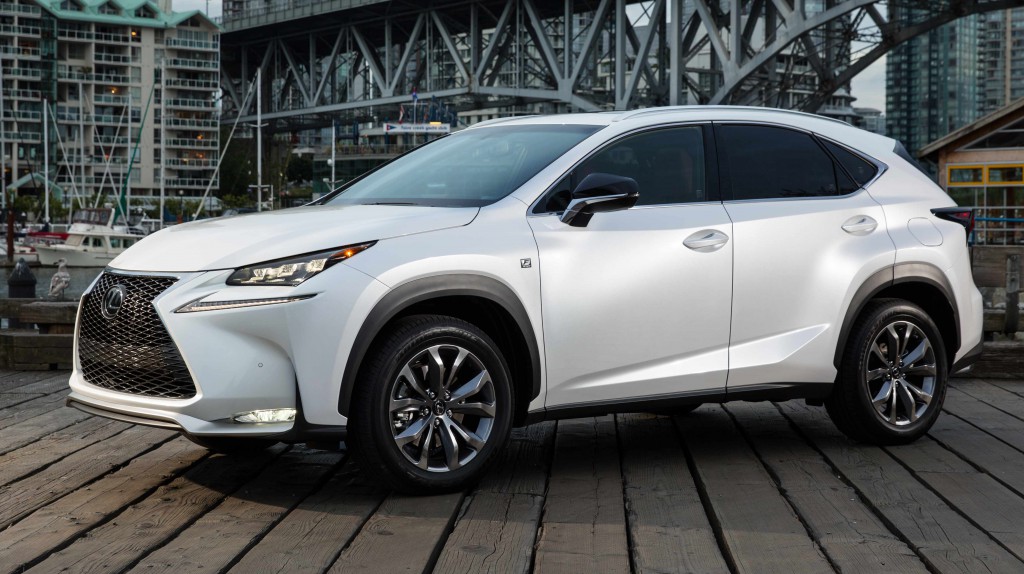 With the F Sport package, the NX200t picks up unique trim, a firmed-up suspension, and F Sport-specific 18-inch wheels.

Suspension consists of MacPherson struts in front and double wishbones with trailing arms in the rear. Coil springs are used at all four corners. An F Sport option package for the 200t includes a tuned suspension with stiffer bushings and additional stabilizer bars front and rear, both with an oil-filled piston at the center to absorb shocks and stanch noise and vibration. The trio of preproduction NVs that Consumer Guide® sampled on a press preview displayed nice ride and handling characteristics. Rolling on 18-inch alloy wheels (in place of the standard 17s), the F Sport set-up is a little tighter, but hardly “high-performance vehicle” stiff. We doubt few would fault it if it were the base suspension arrangement. Grip was good with all-season and summer tires; we barely heard a squeal of protest while winding up and down twisty hillside roads around Whistler, British Columbia, Canada. In normal driving, though, the summer rubber did issue a bit more noise.

The suspension components are attached to a unitized high-strength-steel body structure. Assembly methods picked up from the new Lexus IS sedan like strategic use of body adhesives, laser screw welding, and added spot welds throughout the body shell are intended to add stability and reduce noise, vibration, and harshness. The manufacturer claims the NX is 20 percent stiffer than the RAV4. Indeed, in our test drives, we found the little Lexuses to be fairly quiet and rattle-free.

Both engines employ variable valve timing to help them slip into Atkinson-cycle operation, which alters intake-valve operation for better fuel efficiency—and, thus, economy with some sacrifice of power—under reduced load. The 235-horsepower four features a Lexus-built turbocharger and an air-to-liquid intercooler. When called upon to fully deliver, the 2.0-liter engine is responsive with very slight turbo lag; with 258 lb-ft of torque available between 1650 and 4000 rpm, it delivered good passing power in our tests. The 300h is not bad in the power-delivery department, either. The naturally aspirated 2.5-liter four delivers 154 horsepower by itself, with a total system rating of 194 horsepower when the electric motor lends a hand. The crossovers from electric to full-gas operation and back are practically seamless.

Lincoln’s thinking small, too. Check out our review of the 2015 MKC crossover

All models can be set, via a console dial, for “Normal,” “Sport,” or “Econ” modes. The system tailors throttle response and power-steering assist (but not suspension damping) to the task. In Econ, low-speed acceleration will be more leisurely in normal operation, but if an emergency situation calls for faster action, a good tromp of the pedal will override the setting and the engine will respond in full.

Our preview drives did not permit us to test for fuel mileage. Lexus estimates are a combined city/highway 24 mpg for the 200t and 32 mpg (with AWD) or 33 mpg (with front drive) for the 300h. 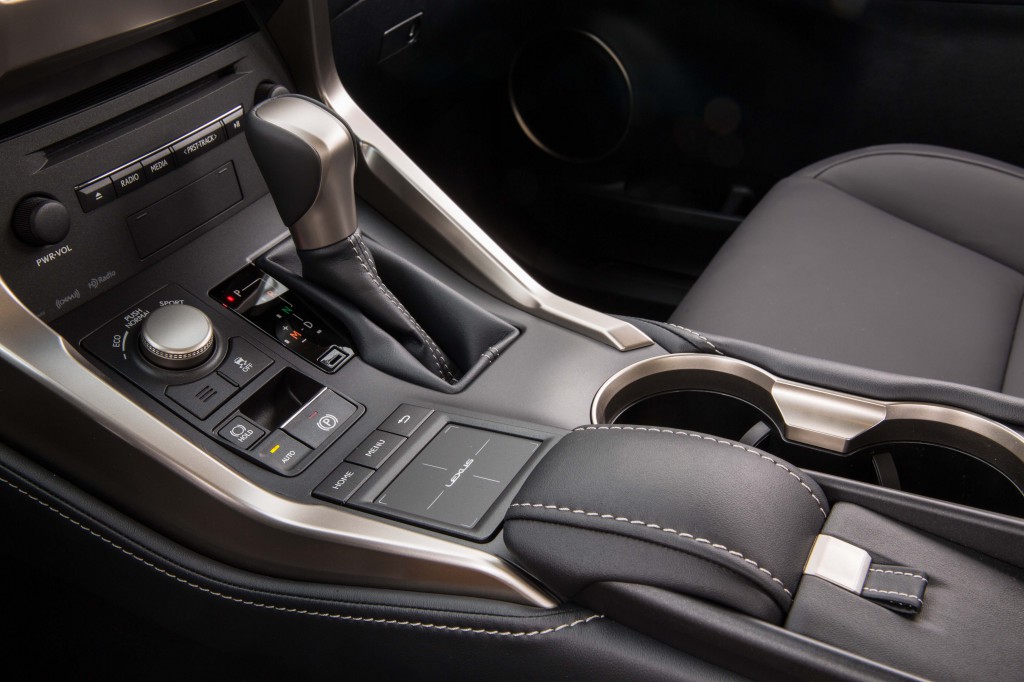 A Lexus first is the NX’s optional Remote Touch Interface (RTI) control system, which works much like the thumb pad on many laptop computers.

The new RTI central controller included with the navigation option package offers more-intuitive touchpad operation on the center console. Like a tablet or smart phone, it allows users to “pinch,” double tap, or push to access info or change views on the 7-inch display screen in the top center of dash. The touchpad is a little easier to use than Lexus’ usual “joystick” system (which is still used in NXs without navigation), and sensitivity is adjustable, but it still demands some attention from the driver. Climate and some radio settings can be set via buttons on the center stack, but they are displayed on the screen. When we did a simple test of the standard voice-activated controls, requesting several different radio stations, the system responded very well. 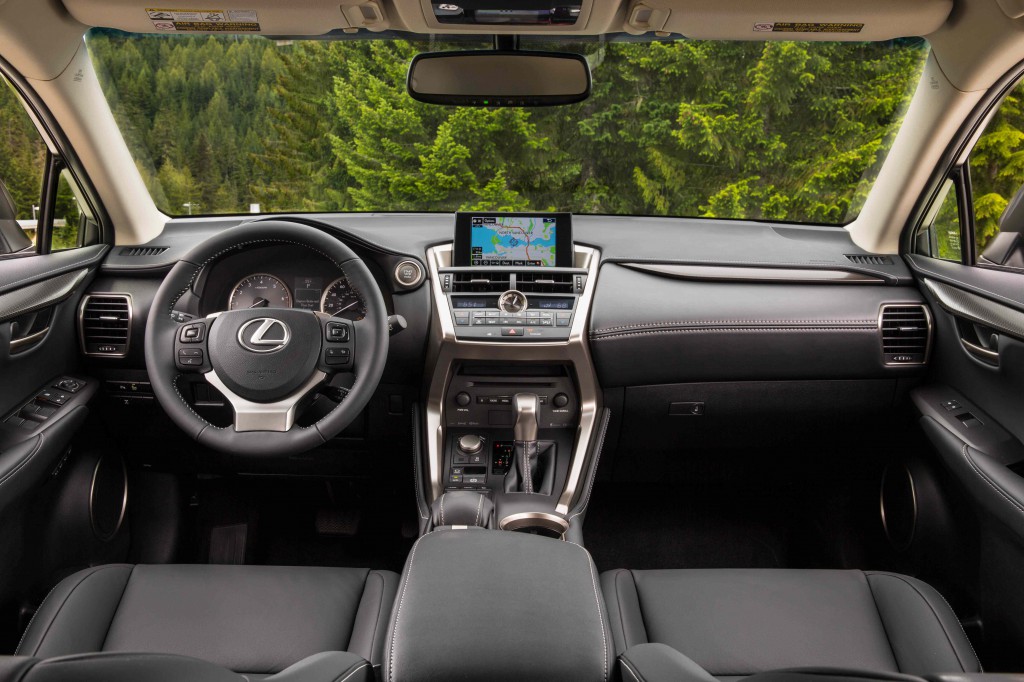 Current Lexus owners will find the NX’s interior familiar in look and feel.

There are two genuine analog dials for tachometer and speedometer, between which programmable vehicle information appears on a thin-film transistor display. With the F Sport package, the dials have distinct graphics, the multi-information display includes a turbo boost gauge and a g-force meter to register lateral and longitudinal forces, and “Active Sound Control” allows the driver to dial up the exhaust sound volume in the cabin for a sportier ambience.

In the models we drove, materials had nice look and feel—though genuine leather seats come only with the top-end almost-all-inclusive option package. Accent trim on the dash and doors is either faux-composite, metal, or wood depending on how the vehicle is outfitted. The design of the metal-trimmed center stack that encompasses auxiliary controls seems to reprise the current Lexus “spindle” grille design.

Smaller still: check out our review of the tidy Buick Encore crossover

Front head and leg room are very good, and seats are supportive, especially in F Sports, which have their own design. Rear seats are positioned a little higher than the front seats. Head room is acceptable for 2 adults. Three children will fit across the rear seat. Triangular rear-quarter windows let in some light, but the sloping roof pillars are still thick, impeding over-the-shoulder visibility. The view directly to the rear is hemmed in by rear head rests.

There’s decent rear cargo space that loads at bumper height with no lip to have to lift over. For additional hauling capacity, rear 60/40 seats fold, albeit not quite flat. The rear cargo cover is a panel that easily folds and stows atop the spare tire under the cargo floor when not needed. Interior storage starts with an ample glove box. An accommodating covered console cubby houses USB and power ports. Inside, there’s also a sliding change tray or, when ordered, the phone-charging pad. (The latter does block access to the console box when in place.) Front-door pockets include room for a bottle, but rear pockets are just bottle-sized. Pouches are attached to the backs of the front seats. A pull-down center arm rest in the rear seat incorporates twin cup holders.

The NX is expected to be on sale in the U.S. in November. Though exact prices have not yet been announced, Lexus officials say they will be in line with competitors that include the Mercedes-Benz GLK, BMW X3, Audi Q5, and Acura RDX. They currently start between about $35,000 and $38,500, with the Mercedes, BMW, and Acura charging more for all-wheel drive. The manufacturer anticipates 90 percent of sales will come from the 200t.