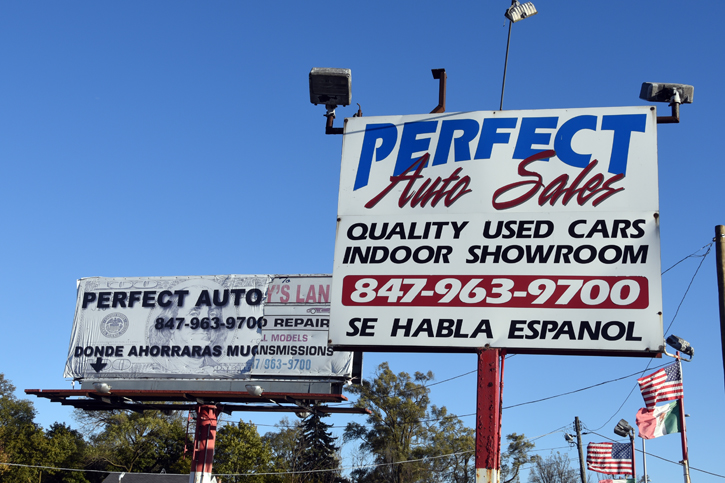 Once home to sleazy bars and adult-entertainment venues, Rand Road outside of Palatine, Illinois, is now populated by a dozen or so small used-car dealerships.

The village of Palatine, Illinois, isn’t much worth knowing about unless you live there. A relatively contemporary Chicago suburb today, the community dates back more than 150 years, though it was best known for most of its first century as a lightly used rail stop utilized mostly by local farmers.

Like most Chicago suburbs (and Chicago itself), Palatine falls under the jurisdiction of Cook County, a governance that brings notably higher taxes, but also a certain amount of order, safety, and general homogenization.

But as Palatine is situated at the extreme northwest corner of the county, village residents are just minutes from the lawless badlands that are unincorporated Lake County.

Route 12—known locally as Rand Road—was once the primary artery connecting Chicago to Wisconsin. Route 12 pierces Palatine on its north end, and weaves a northwest course into the wilds of Lake County, eventually reaching the Dairy State.

When my family moved to Palatine in 1973, the strip of Rand Road just outside of Palatine was thick with windowless taverns, gentlemen’s clubs, and adult bookstores. Signage for these establishments, as I recall, was limited to the painted plywood fasciae of the establishments, and a few of those rolling impermanent billboards with big neon arrows on them that get towed from business to business.

Intermixed with the venues of vice were the occasional big-truck repair shop, a few unbranded service stations, and a law-enforcement nightmare called the Rand Motel. Also found on Rand Road was a collection of used-car dealerships—none of which was branded, and none of which ever had more than a dozen vehicles in inventory.

As Lake County came into its own, the government—and likely the residents—worked to move the seedier businesses off of Rand, and by 1990 or so, only a single strip club remained.

What was left were the repair shops and the used-car dealers. Indeed, the car stores flourished, having found an otherwise neglected customer base to service: Spanish-speaking Palatine residents.

Times have changed, however, and Palatine’s Hispanic residents have developed transportation tastes not unlike the general population. Thus, the Rand Road dealers today mostly stock late-model crossovers, but there are still pickups to be found, as well as the occasional high-mileage luxury sedan.

These stores aren’t as seedy as they once were, but there’s still a whiff of the plaid-jacket-style hucksterism that once permeated the Rand Road dealer row.

I wish I had taken it upon myself to photograph this area ten years ago, as the character of the area is slowly being sanitized away. In fact, an enormous new Toyota store now dominates that stretch of road. For what it’s worth, here are a few recent photos of what’s left of Palatine’s once infamous Rand Road area.

If you live near a stretch of small, unbranded used-car lots, tell us about it. The place to leave comments is down below. 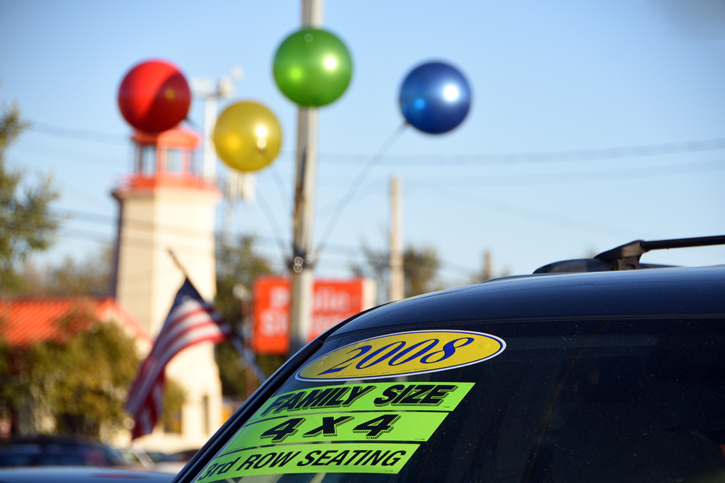 While new-car dealerships typically focus on used vehicles that are around three to five years old, the Rand Road dealers focus on more-affordable cars and trucks that are closer to a decade old. 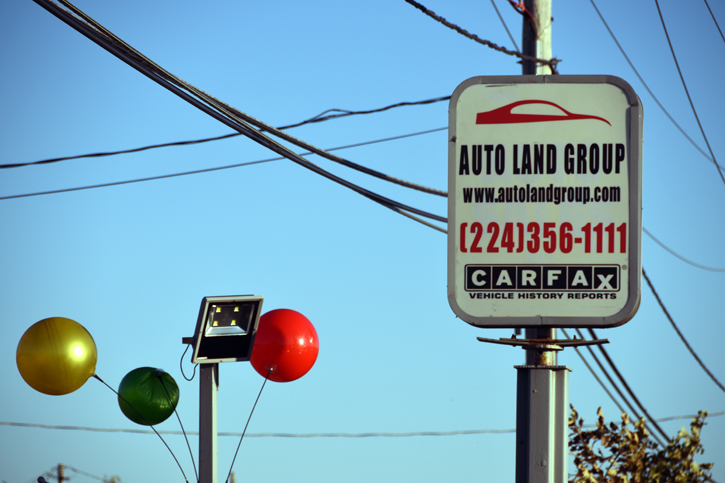 As their shoppers become more market-savvy, even small used-car lots have been forced to modernize. This store’s Carfax signage (likely unlicensed) is a clear acknowledgement that its customers are becoming more sophisticated. 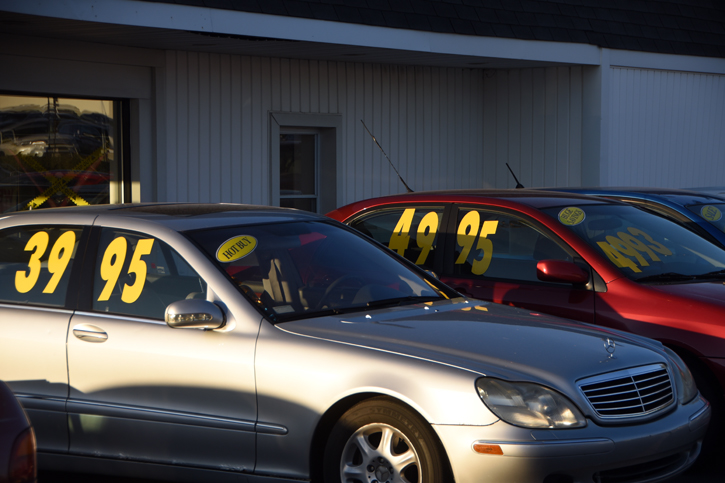 Well-used German luxury cars were once a common sight on Rand Road dealership lots. These aging Teutonic flagships are less common these days, though at under $4000, this fair-condition Mercedes-Benz S-Class will likely find a bargain-hunting, risk-tolerant buyer. 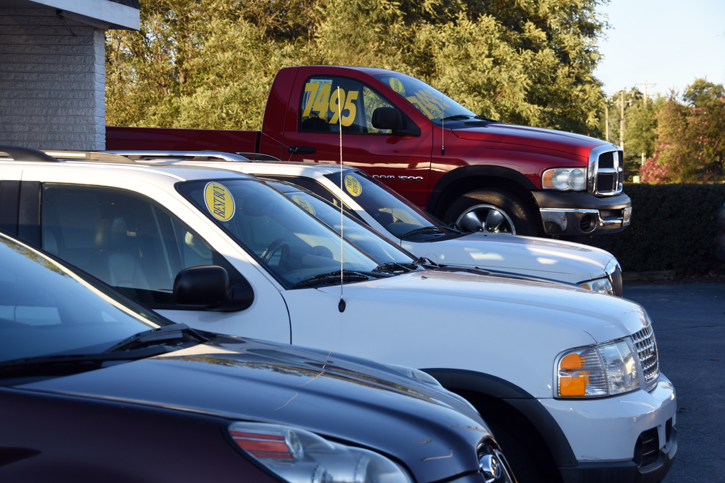 Good-condition pickup trucks were a staple of the Rand Road dealerships a decade ago. A maturing, increasingly family-oriented buyer base means that these stores now traffic mostly in more passenger-friendly vehicles. 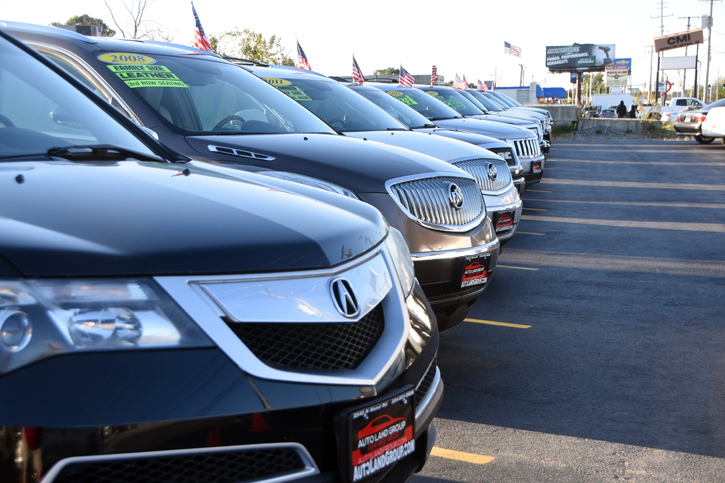 The inventory at this Rand Road store is not much different from the used vehicles you might find at the average Ford or Chevrolet dealership–though these crossovers are likely a little older and higher-mileage. 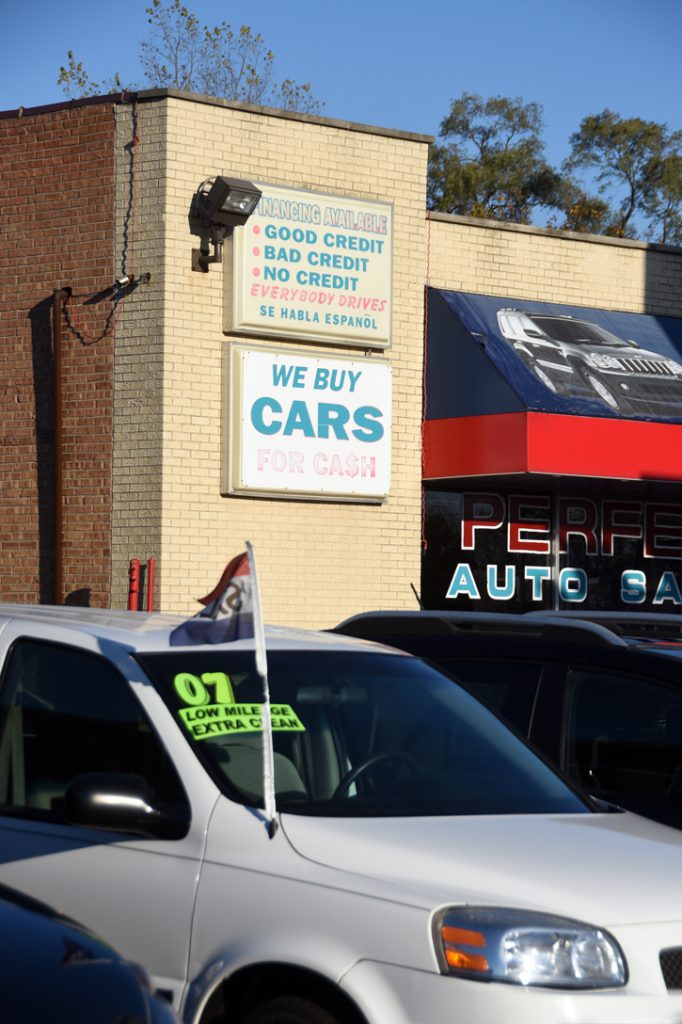 For some shoppers, getting financed in the first place is more important than the actual vehicle being financed. Dealerships like this one rarely deal in vehicles with fewer than 100,000 miles on the odometer. 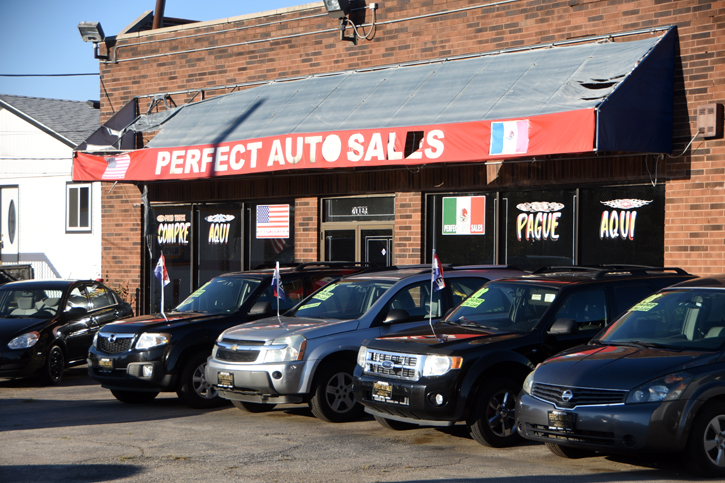 The average age of a vehicle on this particular lot was about ten years old. 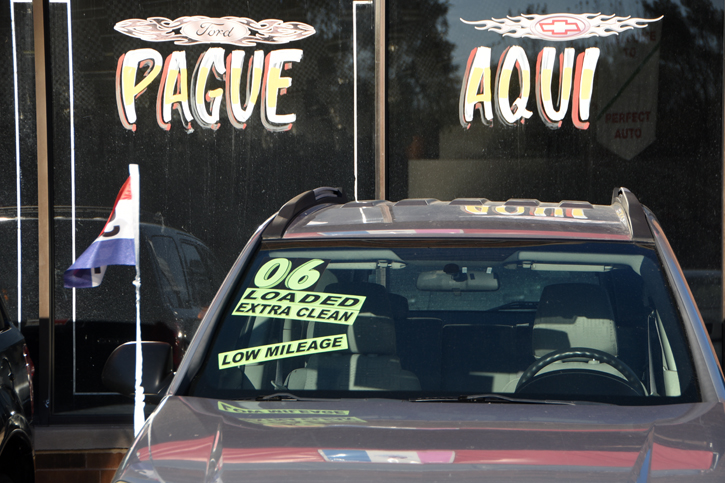 For those of us who have forgotten our high-school Spanish, “pague aqui” means “pay here.” For seriously credit-impaired shoppers, “buy here, pay here” plans represent the only way to purchase a vehicle. These arrangements often include weekly in-person cash payments. 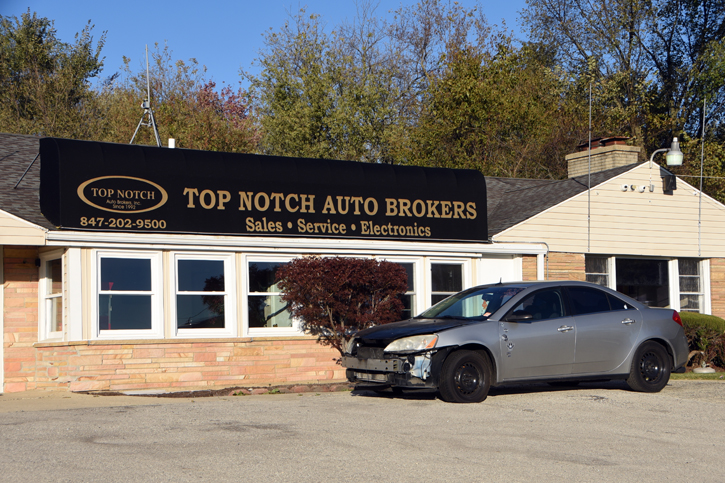 I’m going to suggest that the trashed Pontiac G6 seen here isn’t doing much to support the notion that this dealership is “Top Notch.” 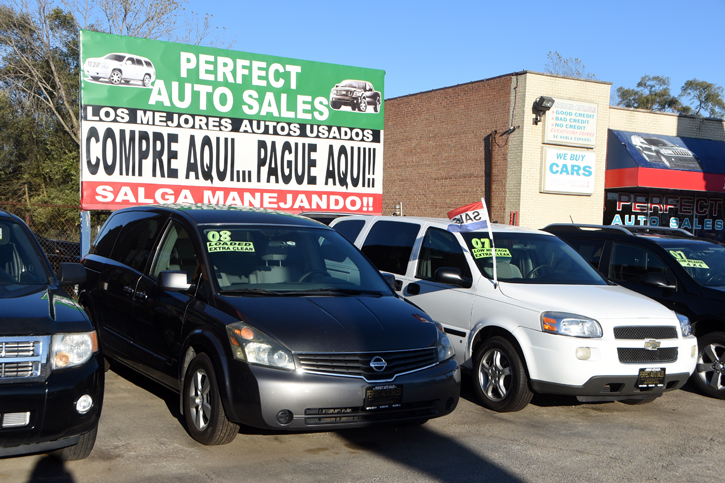 Answering the question, “Where have all the Nissan Quests and Chevrolet Uplanders gone?” 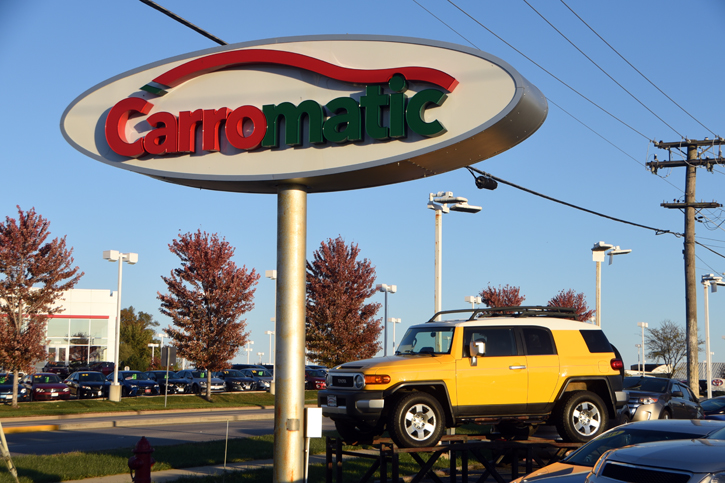 Thanks to its hip-looking signage, this dealership has taken on a certain franchise respectability. As it turns out, Carromatic is not a franchise. A massive new Toyota store can bee seen across the street from this lot. 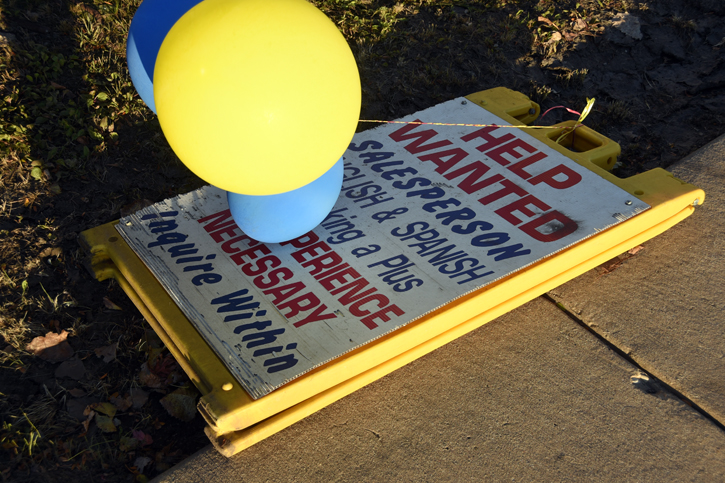 We have no data to back this up, but it’s likely that salesperson turnover at these Rand Road dealerships is fairly high. 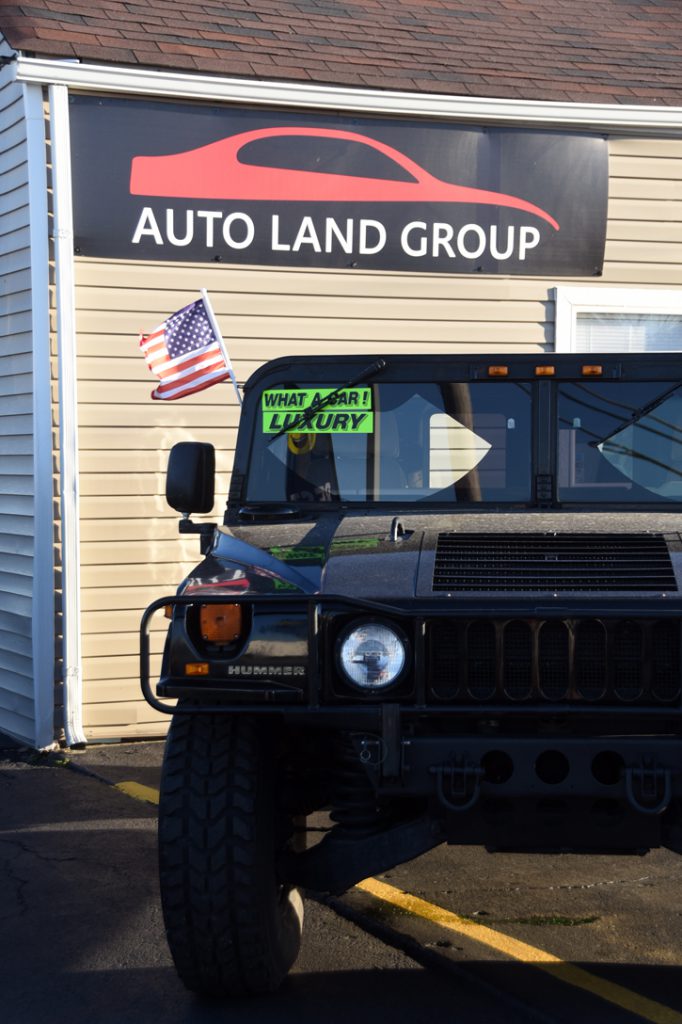 This is NOT a luxury vehicle. 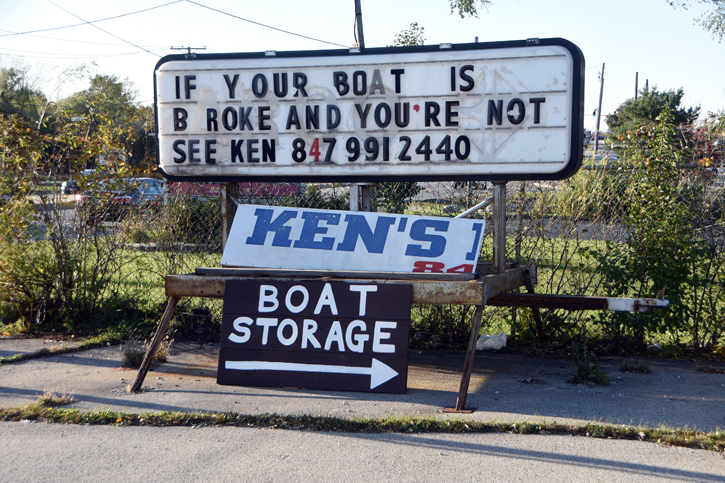 Thanks to a lack of zoning oversight, any number of small, unlicensed businesses can be found between and behind the Rand Road dealerships. 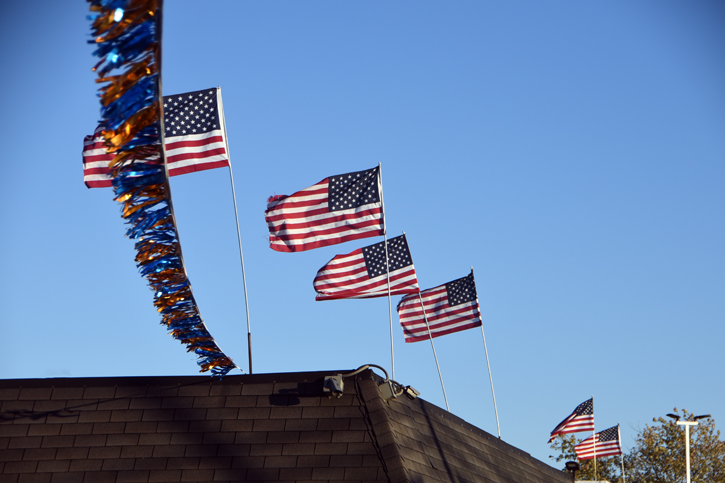 Though they do business primarily in Spanish, the dealerships along Rand Road have invested heavily in American flags.