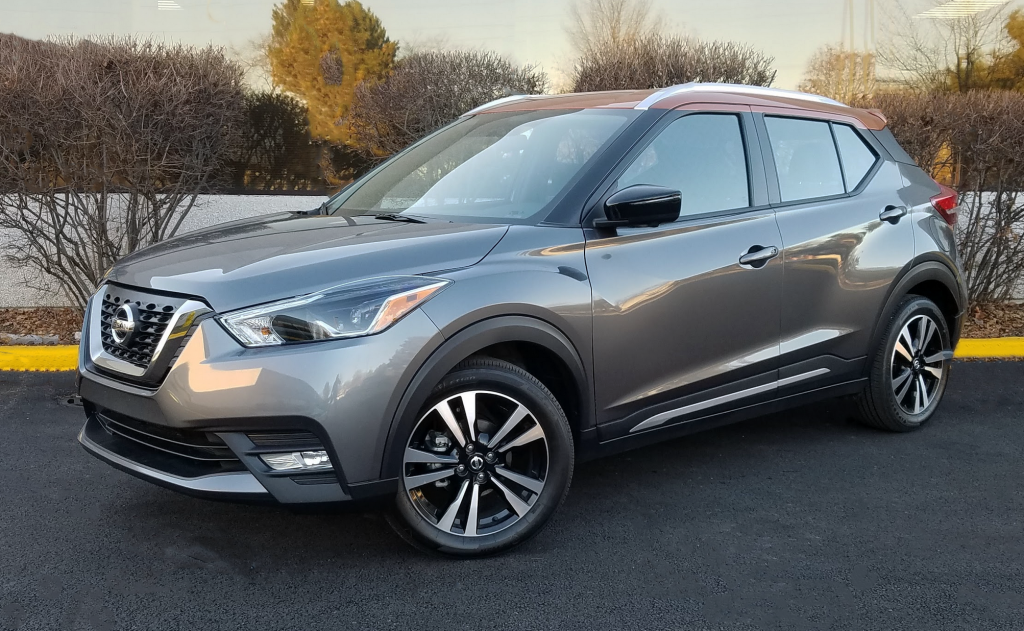 The good: Decent ride quality, fun styling inside and out

The not so good: All-wheel drive is not offered

Sometimes, observing what’s going on in the auto industry is as exciting as watching cells divide.

Consider the small sport-utility vehicle. While the compact-crossover SUV was still becoming a thing—and a popular thing at that—some automakers began going smaller yet, creating a mutation known as the subcompact SUV. In no time the subcompact grew into a virtual organism of its own, one that spread so fast that a couple of years ago your humble servants at Consumer Guide had to create a new ratings class for these itty-bitty utes. 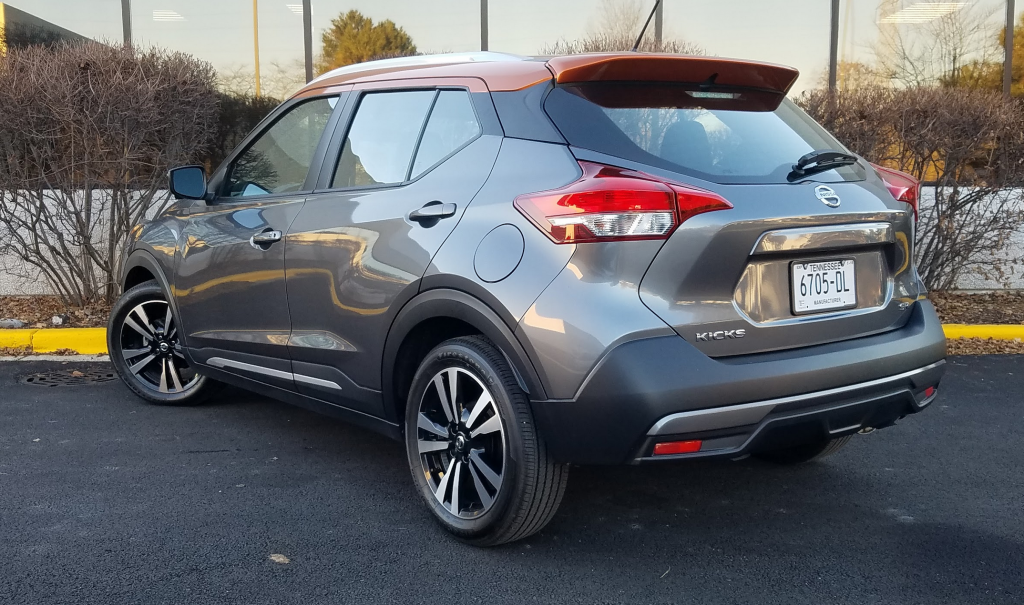 The Kicks launched as a late 2018 model, slotting in below the Rogue Sport in Nissan’s crossover lineup. Though it’s entry level in both size and price, the Kicks offers some spunky styling touches and desirable standard safety features.

Now, with subcompacts still under the microscope, we might be witnessing yet another subdivision to a kind-of-a-sport-ute subcompact SUV. These are solely front-wheel-drive vehicles with expressive styling, a wagon-like hatchback body, and a little extra ground clearance. First came the Toyota C-HR, launched in mid 2017 as a model-year 2018 product. Then about a year later came the Nissan Kicks. If history repeats itself. . . . 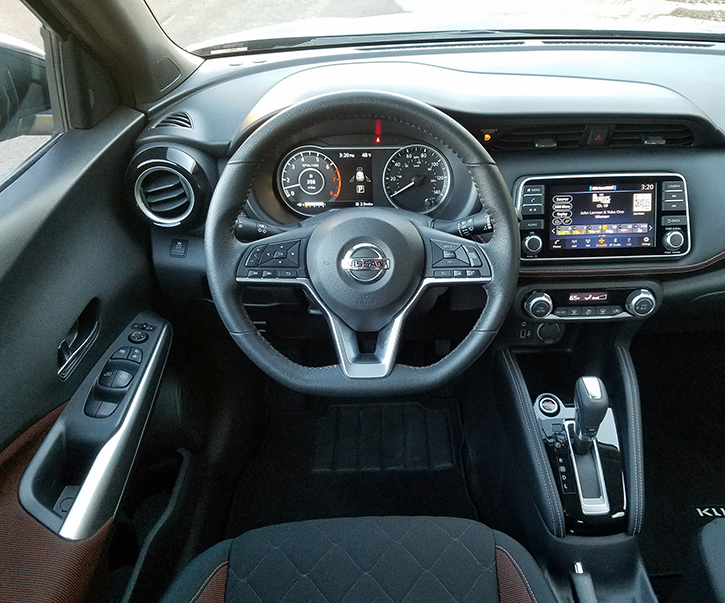 The Kicks’s cabin exhibits some evidence of cost-cutting–even in top-line SR trim–but the sporty design and fun trim details make for an attractive ambiance nonetheless. The audio and climate controls are laudably simple to use.

Where the C-HR marked Toyota’s entry to the subcompact SUV field, the Kicks is the de facto replacement for the Nissan Juke, the mini-ute that got the whole class started as recently as 2011. The Kicks isn’t as powerful as the Juke was, and it doesn’t have its AWD option, but the new vehicle is longer from bumper to bumper with a longer wheelbase, yet is lighter. With due consideration of its overall size, the Kicks has useful cargo and passenger room with the promise of cash-saving fuel mileage.

The Kicks offers a decent amount of cargo space inside considering its petite exterior dimensions. Choosing the optional Rockford Fosgate audio system adds a cargo-floor-mounted subwoofer (hidden under the cargo mat in the photo at left) that makes for an uneven load floor.

The Kicks comes in three trim levels, ascending from S to SV and SR. CG tested a top-line SR, but its powerteam of 125-horsepower 1.6-liter 4-cylinder engine and continuously variable transmission (CVT) serves all models. There’s decent power most of the time, with alert standing-start pickup and sufficiently prompt kickdown for safe highway passing. A pinch of extra snap can be found in “Sport” mode. However, from rest it’s easier than you might think to overpower the front wheels (and not even in Sport), the 205/55R17 tires spinning for grip and traction control chiming in, especially when turning from a side road. This driver also felt occasional slurred “stumbles” from the transmission, which has been given the sensation of gear shifts despite being a CVT. 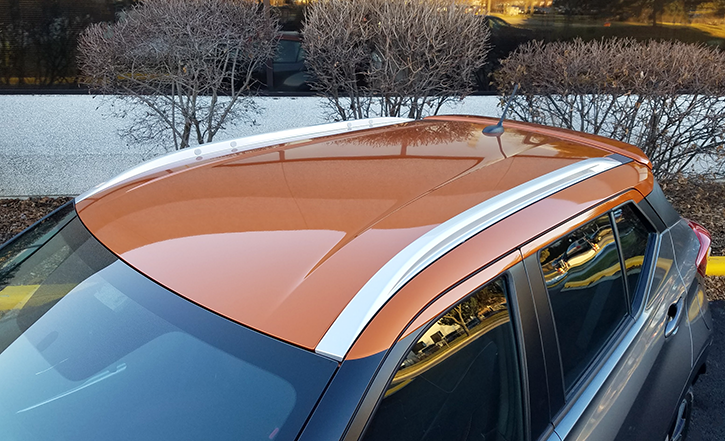 Nissan offers a handful of extra-cost contrasting-roof paint options for the Kicks that add a bit more pizazz.

EPA fuel-economy estimates work out to 31 mpg in the city, 36 in highway use, and 33 combined. This reviewer recorded 30.8 mpg from a 176-mile test stint with 50 percent city-style driving, but a couple extended runs at speed.

In general, the Kicks handles and steers pretty well. It exhibits fairly good management of body motions in corners. Ride on the front-strut/rear-torsion-beam suspension is on the firm side, and lots of road bumps are plainly felt in the cabin. Road noise is commendably squelched. 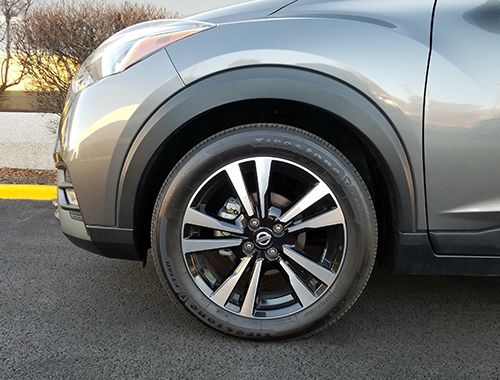 The interior has enough legroom for four average-sized adults. Three trim folks might manage to get across the rear seat, thanks in part to a low floor tunnel. Headroom is good throughout. Rear cargo area—25 cubic feet of it—is not bad for a tiny vehicle, and it’s well shaped. However, the test car was outfitted with an optional Rockford Fosgate audio system, and one of the components for this upgrade occupied considerable space right behind the rear seats, which could complicate loading. While the 60/40-split rear seats fold almost flat, they do so at several inches above the level of the load floor.

The 2018 Kicks SR starts at $21,285 with delivery. (CG’s tester came to $22,245 with a trio of options.) Exterior standard features specific to the SR are a dark-chrome grille accent, roof-mounted rear spoiler, black caps and integral turn signals for the heated mirrors, fog lights, and LED headlights with LED signature accents. Inside, the SR owner gets a 360-degree Intelligent Around-View Monitor with moving-object detection; leather-wrapped steering wheel and shifter knob; and a colorful cloth interior with orange contrast stitching, seat-bolster panels, and door panels/armrests. (This dash of interior color complemented the metallic-orange paint added to the test vehicle’s roof.)

Soft, padded surfaces reside on the face of the dash and on the sides of the console where knees are likely to contact—a nice touch because lateral legroom is close, and knees are very likely to rest against the console. Personal-item storage is just so-so, with a smallish glove box, two open cup holders and a small exposed bin in the console box, and an open underdash area with digital-device/power inputs. Pockets with bottle holders are included in the front doors. For rear passengers, there are pouches on the backs of the front seats, small angled bottle holders in the doors, and a cutout in the back of the console that can serve as a cup holder.

Just how much of a true SUV the Kicks is can be argued. To some it may sound like a front-wheel-drive car within a sport-utility shell. But for price and features, even at the top level, there’s less room for debate about its value.

All-wheel drive isn’t on the menu, but the Nissan Kicks’s elevated ride height and tall-ish body build make it a logical rival to the Toyota C-HR and the rest of the crop of subcompact crossover SUVs.