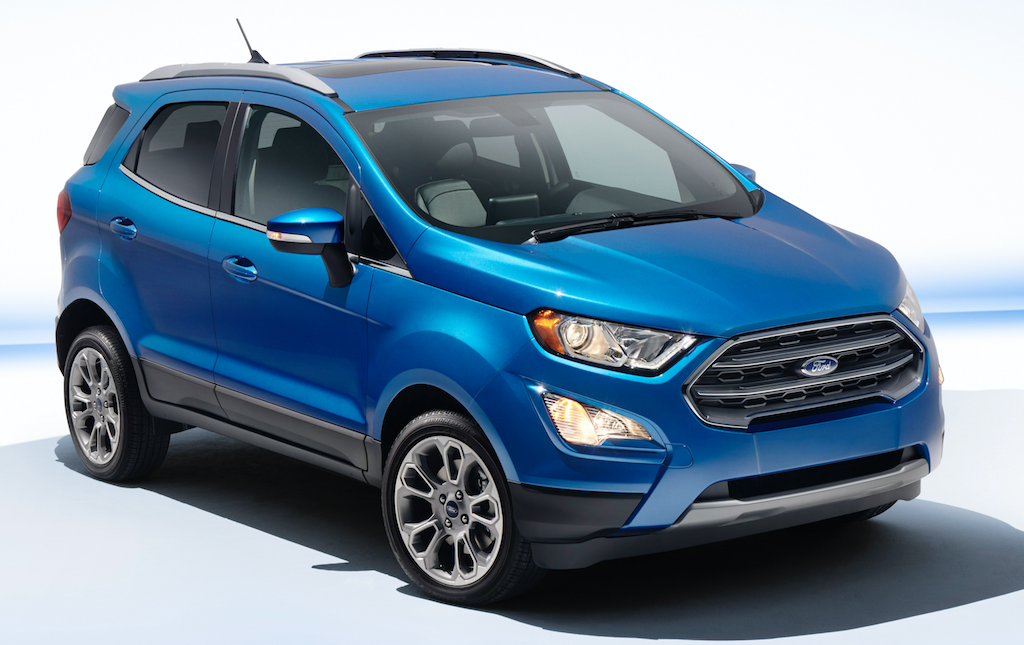 In what may well be one of the best automotive upgrades of 2018, the all-wheel-drive version of the Ford EcoSport Titanium comes with a 2.0-liter engine in place of the 1.0-liter turbocharged engine in the front-wheel drive EcoSport Titanium — all for just $1450 extra. And besides the advantages of AWD, at least as important was the extra power of the larger engine. 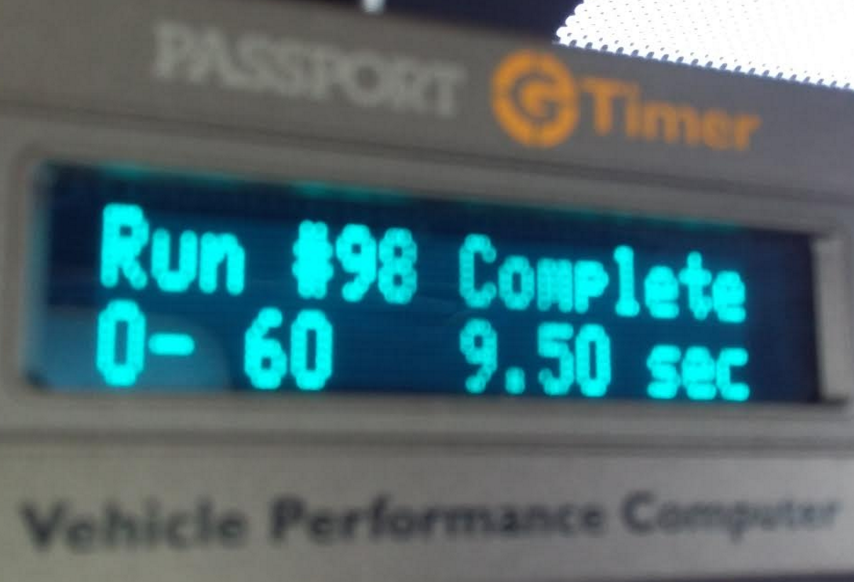 While hardly quick, at least an EcoSport with the 2.0-liter engine doesn’t feel lethargic, which a previous version with the 1.0-liter turbo often did.

That latter point really showed itself both on the road and in our timed 0-60 runs. Whereas the little turbo often felt overtaxed — even in around-town driving but particularly at higher speeds — and averaged 0-60 mph in a timid 10.2 seconds, this version with the 2.0-liter felt stronger under all circumstances and managed to sprint to 60 in 9.5 seconds. OK, a 7/10ths of a second improvement may not sound like much and “sprint” might be overstating it — that’s still on the slow side of average for the subcompact-crossover class — but it felt quicker enough that acceleration was no longer a significant demerit. And the 6-speed automatic — which some folks prefer to the CVT automatics offered by many rivals — kicked down fairly quickly when the throttle was stabbed at speed. Furthermore, we recorded 24.9 mpg in 70 percent highway driving, exactly what we got with the 1.0-liter in 55 percent highway driving. However, note that neither figure is particularly good for the class — we’ve averaged about 27 mpg with a Chevrolet Trax, Honda HR-V, Hyundai Kona, and Mazda CX-3.

We invite you to read our previous review of the 1.0-liter, front-drive Titanium for more details on how that version of the top-line trim level fared, but some things noticed in this test are worth another mention. 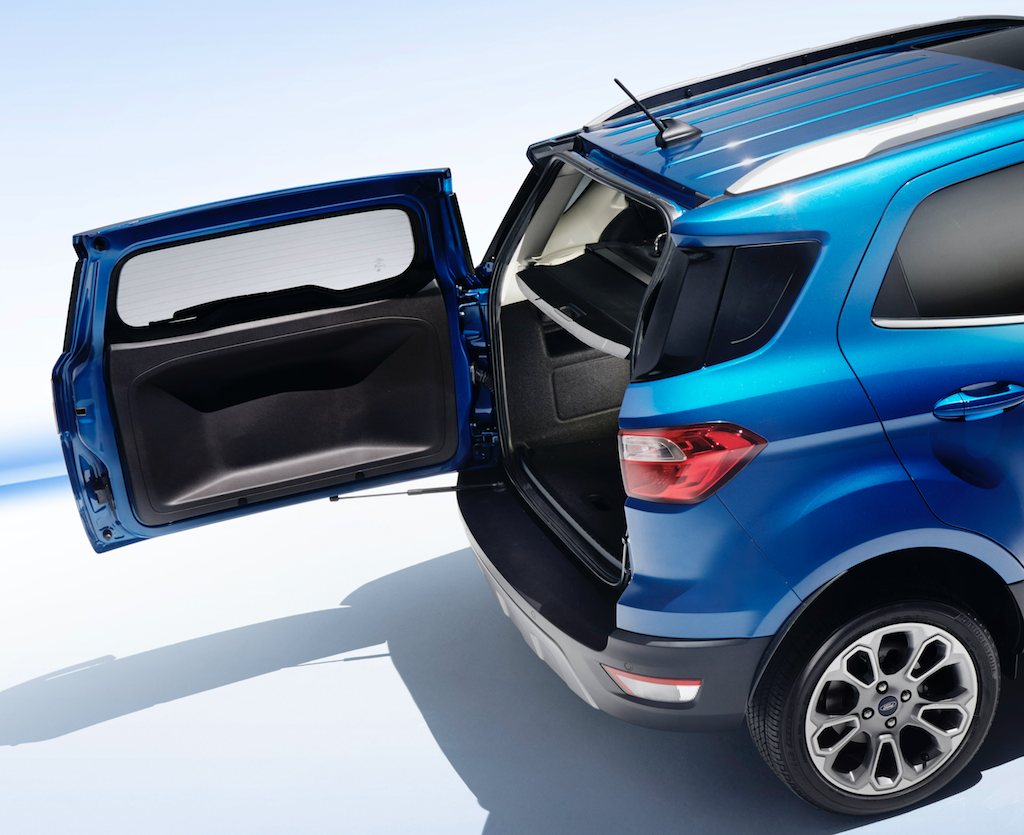 EcoSport’s rear cargo “hatch” is actually a side-hinged door that opens toward the driver’s side of the vehicle, with the release hidden near the right-side taillight. For such a small crossover, the EcoSport with the 2.0-liter engine has an unusually high towing capacity of 2000 lbs.

A great gag with the EcoSport is asking a friend to get something out of the cargo area — and then stand and watch while they fumble around trying to find the release button under the center of the liftgate … because it’s not there. Instead, it’s located near the right-side taillight lens, as the “liftgate” is actually a door that opens to the left. Great fun.

Get the door open and you’ll find a clever touch a few other vehicles have, but not nearly enough of them. The floor is a panel that can be removed and set in three different positions: low for maximum cargo height, medium to level the floor with the door opening, and raised to lift the forward edge so that it rests level with the folded rear seat backs, which otherwise leave a 4-inch “step.”

The cargo floor can be set at three different heights or angles. At left is the lowest setting, for maximum cargo height. The middle setting raises the near end to be flush with the door opening. The high setting (right) raises the far end so that it’s flush with the folded rear seat backs, which makes it much easier to slide long items forward. 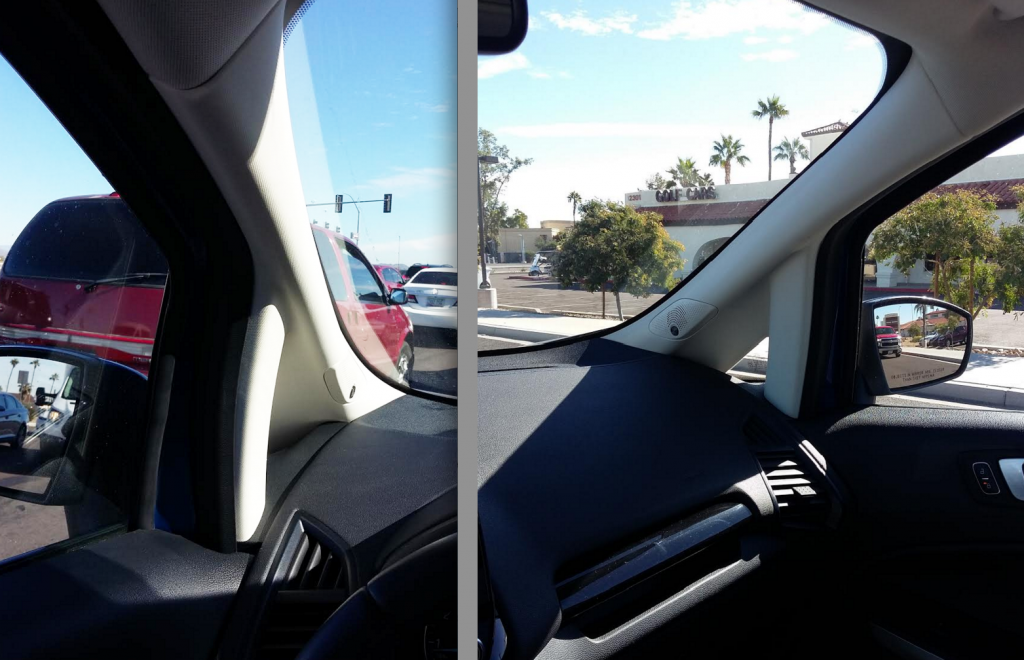 Thick, inverted Y-shaped front roof pillars block a lot of the front-corner view, but the passenger-side one has a small hole that allows curbs to be seen in corners.

Although visibility is restricted to the front corners due to wide, inverted Y-shaped roof pillars, the right-side one has a little quarter window that allows a view of, for instance, the curb when turning a corner. Visibility is just fair to the sides and rear, though a standard rearview camera helps when backing. Unfortunately, the sun visor doesn’t extend when swung to the side, leaving five inches of the window uncovered.

Audio and climate controls are relatively easy to decipher, but while the former are high and within easy reach, the latter are mounted a bit low. However, they earn points with rotary dials for temperature and fan speed, with mode set by three buttons (defrost, dash vent, and floor vent), all of which  can be chosen at the same time — a nice touch. Right below them are handy buttons for the heated front seats and steering wheel, and below that, a button to turn off the engine auto stop/start system — useful in stop and go traffic. Next to it are two lighted USB ports, conveniently located above a slot perfectly sized to hold a cell phone, which is right next to a 12-volt plug. So overall, the control layout earns some kudos.

Left to right: Two niceties noticed are the individual tire-pressure readouts (top) and the large compass (bottom) that can be selected to fill the center screen of the instrument panel. The dash is nicely laid out, but there are only small storage areas, and the door tops aren’t padded — though the dash and armrests are. All three climate modes can be chosen at once (a nice touch). The heated-seat and steering-wheel buttons are easy to reach, as is the button to deactivate the auto stop/start system, which is right next to two lighted USB ports, all sitting over a handy cell-phone holder.

Interior storage space, however, does not. Aside from the convenient cell-phone pouch mentioned, all other storage spaces are small. Interior materials are just so-so, as the dash top and armrests are padded, but not the door tops.

For such a small vehicle, the EcoSport offers decent interior space. Front-seaters should find plenty of headroom and legroom. Oddly, the driver seat on our test vehicle had power height adjustment and seat-back angle, but manual fore/aft adjustment. It also had manual lumbar adjustment, a comfort plus. Rear-seat passengers sit on a high cushion that limits headroom for anyone over about 5’11”, though legroom is OK unless the seat ahead is moved far back, and egress is just a bit restricted due to a smallish door opening. A nice feature is the 110-volt AC (household current) outlet on the back of the console.

Although our top-line Titanium included a host of features, one expected safety feature was absent. We’re real fans of forward collision warning and mitigation (and so are most safety groups), but the EcoSport doesn’t offer it. It does, however, offer blind-spot and rear-cross-traffic alert, both of which are standard on the Titanium. Other notable standard features include a moonroof, automatic temperature control, leather-trimmed seats, heated front seats, premium audio system with satellite radio, 8-inch touchscreen, keyless access and starting, and a voice-activated navigation system.

EcoSport is now the shortest crossover you can buy, a selling point to those who may have to park it on a city street. But aside from the lack of forward collision warning, it merits consideration by anyone looking for an inexpensive small crossover — at least when equipped with the bargain-priced 2.0-liter engine. 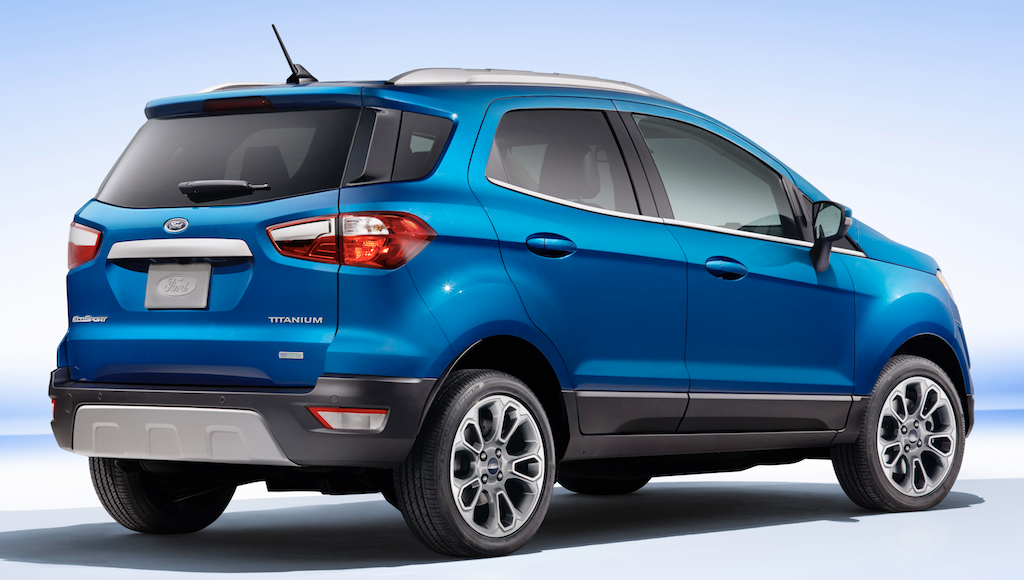 As the stubbiest of crossovers, the EcoSport is a natural for inner-city work. But in 2.0-liter form, at least, it’s an alternative choice for anyone looking at small utility vehicles. Our loaded tester listed for a tad more than $29,000 — not a particularly compelling value, but some significant incentives totaling up to $2750 may be available.