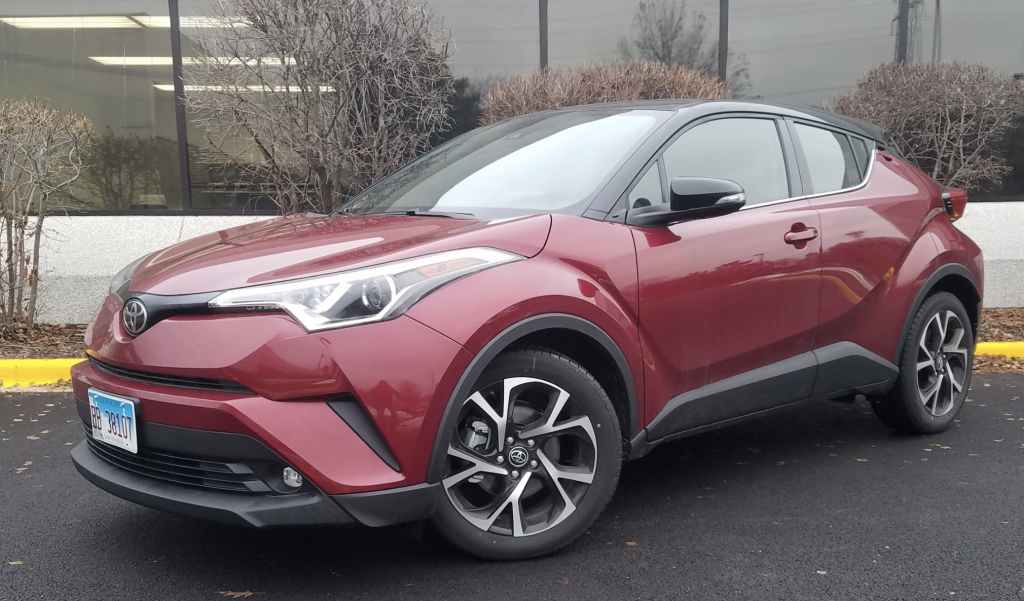 The not so good: Visibility, cargo versatility, lack of available all-wheel drive

As crossovers become ever more popular, manufacturers are finding ever more ways to offer more of them. One way to do that is to squeeze a new model between those already offered, typically in size. Another is to do what crossovers did in the first place: combine attributes of two segments.

Toyota chose the latter for the C-HR.

This is a little easier to understand if you also understand that “C-HR” stands for “Coupe-High Rider.” And that pretty much describes it. 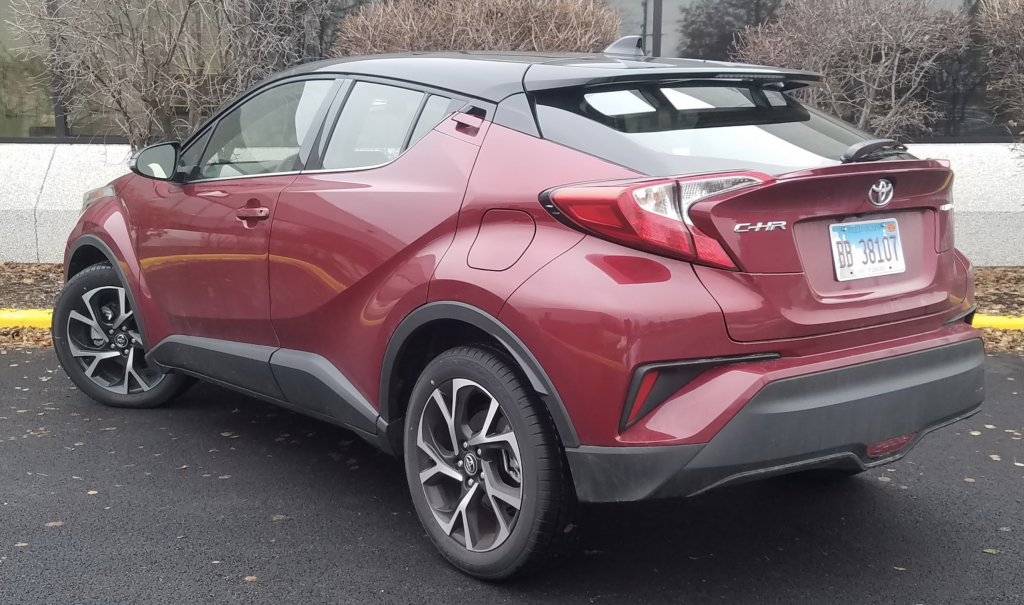 The C-HR combines attributes of a sporty coupe with the greater ground clearance and taller overall height typical of crossovers. The “coupe” aspect is reflected in the fact that — while it has four doors — the handles for the rears are hidden in the top rear corners at the roofline, and the roofline itself slopes down at the rear for a “fastback” look.

Although the C-HR has four doors, the handles for the rears are hidden up high, near the roof pillars. That arrangement, along with a sloped rear window, gives the vehicle a coupe-like profile. And the C-HR is taller and has more ground clearance than your typical car, both attributes being appealing to many folks. What it lacks, however — and what places it in that “in-between” arena — is that it’s not offered with all-wheel drive, which is chosen by more than half of all buyers, even in the low-cost crossover classes.

Last year we tested an XLE version of the C-HR, but this year’s offering came to us as a line-topping Limited, which replaces the previous XLE Premium. Also new for 2019 is a bottom-line LE, which comes in below the XLE at a cost savings of about $2000, and that Apple CarPlay is finally available (though not Android Auto — yet). 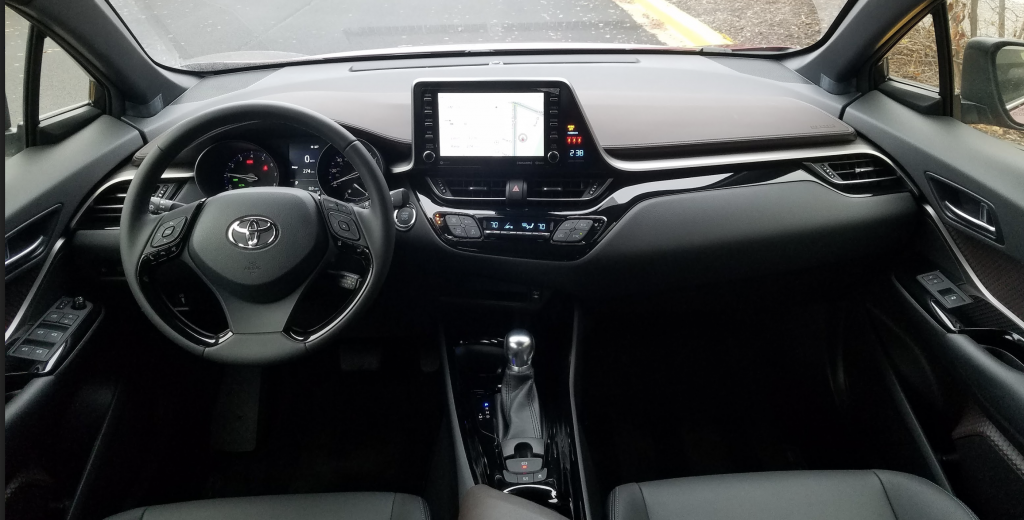 Nearly as expressively styled as the outside, the interior features relatively nice materials (at least in topline Touring trim) and is finally host to Apple CarPlay (though not yet Android Auto).

Hip-height seats and taller door openings – both being crossover trademarks – make it quite easy to get into the C-HR, and you sit higher than in a normal car for a better view over traffic. In most other directions, however, the view is a bit restricted. While good to the left front, it’s only fair to the right front and sides, and downright horrible to the rear corners, though the standard rearview camera helps when backing. And when swung to the side, the visors don’t extend, leaving eight inches of the window uncovered. 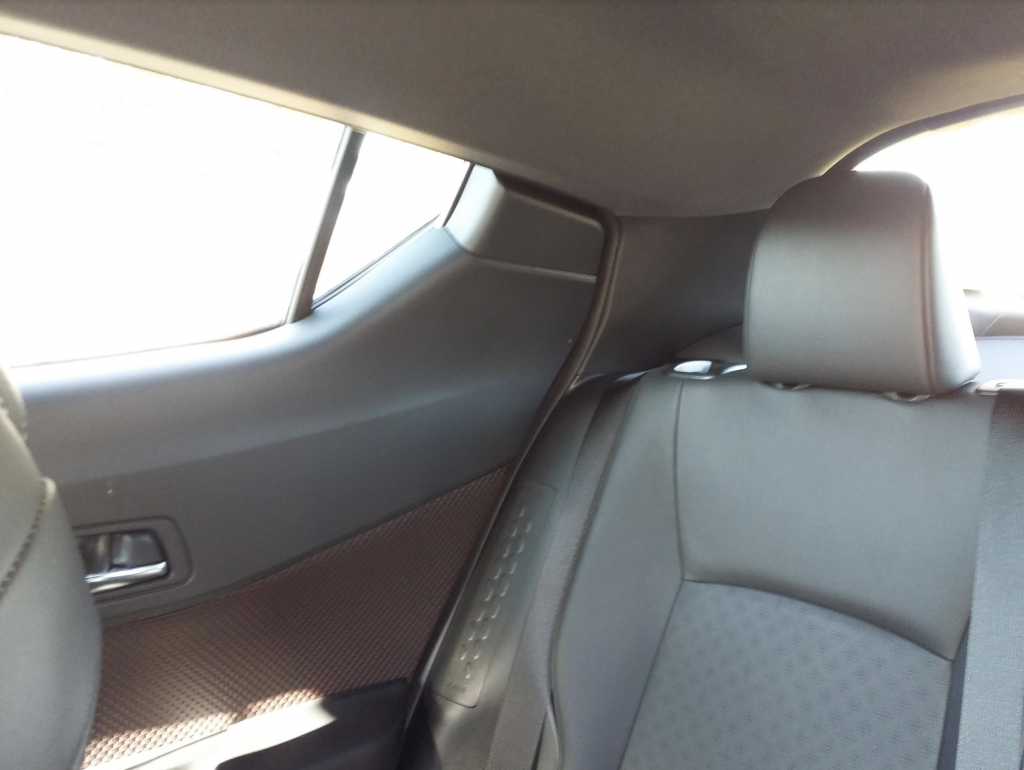 Those sporty lines and sloping rear roof come at a cost — and that cost is rear-corner visibility. Thankfully, a rearview camera is standard.

The rest of the “inside” news is also mixed. Although four average-size folks should find plenty of space, legroom in back grows tight behind a tall front-seater, and though a nearly flat floor would allow three kids to sit there, nobody gets a good view out. And for what passes as a crossover, there’s not a lot of interior storage space, with difficult-to-reach Aux and USB jacks next to an equally hard-to-access forward console bin tucked under the dash being a bit out of character for a Toyota. By contrast, the audio system is easy to reach and use, the climate controls – consisting of repetitive-step “flippers” for temperature, fan speed, and mode – more the former than the latter. There’s deep padding on the armrests, not so much on the door tops, with other materials just looking “okay.” 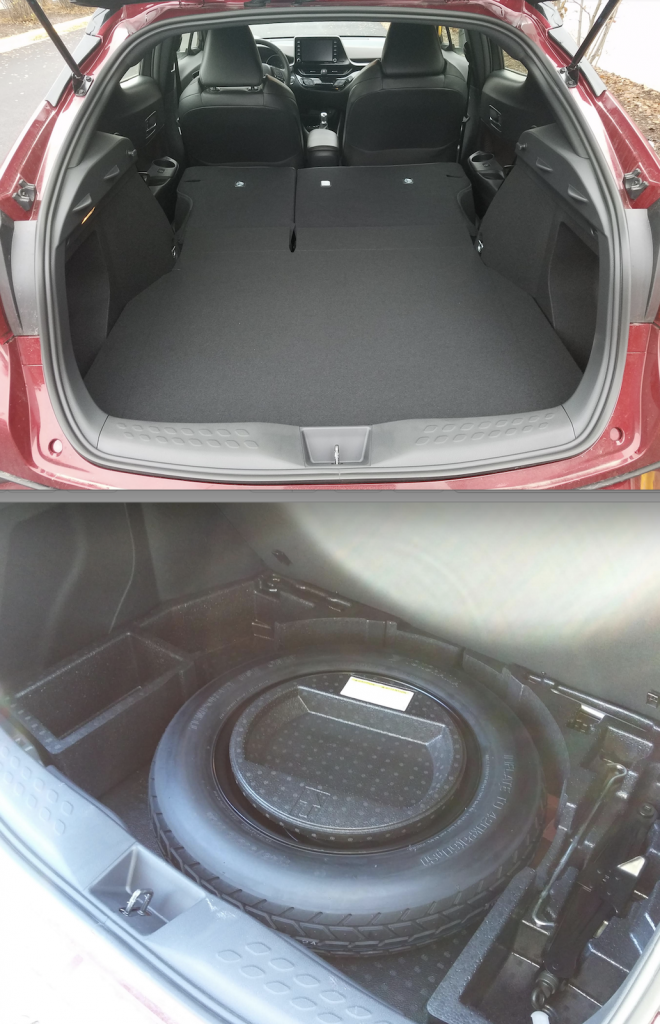 Although the sloping roof cuts into usability, there’s still plenty of cargo space in back, with a little more offered under the floor.

In terms of cargo space and versatility, the C-HR falls between cars and crossovers. Being a hatchback with a tall build, the cargo opening is large, but the sloped rear window limits what can be carried underneath it. However, the rear seat backs fold flat and level with the load floor, meaning long items can be easily slid forward – a rare commodity in a sedan.

One thing sacrificed in most crossovers compared to cars is performance. Their tall build adds weight and hinders aerodynamics, both being a drain on fuel economy, acceleration, and handling. But the C-HR fares quite well here. 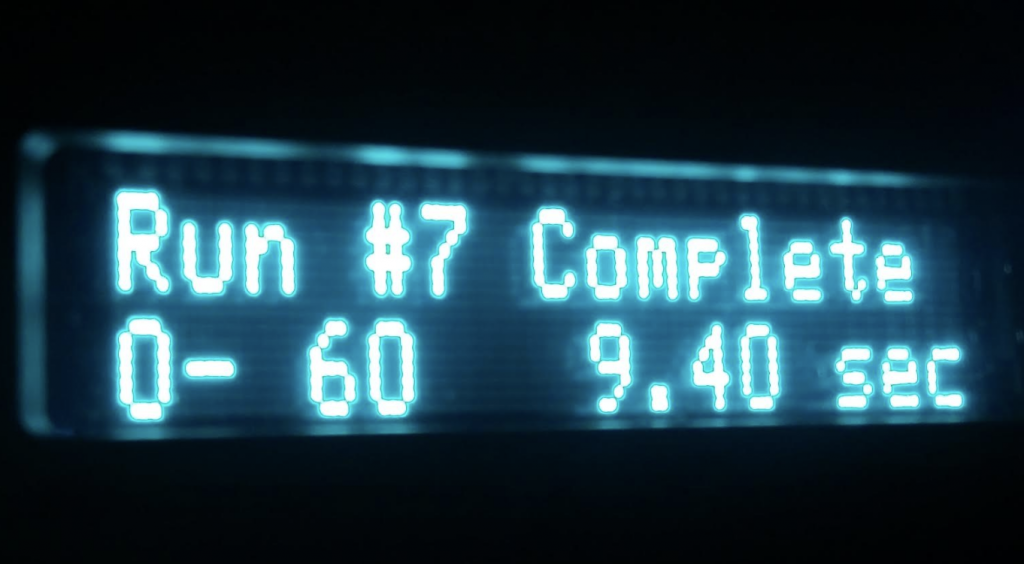 Though hardly quick, the C-HR nonetheless felt more spritely than its 9.4-second average in our 0-60-mph testing would imply.

The only powertrain offered is a 144-horsepower 2.0-liter four mated to a CVT automatic transmission. Overall we managed 28.6 mpg in 45 percent city driving, with one longer highway stint netting us 31.8 mpg – certainly good for a crossover. Less impressive was our 0-60-mph acceleration average of 9.4 seconds. But the C-HR felt stronger than that figure implies, as it provided a decent full-throttle jump off the line and quick kickdown response when the throttle was floored from speed. Ride and handling didn’t seem to suffer much, either, as the C-HR strikes a good balance between the two, being disturbed little over our pockmarked Chicago streets while leaning little in corners. We also liked the standard Brake Hold feature, which allows you to take your foot off the brake during long stops with the press of a console button.

When vehicles blend the characteristics of traditional market segments, the lines get a little fuzzy. As a result, logical competitors to the C-HR fall into two classes: On one side is the Kia Soul, which we consider a subcompact car, on the other side, front-drive subcompact crossovers such as the new Nissan Kicks, as well as front-drive versions of other segment rivals, most notably (in terms of “sportiness”) the Mazda CX-3.

Aside from its significant suite of standard high-tech safety features, what the C-HR most has going for it is that it has more “personality” — at least in terms of style — than others in the segment. So if you don’t need the traction advantages of all-wheel drive and don’t mind sacrificing a bit of utility, the C-HR is a good way to stand out from the small-crossover crowd.

It makes some sacrifices for it, but the C-HR’s swoopy styling certainly sets it apart from its crossover competitors.