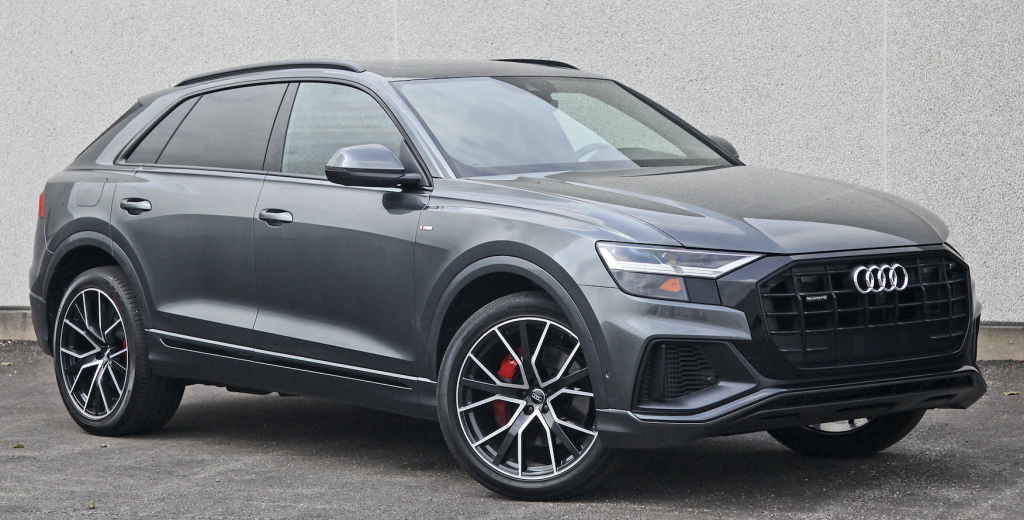 The good: Passenger room and comfort

The not so good: Control layout, tire noise, so-so level of standard equipment for a luxury-brand vehicle of this price

Running counter to Audi’s conventional model-numbering strategy, the new 2-row Q8 crossover is smaller than its 3-row Q7 stablemate. But it’s also significantly more expensive, so perhaps the strategy has more to do with price than with size.

Thus it would seem as though the Q8 is positioned as sort of a style leader – much the same as BMW’s fastback X6 is the racier version of the company’s boxier and more practical X5. But in the case of the Audis, that “style” sacrifices both passenger count and cargo capacity. 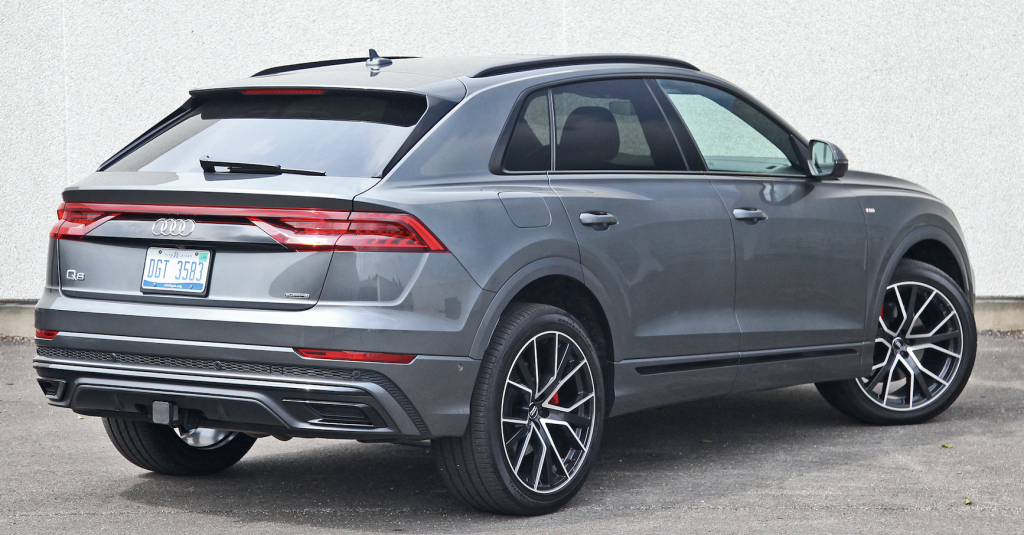 Although built on the Q7 platform, the Q8 is 3.3-inches shorter and has a sloped rear window, both of which conspire to reduce cargo space — and delete the Q7’s third-row seat. Yet the Q8 starts at a good $13,000 more.

Although it rides the same platform as the larger Q7, the Q8 is 3.3-inches shorter in overall length and has a sloped rear roofline, a combination that results in about 10 cubic feet less cargo capacity. But both Audis ride the same lengthy wheelbase, so passenger room in the first two rows is much the same — which is to say, spacious, though a huge floor hump encroaches on center-passenger foot room in back.

But what’s under the hood is decidedly different. Whereas the Q7 is offered with either a turbo 2.0-liter four or supercharged 3.0-liter V6, the Q8 gets the same 335-horsepower turbocharged 3.0-liter V6 with 48-volt “mild hybrid” system found in other recent Audis we’ve tested, including the A7 and A8 sedans. But in this application, at least, the promise made by all the high-tech hardware wasn’t kept in practice. 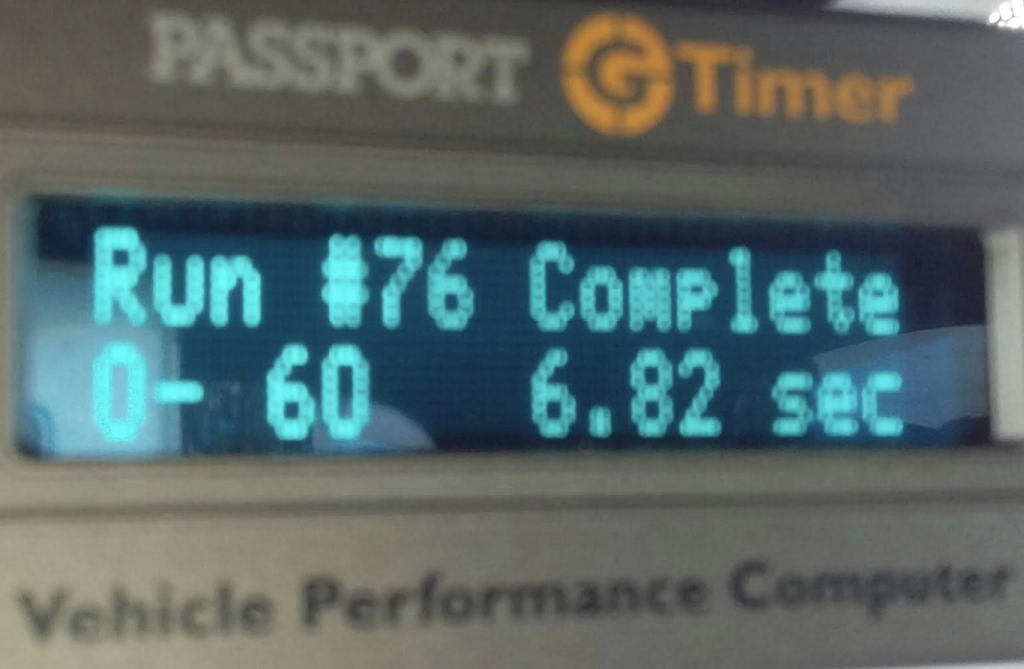 Partly due to what seemed like a bit of lag between flooring the gas and really taking off, the Q8 averaged only a moderately quick 6.82-second 0-60-mph run, according to our timer.

Although not very apparent in light-throttle applications, dipping in farther made it seem as though there was a disconnect between the throttle pedal and the powertrain. Oftentimes, whether from a stop or while underway, you’d put the gas pedal down, and nothing would happen for a couple of beats, and then suddenly the Q8 would take off. This was particularly disconcerting when trying to turn left across an intersection. We averaged 6.82 seconds in the 0-60 dash — also with a delay from the jump — a good but not great performance for this class of vehicle. Plus we only averaged 18.2 mpg in mostly highway driving on premium gas, so the “mild hybrid” seemed to have a very mild effect on fuel economy.

Standard on the Q8 is an adaptive suspension, with air suspension and 4-wheel steering optional. Our tester just had the base suspension, and while it provided a fairly comfortable ride despite the lower-profile tires included with the optional Year One package, those tires thumped loudly over bumps.

As is the Audi norm, the interior is more stately than opulent, and it’s trimmed with quality materials. The Q8’s infotainment and climate-control screens were handy but proved overly complicated to use.

Inside, the Q8 exhibits Audi’s usual “subdued luxury” trimmings and high-quality materials. A large glovebox is joined by a small, shallow console box housing dual USB outlets, two cupholders straddling a 12-volt plug, a left-side dash bin, and small map pockets with cupholders in the doors to make for decent interior storage space. Visibility is good to the front and OK to the rear, but very restricted to the sides. The rearview camera can “see” in a 180-degree arc and you can also get a rotating 360-degree view, but we wish the image could be set to take up the whole 10-inch screen rather than just a portion of it. We also wish the backup alarm made a louder tone, as we could barely hear it, even without the radio being on.

Although sportier outside, the Q8 is just about as accommodating inside as its larger Q7 sibling. Included with the Premium Plus package is 4-zone climate control — which allows separate temperatures for both sides of the rear-seat area — while the Cold Weather package adds heated rear seats. A center-seater back there has to contend with a huge driveline hump, but egress is eased with a nifty foot-clearance cut-out in the side pillar.

Audi’s MMI infotainment-control system used to include console knobs we didn’t like, but this latest generation nixes the knobs and uses dual touchscreens instead. We don’t like this setup particularly well, either, as the control logic is head-shakingly complicated — as is that for the climate system — though at least the touchscreens are within easy reach. Our tester was fitted with an optional CD/DVD player, which is getting to be a rarity nowadays.

A 360-degree camera with multiple views — chosen by hitting virtual buttons on the screen — is included with the Premium Plus package.

As might be expected, the Q8 comes fairly well equipped, but some options seem as though they should be standard at this price. For instance, it was surprising that rear cross traffic alert was part of the $4000 Premium Plus package (which also includes a premium sound system, 4-zone climate control, ventilated front seats, 360-degree top view camera system, and several other features), and that lane-departure warning and intervention required the $2750 Driver Intervention package (which also brings adaptive cruise control with traffic-jam assist and traffic-sign recognition). Other options fitted to our tester included the $600 Cold Weather package with heated steering wheel and heated rear seats. 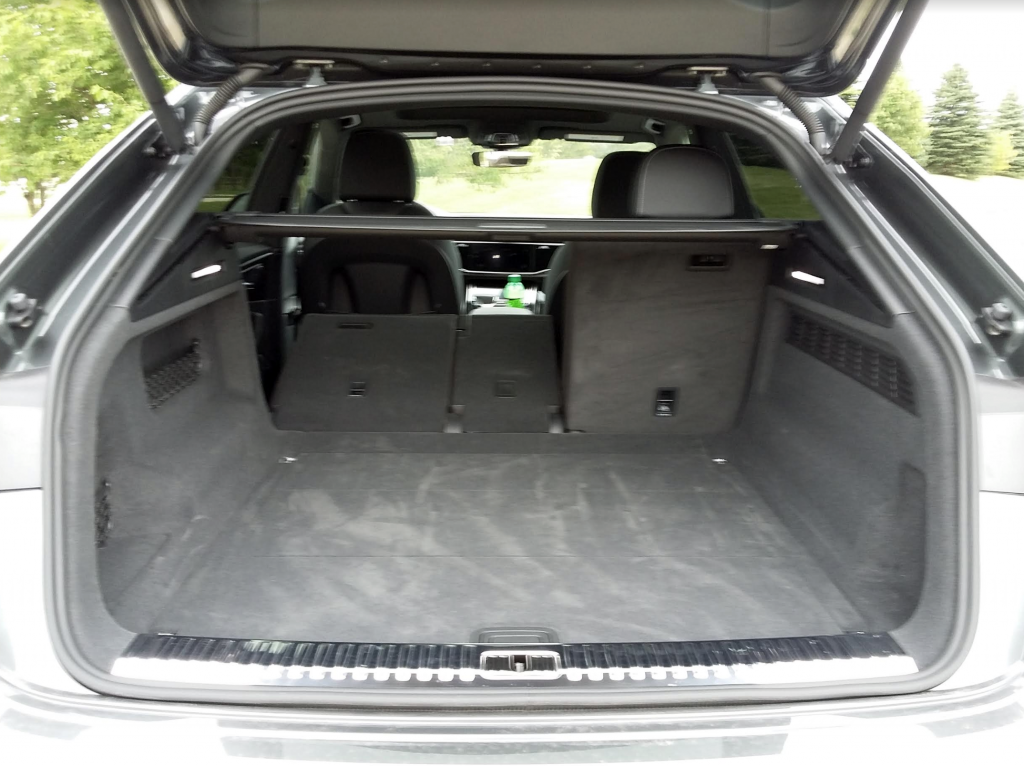 The cargo area is reasonably spacious, but there’s no underfloor storage, and when folded, the rear seat backs create a bit of a hump that long items need to “jump.”

As mentioned, the cargo area doesn’t seem to be an Audi priority with the Q8. While there’s decent room in the whole scheme of things, the sloped rear window reduces the height of what can be stored toward the rear, there’s no underfloor storage, and there’s a slight ramp up to the folded rear seat backs — though that should only cause a problem when trying to slide heavier items forward.

With the crossover market so hot, many manufacturers are trying to slot new vehicles in between existing ones. That’s usually done with size, but in the case of the Q8, it was done largely with styling. And in the end, you pay a lot — in both price and practicality — for the sizzle.

It certainly has a sporting profile for such a large SUV, but that sacrifices some large-SUV practicality. The Q8 also seems to be priced above its level — at least compared to other Audis — and the tested example exhibited some rough powertrain edges and didn’t get the best fuel economy, despite its “mild hybrid” drive system.