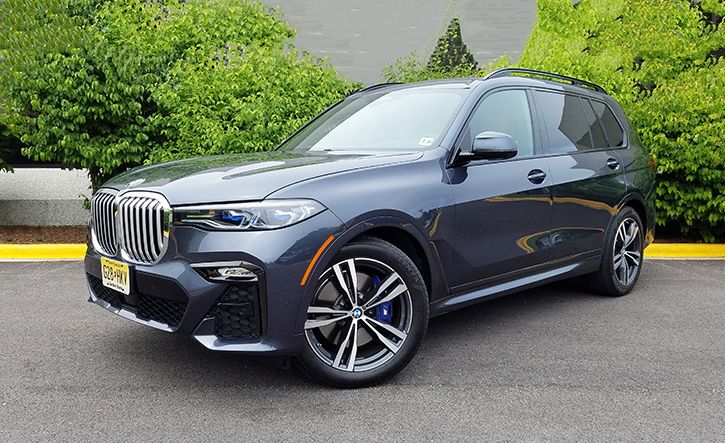 The good: Passenger and cargo room; ride and handling

The not so good: Steep prices; some complicated controls

With it, the German automaker joins the 3-row-SUV club, premium branch. At 203.3 inches end to end, it is nine inches longer than the brand’s midsize 2-row X5, and can seat as many as seven passengers or hold up to 90.4 cubic feet of cargo. All X7s come with standard xDrive all-wheel drive and an 8-speed automatic transmission, so the chief (but not the only) differentiator between the two available models is the engine. 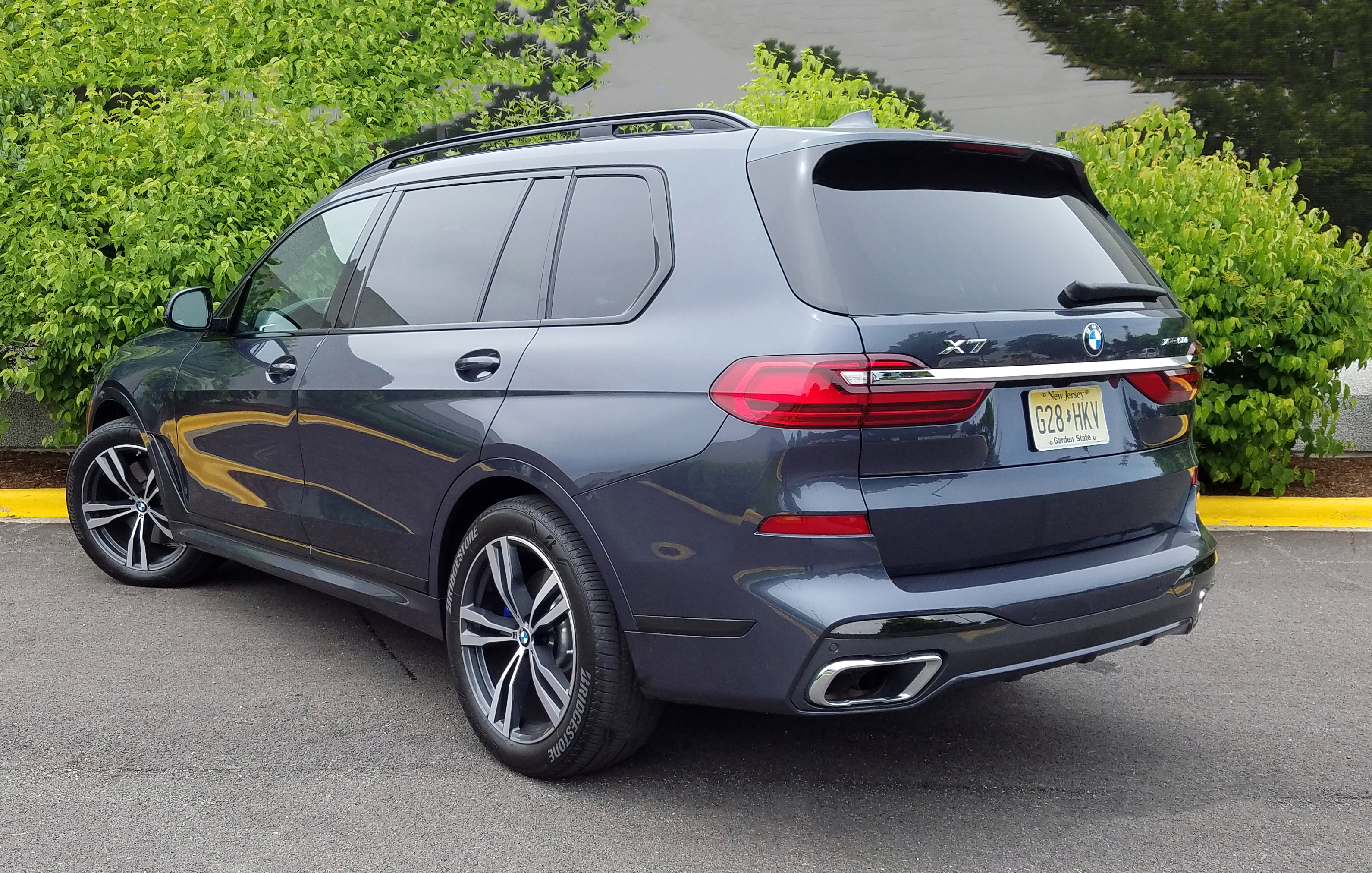 The xDrive40i, with a starting price of $74,895 including delivery, is powered by a 335-horsepower turbocharged 3.0-liter inline 6-cylinder powerplant. The xDrive50i, which leaves dealerships for no less than $93,595, is motivated by a 456-horse twin-turbo 4.4-liter V8. Consumer Guide editors sampled one of the latter for this report. 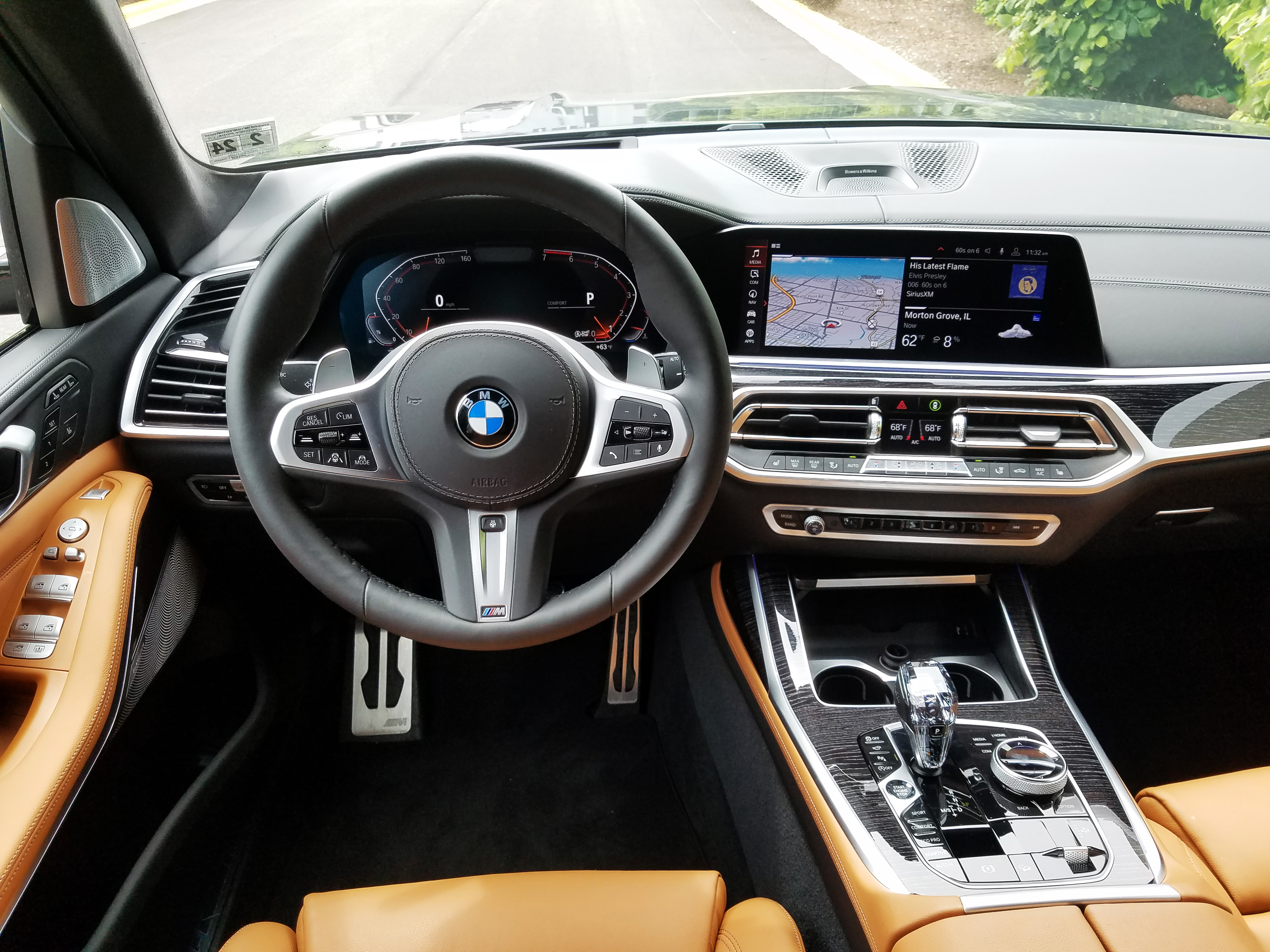 Our X7’s interior brimmed with premium trimmings and high-tech features. A leather-wrapped dashboard added $1200 to the bottom line

While a good many marques have been frantically filling up the subcompact and compact crossover fields in the last decade or so, some have been adding large 3-row jobs to make sure they’re getting as many licks as they can off the SUV ice cream cone. The X7 works moderately well as a people hauler. Its third-row seats power up from the floor and offer cushion height acceptable for adult seating—though legroom for grown-ups is tight and headroom isn’t as generous as in the front two rows. Middle-row seats—they were optional captains chairs in the test truck, which limited capacity to six passengers—power forward to improve access to rear. There is good headroom and legroom in the front two rows.

Seats are comfortable and supportive—even the third-row seats aren’t half bad in this respect. Interior materials are decidedly high-class, especially in the 50i, where Vernasca seat leather is standard. High-gloss wood trim adorns the instrument panel, console, and doors, and leather dashboard trim is available. There’s good personal storage space throughout, with roomy glove and console boxes, door pockets with bottle holders, a hard-sided pouch affixed to the back of each front seat, and sidewall pockets and cup holders in the third row.

The centerpiece of the control array is “Live Cockpit Professional” with its two 12.3-inch displays. One is a digital instrument cluster with main driving gauges at the far ends and plenty of room for vehicle information in between. Audio (including HD and satellite radio), standard navigation, and other features appear in a central screen. They can be operated by voice, touchscreen, or remote console-sited controller. This is iDrive 7.0, BMW’s version of the one-dial-does-it-all concept that high-end European brands swear by these days. In a moment of what had to be divine inspiration for this tester, he intuitively figured out how to save and access radio presets—that almost never happens for him in these big-bucks vehicles. On the other hand, there was a trip-odometer reset in there somewhere that he just couldn’t find. Separate climate controls reside in a long, button-intensive row, with fan speed and temperature at the center on silver buttons with lettering that is hard to read at a glance.

Second-row space is generous for most adults. The second-row seats slide and tilt forward for easier access to the third row–passenger space isn’t near as generous there, but the third-row seats can still accommodate average-sized adults.

The X7 offers 12.8 cubic feet of cargo room behind the third-row seats–enough for a good-sized grocery run. Folding the third-row expands that number to 48.6 cubic feet, and folding the second row opens things up to 90.4 cubic feet.

The X7’s power tailgate is in the 2-piece style that BMW favors for its SUVs, with a large upper transom and smaller lower tailgate. Good, easy-loading cargo space becomes available as soon as the third-row seats are retracted. 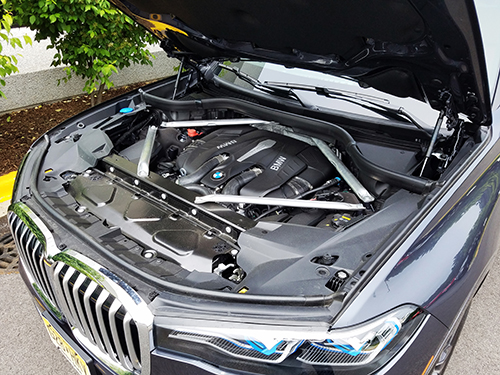 Luxuries and technologies are all well and good, but this wouldn’t be a BMW without attention being paid to performance and driving behavior. The 50i’s V8 makes a considerable 479 lb-ft of torque, and it reaches that peak in as little as 1500 rpm, so it is sharp off the line. There’s plenty of strength for highway passing and merging, and—thanks to different transmission behavior with snappier, more abrupt shifts in “Sport,” one of four selectable drive modes—the truck can feel (and sound) downright racy. Less exciting is the fuel mileage, which the EPA projects at 15 mpg in the city and 21 on the highway. In the wake of a 258.5-mile stint that was 54 percent city-style driving, this reviewer recorded 16.41 mpg, which is about in line with the EPA’s 17-mpg estimate for mixed city/highway operation.

The costliest option added to CG’s test vehicle was the $4750 Dynamic Handling Package. The package includes “Active Comfort Drive,” an electromechanical stabilization system for cornering; “Road Preview,” which uses a camera behind the rearview mirror to read the road surface ahead and make suspension adjustments via the “Dynamic Damper Control” system; and“ Integral Active Steering” that turns the rear wheels opposite to the front wheels at low speeds to tighten turning radius, and turns the rear wheels in the same direction as the fronts at higher speeds to improve vehicle stability. Ride in “Comfort” drive mode seemed a little too soft at times, with some body wallow and pitching when crossing pavement cracks and potholes. However, switching to Sport reduced this tendency. Braking response was excellent.

Extensively optioned as it was, the test X7 50i rose to $112,245. There is no penalty in room in the 40i version, and some of its standard-equipment compromises can be redeemed from the options list if you must have them, so the 6-cylinder model dangles a better value proposition. Either way, it’s clear BMW has entered the large SUV class in a big way.

BMW’s new-for-2019 three-row “plus-size” SUV is its biggest vehicle yet. The X7 is about as athletic as a large premium SUV can get, and the xDrive50i offers invigorating acceleration to boot (with a not-unexpected penalty in fuel economy). Also not unexpected for a top-line BMW: steep prices and pricier-still options.