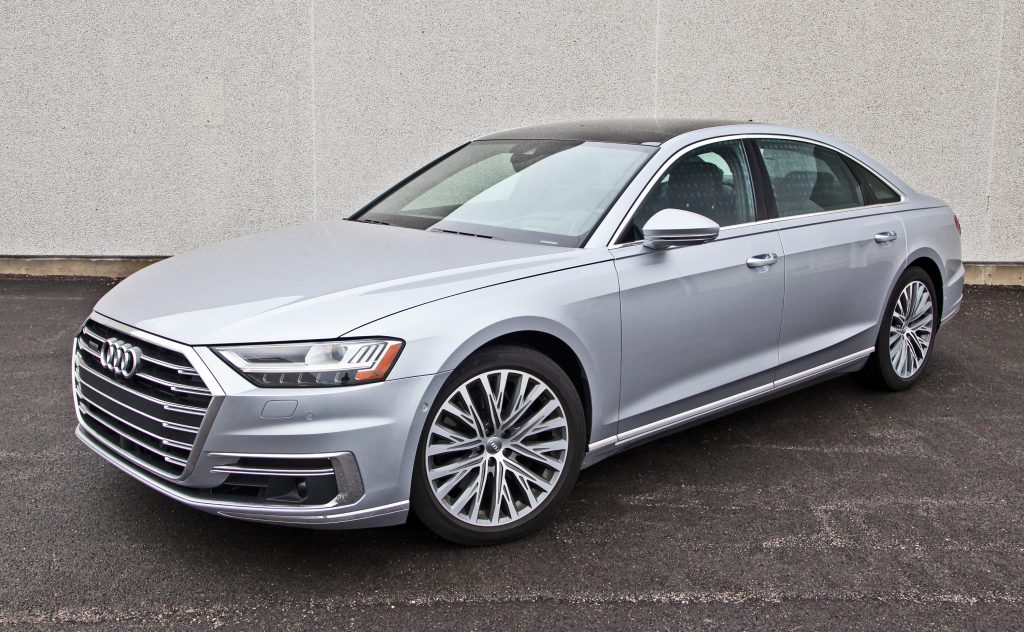 The good: Better than expected fuel economy given the A8’s power and size

The not so good: Pricey option packages account for 20 percent of our test car’s bottom line, limited trim and drivetrain options

If you happen to care about your legs and head, and their comfort, there’s nothing wrong with a large car—especially if it feels like more of the space is being devoted to the inside than the outside. That’s the sense you get from the 2019 Audi A8. 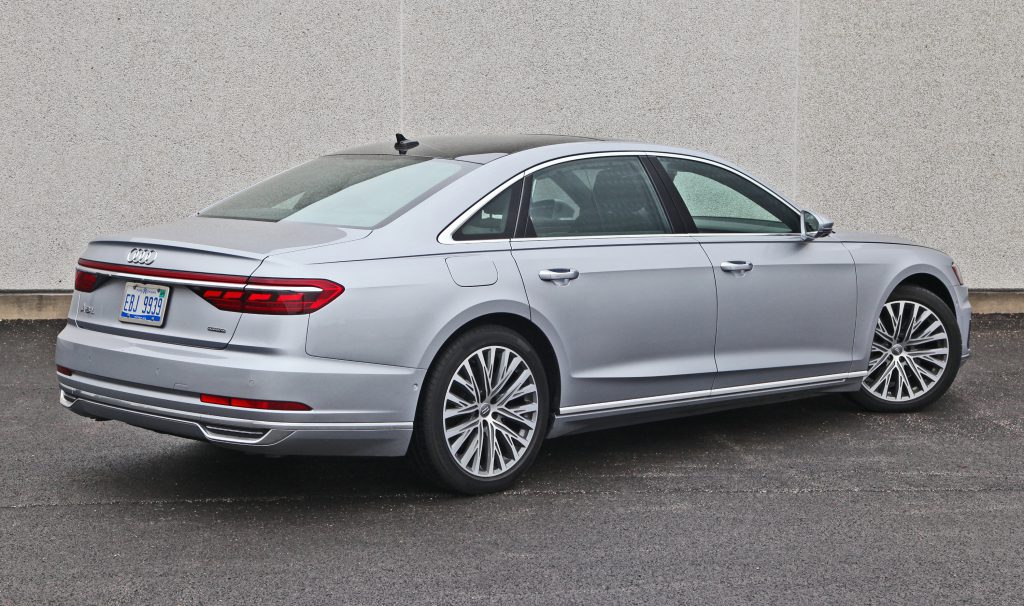 The the only engine available in the Audi A8 for 2019 is a turbocharged 3.0-liter V6 augmented by mild-hybrid assist.

Make no mistake: This is a big car. Wheelbase of the stretched A8 L—the only type offered for sale in the U.S.—is 123.1 inches, and body length extends to 208.7 inches. For context, in the “good, old days” of American tanks, the 1968 Mercury Marquis had a 123-inch wheelbase, and a ’61 Chevy Impala was 209.3 inches long. The new fourth-generation A8’s ample dimensions are carved out of a reengineered body structure that encases a raft of all-new technology features. There’s a different powertrain too.

The A8 cabin is roomy and well appointed regardless of seating position. Our test car was outfitted with Sarder Brown leather seats.

For the current model, Audi turns to a 3.0-liter V6, which sounds like no change at all until you consider that this one is turbocharged instead of supercharged, and it incorporates 48-volt “mild-hybrid” technology in its stop/start mechanism. Though the 335-horse turbo mill gains a mere two horsepower from its supercharged predecessor, it makes much more torque—369 lb-ft. peaking from 1370 to 4500 rpm. Paired up with an 8-speed automatic transmission, the nearly 4800-pound all-wheel-drive sedan steps out briskly with quiet and smoothness, getting to 60 mph in 5.6 seconds, Audi says. There’s slightly heightened snap when “Dynamic” mode—one of four available driving flavors—is activated, but even then, the car remains more tourer than terror. 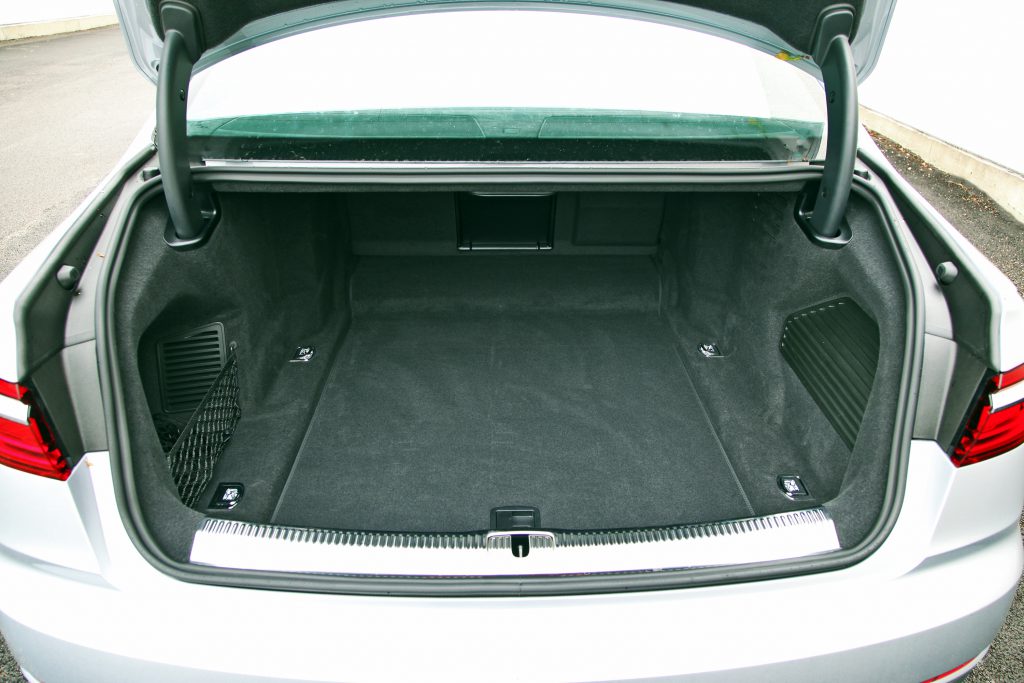 The A8’s available 12.5 cubic feet of trunk space should be enough for routine hauling. The cargo hold is usefully shaped and nicely finished.

The belt-alternator-starter hybrid element gives an electric nudge to the gas engine in pursuit of better fuel economy. Still, no one should be surprised that a premium-large-class sedan isn’t atop the fuel-conservation charts. The EPA estimates an A8 for 19 mpg in city operation, 27 mpg out on the highway, and 22 combined. This reviewer recorded just 17.5 mpg after wheeling Consumer Guide’s Florett Silver Metallic test car for 226 miles, 70 percent of that in city-style driving.

Audi claims to have firmed up the core of its flagship sedan, imbuing it with a body structure of 58 percent aluminum and portions of carbon-fiber-reinforced polymer. Underpinned by the standard adaptive air suspension, it rides serenely in base “Comfort” mode (even on optional 20-inch wheels), with a slightly firmer—but still cosseting—feel in Dynamic. Steering feel makes the same very subtle transition between modes. In terms of handling, it does not feel like a big thing that’s being lugged around; it’s more controllable. It also brakes quite well with little of the pedal vagueness that not-so-mild hybrids usually exhibit.

Passenger space is exemplary, particularly in back, where virtually no occupants of the two outboard seats will lack for legroom. The car has a tall driveline tunnel, usually the kiss of death for 3-across adult seating in back, but there’s so much footwell space that corner passengers could easily make room for someone in the center who has to straddle the hump. Headroom is ample—even marginally more so in back, though our hypothetical middle rider ought to be a sub-6-footer. Seating is comfortable, with good side bolstering of the front seats. The test car was kitted out with the Executive and Rear Seat Comfort option packages, which brought 22-way-adjustable massaging front seats (and it’s a forceful massage), and ventilated massaging outboard rear seats with power-adjustable cushions and back rests. Doors open wide for easy pass-through, and reasonable roof pillars open up good driver vision, even over the shoulder.

Interior fittings start out pretty luxurious, with leather seat upholstery, wood dashboard and door accents, and tasteful bright-metal highlights. It can get even plusher with extras like an extended leather package that puts hides on more surfaces, heated armrests, Alcantara headliner, and an ionizer and interior fragrance dispenser. 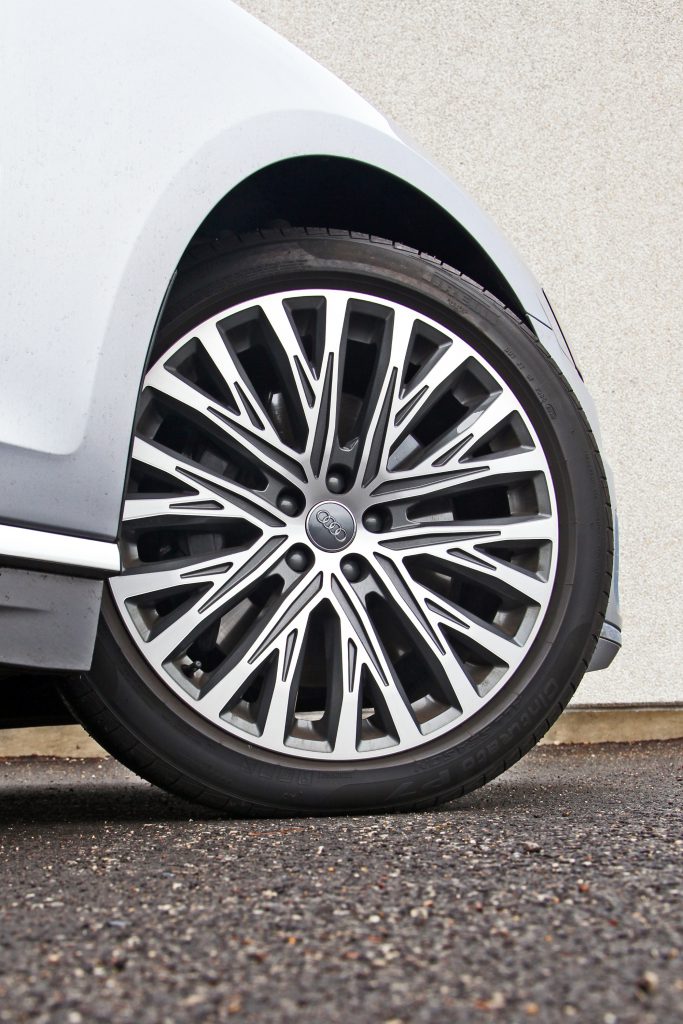 Long piano-black panels impart a coolly modern look on the instrument panel, but that’s only when the audio and climate systems are switched off. The dash houses two large touchscreens, one above the other. The upper one displays audio, navigation, and various connectivity features, while the lower one governs the standard 4-zone climate system. Both have haptic controls that require a positive press—sometimes two—to get any action. This is the latest iteration of Audi’s MMI infotainment interface, now without the console-mounted control dial to which we never really warmed because of all the hand-eye coordination it demanded from anyone trying to operate it smoothly while driving. There’s still some challenge in doing what should be intuitive things like selecting and saving radio stations, but the new MMI is an improvement.

Trunk space is generous by most standards, but the flat floor narrows somewhat between the wheel houses. Liftover is low and the opening is broad. A left-side cubby with a net side is available to hold incidentals. A central pass-through allows for a long object to extend into the back-seat area. Cabin storage utilizes a worthwhile glove box, covered cup holders in the console, a net pouch on the passenger side of the transmission hump, and door pockets. The test car had the extra-cost wireless charger, which takes up most of the space under the split-top lid of the console box. Digital-device inputs are in there, too. Rear storage includes smaller door pockets, hard-sided pouches on the front seat backs, and a pull-down center armrest with a shallow covered space and pop-out cup holders.

There’s only one trim level for the A8, but there’s plenty of extra equipment for buyers who want more. The $84,795 starting price (with delivery) shot up to $101,095 on CG’s test car with six option packages—and that wasn’t all of them. Items like a panoramic moonroof, configurable “virtual cockpit” driving controls, and Bang & Olufsen sound system are standard, but it took option groups to furnish a heated steering wheel, head-up display, 360-degree top-view camera, and more. At least there will be lots of room for your checkbook in the 2019 Audi A8 L. 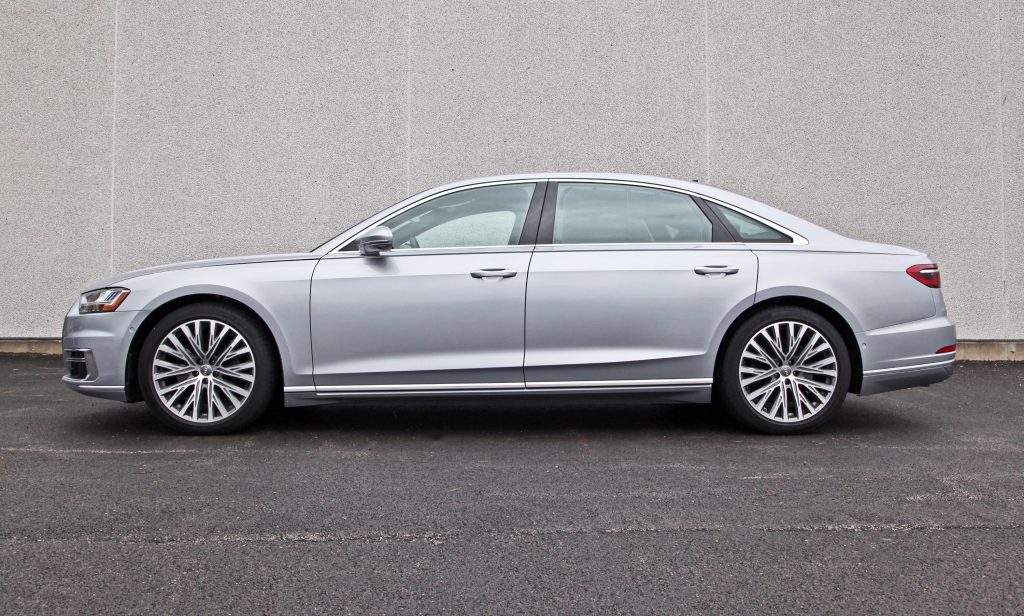 For 2019, the A8 is available in the U.S. only in long-wheelbase A8L guise. The standard A8 available in other markets rides on a 118-inch wheelbase, about 5 inches less than the A8L.