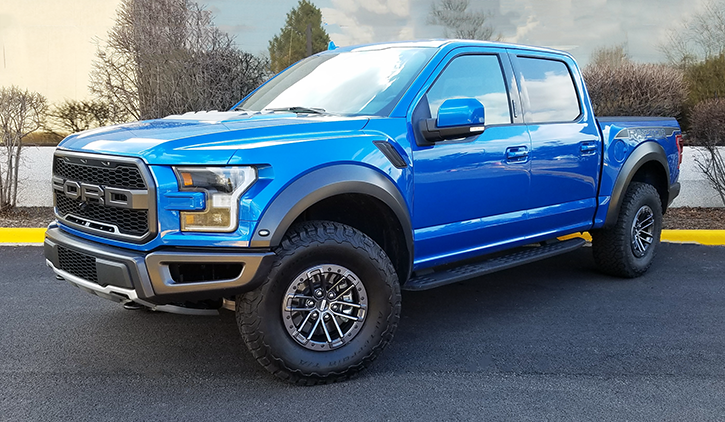 The good: Distinctive styling inside and out; nicely appointed interior

You would expect a vehicle named “Raptor” to have claws—figuratively of course. In the case of the Ford F-150 Raptor pickup, you would be right.

This Raptor is Ford’s high-stepping, high-performance off-road specialist that seems like it would be much happier bounding over desert terrain than being penned up in rush-hour expressway traffic. Indeed, the 2019 version ushers in a couple of improvements designed to help it do the former better. 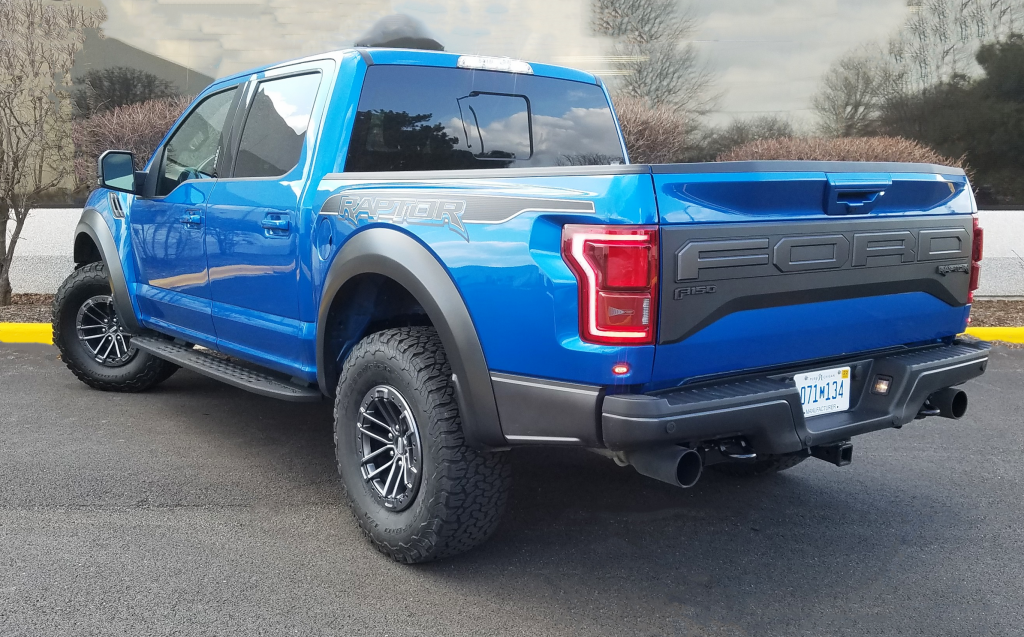 Coming or going, the Raptor looks appropriately macho. The bulging fenders are wide enough to require separate clearance lights under the taillights and on the front fender flares.

In most ways, though, the latest Raptor comes from the same mold as the 2017 model, which saw its rebirth after a first generation that was produced from 2009 to 2014. Raptors are confined to two of the F-150’s three available cab styles—extended SuperCab and full-4-door SuperCrew—and just one cargo bed, the “shorty” 5.5-foot box. Wide fender flares, huge 315/70R17 off-road tires, skid plates, and a specialized suspension are standard. Relative to other 4-wheel-drive Ford pickups, the Raptor’s 11.5-inch ground clearance is as much as 2.2 inches greater and wheel treads are six inches wider, but front and rear body overhangs are minimally shorter.

The Raptor’s cabin has an upscale performance look with plenty of distinctive touches, including nicely bolstered Recaro front sport seats and a red hashmark on top of the steering wheel (a quick-reference aid for wheel centering).

Putting it all in motion is a 3.5-liter EcoBoost turbocharged V6, albeit a high-output version rated at 450 horsepower and 510 lb-ft of torque. (Formerly exclusive to the Raptor, this powerplant is now standard in the luxury-class F-150 Limited as well.) The transmission is a 10-speed automatic. 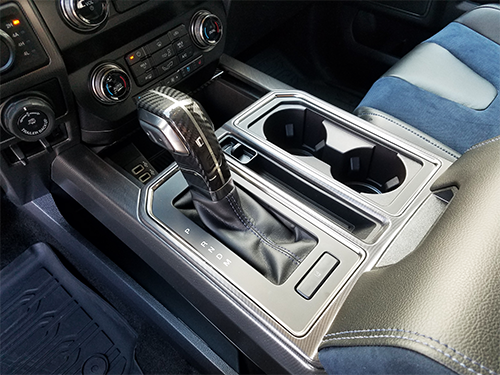 The shift lever has a glossy carbon-fiber look that adds to the Raptor interior’s high-performance ambiance.

Ford tweaks this formula in 2019 by giving the Raptor improved Fox-brand shock absorbers and Trail Control. The shocks now have electronically controlled adaptive valves. Trail Control serves as a type of cruise-control system that adjusts power and braking to each wheel at speeds from one to 20 mph—handy for negotiating rugged terrain. Recaro sport seats for driver and front passenger are new, as is the alloy-wheel design.

Consumer Guide sampled a Velocity Blue SuperCrew that was as spacious as all outdoors. The cab configuration offers exceptional leg- and headroom in both rows, and the wide rear seat and flat floor easily accommodate 3-abreast seating by adults. Doors open wide, so entries and exits are easy, but the elevated stance proves the worth of the standard cast-aluminum running boards. Large windows enhance driver vision, however a glance over the left shoulder looks right into a substantial B-pillar. The optional blind-spot monitoring system—which can also look out for a towed trailer—takes some of the guesswork out of lane changes.

There are lots of places to store personal items around the cabin. A split-level glove box and a cavernous covered console box with an adjustable tray are the most ample. There’s a cutout in the side of the console on the passenger side and a small exposed bin at the front of the console with a pair of USB ports. Long pockets with space for bottles are found in all doors. Rear passengers are presented with pouches on the backs of the front seats. The console holds four open cup holders—two of which are accessible to rear-seat occupants—and the pull-down center armrest in back incorporates two more. The 60/40 rear seat backs fold flat, and the cushions flip up at the tug of a cord to expose a wide, flat interior cargo floor.

Raptors come only with the F-150’s “short” 5.5-foot pickup bed. The $595 spray-in bedliner provides a protective, usefully grippy surface, and the $375 tailgate step makes getting in and out of the bed much easier.

The Recaro front seats are very comfortable. Considerable side bolstering and blue Alcantara inserts make it easier to stay put in them when the ride gets rough. The rear seats in crew cabs have room for some seat-back rake, and even the firmer middle position should be tolerable to be on. Soft-surface material on the dash and front doors disappears in back—even the door armrests are covered in grained plastic. 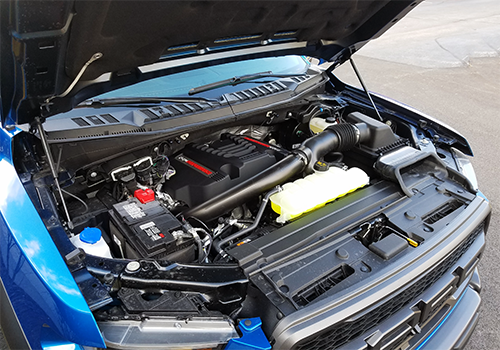 The Raptor’s lone powerplant is a muscular high-output turbocharged 3.5-liter V6 that makes 450 horsepower and 510 lb-ft of torque.

Big tachometer and speedometer dials are easy to read, as is a large configurable vehicle-information display managed via thumb buttons on the steering wheel. The Sync3 infotainment system utilizes a vibrant 8-inch touchscreen, but with helpful knobs for audio power, volume, and frequency tuning. Climate controls—with dials to regulate temperature and repetitive-push buttons for other functions, some placed very low—are situated below the audio controls.

The combination of lots of engine power, a fine transmission, and 4.10:1 drive gears makes the Raptor a force to be reckoned with. Confined to the urban jungle, we didn’t get to do any dune-bombing, but it’s impossible to resist dipping into the throttle on streets and highways to feel the forceful jump and prompt a grumble from the exhaust. “Sport” mode changes the timing of trans shifts, which are quicker and more positive. None of this makes for particularly frugal operation. EPA fuel-economy estimates for the Raptor are just 15 mpg in city driving, 18 for highway operation, and 16 combined. This reviewer scored just 14.8 mpg after logging 172 miles, 60 percent of which was in city-style driving.

Out of the element for which it was designed, ride and handling aren’t as much fun to live with. The long-travel suspension that the Raptor needs to soak up leaps and hops out in the wild can feel a little pitchy on the street, and the very nubby, tall-sidewall off-road tires set up vibration in expressway driving. Steering feels somewhat heavy, but braking is strong. Make no mistake: The Raptor is well prepared for its primary duty. It comes with a terrain-management system that adjusts engine, transmission, drivetrain, braking, and stability control in line with a menu of selectable modes that include “Normal,” “Weather,” “Mud and Sand,” “Baja,” and “Rock Crawl.” A Torsen limited-slip front axle is optionally available.

With delivery, a Raptor SuperCrew starts at $57,435. But that’s just a starting point. As the breakout atop this review attests, there are plenty of things that can be added to the truck—particularly an extensive equipment group—that pushed the test vehicle to the threshold of $75,000.

Those claws we mentioned? If you’re not careful, they’ll get deep into your pocket. 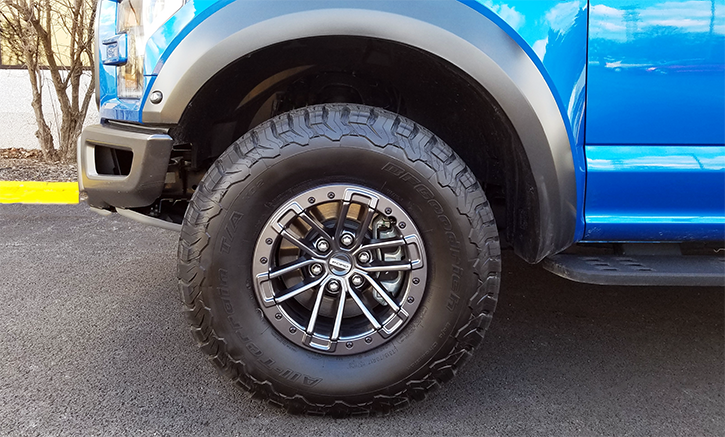 These aggressive-looking 17-inch forged aluminum wheels are an $1895 option.