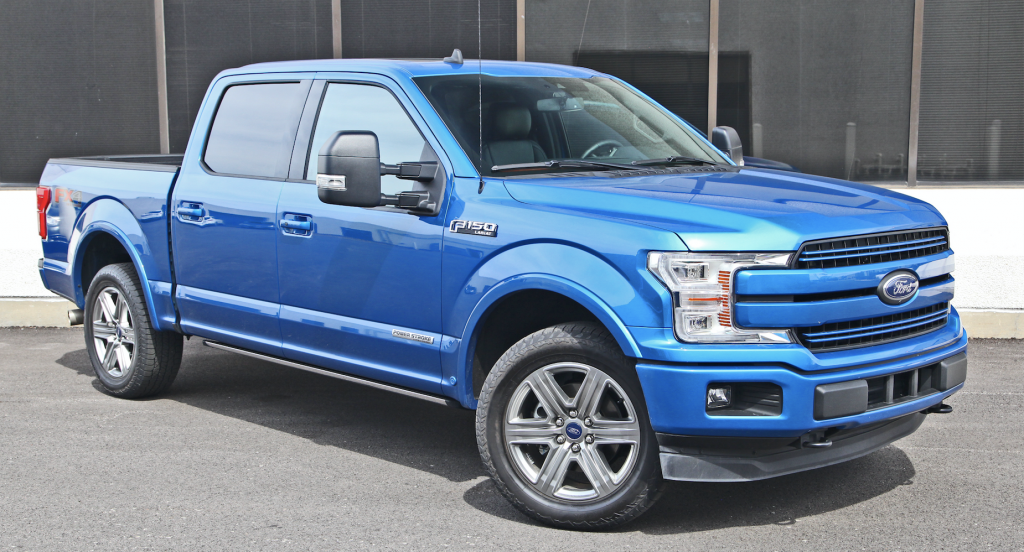 The not so good: Ride can get bouncy over rough roads, front and side visibility 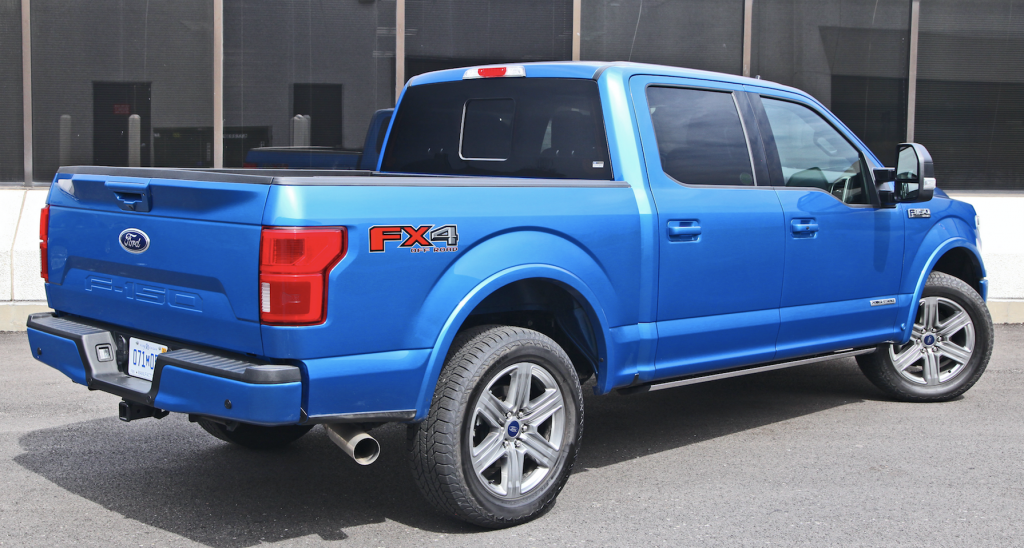 Besides the $4000 Power Stroke turbodiesel engine, our tester was fitted with more than $18,000 worth of options that brought the bottom line to more than $68,000 — though that’s not an unusually lofty “big truck” sticker these days.

That’s not just momentum. Although the current tally is 41 straight years atop the “Best Seller” list, the F-150 continues to add features since its bold 2015 redesign, in which it made the move to largely aluminum body construction. The result of that was not only a body thought to be less prone to the ravages of time (though this has not yet been proven), but also one that shaved off roughly 750 pounds (which has). Powertrain choices included a base 3.5-liter V6, 2.7- and 3.5-liter EcoBoost turbocharged V6s, and a 5.0-liter V8, all mated to a 6-speed automatic transmission.

Last year, the F-150 received not only a styling update, but also some powertrain revisions. The base 3.5 was replaced by a 3.3-liter V6, the EcoBoost and V8 engines were treated to a 10-speed automatic, and – significantly – a new engine arrived in the form of a 3.0-liter Power Stroke turbodiesel V6 rated at 250 horsepower and a stout 440 lb. ft. of torque, also mated to a 10-speed automatic. It was this Power Stroke turbodiesel that powered our 2019 test vehicle. In about the only 2019 news of note, the high-performance, off-road-oriented Raptor’s mighty High Output 3.5-liter EcoBoost V6 (450 horsepower/510 lb. ft. of torque vs. 375/470) is available in the luxury-oriented Limited — though that’s really news of note.

It wasn’t as ritzy inside as the previously tested Platinum, but our Lariat was trimmed out nicely enough. Strengths include great storage space, available adjustable pedals, and an easy-to-use infotainment system.

As our tester was otherwise similar to the 2018 4×4 SuperCrew Platinum with 5.0-liter V8 tested last year, we invite you to read that report for more details. Here we’ll concentrate on the differences, mostly being the result of the turbodiesel engine.

Turbodiesels have had greater consumer acceptance in trucks than they have in cars, partly because their greater cost is more readily absorbed if the vehicle they’re in costs a bunch in the first place. And our tester certainly cost a bunch: Starting at $49,580 including destination, the turbodiesel itself added $4000, with other options adding another $16,520 for a bottom line of $68,100 after $2000 in package discounts.

What makes turbodiesels attractive is not just their promise of higher fuel economy – much of which is often offset by higher fuel cost – but also that their tremendous low-end torque makes them perfect for pulling heavy loads (which you typically don’t do in a car). They also perform better at high altitudes than normally aspirated engines (those without turbochargers or superchargers), as they’re less affected by the lower levels of oxygen, though this applies to all “boosted” engines, whether gas or diesel.

As the 2018 was fitted with the 5.0-liter V8, it’s interesting to compare that with our turbodiesel tester in terms of specs, fuel economy, and 0-60 times. And though they were certainly different in these regards, the differences were not really surprising. 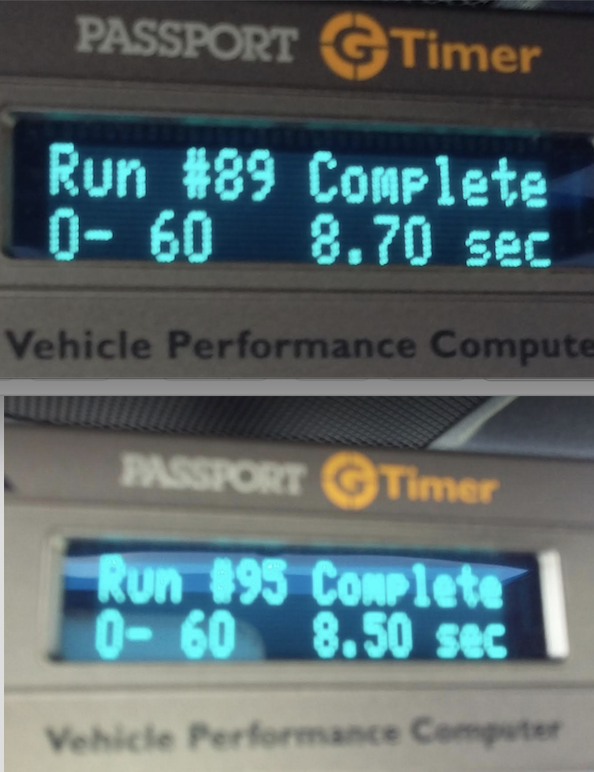 Although hardly blistering — as was the V8 version tested previously — the turbodiesel put down some solid 0-60 numbers, averaging 8.7 seconds in 2WD, 8.5 in 4WD.

With the 5.0-liter gas V8 — which is rated at 395 horsepower/400 lb. ft. of torque — our 2018 model returned 18.8 mpg during my stint of mostly highway driving and averaged an impressively quick 6.15 seconds 0-60 (making it the quickest big pickup I’ve timed, at least partially the result of the lightweight aluminum body panels). By contrast, the turbodiesel’s figures are 250/440, 26.0 mpg – also in mostly highway driving – and an average of 8.7 seconds 0-60 (8.5 in 4WD, which reduced off-the-line tire slip). So the turbodiesel was far thriftier but also markedly slower, though hardly “slow.” It also isn’t quite as responsive to throttle inputs; nail the throttle from a stop, and the truck moves out rather timidly, then really takes off, with full-throttle kickdown response coming in a bit slower than with the V8. Towing capacities for the turbodiesel and the V8 are about the same, topping out at a little more than 11,000 lbs. (With the “top towing” 3.5-liter EcoBoost V6, maximum towing capacity is about 13,000 lbs.) The only other dynamic limitation is in ride quality over rough pavement, where the F-150 exhibits some chassis reverberations typical of big pickups. 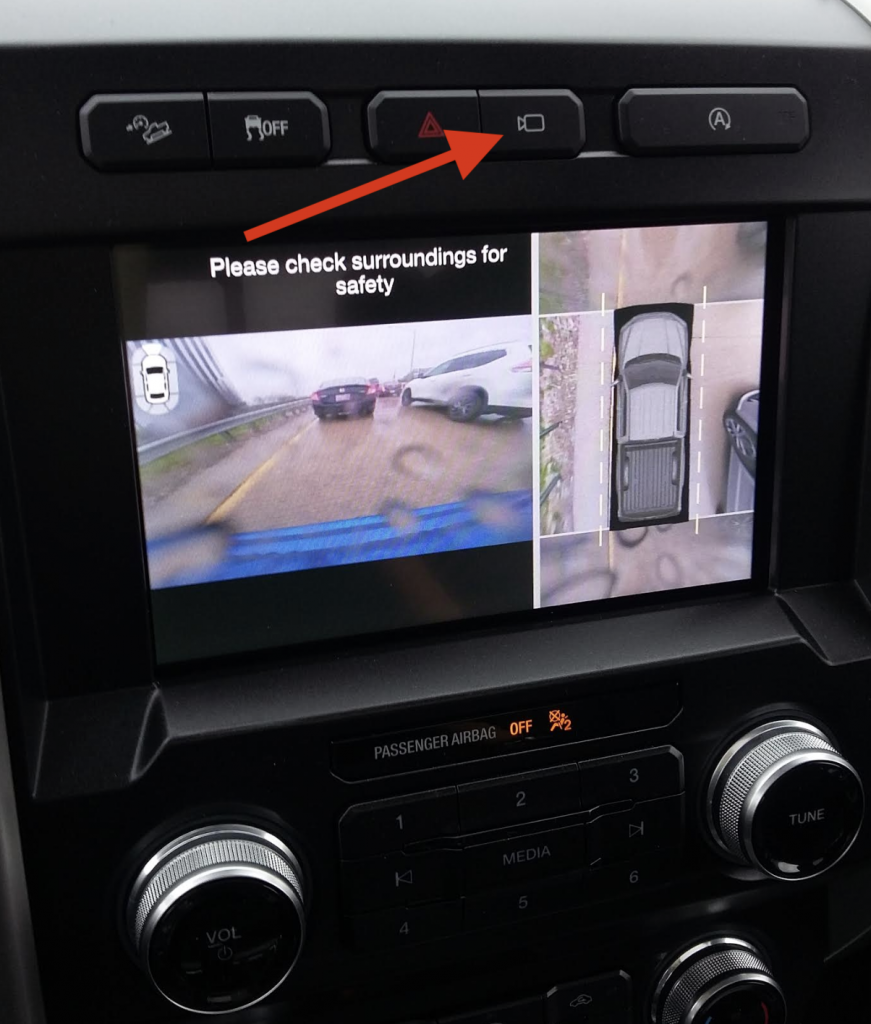 The optional 360-degree camera system can be activated with a simple press of a handy dashboard button.

Those last two — and one other feature — are worth noting. The 360-degree camera system really helps when parking — especially because visibility (except to the rear corners) isn’t very good due to thick roof pillars — and it can be easily activated with the press of a dashboard button. And though when loading some heavy cargo into the bed I initially bemoaned the lack of a built-in or fold-down bumper step — as found on many rivals — I discovered the pull-out tailgate step with handle that takes a little more effort to deploy, but works very well. Also, the adjustable pedals are a boon to shorter folks, and their setting is included with the seat/steering wheel/mirror memory.

Otherwise, the strengths of the F-150 continue to be great interior room (in Crew Cab form, at least) and great interior storage capabilities, though both tend to be good in rivals as well. But that and the F-150’s other qualities are enough to make it a strong contender in a class of newer rivals, as this is one truck that refuses to show its age.

F-150 continues to be the best-selling full-size pickup, even though rivals are newer. Lightweight aluminum body construction helps both acceleration and fuel economy — and is unique in the class — while the thrifty new turbodiesel aids the cause; it’s one of six engine offerings in the F-150 power portfolio, and one of four that are turbocharged.