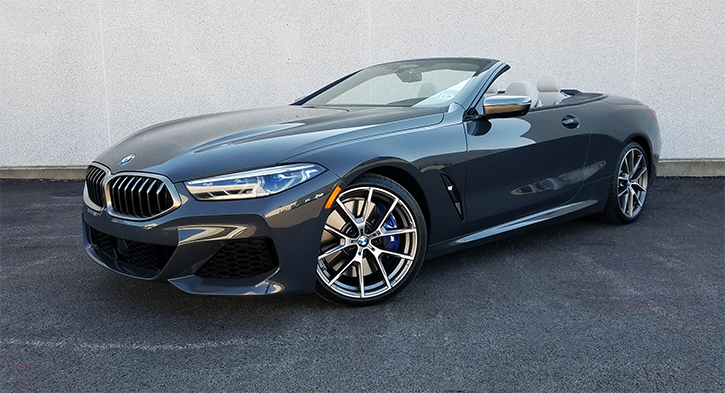 The not so good: Fuel economy; steep pricing

It seems strange to write that you’re getting off easy, pricewise, with a car that costs $122,395. It’s probably pretty strange to read it, too. That considerable sum is the starting price with delivery of the all-new BWM M850i xDrive convertible, but it would take another $21,100 to secure a similarly bodied M8, or $34,100 for an M8 Competition. 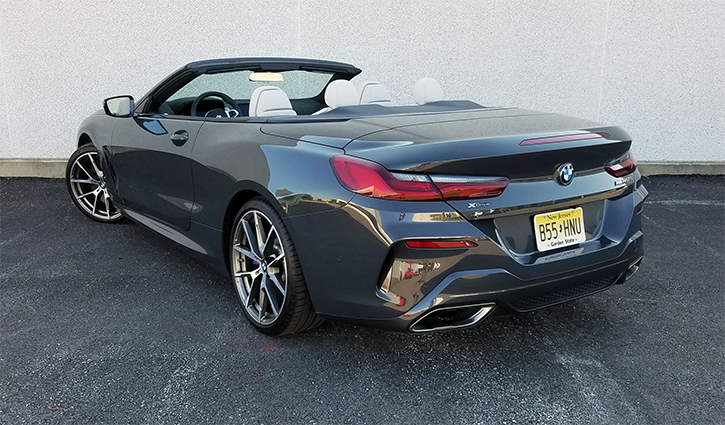 The 850i’s soft top powers open or closed in about 15 seconds. Top down, wind buffeting is minimal, and the optional neck warmer helps keep front-seat occupants cozy on chilly nights.

The convertible is part of a 3-pronged 8-Series that initially replaces the premium-sporty/performance-class 6-Series coupe and convertible. The transition starts for model-year 2019 with 8-Series coupes and convertibles, to be followed by a 2020 Gran Coupe low-roof 4-door sedan that will supersede a 6-Series car of the same configuration. The V8-powered M850i convertible costs $9500 more than its coupe companion—and then there are 6-cylinder 840i versions of both body styles that are cheaper still.

The M850i’s luxurious cabin is sumptuous by day, and even more dazzling at night–thanks to the configurable ambient cabin lighting, the ambiance can best be described as “chic nightclub.”

The 850is come with xDrive all-wheel drive. They also bear M Sport features, a lighter touch of the treatment given to true “M” vehicles by BMW’s performance-development division. Put it all together and it comes out M850i xDrive, as in the convertible that Consumer Guide tested. 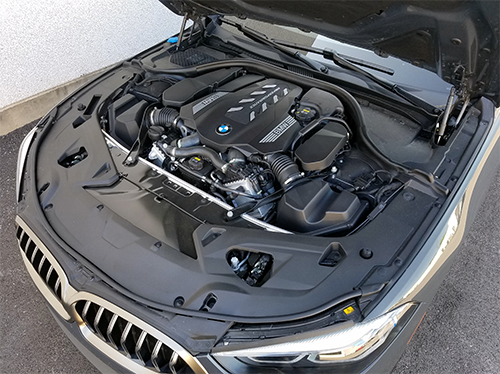 The twin-turbocharged powerplant displaces 4.4 liters, and produces 523 horsepower at 6000 rpm and 553 lb-ft of torque at 1800 rpm. Throttle response is quick and robust from a stop or at lower speeds. (BMW says the 4736-pound convertible with go 0-60 mph in 3.8 seconds.) Advancing from “fast” to “faster” on the highway comes with a lot of pedal travel before the 8-speed automatic transmission kicks down and rockets the car ahead again, but by then the M850i is going at a pretty good pace anyway. Selectable “Sport” and “Sport+” driving modes coax crisper, more positive shifts from the transmission—and that’s if you don’t take matters into your own hands via the standard steering-wheel shifter paddles. Entering Sport+ also uncorks a snarly exhaust rap that makes the M850i sound like it means business.

The EPA figures that this powerteam should deliver 17 miles to a gallon of premium gasoline in city driving, 26 mpg on the highway, and 20 combined. However, when this driver put 176 miles on the test car, he averaged 15.8 mpg—and just two-thirds of his driving was in city-style conditions.

Scrolling through the drive settings changes the ride and handling characteristics from almost-pillowy boulevardier (in “Comfort” mode) to more alert and communicative grand tourer. There’s more steering resistance, with a greater sense of precision, in either of the Sport modes. Though it will never be mistaken for an M2 in the “tossability” category, the M850i convertible manages its weight pretty well in cornering. In fact, it is packed with assist features like rear-wheel steering, Adaptive M Suspension with roll stabilization, and M Sport differential. Bump absorption is pretty good—though ride feels firmer in Sport—and the standard uprated M Sport brakes bring things to a halt extremely well.

Convertibles—especially larger ones—all fight against structural flexing. The 8-Series Bimmer does this pretty well. What little sense of flex comes through seems to be more in the mid-body area than at the cowl. It takes 15 seconds for a fully buttoned-up 850i to be wide open, with the fabric top stowed out of sight under the deck, and this can take place while on the move at speeds up to 30 mph. Control of the entire raising and lowering processes is handled by a single button on the console. Even without the wind blocker in place, this driver found buffeting at expressway speeds to be minimal. With the top up and windows closed the cabin stays pretty quiet, but over-the-shoulder visibility is greatly limited. Plus, the “fast” rake of the windshield puts the header close to the driver’s line of sight, which makes being the first in line at an overhanging stop light an exercise in neck craning. 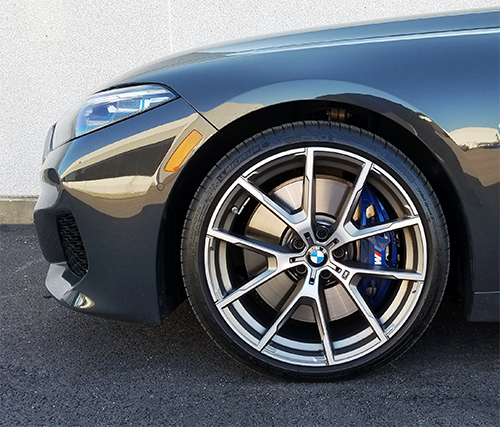 The requirements of top stowage exact a toll on trunk capacity. Where the coupe accommodates 15 cubic feet of cargo, the convertible holds just 12 cubic feet, and items that can’t fit across width of the trunk will have to be short enough to fit under a structure into which the top retracts. Additional hauling capacity is available by folding down the 60/40-split rear seats—and, frankly, that’s a better use for that area than seating passengers. Legroom is virtually nonexistent, but even assuming a front passenger short enough to make some space possible, the rear seat backs are very upright and headroom under the top isn’t sufficient for most adults.

The lucky up-front occupants enjoy good legroom in lushly trimmed surroundings. The heated and ventilated Merino-leather seats offer good comfort and support. Other heated features are the steering wheel and door armrests, and the test car came with an optional neck warmer. “Live Cockpit Professional” displays driving and infotainment information on a pair of screens. There is a digital instrument cluster with essential gauges at the far ends and lots of room for vehicle information in between, plus a screen in the center of the dash for audio, navigation, and other infotainment features. Operation is by voice, touchscreen contact, or iDrive remote control from a dial on the console. The iDrive 7.0 seems to be an improvement over past versions, the reviewer grudgingly admits. (He’s still no unabashed supporter of this or other menu-dense systems that require lots of attention to use fully.) Climate controls are separate and governed by an array of push buttons. Cabin storage facilities—glove box, console box, door pockets, and covered cup holders—are all in the front row.

Apple CarPlay smartphone compatibility, wireless charging, and a Wi-Fi hotspot are among standard technology features. However, things like active blind-spot detection, lane-departure warning, front collision warning and mitigation, and a surround-view camera were included in an option package for a test car that topped out at $131,395. You could say that’s “getting off easy” the hard way.

.. or down. Either way, this decadent droptop impresses for its dual-personality nature; it transforms from a powerful-yet-cushy cruiser in Comfort mode to a surprisingly snarly sports machine in the Sport and Sport+ modes.