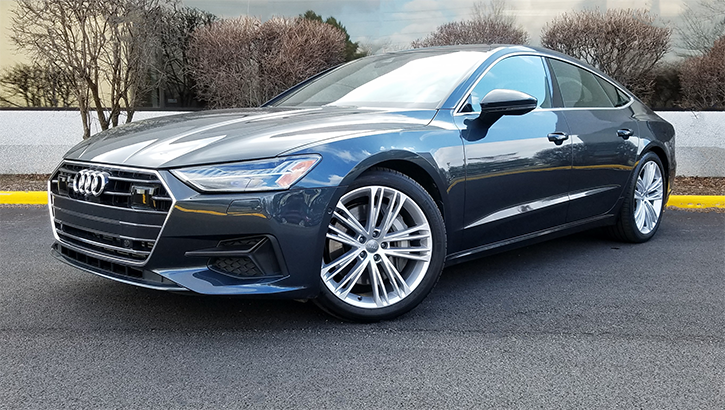 The not so good: Though MMI infotainment system is improved, some controls are still complex

More A7 price and availability information

If you’re a car, sleek and swift are two good things to be, and the Audi A7 is both of those things. New isn’t a bad thing to be, either, and the 2019 A7 is that as well.

Audi’s premium-midsize hatchback sedan rolls out new styling from the outside in, a significant change to its infotainment system, and a reconfigured powerplant. Its timing is as impeccable as its interior because the class has its share of redesigned models from the likes of Lexus, Mercedes-Benz, and Volvo. 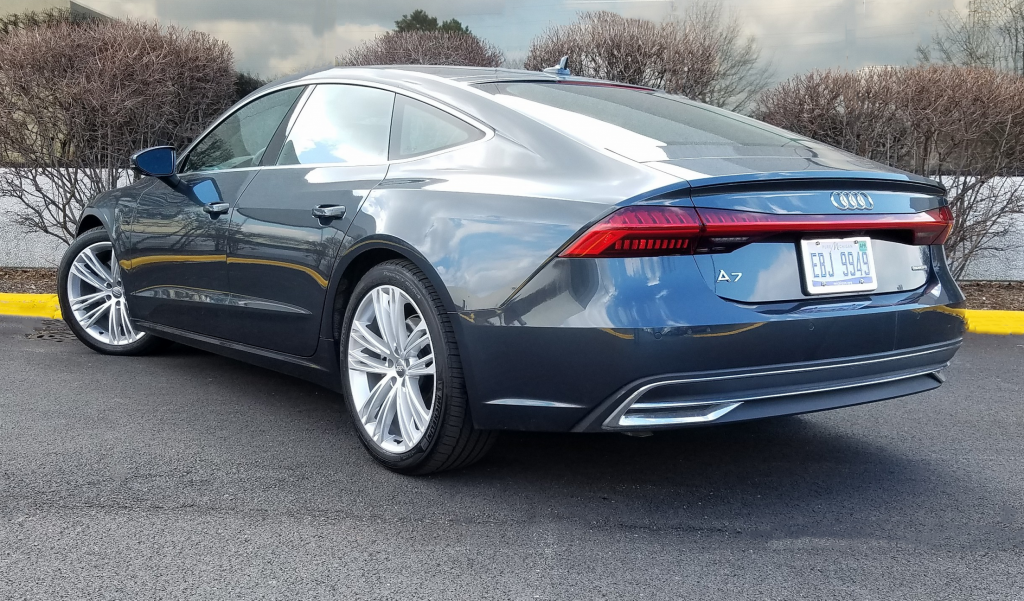 The Audi A7’s styling is as sleek and swoopy as ever, but the 2019 redesign brings a crisper, harder-edged look.

The general shape and body configuration of the new A7 is much like the first-generation job, with a long, low, near-fastback profile. Dimensions of the two are fairly similar, though the 2019 model picks up a half-inch of wheelbase (to 115.2 inches) even as its overall length retreats by 0.6 inches. Keen observers will note changes in the hood, grille, headlights, and lower fascia. In back, taillights now extend fully across the car.

Interior restyling is centered around a completely new instrument panel that houses two large screens. The 8.8- or 10.1-inch upper one shows audio, navigation, and access to various connectivity features, while the 8.6-inch lower one displays climate-control settings. Both screens are touchscreens with haptic controls that require a positive press to make desired inputs.

Audi’s latest new products are hitting especially high marks on interior fit and finish, and the new A7 is no exception–especially when equipped with the $3200 Individual Contour seating package. The sloping roofline compromises headroom for tall rear-seat passengers.

If this sounds as if Audi has done away with its MMI infotainment interface, it hasn’t—it just eliminated the console-mounted dial that required a fair amount of hand-eye coordination for any driver trying to locate and activate some electronic amenity while doing a bit of driving on the side. There’s still a lot of complexity involved in doing simple things like selecting and saving radio stations, but for this tester, a hardcore critic of the old MMI (and other brands’ remotely controlled systems), the new MMI seems less objectionable. The older climate controls were conventional dials and buttons, and didn’t rely on the MMI. The new screen has large, colorful graphics that are easy to discern and use.

In addition to style, the A7’s hatchback rear configuration provides more outright cargo volume (24.9 cubic feet, versus 13.7 cu. ft. in the A6 sedan), as well as an extra degree of versatility.

A 3.0-liter V6 still resides underhood, but now it is turbocharged instead of supercharged, and employs 48-volt “mild-hybrid” technology and a stop/start system. At 335 horsepower, the turbo V6 is down five ponies from its supercharged forebear, but there’s considerably more torque at 369 lb-ft., and that’s what gets you going. It’s genteel power, too—smoothness and strength without noise. Audi has definitely opted for grand tourer over muscle machine.

Selectable drive modes—“Comfort,” “Dynamic,” “Auto,” and “Individual”—promise different sensations in throttle response and steering weight. In practice, though, the gradation between Comfort and sportier Dynamic is fairly slight. In either setting the A7 steps lightly over road cracks and pavement joints, and even was impressively resistant to Chicago expressway potholes while rolling on optional 20-inch alloy wheels. Vertical body motions are well restrained, and lean during cornering is nicely locked down. To aid high-speed handling, a decklid spoiler deploys automatically at 72 mph. What the car lacks in steering feel it makes up in precision.

With a 7-speed automatic transmission parsing the power, the A7 is rated at 22 mpg in the city, 29 mpg on the highway, and 25 combined by the EPA. Consumer Guide editors attained 21.1 mpg with 60 percent of their aggregate miles chalked up in city-type operation. 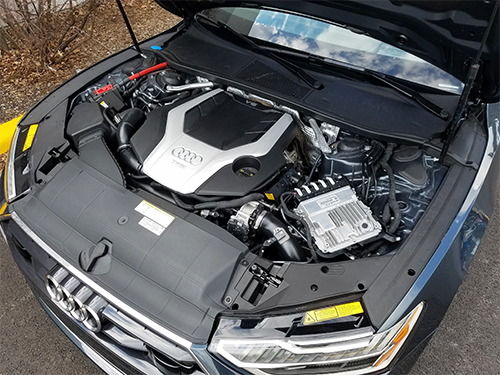 The A7’s turbocharged 3.0-liter V6 uses a 48-volt “mild-hybrid” system and puts out a satisfying 335 horsepower and 369 pound-feet of torque.

One of the extras, a seating package, brought with it ventilated contoured front seats; upgraded seat leather; full-leather covering for the dashboard, armrests, and console; and birch inlays. It makes for a cabin worthy of Audi’s solid reputation for interior execution. The upgraded seats are pleasingly supportive; the seating position is on the low side.

Legroom is good in both rows. Front headroom may not be abundant under the standard moonroof, but it is better than in back, where the roof slope takes a bite out of overhead space. Surprisingly, entries and exits aren’t especially tricky. Audi claims the A7 is a 5-passenger car, but only four of them can be adults. A substantial floor hump sees to that. While windows aren’t particularly large, only the B-pillars between the doors are thick, so driver vision to most angles is better than you might expect.

Personal-item storage is a little skimpy. The glove box is large but low in the dash. To free up some room within, the owner’s manual is secreted in a covered bin to the left of the steering column. Most of the limited space in the console box was taken up by the wireless digital-device charger. Door pockets are small. Rear passengers get net pouches attached to the backs of the front seats and a shallow covered bin in the pull-down center armrest, which also houses pop-out cup holders.

There’s not much room for tall objects to stand up beneath the elongated power rear hatch, but the cargo area is long. Rear 60/40 seats fold flush with the load floor to extend carrying capacity.

Luxury motoring can come in many forms. Even greatly updated, the Audi A7 sticks with sleek and swift.

The Audi A7’s sleek body style brings with it a significant price premium over its traditional-sedan stablemate, the A6 (which is also redesigned for 2019), but the sexy looks and improved cargo versatility help justify the cost.