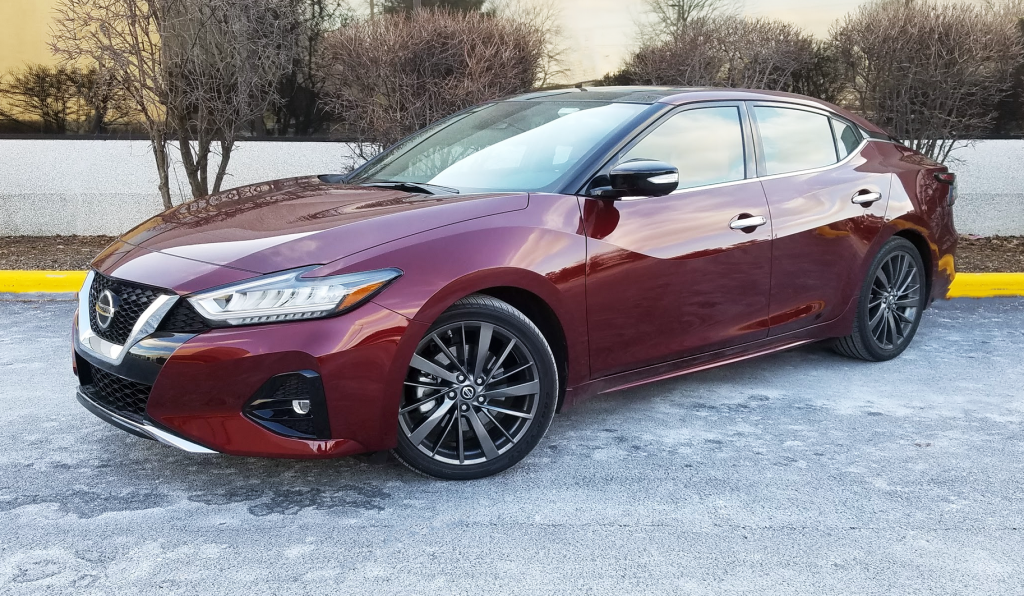 The great: Smooth V6 power, interior ambiance in Platinum Reserve model is a cut above the midsize-sedan norm

The good: Sporty attitude inside and out

The not so good: So-so interior and cargo space, mediocre fuel economy, some testers think the moves don’t quite live up to the looks

For anyone who might be looking forward to a totally new Nissan Maxima, your wait is . . . not over. The 2019 model is considerably spruced up, and it’s got a few more bells and whistles, but it fundamentally is the car it has been since 2016.

In all honesty, that isn’t a particularly long time since introduction—and just far enough out for a freshening. Plus, competitive pressure to update this larger of Nissan’s two midsize sedans is actually lessening as the class thins in the ascendant era of crossover sport-utility vehicles. Similarly priced domestic-brand sedan rivals Chevrolet (Impala), Buick (LaCrosse), and Ford (Taurus) are all getting out of Dodge. 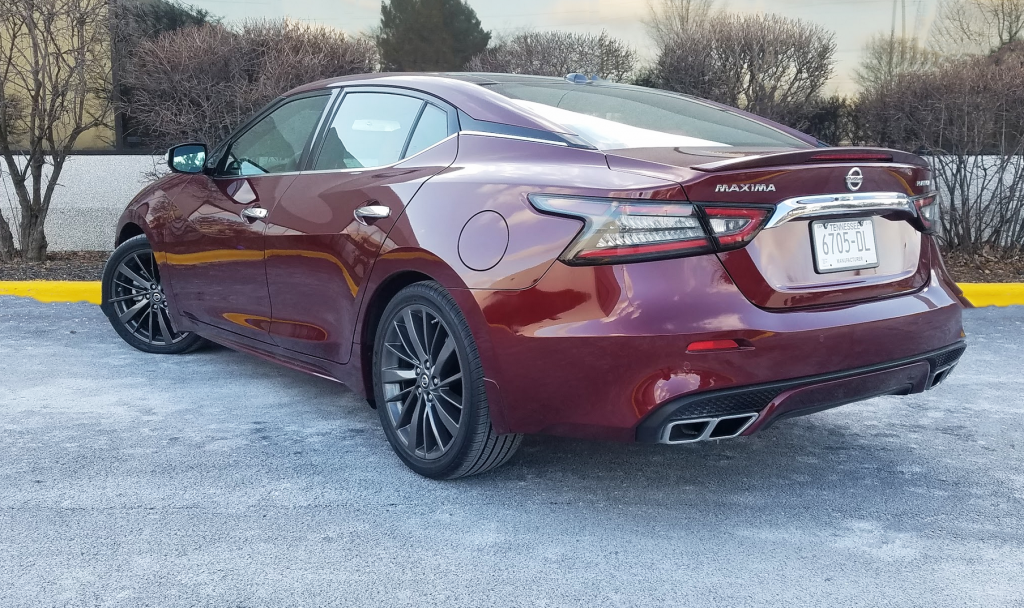 Even though the Maxima’s more sensible sibling, the Nissan Altima, got notably sportier looking with its redesign for 2019, the Maxima still has a slightly more aggressive look–and standard V6 muscle, which can’t be had in the Altima.

The line-topping Maxima Platinum Reserve that Consumer Guide tested was a showcase for what’s new about the car in 2019. It manifested itself in the updated “V-Motion’ grille, front fascia and LED headlights, wheel design, taillights, and rear fascia with quad-tip exhaust finishers. Standard within were an updated navigation system; Amazon Alexa and Google Assistant integration; Rear Door Alert (which warns drivers to check the rear seats for children or pets when exiting); Intelligent Driver Alertness (which warns of drowsy or inattentive driving); and the Safety Shield 360 cluster with forward collision warning and mitigation with pedestrian detection, blind-spot alert, rear cross-traffic alert, rear automatic braking, lane-departure warning, and automatic high beams.

The Maxima’s sporty styling carries over to its interior–the Reserve package steps up the interior ambiance via semi-aniline leather upholstery in a striking Rakuda Tan color, as well as heated rear seats. 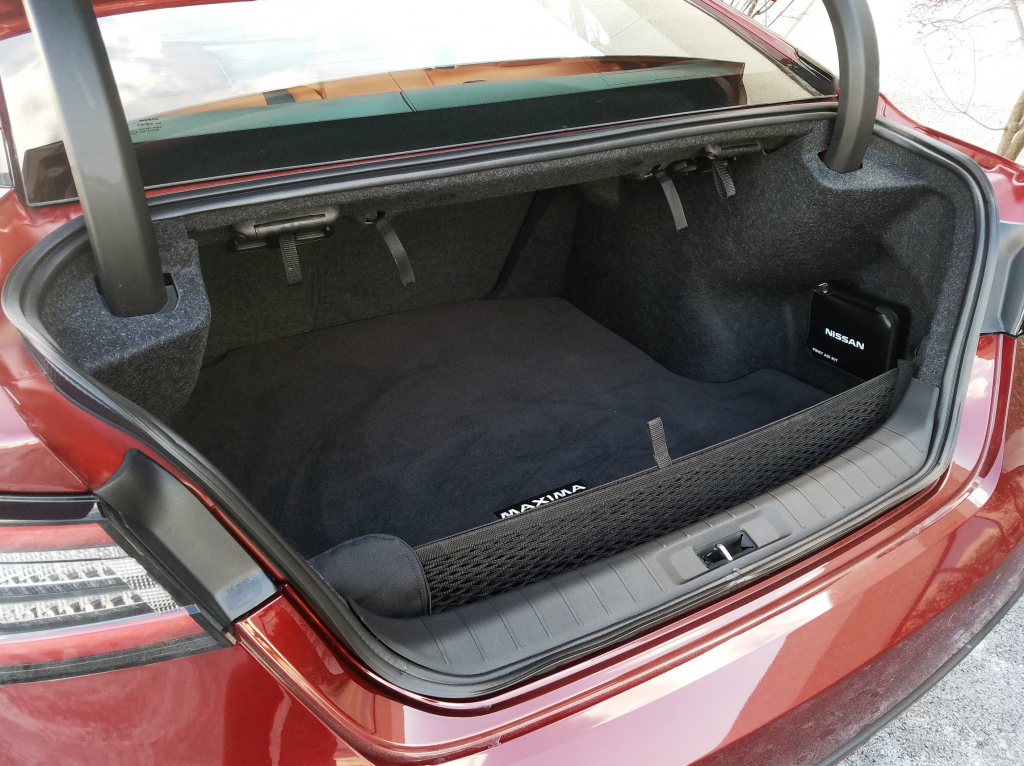 There’s 14.3 cubic feet of cargo volume in the Nissan Maxima’s trunk… a bit less than the norm for a mainstream-brand midsize four-door sedan.

No matter what you pay for a ’19 Maxima, it is going to be powered by a familiar 3.5-liter V6 engine linked to a continuously variable transmission (CVT). It’s a lively powerteam that coolly and quietly goes about its business, whether in surface-street stop-and-go or cruising the highway. The engine makes 300 horsepower at 6400 rpm and 261 lb-ft of torque at 4400 revs. The “XTronic” trans incorporates shift logic that does away with the sense of not-so-quiet desperation that plagues many CVTs. EPA estimates for fuel economy are 20 mpg in the city, 30 mpg on the highway, and 24 mpg combined. However, this driver’s 203-mile test stint—with 63 percent city-type driving—turned up just 19.2 mpg.

A drive-mode selector summons a “Sport” setting that, in the Platinum, has an impact on ride and handling, albeit slightly so. The easy but somewhat vague steering exhibits a little bit more heft, and there’s a smidgeon more snap through the body when driving over surface irregularities. With Sport or without, the Maxima falls short of its sport-sedan image—but it is undeniably comfortable to ride in.

The Reserve’s premium interior is clad in Rakuda Tan leather on the seats, armrests, and inner portion of the steering wheel. This saddle-like color is reprised in contrast stitching on black portions of the interior like the doors, console, and dash. Flexible, padded soft materials are seemingly everywhere save for the lower doors and dash. Gauges and vehicle-information readouts are clear and easy to work through thanks to well-positioned buttons on the steering wheel. Audio-system programming and operation benefit from external tuning and volume knobs. Dual-zone climate controls use dials for temperature settings and a few clearly marked buttons for other system functions.

Most cabin storage is handled by a low-slung glovebox and a fairly large covered console box. Two exposed cup holders rest in the console between the seat-heater dials and a covered bin for device inputs. Second-row storage consists of pouches on the backs of the front seats, and cup holders in a pull-down center armrest. A small pocket with bottle holder is found in each door. 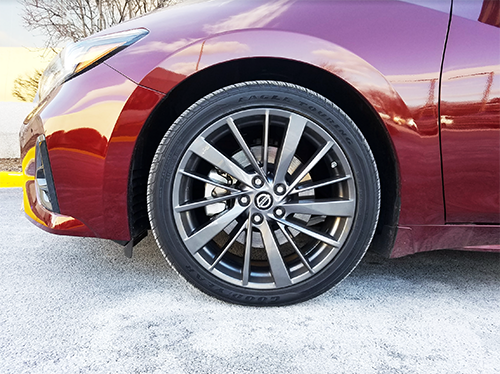 Dark-finish 19-inch wheels are included in the Platinum Reserve package.

It’s hard to find fault with the interior appointments of the Maxima Platinum Reserve (unless you’re not especially fond of orangey leather), but nits can be picked with the passenger and trunk room. Head- and legroom are decent in front but get crowded in back—especially under the moonroof. The rear seat is wide, but the floor layout rules out comfortable seating for three adults. At the same time, the 14.3-cubic-foot trunk is not all that voluminous for a car of the Maxima’s size. That and the “tidy” rear seat are all the more glaring in a car that some—not CG—actually consider to be part of the large-car class. The trunk opening is wide, and rear seats fold in a 60/40 divide to expand cargo room, but the seats don’t fold flat, and a bulkhead narrows the threshold between trunk and interior. Finally, roof shape and windows on the low side stand to hamper driver vision somewhat.

We won’t be the first to suggest that the Maxima’s long-cultivated reputation as the “four-door sports car” has become equal parts hope and hype. But it is rewarding to drive in its own way—especially as V6 sedans became exceedingly rare. If Nissan called its low-roof sedan a four-door coupe—as others have done with similar cars—would its limitations be forgiven?

The refreshed-for-2019 Nissan Maxima might be more desirable to the right buyer by default, as V6-powered midsize sedans of any stripe are fast becoming a rare breed. Whether the Maxima is worth the extra money it commands over Nissan’s redesigned 2019 Altima depends on how much value you place on V6 power and flashier interior trimmings.