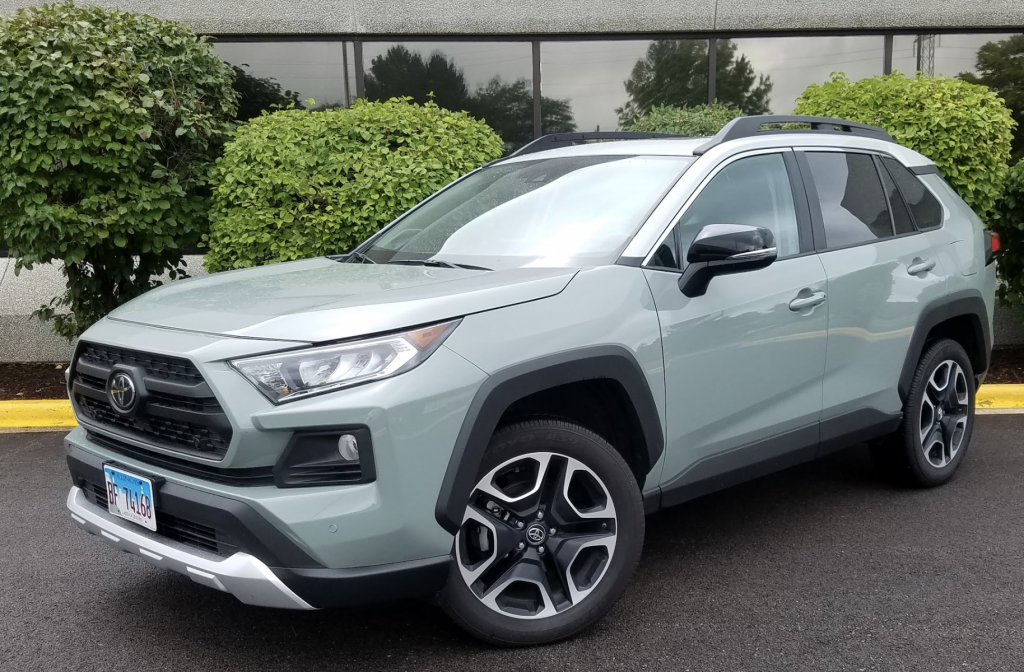 Toyota redesigned its popular RAV4 compact crossover for 2019, with the full model lineup being covered in our First Spin report. But we’ve since delved more deeply into some of the different trim levels offered with Test Drive reports of the top-line Limited and its more frugal brother, the Hybrid Limited.

Yet another variation is covered here. 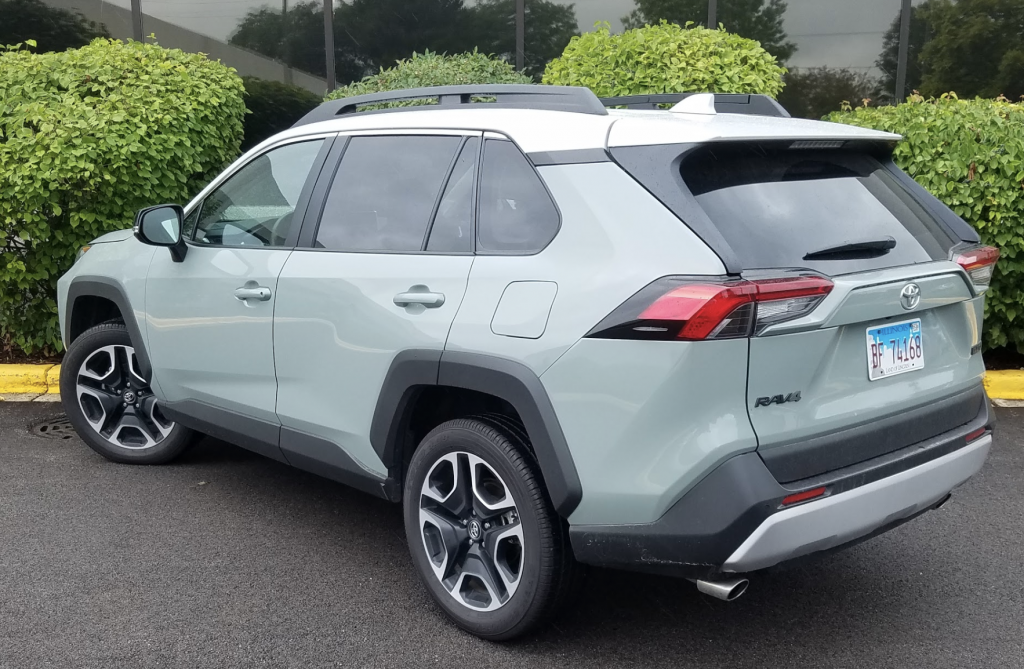 The Adventure makes its mark by offering some specific off-road-oriented equipment along with the ability to tow roughly 2000 pounds more than other RAV4s.

As the name rather suggests, the Adventure is an off-road-oriented model that includes not only some expected off-road-oriented features, but also the unexpected ability to tow heavier trailers — much heavier trailers. For while the other gas models are rated to tow up to 1500 lbs and the Hybrid 1750 lbs, the Adventure has a towing capacity of 3500 lbs. — among the highest of any compact crossover. Other features include a 120-volt AC (household current) outlet in the cargo area, a distinct grille, available white roof, hill-descent control, and drive-mode settings for snow, mud & sand, and rock. If you’re looking for a bit MORE off-road ability than the RAV4 Adventure offers, Toyota has added a RAV4 TRD Off-Road model for 2020.

Contained in the $1265 Adventure Grade Technology Package is the ability to display the rearview-camera image in the rearview mirror, great if people or cargo block your view back.

In other ways, the Adventure mimics the overall goodness of its counterparts, so we invite you to read the above-mentioned reports for more details. But suffice it to say that it impresses with a nicely padded and trimmed interior (with orange accents in this case), a nice selection of available features (including a 180-degree rearview camera with the ability to project its image in the rearview mirror, Qi wireless charging, rain-sensing wipers with de-icer, heated and ventilated front seats, a heated steering wheel, rear obstacle detection with automatic braking, Wi-Fi hotspot, and a power liftgate), competitive cargo room, and fine on-road dynamics.

Our timer clocked the Adventure at 8.18 seconds 0-60 — a good performance, if not quite up to the 7.5-second time of its Hybrid sibling.

To that last point, the ride was absorbent over Chicagoland’s pockmarked streets, and we averaged 8.18 seconds in the 0-60 dash — quite good for the class — while netting an impressive 31.9 mpg in 70-percent highway driving. But we also noticed that while transmission kickdowns were prompt when the throttle was stabbed at speed, there was often some power surging as the vehicle accelerated.

The Adventure includes some nifty orange interior accents, has a easy-to-use 8-inch touchscreen, and comes with console buttons for Sport, Snow, Mud & Sand, and Rock & Dirt. It also has a Brake Hold function, which holds on the brakes during long stops so you don’t have to keep the brake pedal depressed.

Some other nits noticed were that while infotainment controls were easy to decipher and use, the touchscreen was a bit of a reach, and the climate controls used repetitive-step pushbuttons for mode and fan speed rather than more-convenient rotary knobs — though that’s the way many other makes are now doing it as well. Also, taller/larger drivers may be a bit cramped behind the wheel, and while the cargo area is of good size and the rear seat backs fold level with the cargo floor, there’s virtually no underfloor storage space. But those are countered by good interior storage space and such niceties as vents and USB ports for rear-seat passengers.

There’s a good amount of cargo space even with the rear seat backs up, more with them down, and they fold level with the cargo floor. There are handy bins in the sidewalls along with 12-volt and 120-volt AC (household current) power outlets, but there’s no useful storage space under the floor.

With its lineup of gas, Hybrid, and Adventure models, Toyota is pretty much covering all the compact-crossover bases from economy and performance (both merits of the Hybrid) to luxury and off-road prowess. That and the fact all versions rate highly in most areas make them strong contenders for anyone shopping the popular compact-crossover class, with the Adventure adding some unique bonus points.

Adventure looks the off-road part, and includes some features that give it more capability in that regard. That and its higher towing capability make it a useful addition to the already-capable RAV4 lineup.