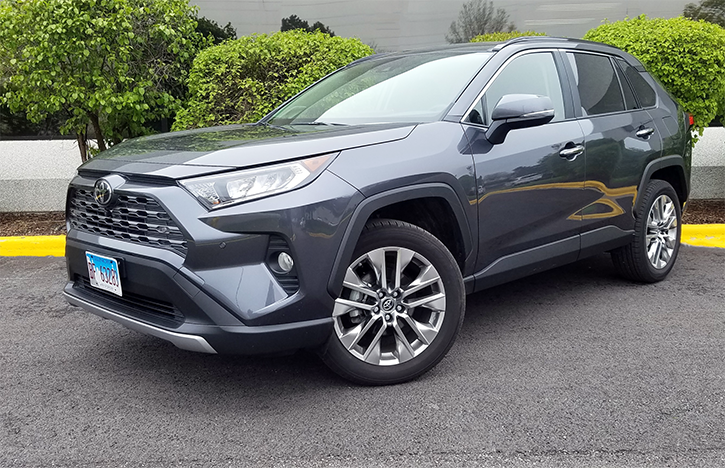 The not so good: Disappointing front-seat space for tall passengers; engine is a bit noisy when accelerating; non-linear transmission feel

Compact-crossover shoppers are ravenous for the RAV4, having made Toyota’s small sport-utility the best seller in the hotly contested class through 2018. Will that level of interest hold up? For 2019, there’s a new fifth-generation RAV4 with updated powertrains, a newly available torque-vectoring all-wheel-drive system, additional technology features, and more rugged looks than before. 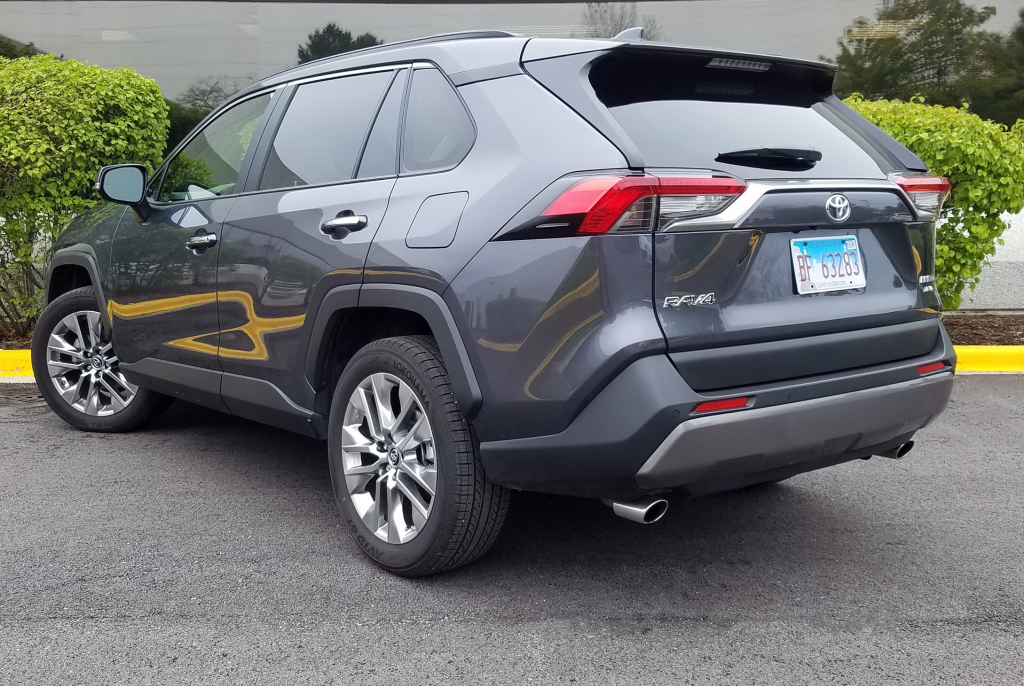 Low-profile roof rails, keyless entry and starting, and a power liftgate are standard equipment on Limited models. The optional Advanced Technology Packages adds upgrades such as a foot-activated height-adjustable power liftgate, smart-key access on all four doors and the liftgate, and a 360-degree camera system with perimeter scan.

There are five gas-engine models, four of which come with a choice of front- or all-wheel drive, and four AWD gas/electric hybrids. At the top of either class sits the Limited, and Consumer Guide got to try out a gas all-wheeler.

Even at the same trim level there are some intriguing choices for shoppers to weigh. At 219 total horsepower, the RAV4 Hybrid is stronger than its all-petrol partner, and—per colleague Rick Cotta, who sampled both at the media preview—it’s quicker, too. The Hybrid’s 1750-pound towing capacity outpulls most gas-engine RAVs by 250 pounds (though the outdoorsy Adventure model is rated at 3500 pounds), and, of course, the Hybrid delivers much better gas mileage, especially in city driving. A Hybrid Limited starts at $1150 more than a gas-engine Limited with all-wheel drive that sells for $35,945 with delivery, but that difference is not much more than the cost of some of the option groups that were added to CG’s test vehicle.

The RAV4’s control layout is logical, with decent–if not class-leading–cabin trimmings. Headroom for tall occupants is disappointing, especially in the front row, but legroom is OK in both the front and rear seats.

The 2019 RAV4 is packing all of this into the “Toyota New Global Architecture” platform. The wheelbase expands by 1.2 inches (even as overall length shrinks very slightly) and ground clearance rises by 2.3 inches.

Zeroing in on the model we tested, the 2.5-liter 4-cylinder gas engine now makes 203 horsepower, a gain of 27 from the prior year, and the automatic transmission is an 8-speed with two more cogs than before. Power output is acceptable for most driving situations—it’s just how it gets there that might be a problem. To this driver, shifts seemed oddly timed and out of sync with power demands. Engine noise builds with revs. There is a “Sport” mode, but its selection didn’t make the test truck feel appreciably quicker. More satisfying was its modest fuel use. A run of 210 miles, with 60 percent city-style driving, returned 27.4 mpg. The EPA estimates economy of 25 mpg in city driving, 33 on the highway, and 28 combined.

The RAV4’s small-item storage space isn’t outstanding, but there are some clever touches, like slim “trays” on both sides of the dashboard (this one is nestled to the left of the steering wheel). A control panel left of the shifter on the center console houses the parking brake and auto-brake-hold, hill-descent-control, drive-mode, and AWD controls.

Ride is firm but not harsh. Steering is responsive, and cornering lean is fairly well controlled for the class. The RAV4 brakes well, too. Gas all-wheel jobs incorporate dynamic torque vectoring that can send up to 50 percent of torque to the rear wheels and further apportion power to the wheel that needs it most. It also can disconnect the rear driveline at times when front-wheel drive is sufficient to drive the vehicle.

As with the previous-generation model, the 2019 RAV4 packs a good amount of cargo space within its sensible exterior dimensions, and the cargo load floor is laudably low. There’s 37.5 cubic feet of cargo volume behind the rear seats, and an impressive 69.8 cubic feet with the rear seats folded.

While the tested truck was optioned up to a bottom-line price of $39,034 (two $1000-plus Limited-specific packages and an audio upgrade had a lot to do with that), the Limited starts out with a good complement of equipment. Standard features include 19-inch chrome-finish alloy wheels, LED headlights, fog lights, power moonroof, and power liftgate. Seats are clad in SofTex leatherette and heated in front. Audio is an 8-speaker affair with navigation, an 8-inch touchscreen, satellite radio, and Apple CarPlay compatibility; climate control is dual zone. Safety gets a boost from Toyota Safety Sense 2.0, a suite with pre-collision warning and pedestrian detection, dynamic cruise control, lane-departure alert with steering assist, lane-tracing assist, automatic headlight high-beam control, and road-sign recognition. 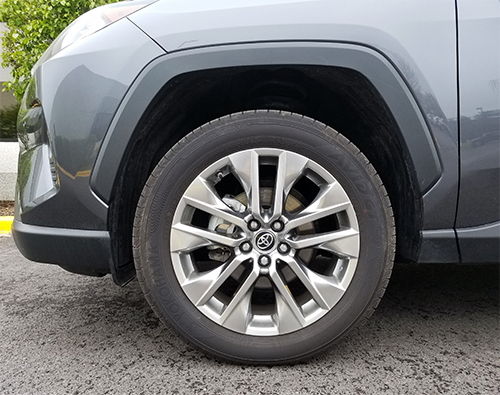 There is soft-to-the-touch material on the dash and all four doors, tops included. Most driving and ancillary controls are easy to read and reach, with the possible exception of the vehicle-info display in the instrument cluster, which is kind of small and dim. It’s easy to program audio presets on the screen—physical tuning knobs speed up the process. Climate controls use handy rotary knobs for temperature settings but “busier” repetitive-push buttons for fan speed and mode.

Elsewhere in the cabin, personal storage is so-so. There’s a pretty-good-sized glove box, and an exposed tray runs across the dash (even with a little continuation to the left of the instrument cluster), but console-box volume is small. Front-door pockets are short, even if they incorporate bottle holders, and rear doors have room just for bottle holders. There’s a single storage pouch, affixed to the back of the front passenger seat. Exposed cup holders are found in the console and pull-down rear armrest.

Passenger headroom seems better in the rear seats than in the front row—even under the extended extra-cost panoramic sunroof. Good legroom is available in either row, however. A low, flat floor hump makes it possible for three youngsters—maybe even three slight-of-build adults—to fit across the rear seat. Driver vision is best to the front and worst at the rear corners.

Good cargo space is found on flat load floor—and there’s a little bit of “informal” hidden space below around the spare tire. Liftover is at a comfortable level, even with raised ride height. However, a subwoofer that’s part of the JBL audio option occupies space in the left-side cargo wall, a location that might cut off some loading possibilities. The rear 60/40 seats fold almost flat, and without interruption from the cargo bay, for lots more capacity. The optional hands-free tailgate worked quickly, when most such devices pay this reviewer no heed.

It may not do everything uniformly well, but the new Toyota RAV4 is excellent in so many facets that it should continue standing out from the teeming compact-crossover crowd. 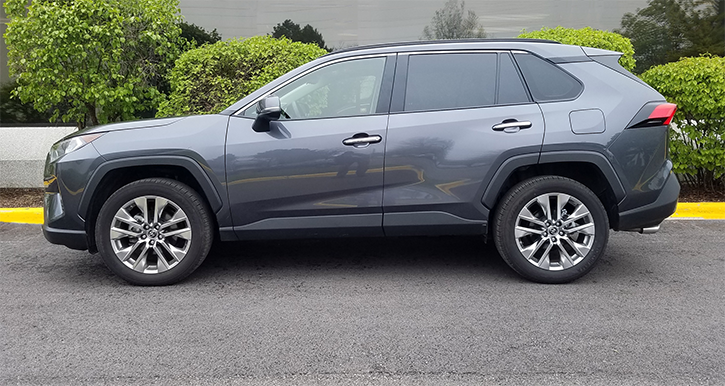 The redesigned-for-2019 Toyota RAV4 brings rugged new styling, more horsepower, and a long list of newly available technology features. Front-seat passenger room is a bit diminished compared to the outgoing model, but overall the new RAV4 improves on its predecessor while maintaining its versatile “jack-of-all-trades” appeal.