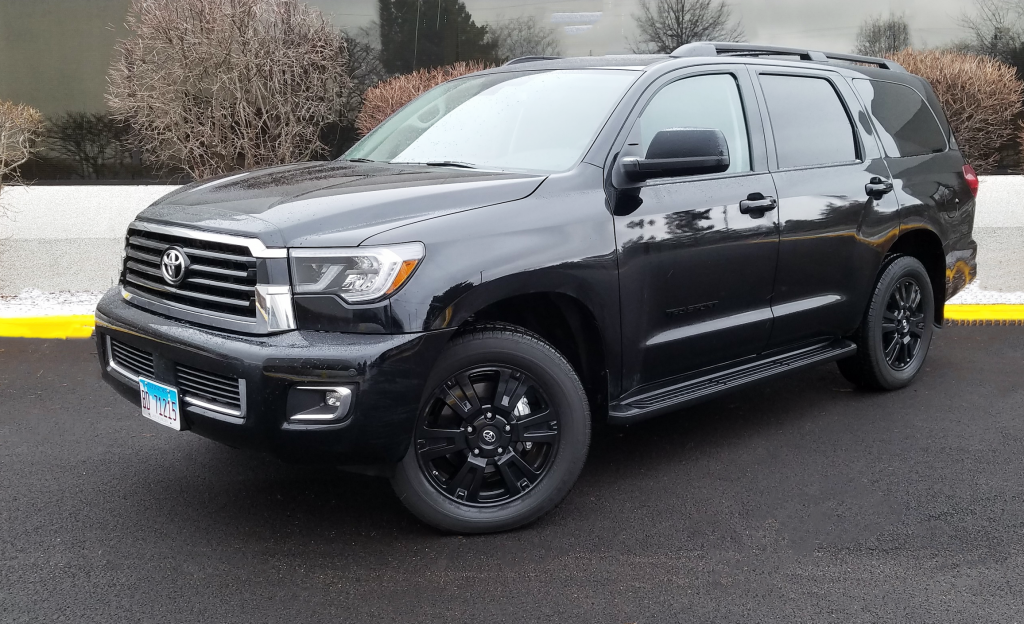 The great: Good ride quality and better handling than might be expected of a vehicle this size

The not so good: Dismal fuel economy, Sequoia’s basic design is the oldest in the large SUV class, and it shows

Apparently, the folks at Toyota who are responsible for the Sequoia sport-utility vehicle tuckered themselves out in 2018. The essential design of this body-on-frame large SUV dates to 2008, and in some years—2019 being one of them—no significant change touches the vehicle line. That was virtually assured when the ’18 model picked up standard Toyota Safety Sense P driving aids, blind-spot and rear cross-traffic alerts, a freshened front fascia and dashboard, and a new TRD Sport model. 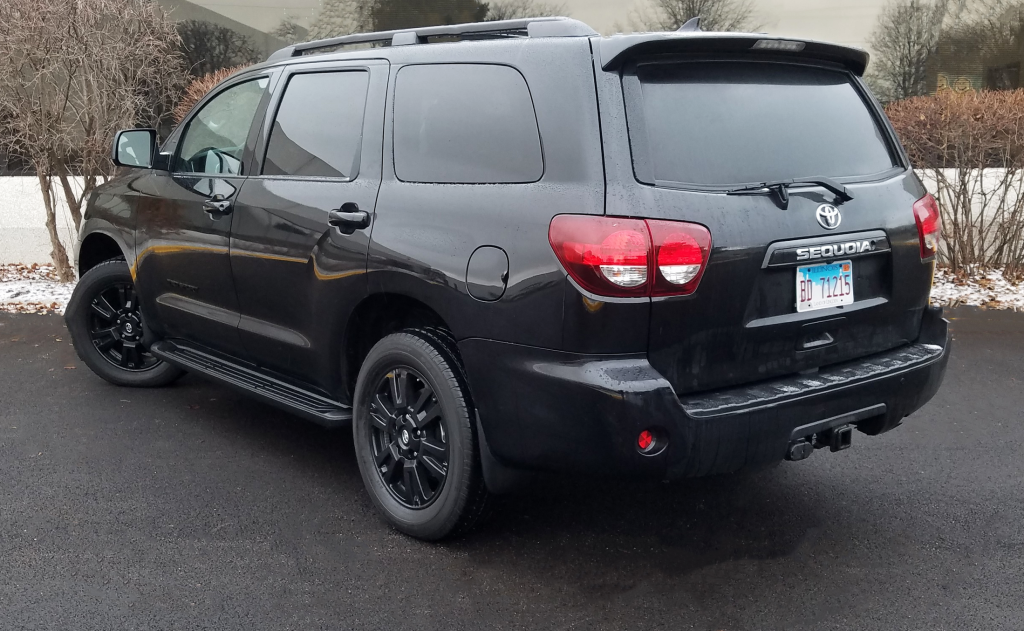 Blackout trim gives the Sequoia TRD Sport a sinister look. Roof-rack rails, a sunroof, running boards, a rear spoiler, and a tow-hitch receiver are included on the standard-equipment list.

Time to take a knee.

In this quiet period Consumer Guide has the chance to try out the newcomer to the Sequoia catalog. The TRD Sport slots between the entry-level SR5 and the second-from-the-top Limited. It features some distinctive trim items inside and out, but also adds different suspension tuning.

Dashboard design is one of the main areas the Sequoia shows its age; the infotainment system doesn’t offer many of the features that are commonplace on newer systems. There is a narrow covered storage bin on the center console.

You’ll know a 2019 Toyota Sequoia TRD Sport when you see one coming because it rolls on 20-inch black alloy wheels, is fronted by a gloss-black grille with a chrome surround, and has satin-black “TRD Sport” badges on the front doors. (CG’s tester came painted Midnight Black Metallic for an overall look that might be best described as “collapsed star.”) Inside are TRD-branded doorsill plates, shift knob, and embroidered floor mats. 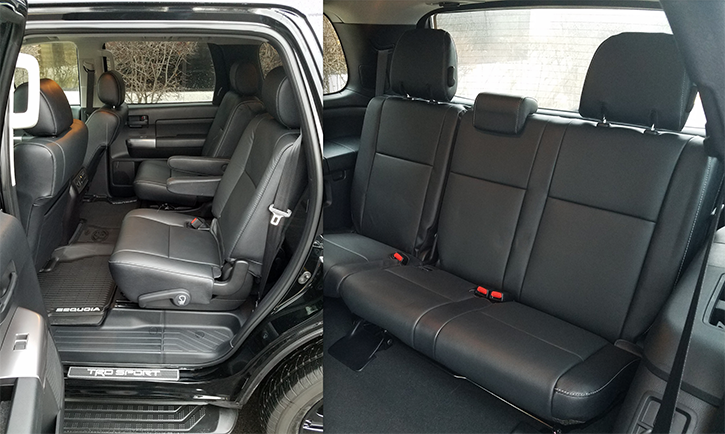 There’s ample room in the second row and enough space in the third row for average-sized adults. Included in the $3810 TRD Sport Premium package’s numerous upgrades are leather-trimmed seats with contrast stitching.

The Toyota Racing Development parts you’re more likely to feel than see are the tuned Bilstein shock absorbers and front and rear antisway bars. Even with them some degree of lean remains in cornering—how could it not from something this size and height?—but the big Sequoia Sport is not especially bouncy on its fully independent suspension. It steers relatively quickly and feels a little nimbler in traffic than a 122-inch-wheelbase vehicle that weighs almost 6000 pounds might be expected to be. Indeed, this driver was surprised to be able to flick the tail a little while making a sharp left turn from a standing start in 2-wheel mode on dry pavement.

The Sequoia isn’t as big as some of its large SUV rivals, but it still offers plenty of space–18.9 cubic feet behind the third-row seats, 66.6 cu. ft. with the third row folded, and 120 cu. ft. with both the second- and third rows folded.

All Sequoias have the same powerteam, a 5.7-liter V8 and 6-speed automatic transmission. The engine produces 381 horsepower at 5600 rpm and 401 lb-ft of torque at 3600 revs. It is strong and responsive. Prompt transmission kickdown, even at highway speeds, makes for effortless passing. Four-wheel-drive models like the tested vehicle include a Torsen limited-slip center differential with locking feature. An easy-to-use dial on the dash switches from 2-wheel drive to 4-wheel High or Low. The Sequoia has a towing capacity of 7100 pounds as a 4×4, or 7400 pounds as a rear-wheel driver. 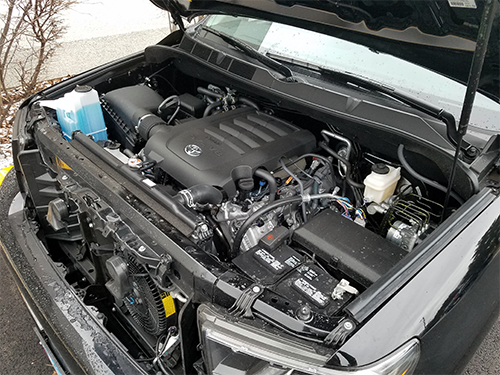 Naturally, bulk and a big engine do not a gas-sipper make. EPA estimates for the 4WD Sequoia are just 13 mpg in city driving, 17 on the highway, and 14 combined. This reviewer saw 13.8 mpg from his turn in the truck, a 218-mile stint that included 50 percent city-type driving.

In the miles between visits to the gas station passengers will find themselves stretching out in very roomy first and second rows, and a third row that is eminently acceptable for a couple of adults or three kids. Standard seating in the TRD Sport is for seven, with individual captain’s chairs in the middle row. Seats in the first two rows are comfortable and supportive, with wide cushions. Access to the rear row is possible with a minimum of squirming either behind or between the adjustable-track captain’s chairs. Standard running boards are a boon to entry and exit, and driver vision through large windows is good in practically any direction.

A lot of the interior surfaces in the Sport seem soft to the touch but they’re not padded save for door centers, armrests, and the broad console lid. The tilt/telescoping steering wheel is leather trimmed, and the test vehicle had optional leather upholstery in place of the standard cloth.

The Sequoia cabin is well fixed for personal storage. There are twin glove boxes; the massive console box with an adjustable tray for small items; a long, narrow, and deep covered cubby to the right of the shifter; large door pockets with twin bottle holders; pouches on the backs of the front seats; and a mix of exposed and covered bins in the third-row sidewalls. Front passengers get open cup holders in the console, middle-row occupants have cup holders that pop out of the back of the console at floor level (where they are a bit of a reach), and rear-seat denizens will find receptacles inset in the sidewalls. 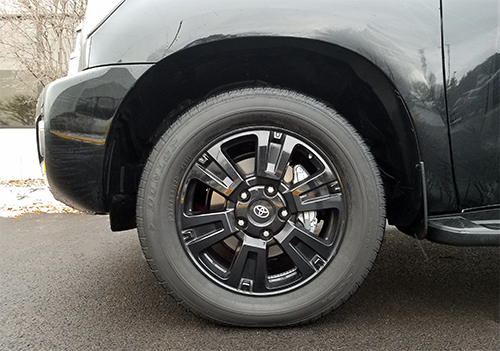 With all seats in use, there’s limited rear cargo space, though the bumper-height floor panel can be removed to open a wide section that’s several inches deep—or be left in place for hidden storage. Load capacity improves a lot when the 60/40 rear seats are retracted. Really large cargo can be carried when the second-row seats are lowered. Hinged panels on the backs of the captain’s chairs swing down to bridge a gap that exists between the second-row seats and the rest of the cargo floor.

The Sequoia isn’t the biggest of the large SUVs, and it certainly isn’t the most up to date. However, it’s still quite capable and it displays different personalities across its four trim levels. That’s what this established Toyota rests on.

The aged Sequoia still has Toyota’s reputation for build quality and surprisingly decent road manners going for it, but its fuel economy is subpar even by large SUV class standards, and it lacks the latest infotainment/connectivity features.