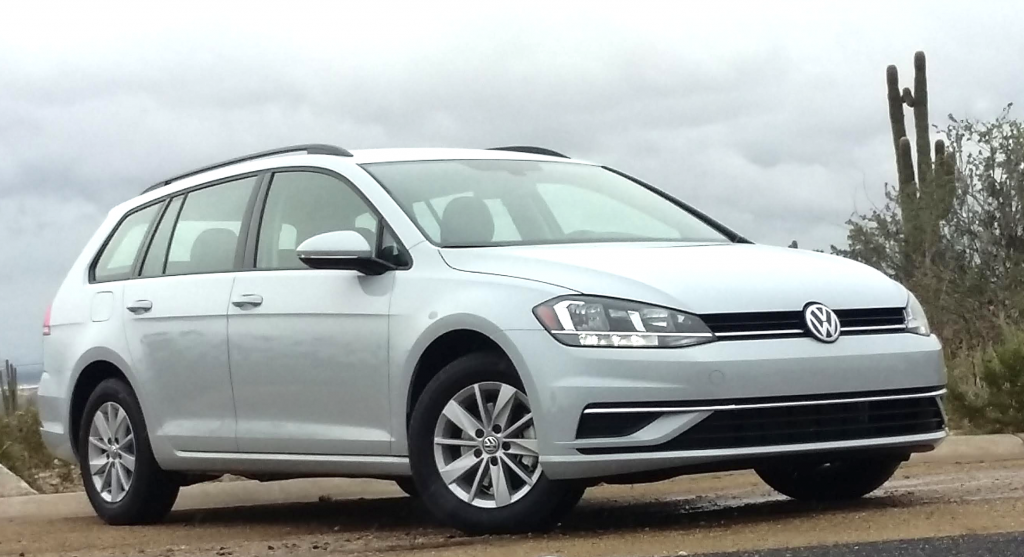 The not so good: Low-rpm throttle response

If you don’t want to follow the crossover crowd but admire those vehicles’ cargo capacity, Volkswagen’s Golf SportWagen may be the car for you.

We’ve long been impressed with the SportWagen. It’s often found its way onto our Compact Car Best Buy list over the years, and has recently added an all-wheel-drive version that brings another favored crossover feature — with a SportWagen-based Alltrack model boasting a raised ride height that adds another.

Our tester was a rather odd bird — both as SportWagens go and for test cars in general. Not only was it equipped with the standard 6-speed manual transmission (the $1100 8-speed automatic being something most buyers choose), but it was a base S model with only one option: the bargain-priced Driver Assistance Package ($495) that includes forward collision warning and mitigation with pedestrian detection along with blind-spot and rear-cross-traffic alert — something everyone should get and arguably should be standard (and it is on the upper-line SE). 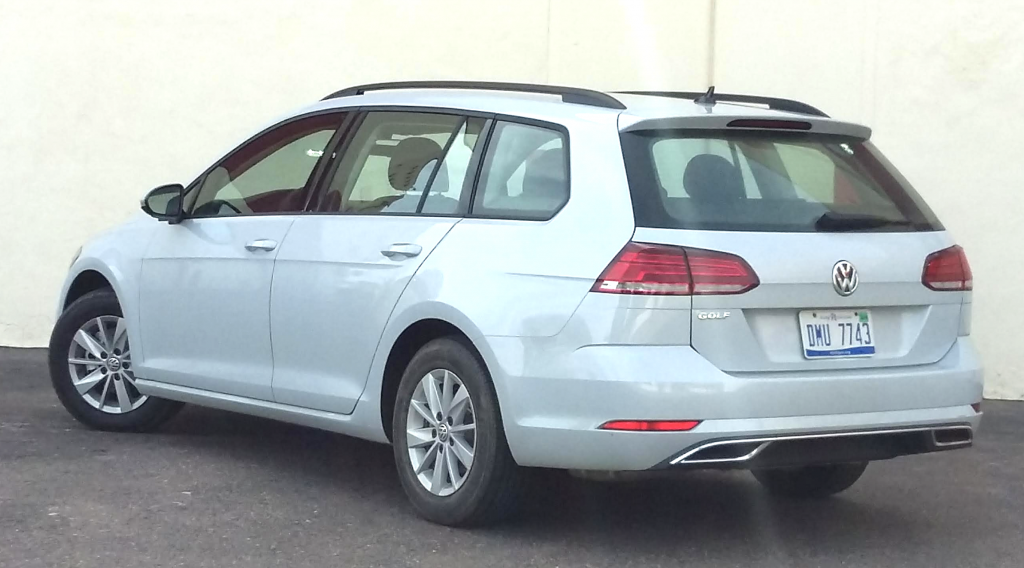 The SportWagen is one of the few station wagons on the market, deftly blending carlike ride, handling, and fuel-economy benefits with crossover-like cargo capacity. An all-wheel-drive version is also offered.

Front-drive versions of the SportWagen are now powered by a 147-horsepower 1.4-liter turbocharged engine, which replaces a turbo 1.8 for 2019; all-wheel-drive 4Motion models retain a 1.8 turbo with 168 horsepower, and are available with either the 6-speed manual or a 6-speed automatic. The SportWagen 4Motion is offered only in base S trim (the more-expensive Alltrack essentially taking over “top-line” duties) starting at $25,290 including destination.

Along with the smaller turbocharged engine for 2019, the standard 6-speed manual takes the place of a 5-speed. The combination accounts for a substantial 3-4 mpg increase in EPA fuel-economy estimates, now sitting at 29 city/37 highway/32 combined. That’s better than those of virtually any small crossover, making for a strong selling point. (Ratings for the 4Motion with 1.8 turbo are 6-7 mpg lower.) In support of these lofty ratings, we averaged an impressive 40.3 mpg in mostly highway driving, beating the EPA highway estimate. (It’s possible a fuel-filling error was involved here — sometimes the pump clicks off a little before the tank is “full” — but still ….)

One drawback to the smaller turbo engine is in low-rpm power delivery. If you dip into the throttle with the engine much below 2000 rpm in the higher gears, there’s just nothing for a couple of beats before boost builds and the car moves off. That can be quickened by downshifting the relatively smooth manual trans to a lower gear (the automatic does it much more quickly than you can, bringing a practical reason for ordering it), but it means you have to do a little more work than in most manual-transmission cars. Otherwise, power is adequate, but no more.

One area in which the SportWagen always excelled was in ride quality — both from a comfort and noise standpoint. That’s still a strength, even though this Sportwagen didn’t seem to exhibit quite the composure offered by earlier ones we’ve driven. Handling is also a notable plus, particularly if you compare it to that of a taller crossover.

Another SportWagen advantage — shared with most other Volkswagens — is its control layout. Both audio and climate controls are easy to decipher and use, something that’s too often not the case these days. Similarly impressive — and line-wide — is the interior material choice and general execution, both of which belie the car’s relatively low price.

Visibility is good all around, though the side pillars block some over-the-shoulder view. The center rear-seat headrest can be lowered to overlap the seat back to clear the view directly behind. A huge amount of headroom and legroom is offered up front, though if you take full advantage of the latter, legroom in the rear seat is significantly compromised. We managed to squeeze three adults in back, but shoulder room was too tight for long-trip comfort, and a large center floor hump made for meager center-seater foot space. Cabin storage space is quite good, highlighted by a large glovebox, covered forward console bin, handy flip-down left-side dash bin, and large map pockets in the doors.

From left: Rear seat backs can be released from both inside (latch on seat back) and the cargo compartment (flipper on side wall), a handy and unusual attribute. The cargo area is long and wide, and the rear seat back includes a ski pass-through — another nicety. There’s some added storage space beneath the cargo floor, which can be set at raised and lowered heights. The pull-down handle on the inside of the hatch lid allows you to grip it “underhanded,” which minimizes the possibility of wrist injury when closing.

But the SportWagen’s real raison d’etre — and strongest selling point — is its cargo space. At 66.5 cu. ft. with the rear seat folded, the SportWagen’s capacity falls between that of most subcompact and compact crossovers, trading cargo-area height for length. There’s also some  “unofficial” under-floor storage space in the center of the spare tire, and the rear seat backs — which can be released both from inside and with levers in the cargo compartment — offer a large ski pass-through. The SportWagen also comes standard with roof rails, which is not always the case with crossovers.

Yet another selling point of the SportWagen — and most other Volkswagens — is its warranty. At 6 years/72,000 miles bumper-to-bumper, it’s among the best in the business.

With customer preferences moving toward crossovers these days, cars are becoming almost obsolete — and in fact, many are being discontinued. We hope the SportWagen won’t be among them, as it combines carlike dynamics and fuel economy with crossover capabilities in an attractive package that offers a lot for the money.

As the only station wagon available in the compact-car class, the SportWagen offers a unique combination of crossover space and carlike dynamics, and delivers it in an impressively classy package.