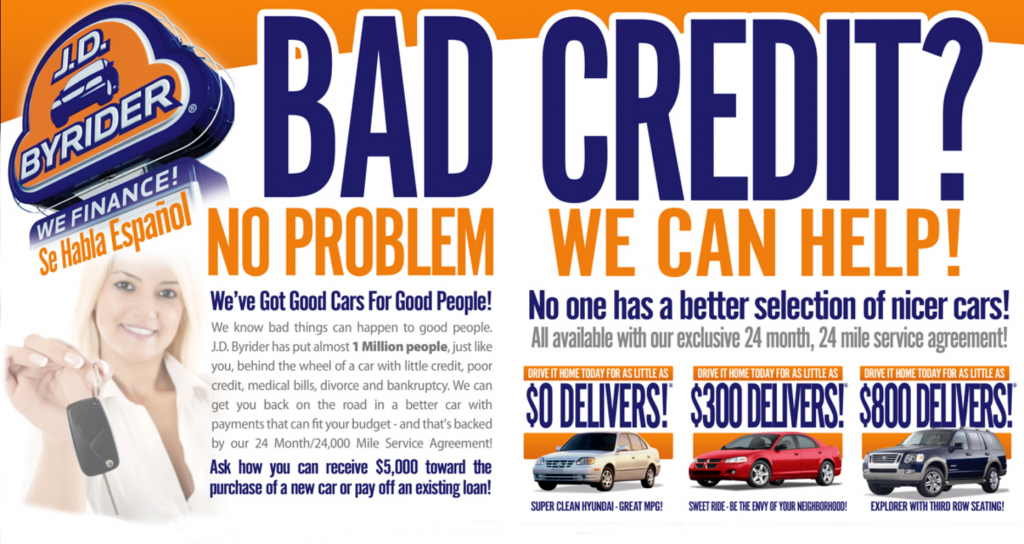 If you’re gainfully employed, living within your means, and pretty good about paying your bills, there’s a good chance you don’t need to know too much about your FICO credit score. For most consumers, the only time the score matters is when it comes time to finance a house, car, or other large purchase–and if you’ve been responsible, you’ll qualify for a decent interest rate.

However, for many consumers, a decent credit rating is what stands between them and the purchase of a new or used vehicle. Unfortunately, the FICO system–the most commonly used credit-rating system in the U.S.–does not take into account hardship, sickness, or the loss of a breadwinner—it considers only hard metrics, such as income, payment history, and debt load. 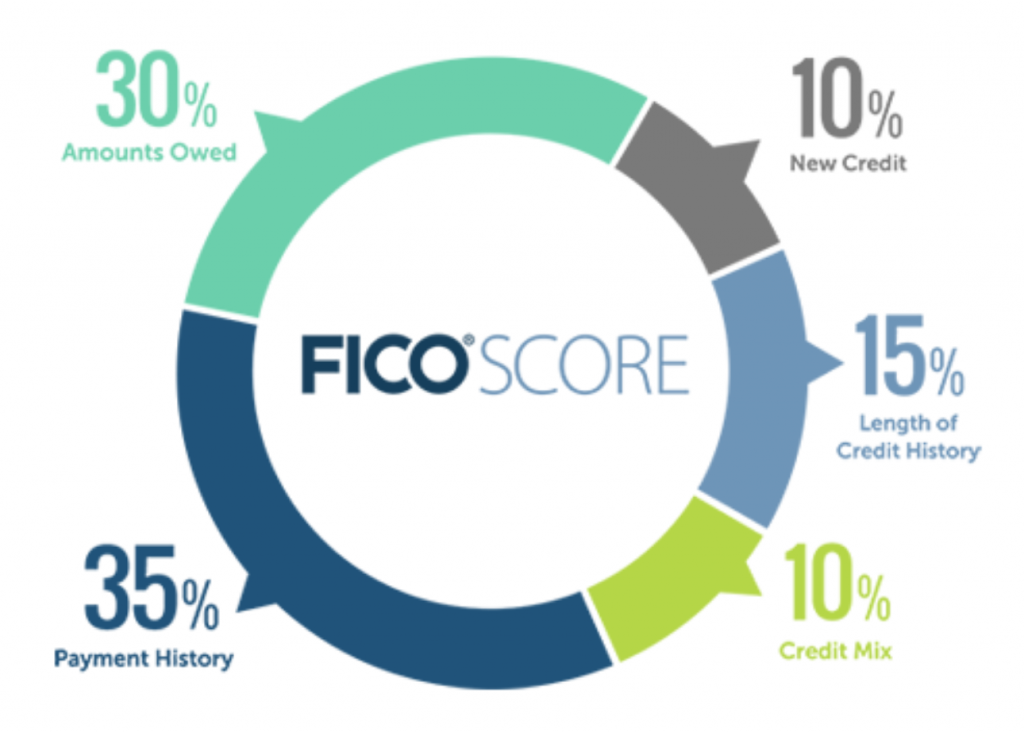 A lot goes into calculating a FICO score. The ramifications of a poor score may include paying higher interest rates and having difficulty securing financing for large purchases.

Scores on the FICO scale range between 300 and 850, with ratings above 661 considered “prime.” Roughly 65 percent of American consumers enjoy credit ratings in the prime range, and as a result, they typically qualify for the lowest interest rates.

Scores between 601 and 660 are considered “nonprime.” Nonprime consumers generally pay a higher interest rate than those with a prime FICO score, but generally have little difficulty securing a loan.

Next are “subprime” FICO scores. Consumers with a subprime rating will pay interest rates considerably higher than prime-rated shoppers, and may have some difficulty in getting a loan. Note that there are lending organizations that specialize in lending to subprime borrowers, as the high interest rates on subprime loans mean substantial profits for companies that can mitigate the potential risk. FICO scores between 501 and 600 are considered subprime. Roughly 15 percent of American consumers fall into this group. It’s worth noting that many–though not all–new-car dealerships will work with consumers with FICO scores in this range.

Consumers with FICO scores below 500 are generally unable to secure traditional financing, leaving them in a bind when it comes time to buy a vehicle. Alternative financing options for such shoppers include borrowing money from friends and family, or turning to a “buy here, pay here” dealership.

Traditionally, these dealerships are independent used-car lots, often with a limited inventory of vehicles. Many of these stores cater to specific ethic groups, and hire sales staff fluent in the language of their target audience. Click here to check out some buy-here, pay-here (BHPH) stores that are geared toward Hispanic consumers.

The BHPH plan is simple enough: consumers are financed by the store itself, and make payments, sometimes in person, on a weekly or bi-weekly basis. The hook is that these stores only finance vehicles from their inventory, and the selection can be limited. Also, the vehicles themselves are often overpriced, and the interest rates on the loans are usually substantially higher than the rates applied to even subprime loans.

Founded in 1989, JD Byrider is a national franchise dealership chain dealing exclusively in BHPH sales, and retails an average of 5000 vehicles monthly.

Unlike most BHPH stores, JD Byrider locations present well, sporting a clean, standardized franchise look and some level of advertising support. In a nutshell, JD Byrider dealerships look less seedy than many BHPH establishments. Additionally, JD Byrider stores are supported by a corporate website that allows consumers to review inventory by store location.

To help keep payments in the company’s target range of $150-$200 every two weeks, most of the vehicles in a JD Byrider store’s inventory are priced around $10,000. Per the corporate website, each vehicle JD Byrider sells has been subject to a 92-point inspection, with all necessary repairs performed before the sale.

To keep its inventory reasonably fresh-looking while maintaining retail prices near the target selling price, something has to give—and that thing is mileage. The average vehicle listed in JD Byrider’s inventory has comfortably more than 100,000 miles on the odometer, with many cars going as high as 130,000.

A limited warranty is mentioned on several pages of the JD Byrider website, but no specifics are given–only an asterisk informing consumers that the warranty varies by selling location. Not surprisingly, extra-cost extended warranties are available.

At this point, you may be thinking that none of this sounds all that bad, as long as people with bad credit are getting into vehicles they could not otherwise purchase. Here’s the catch: As with a typical BHPH dealership, the JD Byrider inventory is often overpriced, and the interest rates charged are exorbitant.

Let’s look at three cars as offered by JD Byrider, CarMax, and as valued by Kelley Blue Book:

First, we observe that CarMax is no longer the bargain retailer it once was (which is a story for another day). More importantly, JD Byrider prices run roughly 10 percent higher than the CarMax prices–for cars that, in at least two cases, had accrued more mileage.

But the price of the vehicle is less of an issue than the interest rate on the Byrider loan. Let’s look at the Hyundai Sonata from the example above: 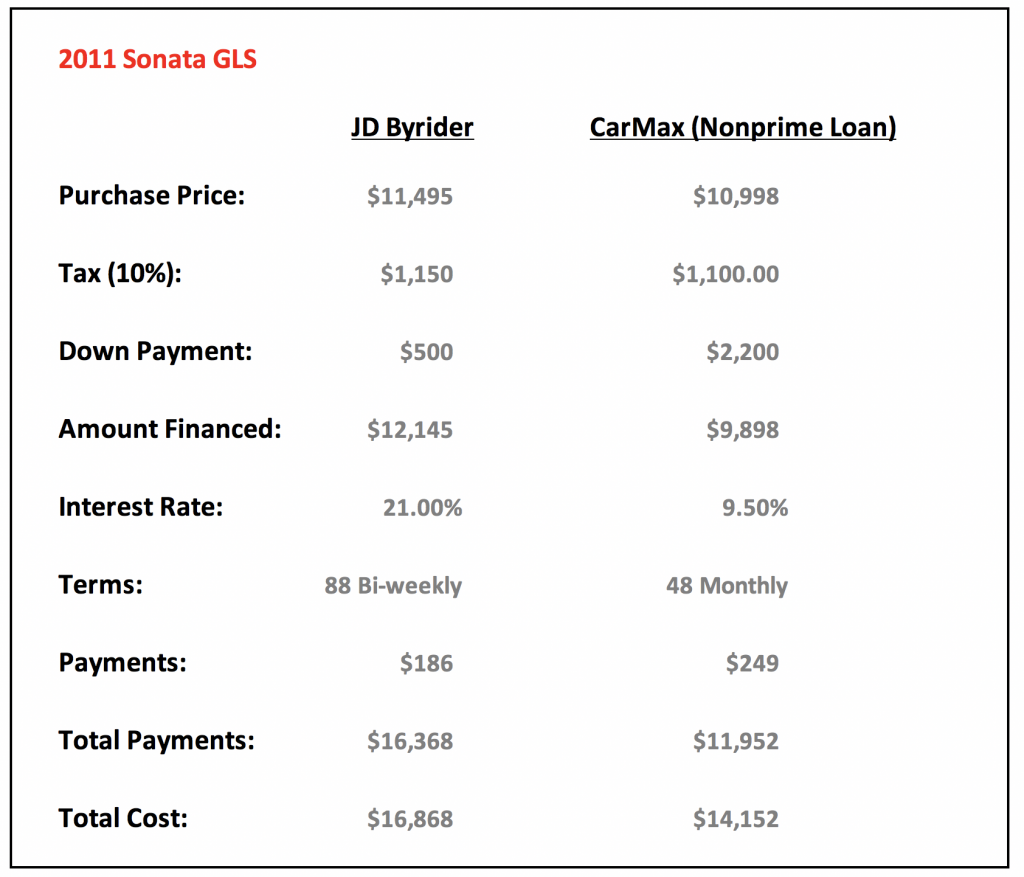 When total finance costs are taken into account, the same basic car costs roughly 20 percent more to purchase at JD Byrider than at CarMax.

The terms of the JD Byrider loan above come from the example loan cited in small print at several locations on the corporate website. The CarMax example includes the used-car rate for nonprime loans the day this article posted as seen on Bankrate.com.

The most notable takeaway from the above chart is the 20-percent cost difference between buying the same basic vehicle at JD Byrider and at CarMax. Perhaps more troubling is that at more than $16,000, the JD Byrider Sonata would cost almost double the Kelley Blue Book estimated retail value of the car.

The fact is, consumers in credit-score trouble may not have any alternative but to purchase a car from a BHPH establishment. For those shoppers, JD Byrider may offer greater credibility than any of the small, unaffiliated establishments offering similar payment plans. It’s also worth noting that even though the dealerships are “pay here” establishments, JD Byrider customers can make their payments digitally and need not visit the store.

Should you buy a car from JD Byrider? Consider the following:

If you’re dealing with credit distress, you’ve likely heard this advice already: You’re off better waiting until your credit is repaired, or until you’ve saved enough money to purchase a vehicle with cash, than to finance using a BHPH program. We’re not suggesting that organizations like JD Byrider are operating outside ethical boundaries, but they are set up to profit from consumers in no-win situations, and maybe that’s the sort of business you want to avoid.

Additionally, JD Byrider reviews found on Youtube are overwhelming negative and are a must-watch for anyone considering doing business with the company or any of its franchise locations.