According to a company-supplied history, Toyota built its first car in the United States on October 7, 1986. It was a white Corolla FX16 made at the New United Motor Manufacturing, Inc. plant in Fremont, California. “NUMMI” was Toyota’s joint-venture operation with General Motors that in those days also produced Corolla-based four- and five-door Chevrolet Novas. 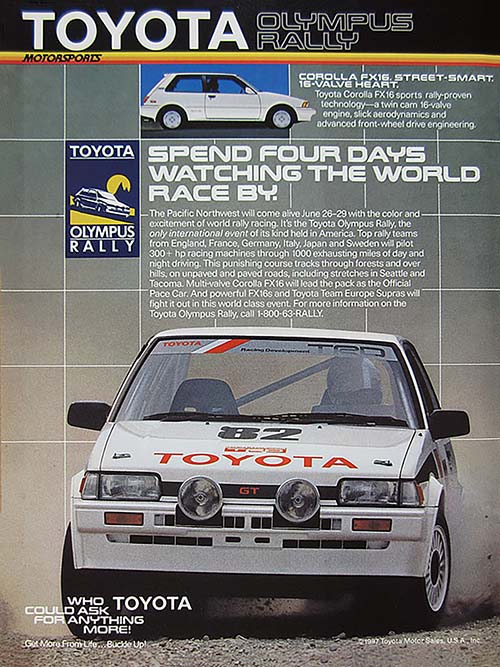 The FX16 was based on Toyota’s fifth-generation Corolla, and used its front-wheel-drive chassis. There was a base model, but the sportier GT-S trim is our focus. It had four-wheel-independent suspension, power rack-and-pinion steering, and disc brakes all around. It ran on a 95.7-inch wheelbase, was 160 inches long, and had a curb weight of 2366 pounds.

The FX16 was a three-door hatchback. Styling was pretty typical for the era with simple lines and large glass area. The not-particularly distinctive face used smooth composite headlamps that straddled a thin strip of grille, and the bumper was broken up by a series of six openings that were set low and added a sense of width. The result recalled the then-current Corolla sedan, but wasn’t a carbon copy. The sides were broken up with a few horizontal creases, and some small ribbed louvers near the base of the C-pillars added a bit of interest. The back end was planed off in a Gremlinesque manner, with the hatch panel and taillights wrapping around the edges.

Toyota’s 1.6-liter dohc four-cylinder “4A-GE” engine was under the hood. It also powered the contemporary rear-drive Corolla GT-S (the well-remembered AE86 model) and MR2. Here the fuel-injected 16-valve engine was good for 108 bhp at a lofty 6600 rpm, and 96 pound-feet of torque at 4800—though horsepower was up to 110 in 1988. A five-speed manual transmission was standard, with an electronically controlled four-speed automatic as an option. The slushbox came with a button that the driver could use to select “Normal” or “Power” shift points.

The interior featured cloth upholstery, a leather-wrapped shifter knob, and tilt steering wheel. The GT-S could be ordered with the Sport Seat Package that added a racy-looking seven-way adjustable driver’s bucket. The rear seat folded in a 50-50 split to increase cargo room.

Car and Driver’s September 1986 review of a preproduction FX16 GT-S was generally positive. Handling, ride comfort, and a fun-to-drive personality were pluses, but C/D wished that the engine produced more torque at low RPM, and opined that brake balance and modulation needed improvement. It reported a 0-60-mph time of 9.8 seconds—slightly quicker than the contemporary Volkswagen GTI, a car that would be at the top of many enthusiasts’ lists.