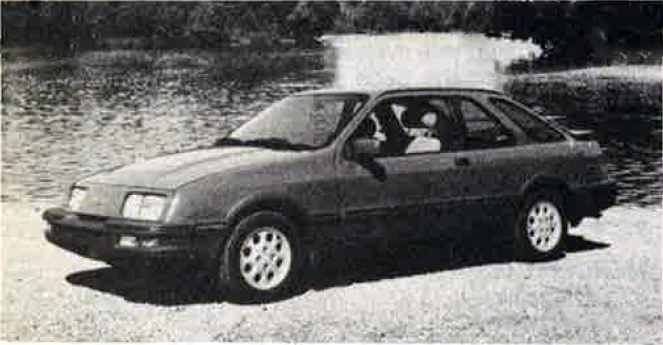 Merkur, if you recall the brand, was in many ways a marketing complement to General Motors’s Geo experiment.

Products bearing the Geo badge were sold through select Chevrolet dealers between 1989 and 1997. Sold only by a handful of Mercury outlets, Merkur lasted from 1985 through 1989.

The Merkur brand was active for just five model years.

Merkur’s first and arguably most interesting car offering was the XR4Ti. A federalized version of the German-market Ford Sierra, the XR4Ti swapped the European model’s 2.9-liter V6 for a U.S.-sourced Ford turbocharged 4-cylinder engine.

Displacing 2.3-liters, the motor was similar to the engine found in the contemporary Thunderbird Turbo Coupe and Mustang SVO. As noted in the review below, the ending was good for a healthy 175 horsepower when coupled to the standard 5-speed-manual transmission, but just 145 when saddled with the optional 3-speed automatic.

The XR4Ti proved popular with the automotive media, including Consumer Guide. In fact, our ancestors here at “the Guide” awarded the Merkur coupe Best Buy status in its first model year.

Critics enjoyed a love/hate relationship with the XR4ti, with few being able to reconcile the grille-less front end with the complicated “twin-spoke” rear pillar and biplane rear spoiler.

Customers would be the final arbiters of the XR4Ti’s appeal, and the buying public largely voted thumbs down. Sales of the coupe for model-year 1985 (which began in spring of 1984) came to almost 28,000 units, but fell off a cliff after that.

The XR4Ti was the only Merkur model until the Scorpio sedan landed for 1988, and that landing came with a thud. Based on the European-market Ford Scorpio, the Merkur approximated the size and shape of the Mercury Sable in the same showroom, which may have been part of the problem.

Any Merkur is a rare sight today, though this author sees the occasional Scorpio in traffic, but hasn’t seen an XR4Ti in years.

You can read Consumer Guide’s entire original review of the 1986 Merkur XR4Ti below. If you have any memories of the XR4Ti or the Merkur brand, please share them with us. The place to leave comments is down below. 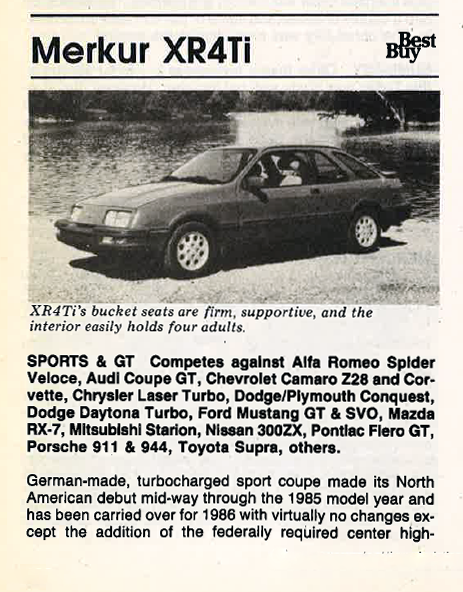 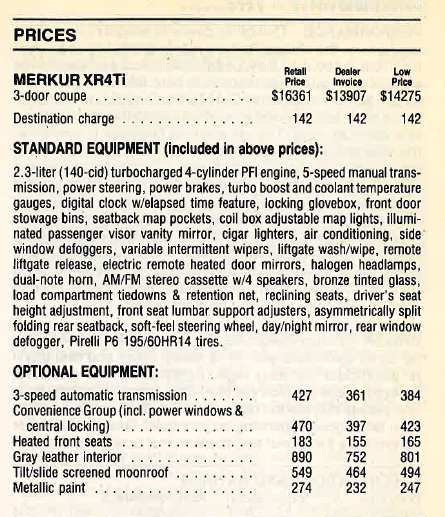