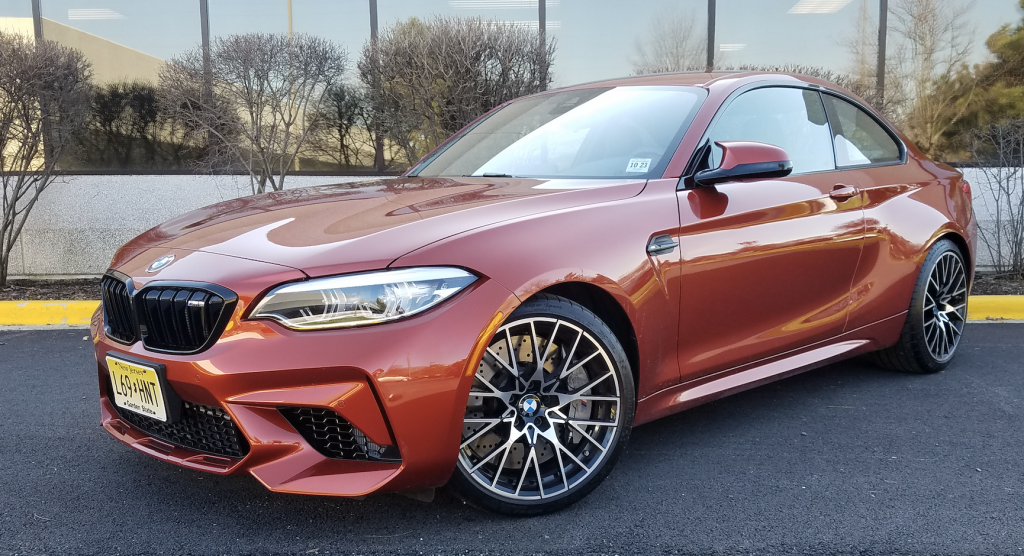 The not so good: Ride quality, price reflects the overall goodness

BMW built its reputation on performance, and our test M2 backed that up. Yet for a (very) sporty coupe, it also proved surprisingly livable and even … dare I say … practical. 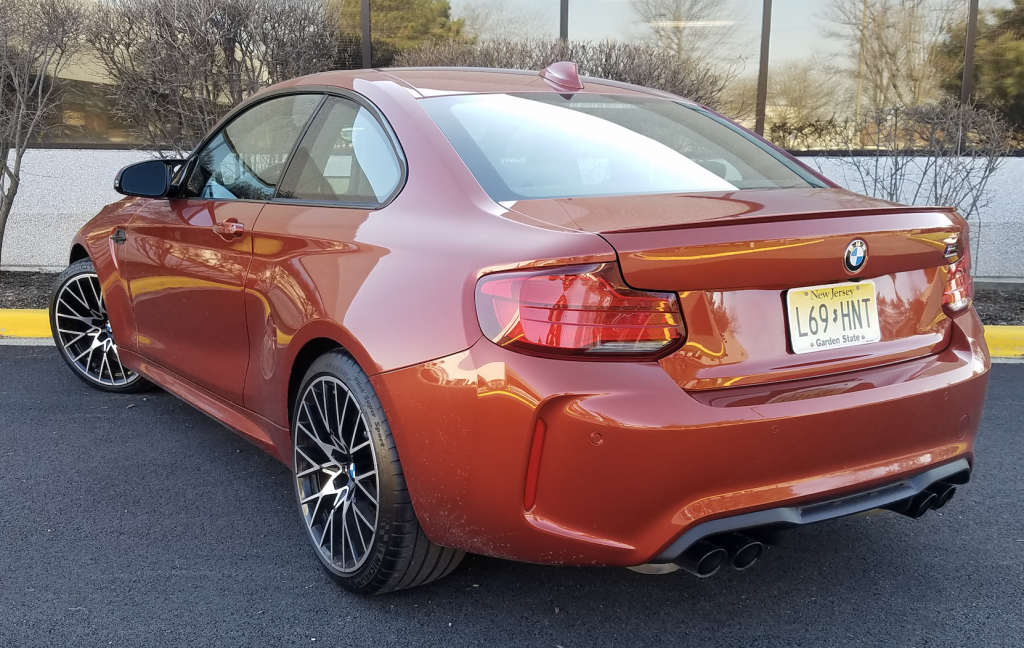 Even the name — BMW M2 — is tidy, as is the vehicle itself. With 405 turbocharged horses driving 3450 lbs, the M2 boasts a very performance-oriented power-to-weight ratio of 8.5 lbs/hp.

Since performance (and economy, for that matter) benefits from lighter weight, a car that’s no bigger and heavier than you need is going to give you the best bang for your buck. And the M2 is tidy, to be sure. Its  176-inch overall length contributes to a curb weight of just 3450 lbs, something that allows its twin-turbo, 405-hp inline six to feel more like a very potent V8. Nail the gas from a stop, and the M2 moves out briskly, then suddenly quickens its pace as the turbos spool up. The dual-clutch 7-speed automatic transmission (a $2900 option to the standard 6-speed manual) rips through shifts as the engine sings its joyous straight-six song, and kicks down fairly quickly when stabbing the throttle prompts a downshift from speed. BMW claims a 4.2-second 0-60 time, which we find entirely believable. But as opposed to some V8 pony cars, this is not a burnout king; turning off the traction control and nailing the gas didn’t produce any wheelspin theatrics (the M2 rightfully snubbing such adolescent behavior), and with only the rear wheels driving the car, it probably puts as much power to the ground as traction would allow.

As might be expected, handling is a strength. Small size and light weight help here, too, with the M2 feeling very nimble and eager in corners. Also as might be expected, this comes at the expense of ride quality, the usual tradeoff when stiff springs and rubber-band tires meet any kind of road irregularity. But the surprise was that smaller bumps – usually a problem for low-profile tires to absorb – were more heard than felt, though larger ones indeed were … felt. Note, however, that this was in Comfort mode, though Sport and even Sport + weren’t brutally stiff. Even in normal urban areas, we’d call the ride “acceptable” for a sport coupe; only in places like Chicago would it likely cause the occasional grimace, though we’d advise against driving one in Detroit without a wheel insurance policy — and a mouth guard.

For a sporty/performance car, the M2 Competition is quite accommodating inside. Not only is there decent space for four adults, but storage space — though limited — is better than the norm.

Otherwise, the M2 Competition provides a nice “daily driver” environment. While BMW took it on the chin after introducing its infamous iDrive control layout more than 15 years ago, a couple of things have combined since to make it more acceptable. Not only has the design logic been upgraded over the years to become much easier to decipher and use, but the concept itself has since been widely adopted by other makes, many in a notably worse fashion. The infotainment system includes a volume knob and eight programmable buttons on the dash, with other adjustments being made through a console control knob with some being redundant on the touchscreen. Climate controls were very easy to reach and use. So overall, the M2’s control layout actually ranks as “pretty good” now.

Also “pretty good” are the M2’s accommodations. Visibility borders on excellent all around, though the sunvisors unfortunately don’t extend when swung to the sides, leaving lots of the windows uncovered.

M2 cues are subtle, to be sure, but are there if you know where to look. The shift lever (far right) has no Park position; you just turn the engine off when in Drive or Reverse … kind of a stumper if you don’t know the secret.

Our tester had the $2900 M Driver’s Package, which included sport seats with adjustable lumbar and side support along with heat and memory that were – to me, at least – very comfortable. Most touch surfaces are thinly padded with what at least looked like leather, and some others boasted sporty carbon-fiber panels.

As common on performance vehicles, cabin storage was marginal, though better here than in some competitors. A small glovebox is joined by a small console box with USB port, two covered cupholders next to another USB and a 12-volt outlet, a shallow front console tray, and large map pockets in the doors.

Even tall drivers should find plenty of stretch-out room, though using legroom to its fullest makes the rear seat uninhabitable to humans; behind a normal-size driver, however, it managed to hold my 5’9 frame in relative comfort, though that’s about the max. Getting back there was a little easier than in many coupes thanks to a power-sliding front seat and a relatively tall, wide opening, but like most other coupes, the seat only holds two passengers.

Trunk space and versatility are pretty good for a sporty coupe. The cargo area is wide at the rear, non-intrusive strut-type trunklid hinges don’t dip into the load area, and rear seat backs fold level with the cargo floor.

The cargo area is a highlight. Besides being wide at the rear and decently sized, the strut-type trunklid hinges don’t intrude on the cargo area, and the rear seat backs fold level with the cargo floor — both being unusual and appreciated features — with the only demerit being that the floor isn’t completely flat through its width.

Certainly there are V8 pony cars that could match the M2 in a straight line and possibly on a road course, but few carry anything close to the BMW’s overall esteem. The company’s M-Series vehicles are the stuff of legend, and this smallest, lightest, and least expensive of the breed does nothing to tarnish that image.

The M2 looks every bit the performance sport coupe it is. While it can’t match some V8 pony cars on a performance-per-dollar basis, it makes up for that with overall polish and legendary street cred.