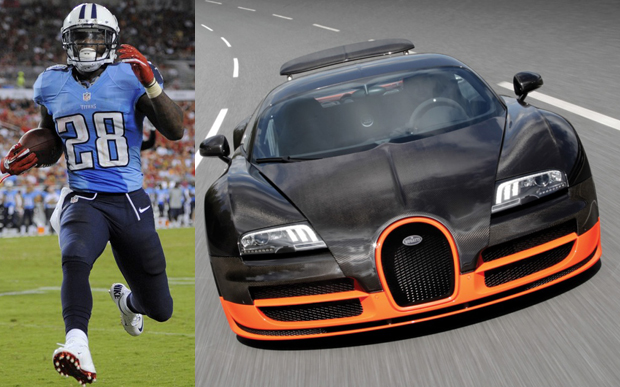 With another football weekend upon us, we thought it would be fun to showcase the best in each category: the speediest NFL player and the fastest car on the road; the strongest pro lineman and the most powerful vehicle you can buy. You get the idea.

So start your engines, and hut, hut, hike!

Blazing Speed
When Sports Illustrated asked more than 300 NFL players to pick the fastest player in the league, Chris Johnson placed first—as he often does. The Tennessee Titans running back, who was clocked in the 40-yard dash in an otherworldly 4.24 seconds, set an NFL record with 2,509 yards from scrimmage in 2009. Johnson, who will make $8 million this year, can afford to buy the world’s fastest car: the 1200-horsepower 8-liter 16-cylinder Bugatti Veyron Super Sport. The $2.4 million supercar outclasses all competitors with a top speed of 268 mph and a 0-60 time of 2.4 seconds.

Massive Size
Officially listed at 6-foot-8, 354 pounds, offensive tackle Bryant McKinnie was cut by the Vikings in 2011 after tipping the scales at close to 400! The Baltimore Ravens picked him up (though not literally; that would be impossible). McKinnie needs a big vehicle to get to practice, and the Chevrolet Suburban and its twin sibling, the GMC Yukon, fit the bill. The extended-wheelbase versions of these large SUVs each weigh 6,447 pounds, making them the heaviest non-pickups you can buy.

Enormous Strength
Legendary Cowboys guard Larry Allen retired after the 2007 season, but we can’t find an active NL player who can match the weight-room feats of this 11-time Pro Bowler. The 6-foot-3, 325-pounder could bench press over 700 pounds and squat more than 900! The Ford F-Series Super Duty truck is Larry Allen strong. Its Power Stroke diesel engine produces best-in-class 400 horsepower and 800 pound-feet of torque. When equipped with a fifth-wheel hitch, it can haul a class-best 24,500 pounds—i.e., 75 Larrys!

Amazing Versatility
Minnesota’s Percy Harvin can beat you in triplicate. Through Week 5 of the 2012 season, he led the NFL in kickoff return average (38.3 yards) and held a career rushing average of 6.6 yards per carry (98 lugs). Yet his primary position is wide receiver; he caught 87 passes in 2011. The Ford F-150 Raptor SVT is the Percy Harvin of the auto world. Powered by a 6.2-liter V8, the Raptor generates 411 horsepower and 434 pound-feet of torque. Beyond being fast and powerful, Raptor is built for extreme off-roading. Moreover, the 4-door SuperCrew model can accommodate Harvin and three of his teammates, and they can toss all of their gear into the Raptor’s bed.

Great Grip
As long as he can reach it, he can catch it. Arizona receiver Larry Fitzgerald, who has five seasons of 90-plus receptions, is universally lauded for having the stickiest hands in the NFL. The SRT Viper grabs pavement like Fitzgerald does pigskin. The Viper’s extraordinary width, low center of gravity, and steamroller tires provide uncanny grip and race-car response.

Keen Intelligence
With sheer brainpower, Broncos quarterback Peyton Manning brings defenders to their knees. He’s a master at reading the defense and making adjustments, both prior to the play (with audibles) and immediately after the snap. While Manning may laud the brains of the Buick Verano in TV commercials, the Mercedes-Benz E-Class may be the smartest car. With standard Attention Assist, this car alerts the driver if it notices signs of drowsiness. E-Class also has the latest edition of Pre-Safe, which detects conditions that suggest a collision or rollover. The system adjusts the front seat belts, front passenger seat, and windows to better prepare the occupants in the moments before a collision. Manning could use a system like that when he’s under a heavy rush!

Legendary Longevity
In a league in which the average career is less than seven years, Lions kicker Jason Hanson has tripled that mark. Born the same year that the Beatles broke up, Hanson has boomed field goals for the Lions for 21 seasons. Yet even Hanson can’t match the “legs” of Irv Gordon’s 1966 Volvo P1800. This car already holds the Guinness world record for accumulated mileage, and—like Hanson—it keeps going and going. In 2013, the retired Long Island schoolteacher hopes to record his 3 millionth mile. That’s the distance equivalent of 105 million 50-yard field goals!