What is Collector Car Appreciation Day?

Jim Hinde tutors a young motorist at the wheel of his 1961 Porsche 356.

So, how did you spend your Collector Car Appreciation Day?

That whole parade/fireworks/backyard-cookout thing being so Fourth of July, something completely different was called for. Hagerty Insurance Agency, LLC, a Michigan-based specialist in collector-car insurance, had an idea. It held one of its series of youth-oriented Driving Experiences on July 13, this year’s date for the third annual Appreciation Day. This time the program was held in Chicago, where budding area motorists—some of whom only recently earned their learner’s permits—were encouraged to get behind the wheels of a variety of vintage cars on a controlled course in a parking lot at U.S. Cellular Field, home of the Chicago White Sox.

The common thread running through all the cars on-site, which ranged in antiquity from a 1980 Triumph TR8 back to a 1930 Ford Model A, was that they were equipped with manual transmissions. The Driving Experience program targets young people 15 to 25 years old, who have come of driving age in an era of dwindling demand for manuals in new cars. Thus, most have never learned the skills necessary to exploit the potential of the selective sliding-gear transmission found in so many vintage vehicles—which might scare them away from ever wanting to own one. Finding new blood to cherish old things is always a concern for anyone with a vested interest in their continued desirability.

Though the program is open to any eligible young driver even if he or she has never so much as gripped a shifter knob, most of the seven participants on hand for the morning session in Chicago indicated they had some experience with three-pedal driving. (Another 15 attendees were expected in the afternoon.) After a brief demonstration of the workings of a clutch and an explanation of the course rules, the young people were encouraged to select a car and start driving under the tutelage of a Hagerty staffer or one of the firm’s clients who had volunteered to let their car be used.

Tall, stocky Nathan Balettie, 17, fit in the best he could behind the nonadjustable driver’s seat of the Model A. He listened carefully as Kyle Smith, a Hagerty summer intern who’s a student in the auto restoration program at McPherson College in Kansas, pointed out the location of the controls and the shift pattern. The blue Tudor—the same car that Hagerty employee Jonathan Klinger drove every day for a year concluding in October 2011—juddered away as Balettie tried to get used to its high clutch engagement while pressing the floor button that serves as an accelerator (not intuitive, as we discovered for ourselves). “The car is jumpy,” an encouraging Smith told him. “They’re built that way.” But after a couple laps, the teen driver was launching more smoothly and upshifting to second without a complaint from the nonsynchronized gearbox.

The young man’s take on this old-school driving? “It’s really different because of the age of the car, because of the way things are made. It’s an interesting experience, but it’s kind of tough to fit in one,” he said.

Driving—or owning—a manual-shift car isn’t solely a “guy thing.” Lauren Munday, 17, came up with her uncle, Kevin Munday, whose 2011 BMW M3 was in the mix to show participants how far shift-for-yourself driving has come over the years. She was surprised at the force needed to depress the brake pedal in Lizz Hoover’s 1966 Ford Mustang GT 2+2. “Oh, my goodness! And you drive with this?” she exclaimed upon learning that the brakes weren’t power-assisted. After improving her technique with the “four on the floor,” Munday was asked how she liked operating cars like it.

“It’s fun,” she said, stretching the last word with a big smile.

Hoover was a trusting soul, having volunteered use of her first collector car—“It’s the car I’ve always wanted”—which she’s owned for only six weeks. She admitted to being a little nervous witnessing the jerky starts, but ultimately she was happy to lend a hand. “I just think it [manual driving experience] is important to share,” she said.

The Chicago event was the fourth Driving Experience held so far, each in a different city. The next program in the series will be held in New York in September, and another will be run in Atlanta before the year is out. The program is free, but participants must have a valid driver’s license or learner’s permit. According to Eric DeBoer, a media planner for Hagerty, the program is promoted through social media, youth organizations, churches, and schools. Tabetha Salsbury, the company’s youth advocacy coordinator, said information on future events can also be found by clicking on “Operation Ignite!” at the company’s Website.

Eight vintage cars, including a ’63 Chevrolet Corvette Sting Ray (front) and a ’66 Ford Mustang (behind it), were on hand for participants to try. All had manual transmissions. 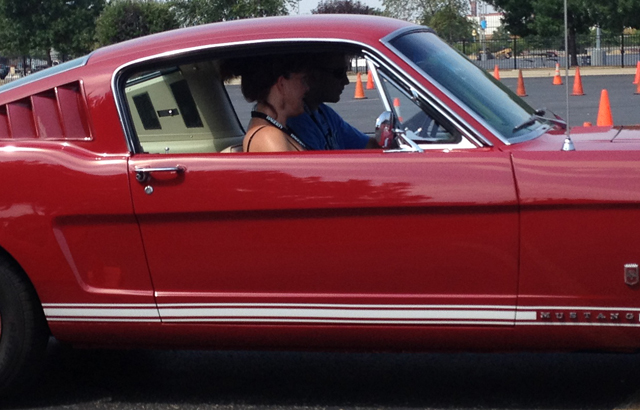 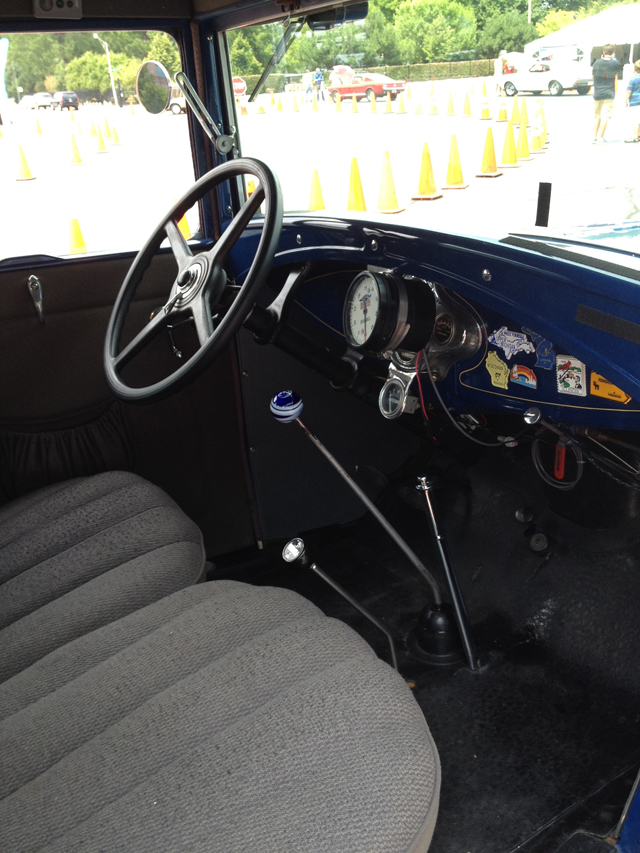 The close quarters of a 1930 Ford Model A provided today’s novice drivers with an eye-opening challenge. 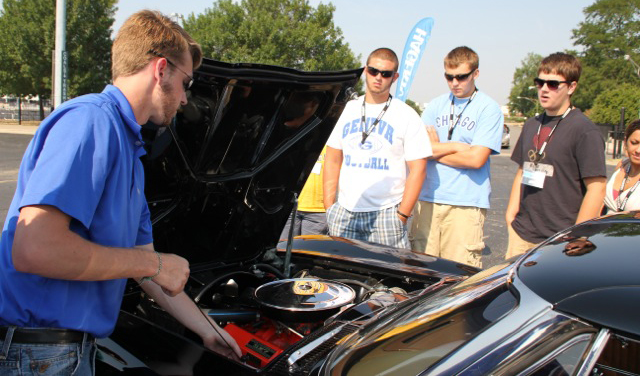