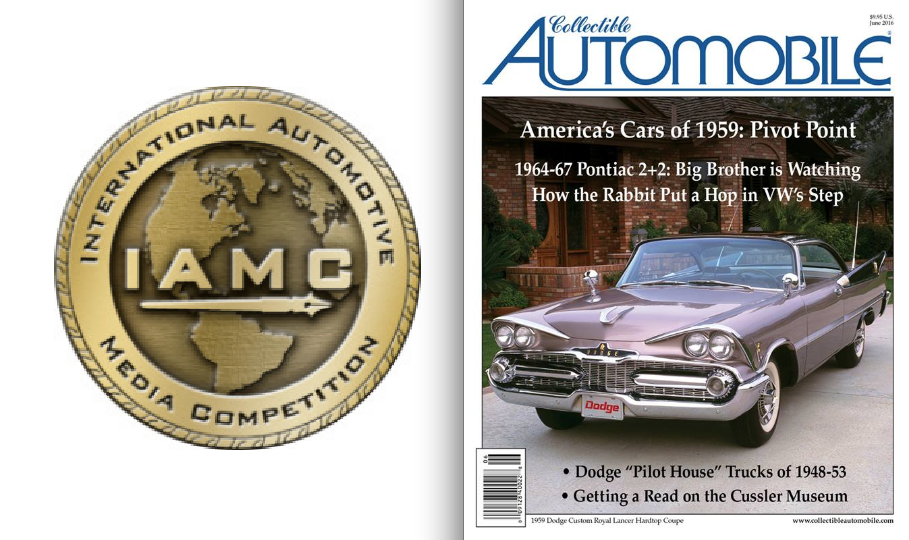 Both Collectible Automobile Magazine and the Consumer Guide® Daily Drive Blog were honored this year by the judges of the International Automotive Media Award Competition.

Road tests and road trips netted a trio of Consumer Guide® Automotive Daily Drive bloggers gold medals when the 26th International Automotive Media Awards (IAMA) were announced on July 30, and one of the three picked up an additional “best in class” award.

CG Managing Editor Rick Cotta not only collected a gold medallion in the Digital—Single Entry Road Test category for “First Spin: 2017 Honda Ridgeline” but was also accorded the competition’s “Best of Divisions” trophy for his preview of the new Honda pickup that was posted on May 9, 2016. From that same category, Senior Editor Damon Bell scored a gold award for “First Spin: 2017 Chrysler Pacifica,” his March 22, 2016, introduction to the latest Chrysler minivan. Another Pacifica story made Publisher Tom Appel a gold medalist. “American Travelogue: An Old-School Family Road Trip in a 21st-Century Minivan,” the account of a driving vacation from Chicago to Denver that was posted on August 9, 2016, won in Digital—Single Entry Travel.

Cotta’s medal was the second gold—and fifth of any type—that he has won. IAMAs are determined on an absolute 100-point scale where a minimum of 97 points from the judges wins gold. Entries from related categories that score at least 98 points are eligible to be judged against each other for further honors, which is how he became a Best of Divisions honoree for the first time. Appel has now won three golds out of five IAMA awards, while four-time medalist Bell picked up his first gold award. Overall, CG website articles and blog posts have accumulated 18 IAMAs—including seven golds—since 2009.

Keefe, who is a regular contributor to Collectible Automobile®, won his first IAMA medal for a piece that he wrote for the magazine. A total of nine CA articles have been so honored since 2009. The medallion given to the magazine was the 14th it has won from single-issue competition since 2002.

The awards were presented at a morning ceremony held in conjunction with the annual Concours d’Elegance of America at St. John’s in Plymouth, Michigan. The IAMAs recognize nominated works on automotive topics produced for print, broadcast, video, multimedia, and the Internet that were published or broadcast in the previous calendar year. The International Automotive Media Registry conducts the program.

Editor’s Note: John Biel is the Editor-in-Chief of Collectible Automobile®.