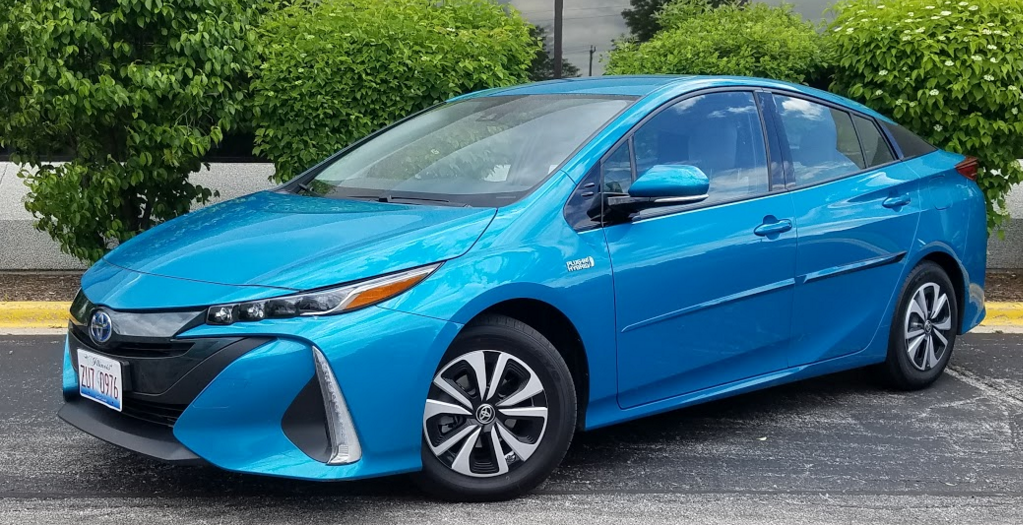 The not so good: Some switches and plugs awkwardly placed

Although the first-generation Toyota Prius Plug-in Hybrid didn’t fare all that well, this second-generation design — which arrived for 2017 — holds some real promise. 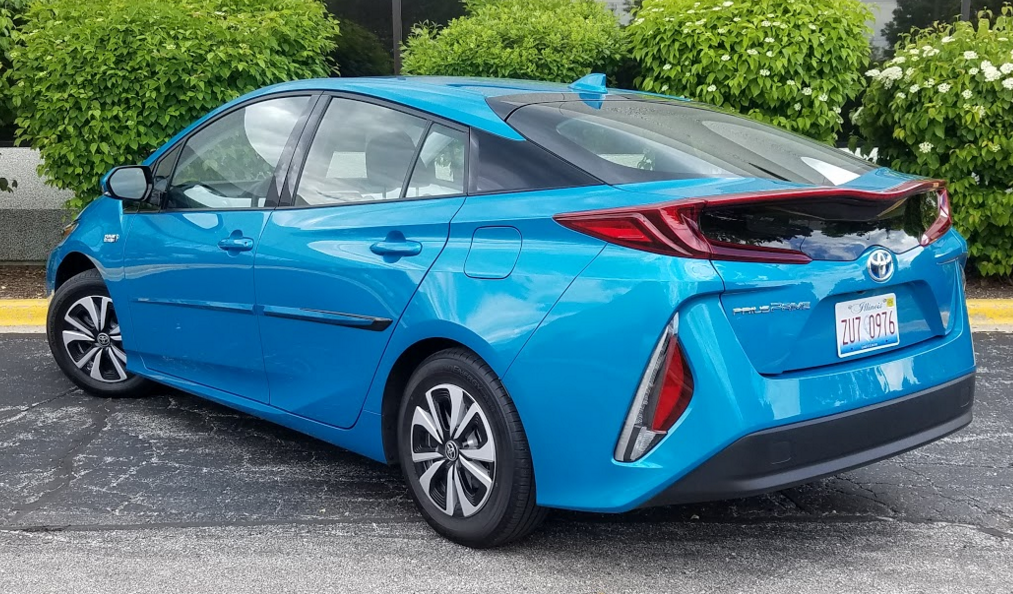 The plug-in Prime is about four inches longer than the regular Prius, all added behind the rear wheels — and most going to encase the car’s larger battery, which gives the Prime about 25 miles of all-electric range.

In virtually all their forms, plug-in hybrids are much like regular hybrids, except the battery is larger, allowing the vehicle to travel a ways on electric power alone before reverting to “normal” hybrid operation. And though you don’t need to, it’s most efficient to plug the car into a standard electric outlet to recharge that battery; otherwise, it’s recharged during normal driving, but that may not be enough to give it any appreciable “all electric” range.

Since Toyota’s name game can be confusing, let’s start with getting the models straight. The “regular” Toyota Prius — which has been around for ages and has long been the best-selling hybrid in the country — was joined a few years back by a plug-in version. As mentioned, the main claim to fame of most plug-in hybrids is that they can run for a ways on electric power alone. Trouble was (at least for that first Prius Plug-in), that “ways” was only about 11 miles, and for that a buyer sacrificed some space and quite a bit of money for the relatively short range on electric power alone.

But the current Prius plug-in — newly called the Prius Prime — offers a much more viable package. 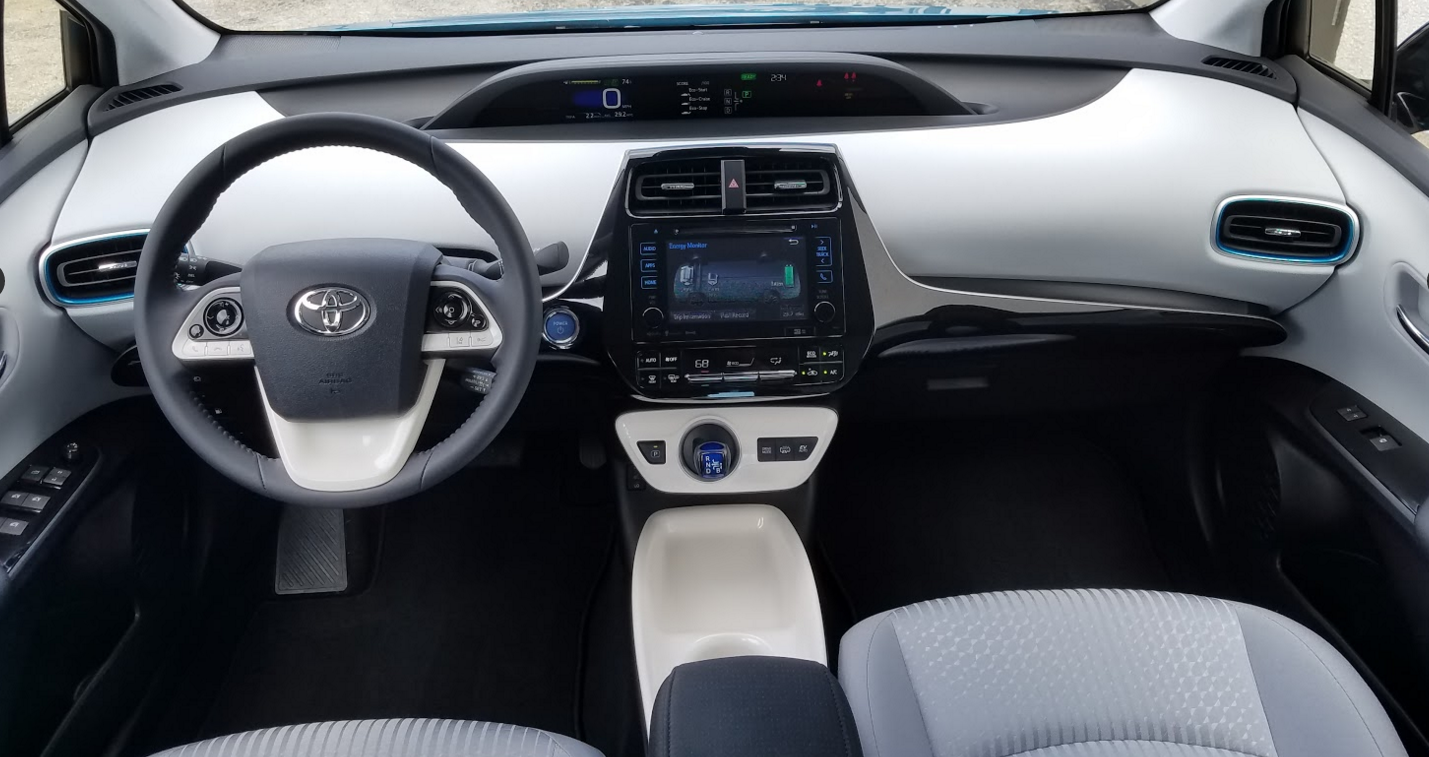 The base “Plus” version of the Prime has a fairly basic cabin, along with audio and climate controls that utilize an 8-inch touchscreen augmented with knobs and buttons; higher trim levels get an 11-inch touchscreen with far fewer “physical” adjustments.

First, estimated all-electric range has more than doubled, from 11 miles to 25. Also, if the buyer is eligible for the $4500 federal tax credit (based on the Prime’s 8.8 kilowatt-hour battery), the base Prius Prime Plus — which is what we tested — actually ends up costing about $2000 less than the base non-plug-in Prius. Furthermore, the Prime is more powerful than its Prius sibling, Toyota saying it’s about a second quicker from 0-60 mph.

Yet the picture isn’t entirely rosy. Although the Prius Prime is four inches longer than the standard Prius (to make room for the larger battery), it also has a raised cargo floor (for the same reason) that reduces the height of the cargo area and makes it more difficult to load bulky items. And while the rear seat backs still fold, they rest about 5 inches below the level of the cargo floor, though this might not be a real hindrance. There’s also some hidden storage beneath the raised floor, so that’s a plus.

We covered the “stats” of the Prius Prime in our First Spin report, so here are some elements that stood out after putting more than 1200 miles on a locally tested base model.

But on the good side … 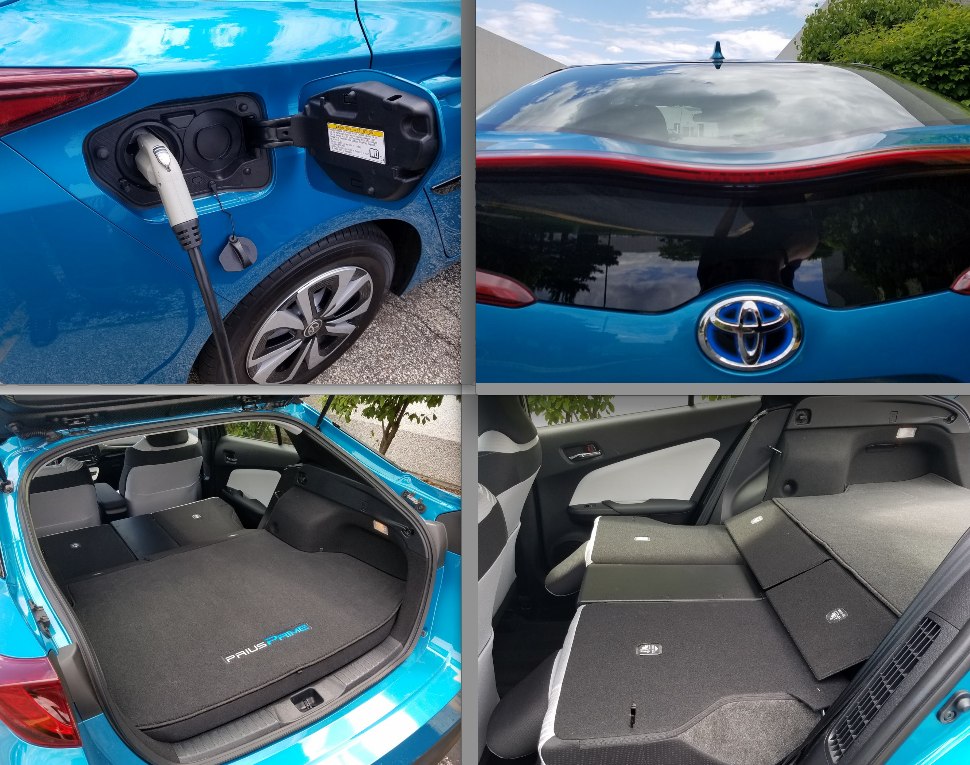 Some differences between the regular Prius and the Prius Prime (clockwise from top left): The Prime “plugs in” through a regular electric-car connector located on the right rear fender. Part of the styling differences include the Prime’s compound-curve rear window. Rear seat backs fold flat, but they don’t rest level with the raised cargo floor, which reduces available cargo-area height.

One more thing. Subtracting the $4500 federal tax credit from our test car’s $28,418 bottom line leaves a net price of $23,918. Seeing as even this base-model Prius Prime comes standard with such features as a navigation system, heated front seats and mirrors, keyless access and starting, and the Toyota Safety Sense suite of high-tech safety features (forward collision warning with pedestrian detection, lane-departure warning and mitigation, automatic high beams, and adaptive cruise control), it would be a compact-car bargain even if it didn’t offer exceptional hybrid fuel economy and electric-only drive capability.

And that’s long been our stance even for the regular Prius. So if you have a place to plug in the Prime — and particularly if your day-to-day commute is less than about 30 miles — this new plug-in version of the Prius makes for an exceptionally inviting package.

The Prius Prime is not just a great deal for hybrid fans; it’s also a fine car for anyone who appreciates terrific fuel economy and good passenger and cargo room in a well-equipped compact at a very reasonable price.