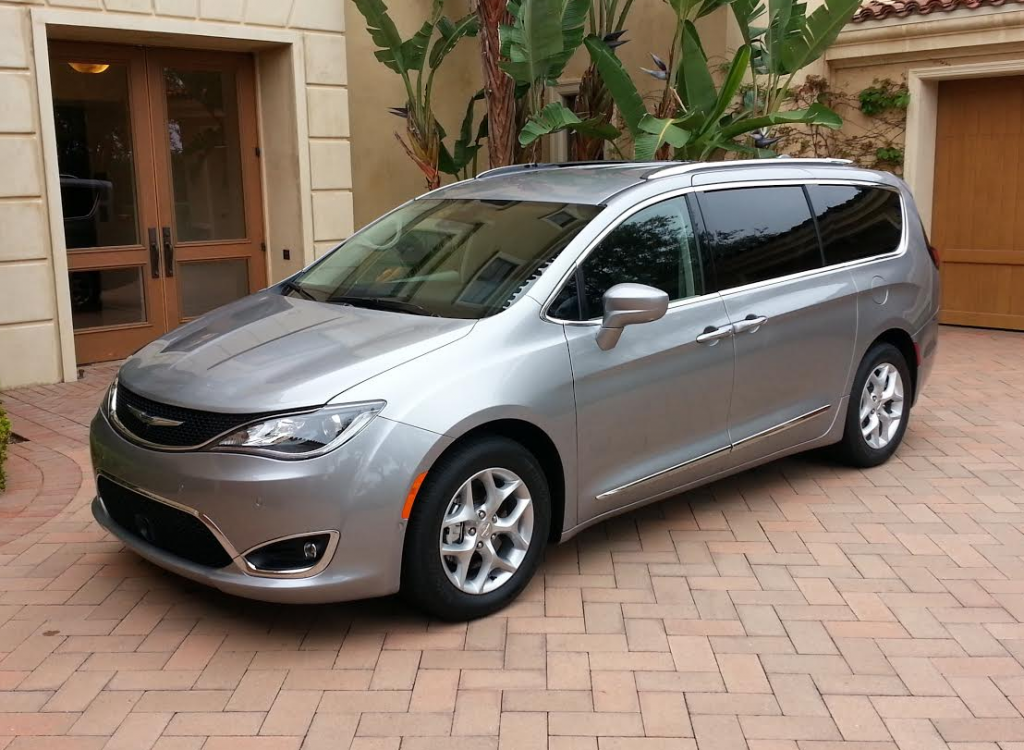 Just a few short months ago, Chrysler took the wraps off its long-anticipated all-new minivan at the 2016 North American International Auto Show… and revived a dormant name from its recent past in the process. Gone is the Town & Country moniker; Chrysler is calling its redesigned minivan Pacifica, a name last used on Chrysler’s not-very-popular midsize crossover SUV that was sold from 2004 to 2008.

Apparently, Fiat-Chrysler CEO Sergio Marchionne is aiming to narrow the gap between auto-show debuts and on-sale dates, because the Pacifica is already set to arrive in dealerships later this spring, and we just got back from our first drive of the newest minivan from the company that created the minivan. 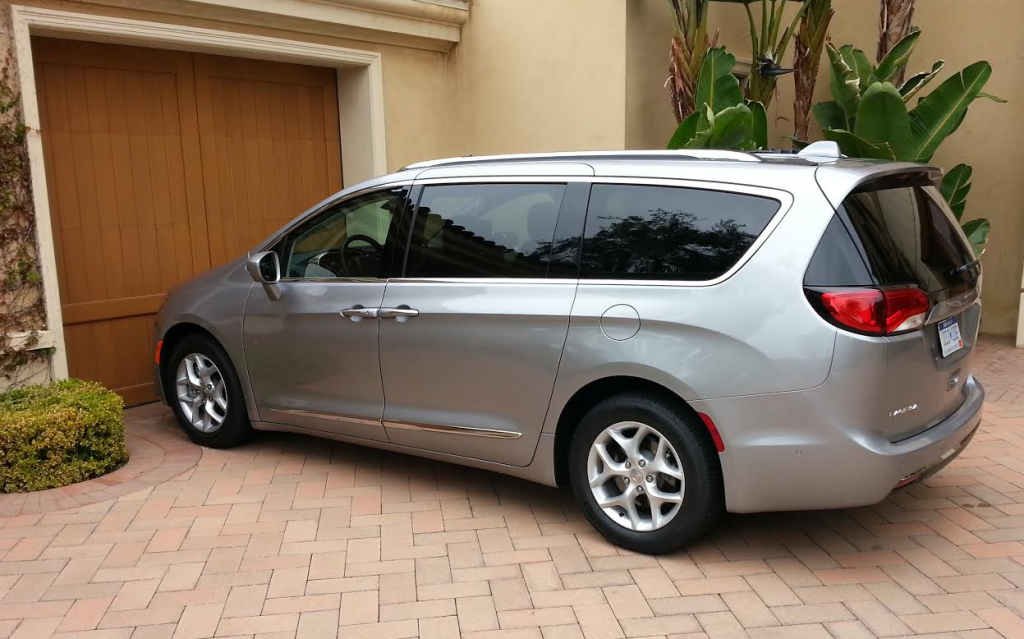 Dramatic bodyside sculpting adds to the Pacifica’s stylish look, as does the “wraparound” rear-window styling (the window doesn’t actually wrap around).

We’ll get to the nitty-gritty of that in a minute, but first some housekeeping: The Chrysler Town & Country’s sibling, the Dodge Grand Caravan, is gone after the current generation and will not see a replacement; the Chrysler Pacifica will be FCA’s sole entry in the segment. Slated for launch in the second half of 2016 is the 2017 Pacifica Hybrid—the first hybrid offering in the minivan class. Actually, it’s a plug-in hybrid system: a 16-kWH lithium-ion battery and a dual-motor electrically variable transmission (EVT) are paired with Chrysler’s 3.6-liter Pentastar V6 for a total output of 260 horsepower. Chrysler estimates that the Pacifica Hybrid will deliver up to 30 miles of all-electric driving range and up to 80 miles per gallon equivalent (MPGe) in city driving. 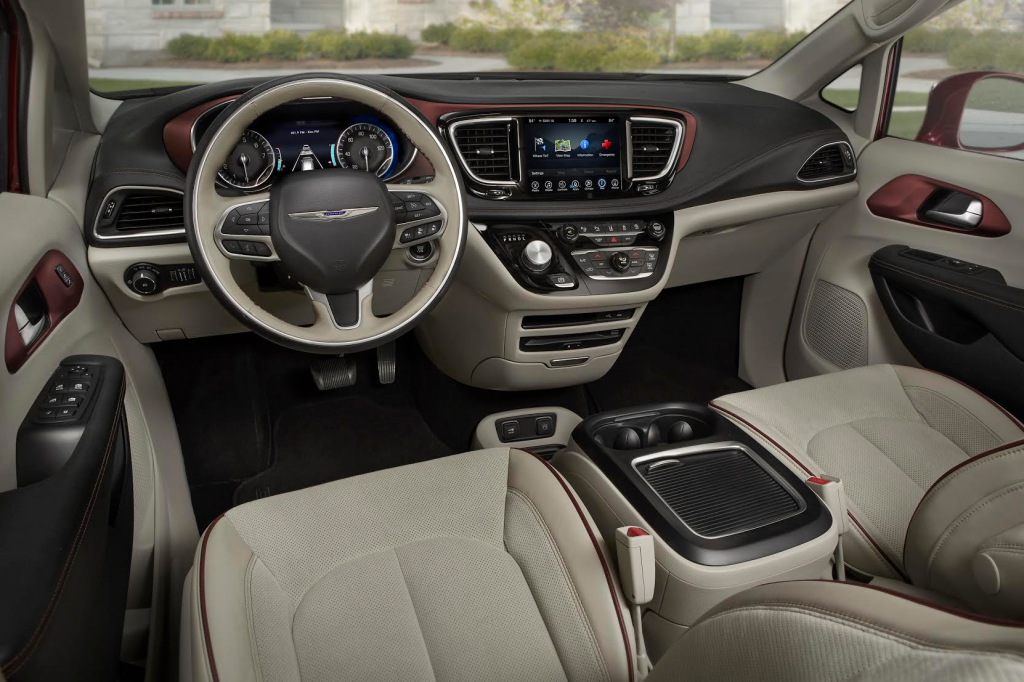 The Pacifica’s dashboard is attractive and functional. We are especially fond of the rotary-dial shifter, though the sheer number of touchscreen functions can make accessing certain features somewhat tedious.

The Pacifica Hybrid wasn’t available to test, but we spent plenty of seat time in gas-engine Pacificas, all of which are powered by the 3.6-liter Pentastar V6 mated to a TorqueFlite 9-speed automatic transmission. The 3.6 is rated here at 287 horsepower, which trumps every other minivan in the class (the Kia Sedona, with its 276 hp, comes closest). And, despite its horsepower advantage, the Pacifica’s 18 mpg city/28 highway/22 combined fuel-economy rating puts it among the best in the class as well (the 248-hp Honda Odyssey is rated at 19 mpg city, and the 260-hp Nissan Quest has a 23-mpg combined rating). Also, a fuel-saving engine stop/start feature is slated to become available in Pacifica later in the model year.

In our test drives, the V6 provided ample acceleration both around town and on the highway. The 9-speed transmission shifts smoothly, but occasionally dithered a bit before kicking down for extra power in highway passing situations. We also found the throttle-pedal response to be almost too snappy from a stop—supplying a bit too much power when accelerating from a standstill—but most drivers should be able to acclimate quickly.

On the road, Pacifica’s overall noise levels are impressively low, thanks in part to its standard Active Noise Cancellation system. The engine note is scarcely noticeable when cruising, and rises to an aggressive-but-muffled growl in fast acceleration. Wind noise is similarly subdued, though tire noise can become prominent when traveling over concrete highways and/or rough roads. 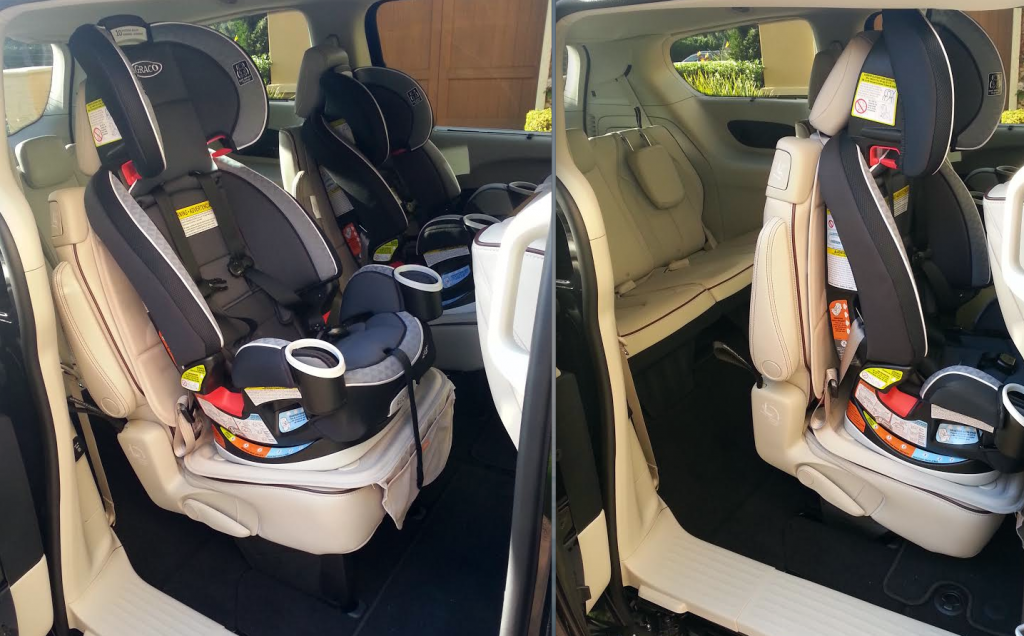 The second-row Stow ‘n Go seats now have an “Easy Tilt” feature that opens up a pathway to the third-row–even when a car seat is installed.

Pacifica’s rigid new body structure contributes to excellent ride and handling for the class. Chrysler says the Pacifica’s torsional stiffness is twice that of the outgoing Town & Country, and weight-saving measures (such as extensive use of aluminum, and a few magnesium components) have trimmed curb weights by around 250 pounds model-to-model from the Town & Country. The Pacifica’s ride is very absorbent and composed, even over sharp bumps and pronounced pavement undulations. (The 20-inch wheels available on top-line Limited models exact a very minor toll on ride quality.) Well-tuned power steering helps Pacifica feel capable and predictable in turns, if not exactly agile. Take a fast corner, and you’ll quickly get a sense of the Pacifica’s size and heft, though it’s perfectly on par with its competition.

A relatively tight turning radius helps the Pacifica feel manageable in close-quarters maneuvering, as does its new rotary-dial gear selector. Chrysler first started using this type of shifter on its RAM pickup trucks, but it’s especially well suited to the Pacifica. The knob is situated on an angled panel close the steering wheel, and using it quickly becomes second nature. We found it much more convenient than a conventional shift lever in frequent forward/reverse-gear driving situations, such as backing out of a tight parking spot. 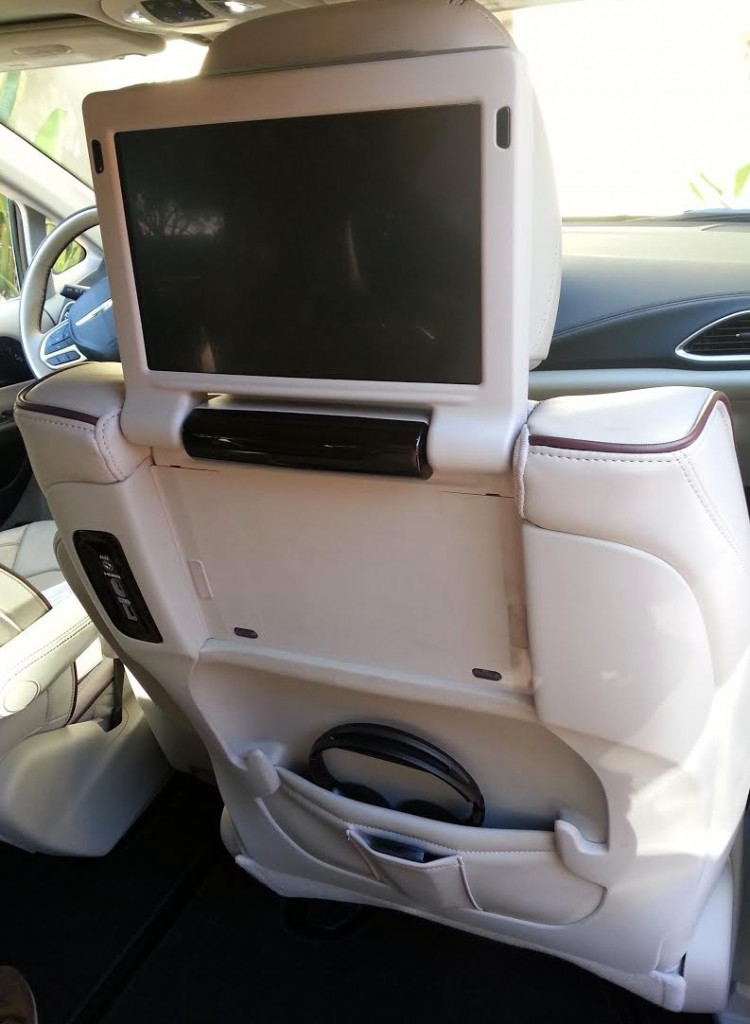 The UConnect Theater system’s high-definition screens flip up from the front seatbacks. The input jacks are visible at the left; the headphones and remote are stored in seatback pouches. The molded-in bag hooks are a handy touch.

A minivan’s on-road performance is certainly important, but it often plays second fiddle to interior comfort and versatility. It’s here where the new Pacifica makes the strongest case for itself. The Chrysler/Dodge minivans’ traditional trump card—the collapsible Stow ‘n Go second-row seats—are now standard in all gas-engine Pacificas (the hybrid will do without, since its battery pack takes up that space). In addition to the previous fold-into-the-floor functionality, the Stow ‘n Go seats now feature “Easy Tilt” access to the third row (even with an empty child seat installed) and Stow ‘n Go Assist, which powers the front seat forward with the press of a B-pillar-mounted button so the panels covering the floor-mounted bin can be flipped up easily and the second-row seat can be collapsed into the bin. After the seat is stowed and the floor panels latched down again, another press of the button powers the front seat back to its original position. Stow ‘n Go Assist is standard on the driver’s seat in all models and standard on the passenger seat in upper-line models. Also standard on upper-line models are heated second-row seats.

Given their all-manual operation, the Stow ‘n Go seats are quite easy to use. When the seats are deployed, the floor bins double as handy hidden storage space; Chrysler offers separate plastic bins that are ideal for wet or dirty items, or for filling with ice for use as a picnic cooler. Since the seats themselves have to be compact enough to fold into the floor, they’re not quite as cushy as those in other minivans, but I found them perfectly comfortable. The Stow ‘n Go functionality also precludes any fore-and-aft adjustability, but I found the second-row legroom to be adequate for my 6’6” frame. Likewise, the third row is spacious enough for average-sized adults to be quite comfortable. Eight-passenger seating is available via a removable center seat that fits between the second-row seats. Once the second- and third-row seats are folded into the floor, the Pacifica claims a best-in-class maximum cargo volume of 140.5 cubic feet. Chrysler says an 8×4-foot sheet of plywood (the typical minivan hauling-capacity benchmark) will fit in the cargo area.

Pacifica’s noteworthy available features include a “Stow ‘n Vac” integrated vacuum, a tri-pane panoramic sunroof, and a UConnect Theater rear-seat entertainment system. The vacuum hose and attachments are accessed just behind the driver’s-side sliding door, and the nozzle is capable of reaching all corners of the interior. The dust bin and filter are easy to access and clean, but they take up the space used by the space-saver spare at the rear of the vehicle. So, opting for the vacuum also means opting for a fix-a-flat inflator kit. 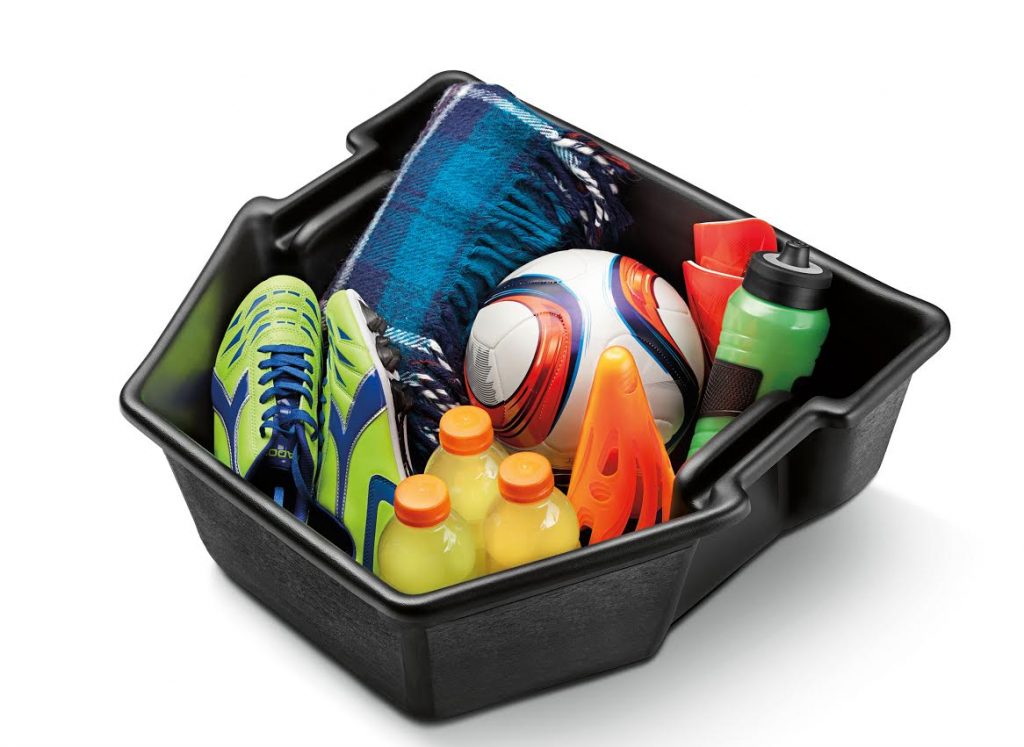 Chrysler offers a number of handy accessories for the Pacifica, including a plastic bin that fits into the empty Stow ‘n Go floor wells.

The panoramic sunroof (offered only on top-line Limited models) features a dual-pane opening panel over the first two rows and a fixed pane over the third-row seats. I’m not a big fan of panoramic sunroofs, but I must admit that the Pacifica’s tri-pane setup brings a much airier feel to the interior with a negligible cost to headroom.

However, opting for the available UConnect Theater rear-seat entertainment system will probably mean that your kids’ eyes will be glued to the two high-definition 10-inch touchscreens instead of looking outside. Each front-seatback-mounted screen has its own auxiliary, USB, and HDMI input jacks, as well as a pair of headphones and a touchpad remote control (for little ones who are too small to reach the screen, or older kids who are too lazy to). Internet connectivity and built-in video games such as checkers and tic-tac-toe are also part of the deal, as is a cute “Are We There Yet?” app that answers that age-old question via a cartoon display with trip info (including the all-important time of arrival) when a destination is programmed into the navigation system. The sheer number of functions made for some fairly complicated control procedures when using either the touchscreen or the remote; your kids will probably figure it out before you do.

Also available are a hands-free liftgate and industry-first hands-free sliding side doors, which are operated by making a kicking motion under the doors or liftgate with the keyfob on your person. Available safety features include a 360-degree Surround View camera, parallel- and perpendicular park assist, blind-spot monitor, forward collision warning with autonomous braking, and adaptive cruise control that can bring the vehicle to a controlled stop under certain circumstances. The lane-departure warning system can deliver a “nudge” through the electric power steering system that alerts the driver and assists in making a corrective steering input. The Surround View camera worked especially well in our tests, providing a clear, easy-to-decipher bird’s-eye view of the area around the vehicle; it made close-quarters maneuvering much less stressful. 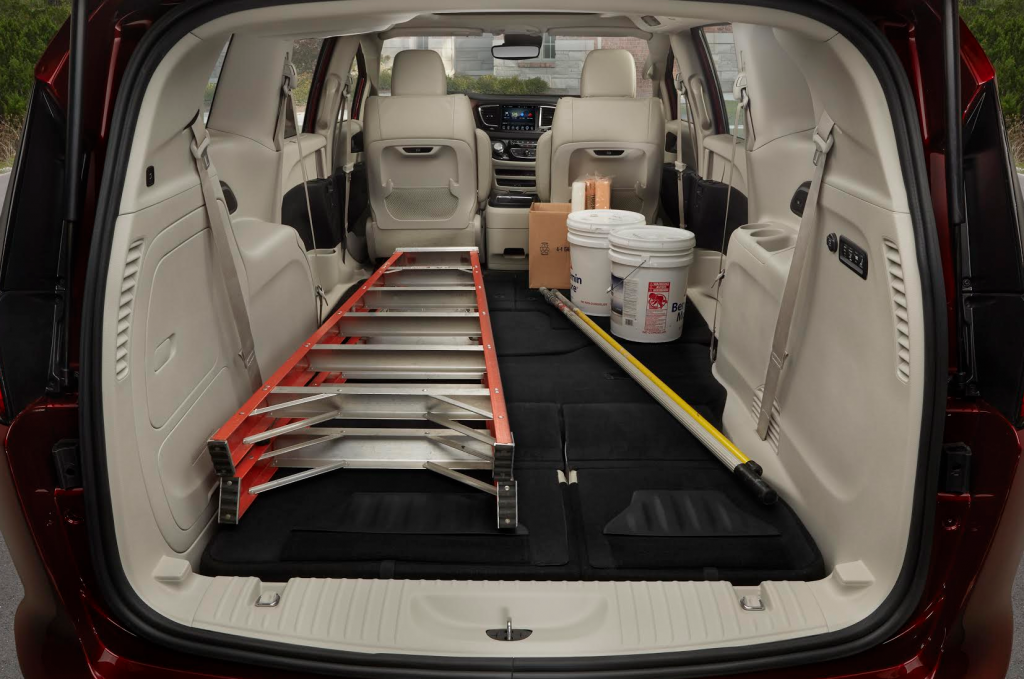 With the second- and third-row seats folded, Pacifica boasts a best-in-class cargo-volume rating of 140.5 cubic feet.

The cabin materials and overall interior ambiance were impressive in the Touring-L Plus and Limited models we tested. Handsome leather upholstery with contrast stitching, good instrument panel “eye candy,” and, on Limited models, a padded dash and two-tone steering-wheel rim are among the highlights. In top-line trim at least, the Pacifica has the most luxurious interior in its class. We’d also call it the best-looking; Pacifica’s confident exterior design is full of interesting, unconventional details—such as swoopy LED headlight trim, a “wraparound” rear-window treatment, backswept C-pillar, and deft use of chrome highlights—that make it about as stylish as a minivan can get.

The 2017 Chrysler Pacifica is one of the most significant new-model intros of the year, in no small part because of the aged status of Fiat-Chrysler’s current minivan offering. The 2016 Town & Country’s basic design dates back to the 2008 model year, and it was especially in need of a ground-up re-do. The new Pacifica hits all the minivan “must-haves” and then some.