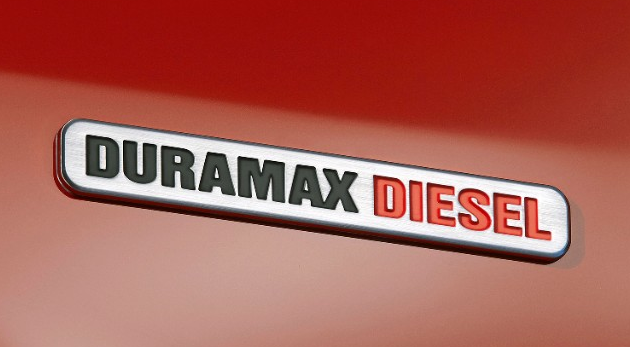 When Chevrolet re-introduced its Colorado compact pickup for 2015, the company announced the intention to offer a diesel engine within a year. And it has kept that promise, despite the fact that gas prices are low (and many experts expect them to remain that way for the foreseeable future), which tends to make thriftier but more expensive diesels less attractive from a sales standpoint. 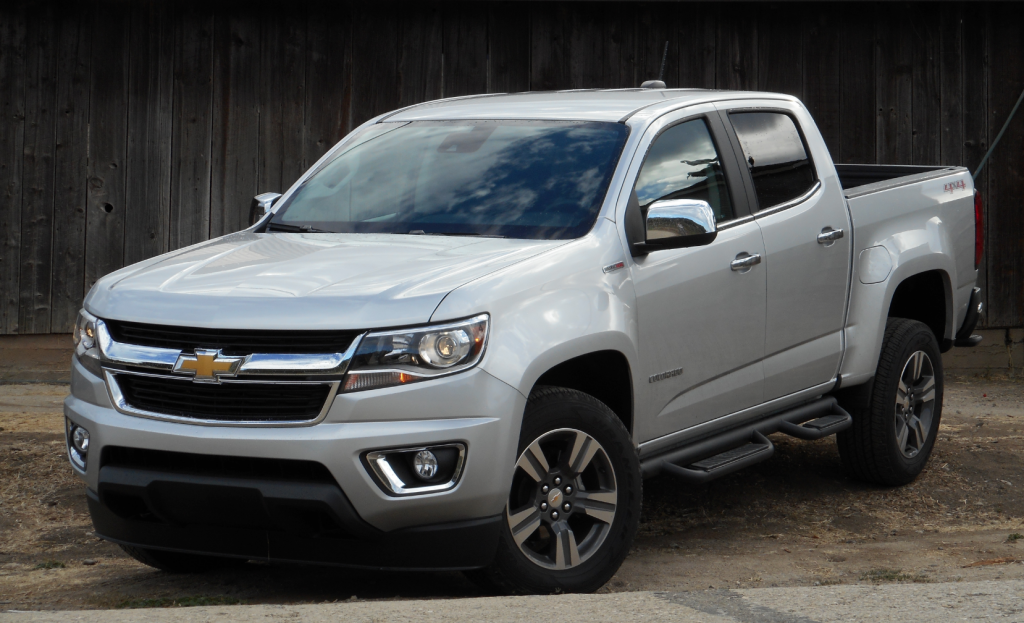 For 2016, the Chevrolet Colorado compact pickup adds a diesel-engine option, the first to be offered in the class since the 1980s. The badge signifying it (shown above) can be seen just ahead of the sideview mirror.

Though new to the Colorado, the 2.8-liter 4-cylinder Duramax turbodiesel isn’t really “new.” The basic engine has been in production since 2011 for sale in other countries, though it’s been modified—in part for quieter operation—for the U.S. market.

In this form it produces 181 horsepower at 3400 rpm and an impressive 369 lb-ft of torque at 2000 rpm, with 90 percent of that torque available from 1400-2800 rpm. It provides a 7700-lb towing capacity in 2-wheel drive Colorados, 7600 in 4WD versions; those figures are 600-700 lbs higher than with the available 3.6-liter V6, which offers 100 fewer lb-ft of torque. Trailer-towing features offered only with the diesel engine include an exhaust-brake system that reduces brake wear and fade on downhill runs, along with an integrated trailer brake controller.

As with all current passenger-use diesels, the Duramax uses a urea after-treatment system that requires the periodic filling of an AdBlue tank.

EPA figures had not been released at the time of this writing. However, in a brief preview test of a 4WD model under an admittedly “easy” mix of city and highway driving, the trip computer put us at 29.7 mpg. Fellow writers in 2WD versions consistently topped 30 mpg. (With the Colorado’s 21-gallon fuel tank, that puts potential range at about 600 miles.) By contrast, a 4WD Colorado with the gas V6 tested at our Chicago-area office averaged 17.4 mpg, though that was in mostly hard city driving. 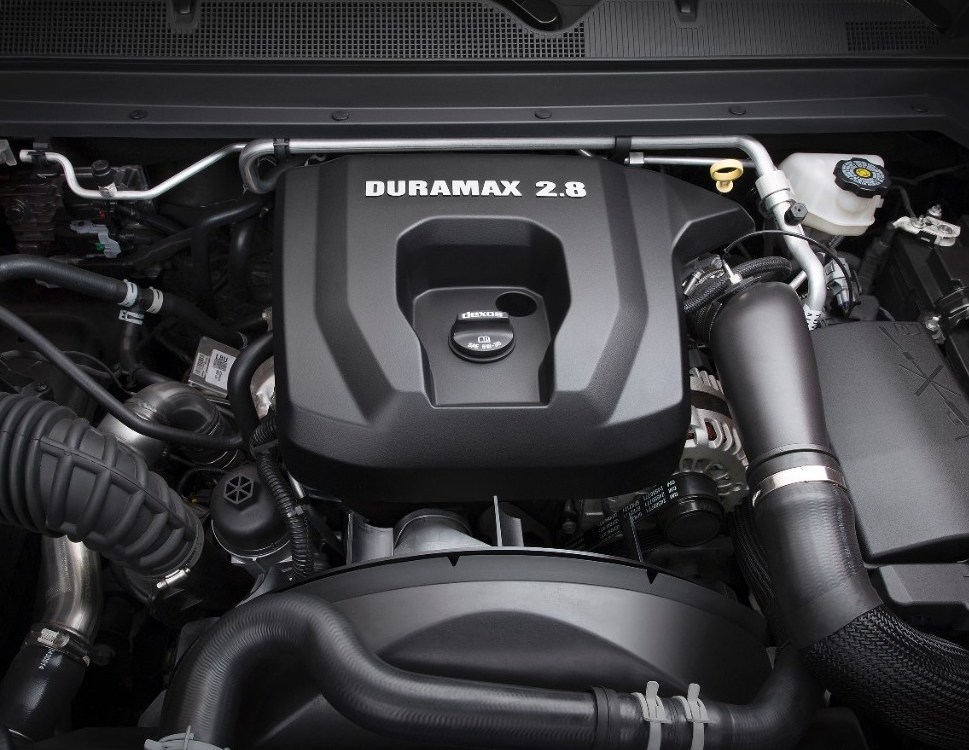 As discovered on a recent preview event, the Colorado’s diesel-driving experience is a bit different than with the gas V6.

In our 4WD Colorado V6 tester, flooring the gas from a stop resulted in what one driver termed “measured” throttle response, but power built quickly and linearly with some noticeable engine roar. With the diesel, nailing the “gas” brings a rather leisurely take-off followed about 6-8 feet out with a strong surge of power. There’s more engine noise at idle and under acceleration than with the V6, but it’s not the loud “clatter” usually associated with diesels, and it’s not heard at all under cruise conditions. (Note that the full measure of the diesel’s lofty 369 lb-ft of torque can be unleashed off the line by deactivating the traction control and brake-torqueing the engine, a combination that yields tire-smoking starts, at least in 2-wheel drive. So if your truck is frequently driven by your teen-age son and the rear tires seem to be wearing quickly, it should be pretty clear as to why.)

In other ways, the Colorado diesel is the same impressive truck we’ve been enamored with since its 2015 redesign. It’s fairly roomy in crew-cab form (less so as an extended cab), rides and handles quite well for a pickup, and offers a host of features such as standard rearview camera, along with available OnStar assistance system, 4G LTE Wi-Fi hotspot, forward collision warning, and lane-departure warning. Newly available for 2016 is an enhanced MyLink infotainment system with text message support, Siri Eyes Free, and Apple CarPlay feature. 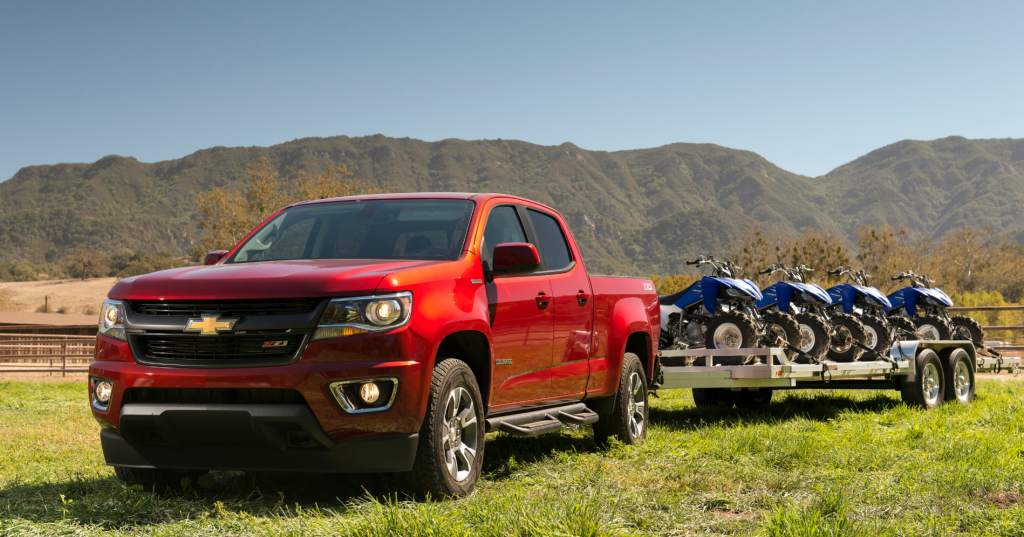 One salient element that had not been established at the time of our preview drive was the diesel’s cost. On Chevy’s full-size heavy-duty pickups, choosing the diesel V8 over the gas V8 adds nearly $8400 to the bottom line, while the full-size Ram 1500 makes a V6 diesel optional over a gas V6 for about $4300.

In this age of comparatively low gas prices, diesels become tougher to justify unless added towing ability is your primary motivation. We’ll keep you posted when Colorado’s diesel mpg and cost figures become available, but it’s worth remembering that the diesel not only brings more towing capacity–currently the highest in the compact class–but also more towing features, which might be of interest if you really don’t want to move up to a full-size pickup.

Note that the mechanically similar GMC Canyon will also be available with the Duramax diesel engine.