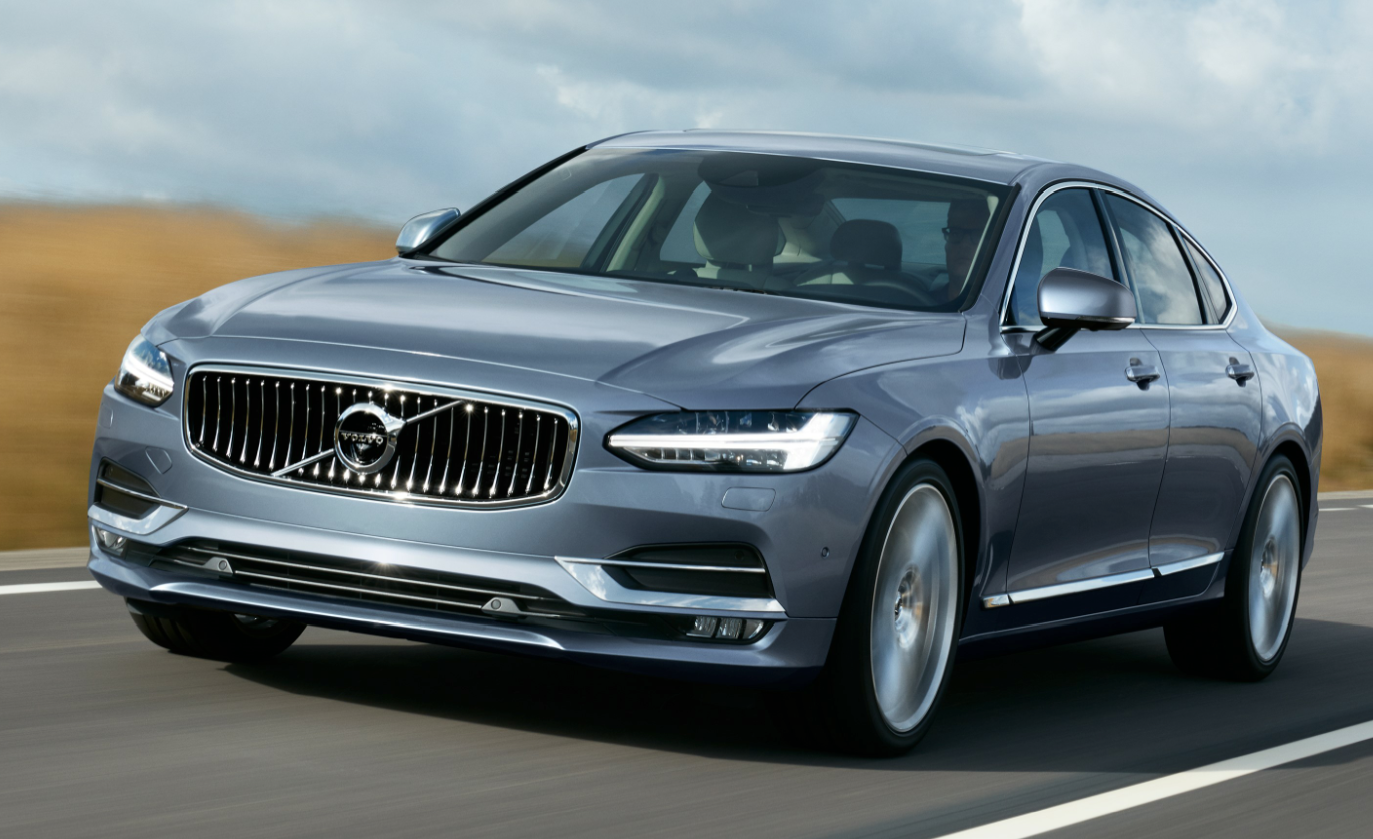 The all-new S90 replaces the S80 as Volvo’s flagship sedan for 2017. Behind its “Thor’s Hammer” (Volvo’s term) LED headlights resides a choice of turbocharged or turbocharged/supercharged 2.0-liter 4-cylinder engines putting out 250 and 316 horsepower, respectively. The midsize S90 is going on sale now at prices starting around $48,000.

Perhaps it says something about the near-invisibility of your current entry when market-share aspirations for its redesigned replacement are … five percent. But that’s the rather modest goal Volvo has established for the 2017 S90, which replaces the aged S80 as the company’s flagship sedan.

Although it borders on full-size, we consider the new S90 to be a premium midsize car based on dimensions, as is the company’s smaller S60. Indeed, Volvo lists other premium midsize sedans among direct competitors, though it concedes that few BMW 5-Series intenders are likely to consider an S90, as Volvo isn’t marketing it as any kind of sport sedan. Instead, the company seems to be refocusing on its more established safety roots. 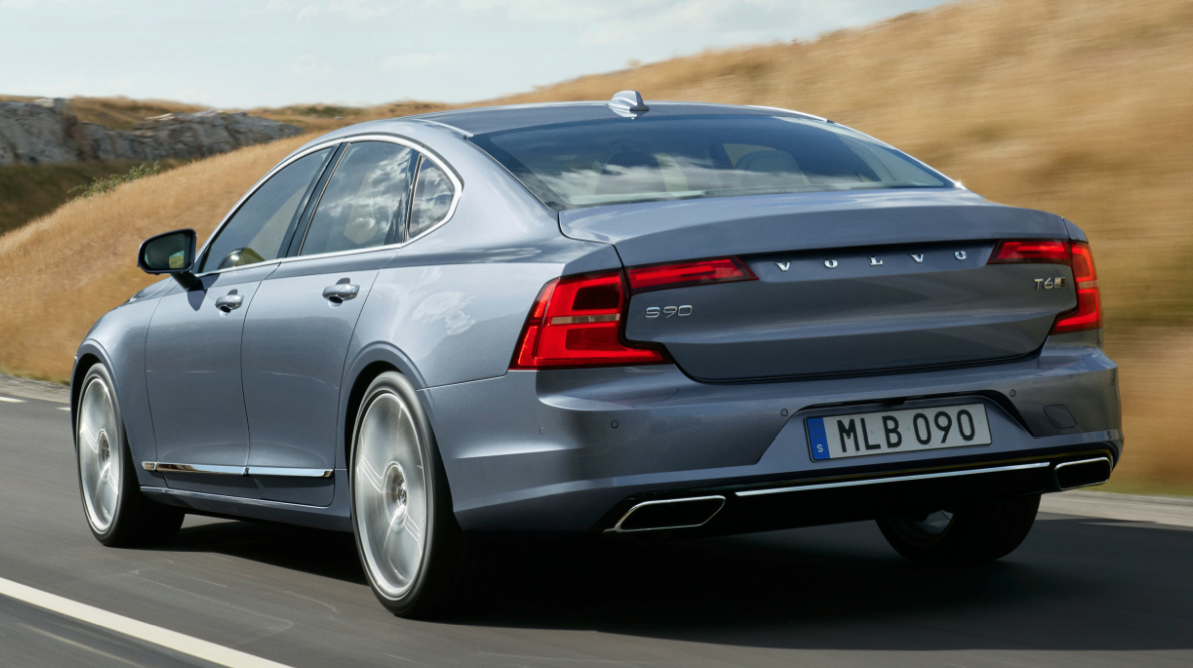 The S90 shares its platform with Volvo’s XC90 premium-midsize SUV, and is likewise offered in front- and all-wheel-drive form.

That’s not to say, however, that the S90 is not sporting. Although both engines offered are 2.0-liter fours – modest for the premium class – they’re rather potent little powerplants. The one in the base front-drive T5 is turbocharged to make 250 horsepower, while the version in the all-wheel-drive T6 boasts both a turbocharger and a supercharger to make 316 horsepower. (If those specifications sound familiar, you’re up on current Volvo technology; they’re the same two engines offered in the XC90 midsize SUV introduced last year. Due later is the XC90’s T8 hybrid powertrain.) Both come with an 8-speed automatic transmission. Volvo says the T5 scoots from 0-60 mph in 6.5 seconds – a respectable figure – while the T6 manages it in a relatively quick 5.7. All S90s come with a Drive Mode selector that offers four different driving modes – Eco, Comfort, Dynamic, and customizable Individual – that alter steering weight, suspension damping, transmission shifting, throttle sensitivity, and stop/start settings.

Both the T5 and T6 will be offered in two trim levels: Momentum and upscale Inscription. Base prices start at $47,995 including destination for a T5 Momentum and run up to $57,245 for the T6 Inscription, which tops out in the mid 60s with options.

The S90 shares its SPA (Scalable Product Architecture) platform with the XC90, and they also have very similar dashboards. That includes a large, 9-inch, vertically oriented center touchscreen that uses infrared sensing so that it works when wearing gloves. 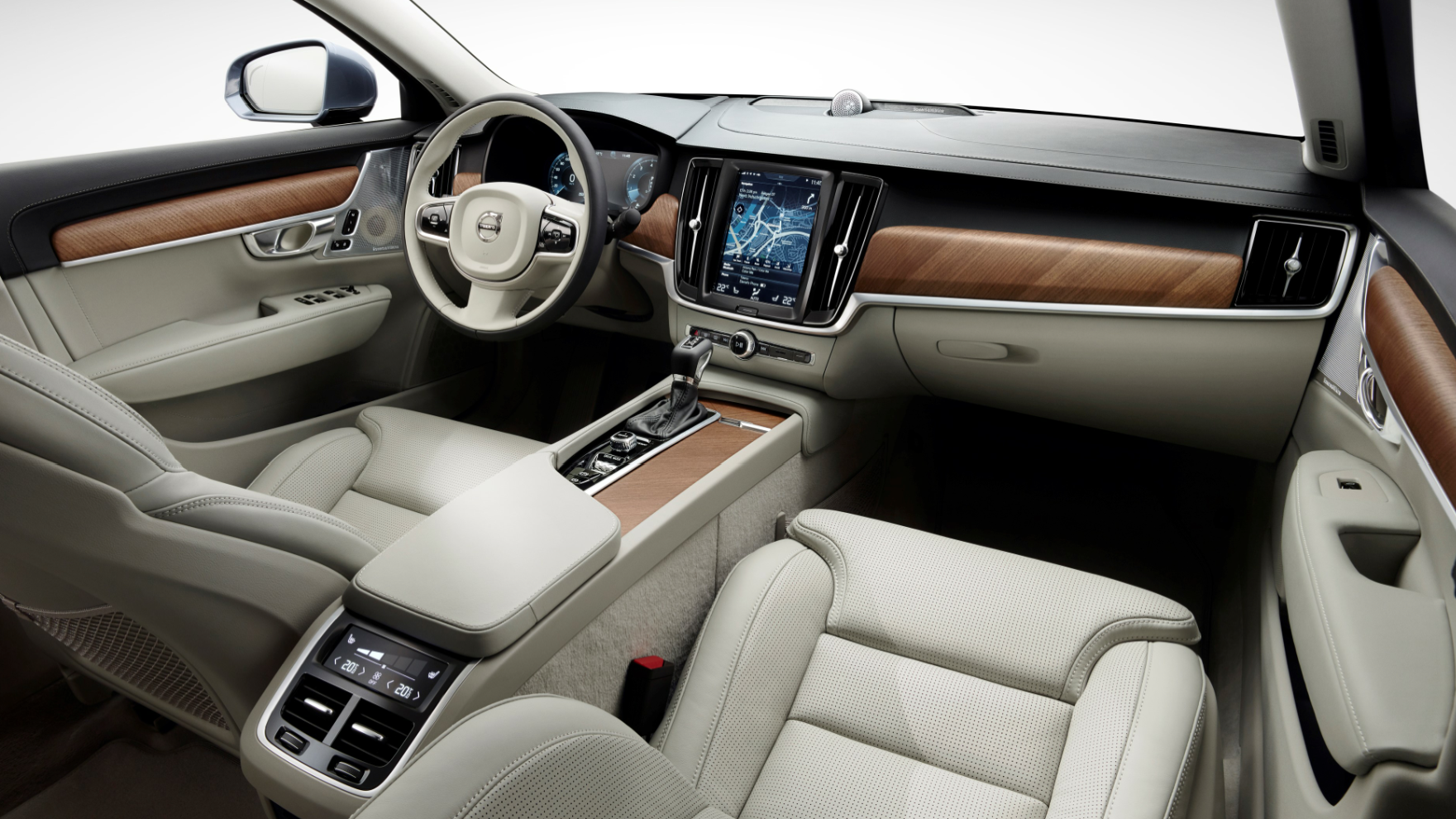 The interior is a study in clean design and luxurious trappings.

The Volvo brand has long been synonymous with safety, and the S90 introduces a couple of what the company claims are “World’s First”’ technologies. One is Large Animal Detection, which can identify deer and moose and warn the driver of an impeding impact, and automatically brake the car if the driver doesn’t. The second is Run-off Road Mitigation. This differs from the more common lane-departure warning in that the latter needs to “see” stripes on the road to function; Run-off Road Mitigation is said to be able to identify the edge of a road – stripes or no stripes – and steer the car back into the lane. Both of these features are standard on all models, as are conventional forward collision warning and mitigation, lane-departure warning, rearview camera, and rear obstacle detection. Optional on all are blind-spot alert, rear cross-traffic alert, and 360-degree Surround View Camera.

Other available luxury and convenience features largely mirror those available on other premium-class cars, but there are some that merit mention. Standard are 4G LTE WiFi hotspot and memory driver seat/mirror settings, though the latter doesn’t include the tilt/telescopic steering-wheel settings, as those are (oddly) manual. Optional on all is the aforementioned head-up display, along with power driver-seat cushion extension and side support, heated windshield-washer nozzles, high-pressure headlight cleaners, power trunklid, rear air suspension, and an electrically heated windshield (not available with the head-up display).

The only models made available for testing were loaded T6 Inscriptions – all in Mussel Blue – with a bottom line of $66,105. And the only roads ran through the ritzy Hamptons area of Long Island, New York, where rough pavement has been legislated out of existence. So, apparently, have twisting high-speed turns and straightaways (probably too bawdy for the locals), meaning our test drive wasn’t particularly taxing. However, we did manage to seek out a few potholes and back-roads corners (found only because we ventured off route for photo ops), which gave a decent impression of chassis dynamics – though we’ll get a better idea when we drive an S90 around our Chicagoland headquarters.

Smaller bumps were soaked up quite well, though larger ones we found were more noticed. Possibly adding to the effect were the optional 20-inch wheels and tires fitted to our test vehicle, which replaced the standard 19s (18s on Momentums). And that was in Comfort mode. Switching to Dynamic added some brittleness, but also a more sporting steering and handling feel, which was hardly soggy to begin with. 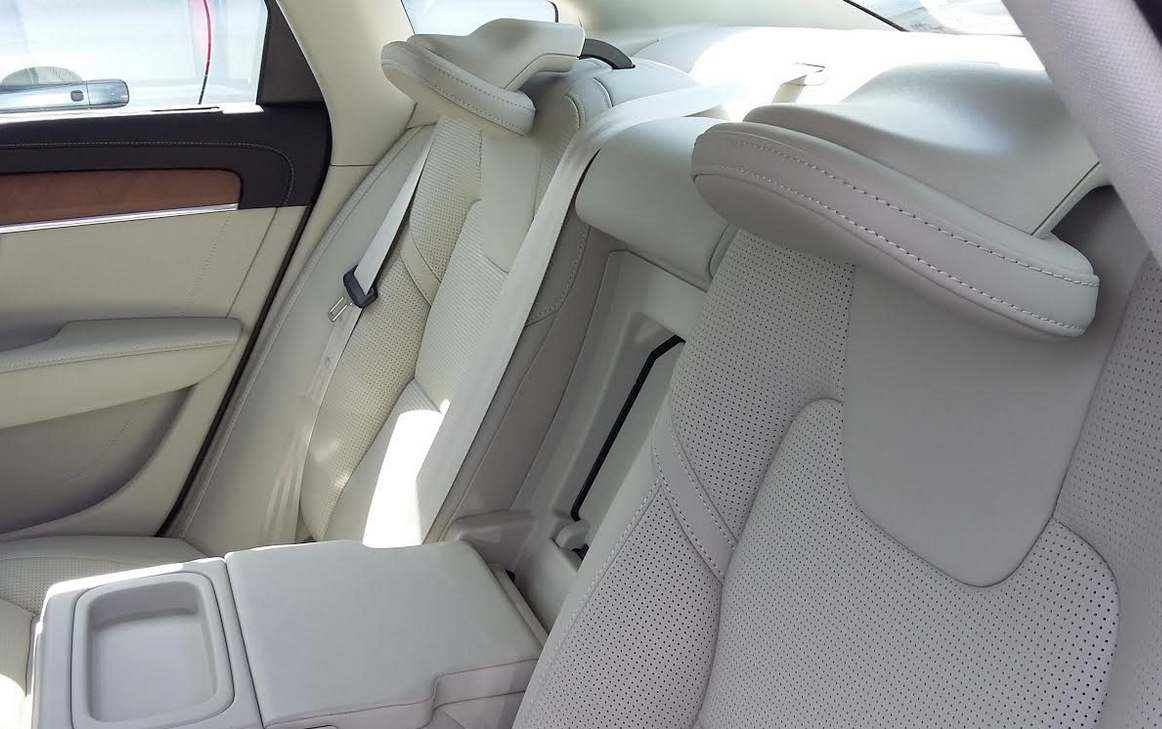 Rear-seat headrests fold forward with the push of a dashboard button to clear the rear view. Oddly, the between-seats ski pass-through opens from the back, meaning you first have to fold down one of the rear seat backs to access the latch.

Small turbocharged 4-cylinder engines typically feel a bit lethargic until boost arrives, which can be fairly quickly at higher speeds, far less so on takeoffs from a stop. But probably thanks to its supercharger – which boosts low-speed power before the turbo kicks in at higher speeds – the T6 provides a fairly decent launch, though not as strong as a good V6. Tip into the throttle at speed, and the transmission kicks down fairly quickly for more power. There’s a fairly unobtrusive stop/start system (which aids city fuel economy as part of the T6’s 22/31/25 EPA rating –about 1-3 mpg less than the T5’s) that shuts off the engine at stops, but it can be switched off via a dashboard button if it annoys you in stop-and-go traffic. So all in all, we’d say the T6, at least, is quite dynamically capable.

More in tune with the car’s mission is luxury, and the S90 fulfills that impressively well. Volvo refers to it as “a Scandinavian Sanctuary,” which seems a valid description. The interior is fitted with a refined and even sumptuous combination of padded two-tone surfaces highlighted with vast expanses of real wood and metal trim, along with some neat knurled control knobs and an optional crystal shift knob (not fitted to our test car). And though we didn’t get to drive it over rough roads or at high speeds, it seemed serene inside, with any trace of noise easily cancelled out by the car’s optional (and excellent) Bowers & Wilkins sound system, tuned to replicate a concert hall. 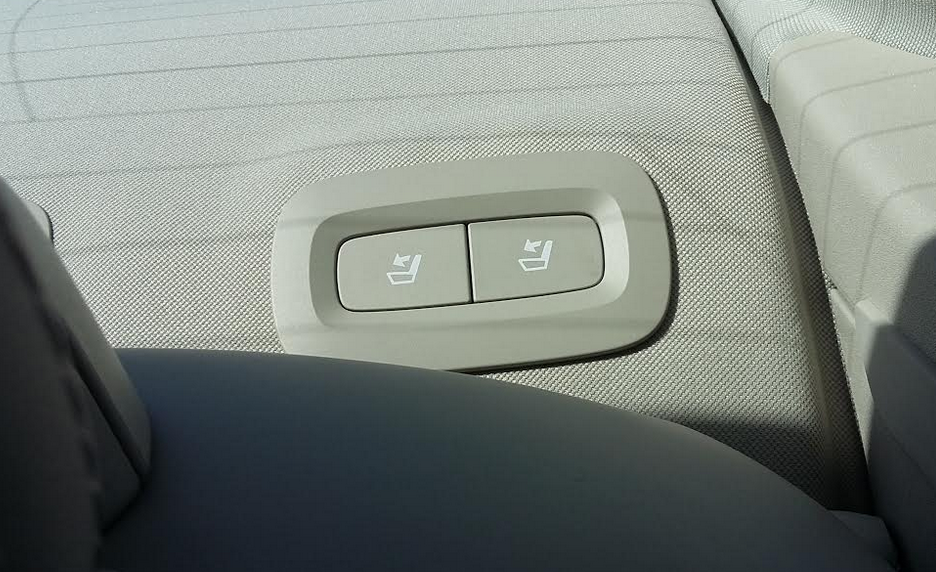 Both rear seat-back releases are on the driver side, which is handy … unless you’re on the passenger side.

Legroom in front is very good rather than great, but that would likely be a concern only to the very tall. It’s ample in back behind a normal-size driver, and is even okay with the seat ahead pushed far rearward, though the tall, wide center tunnel might make foot room scarce for a middle passenger. Headroom is great all around. Two notables: The driver’s seat cushion has an extendable cushion up front that is a boon for taller drivers, but though the seat cushion tilted, I personally found the front edge was a bit too high even at its lowest setting. Also, there were times – in bright sunlight –when the dashboard reflected rather strongly in the windshield.

Visibility is good to the front and rear corners, a bit less so to the sides due to thick roof pillars. Notable here are that the rear headrests can be flipped forward to clear the rear view by pressing a button on the dash, and the four cameras used to give a 360-degree view around the vehicle can be selected individually, allowing for a 180-degree view when backing (so you can see both ways down a parking-lot aisle) or a right-side view of the curb (to avoid damaging those nice wheels). On the negative side, the sunvisors don’t extend when pivoted to cover the side windows, leaving a 3-inch gap for sun to shine through.

Volvo makes a big deal of its unusual (claimed to be patented) center-screen control layout, and while it’s certainly better than most, you have to know its secrets. The first is that the main screen is supplemented with left and right screens that you access by swiping from side to side. While this is normal for a cell phone, it’s not for a car, so Volvo’s banking – perhaps too much – that its dealers will point this out … or that buyers will actually read the thick owners manual, which is optimistic at best. Also, the main screen is split into four “tiles” (in Volvo speak) or “layers” (our speak), one each for Navigation, Audio, Phone, and Apps. Tap on one and it expands to include more data, but the others remain “compressed” on screen for quick transitioning from one to another. As the only other control is a volume knob, virtually everything is done through one of the three screens. It takes some experimenting to find where adjustments for certain features can be made (we found the owners manual to often be useless as an aid, as some things we searched for – such as the head-up display settings – weren’t listed in the Index under their normally accepted names), so playing around with it a bit before you need something is time well spent. 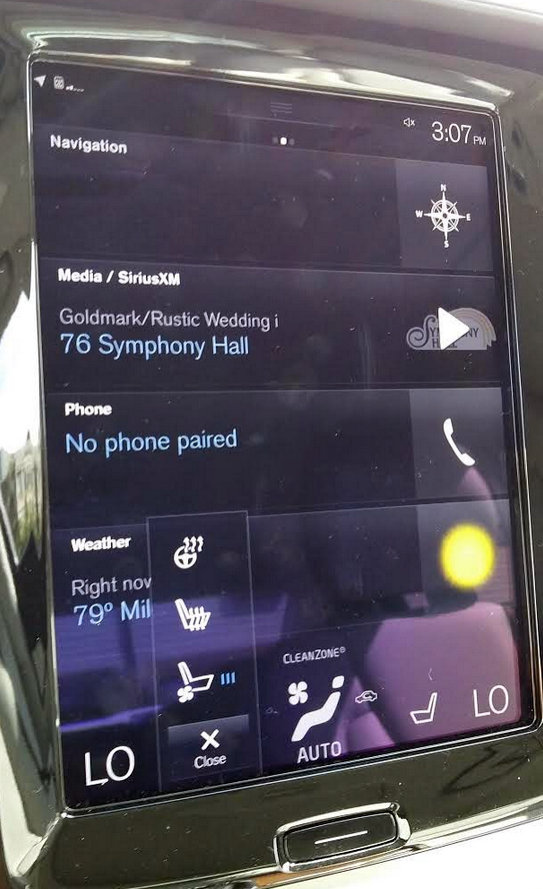 The S90’s vertical, 9-inch dashboard screen carries all control adjustments save for volume, which is adjusted by a conventional knob. This is the main screen, which is divided into four sections; there are supplemental screens to the left and right, reached by swiping across the surface like a cell phone.

Interior storage is just OK, mostly because none of the storage areas are very large. There’s a moderate-size 2-tier glovebox, two covered cupholders and two small bins with 12-volt plug in the console, small console box with Aux and USB jacks, a left-side dash bin, and small map pockets in the doors.

The trunk is narrow at the back with only a small indent on one wall that’s six inches above the floor; it’s doubtful a golf bag would fit sideways. There’s only a small amount of “unofficial” space under the cargo floor. The rear seat backs fold to expand the cargo area, and though they rest about three inches above the level of the trunk floor, there’s a gradual ramp leading up to them that should allow long items to simply be slid forward. Oddly, the electric seat-back release buttons are both on the driver side, which is convenient in a way, but can really stump you if you’re looking for one on the passenger side (guess how I know). There’s also a ski pass-through door in the rear seat back, but – unlike any other I’ve encountered – its release button is very inconveniently located (and awkward to actuate) on the back of the door, which means you have to lower one of the seat backs first to access it. (Someone from Volvo had to show me how to do it, as I couldn’t find this in the manual, either.)

From this experience, at least, the Volvo S90 seems aimed at a discerning audience that places safety and luxury ahead of performance and brand recognition. And that’s a good target the S90 hits on center. Yes, it has its quirks, but shoppers in this class who share those safety/luxury priorities would be well advised to give the S90 a look. And I rather think that may be more than five percent ….

The S90’s front wheel is placed far forward (at least, for a front-wheel-drive-based chassis), resulting in a long wheelbase and attractive proportions.