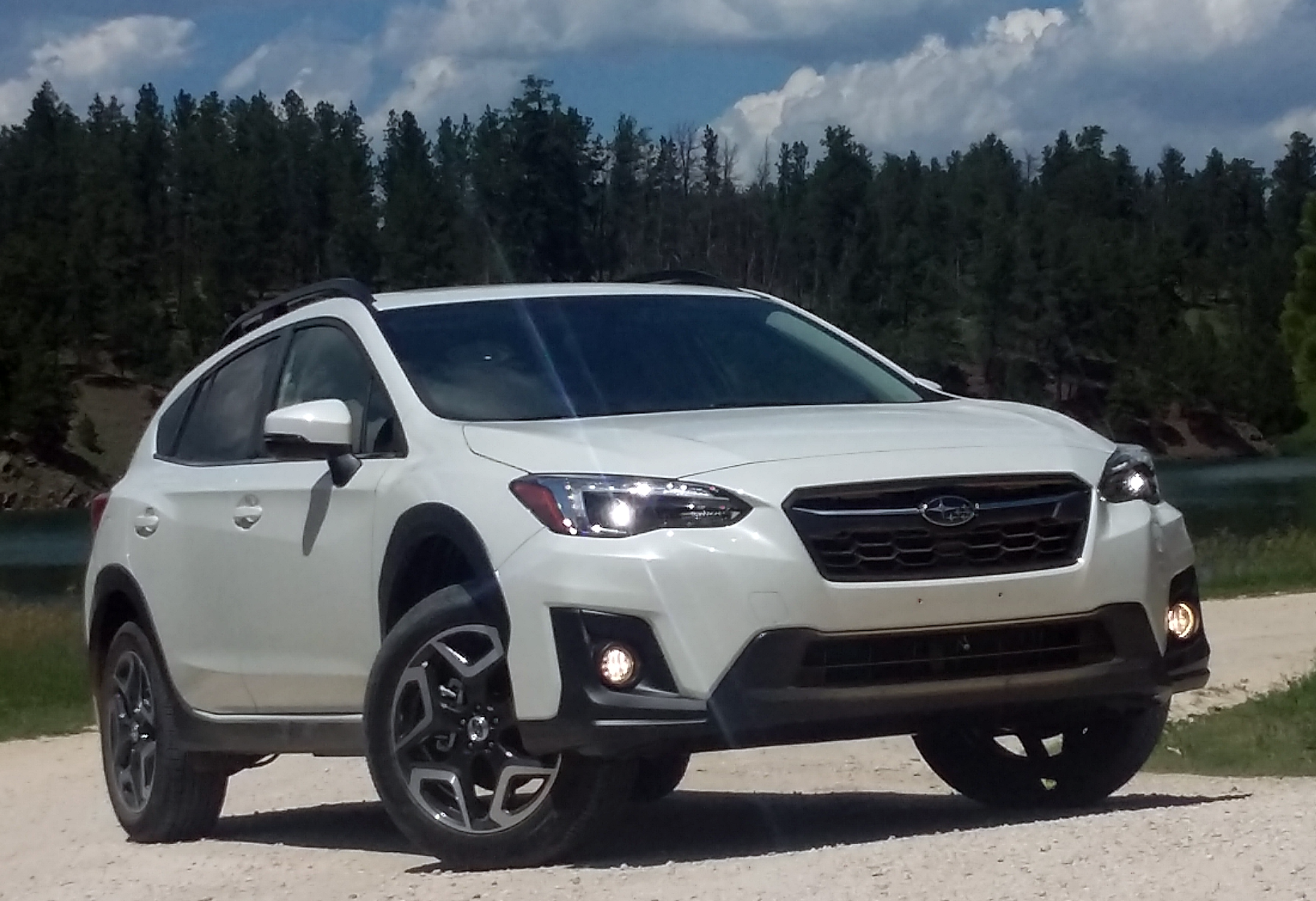 When introduced for 2013, the XV Crosstrek was essentially Subaru’s Impreza compact wagon set on stilts. Simplistic as that may sound, it was a formula the company had used nearly two decades earlier to turn the ho-hum Legacy wagon into the wildly successful Outback. And while the XV Crosstrek never quite matched its larger sibling in sales, the redesigned version arriving later this summer certainly has a chance to narrow the gap.

Toward the end of its run, the XV Crosstrek dropped its questionable prefix to become simply the “Crosstrek,” and that name carries on for 2018. So does the little SUV’s standard all-wheel drive and general size and look, though the new model adds about an inch of rear legroom and boasts more-dramatic bodyside creasing. 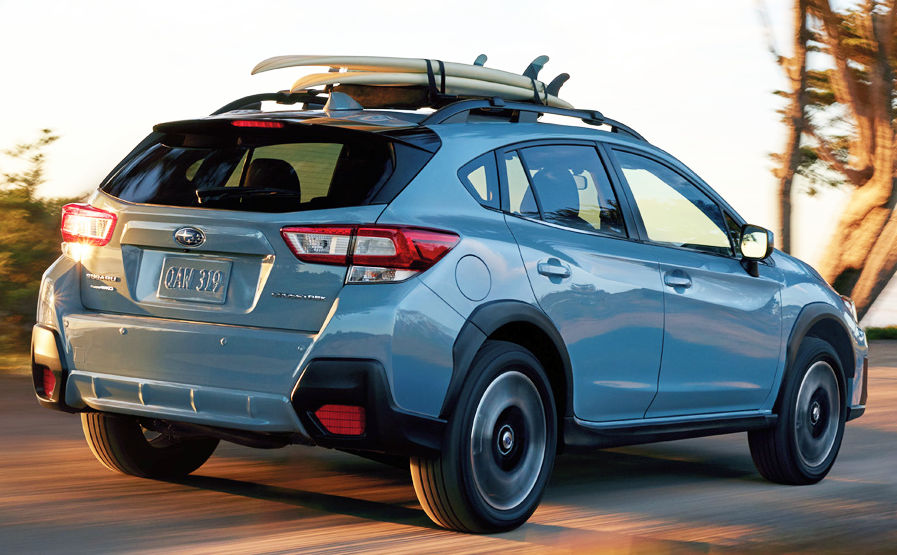 Also carried over are base 2.0i, Premium, and Limited trim levels. However, some features have been added (including standard Apple CarPlay/Android Auto for the base 2.0i, and available 18-inch wheels, two-tone leather upholstery, and rear automatic braking for the Limited), the 2.0-liter engine now puts out 152 horsepower vs. 148, and the standard 5-speed manual transmission has been replaced by a 6-speed. Notably, the base model — which used to come only with manual transmission — can now be optioned with the CVT automatic transmission, which means the price of entry for a Crosstrek with automatic drops by about $750.

Jumping to the top-line Limited brings 18-inch alloy wheels (versus 17s), 6-way power driver seat, adaptive LED headlights, automatic climate control, blind-spot/rear cross-traffic alert, 8.0-inch touchscreen infotainment system with navigation and CD player, leather upholstery, keyless access and starting, power moonroof, and the aforementioned CVT automatic. Options are similar to those available on the Premium, with the addition of an available Harman Kardon audio system. Load up a Limited, and it tops out at $30,655. 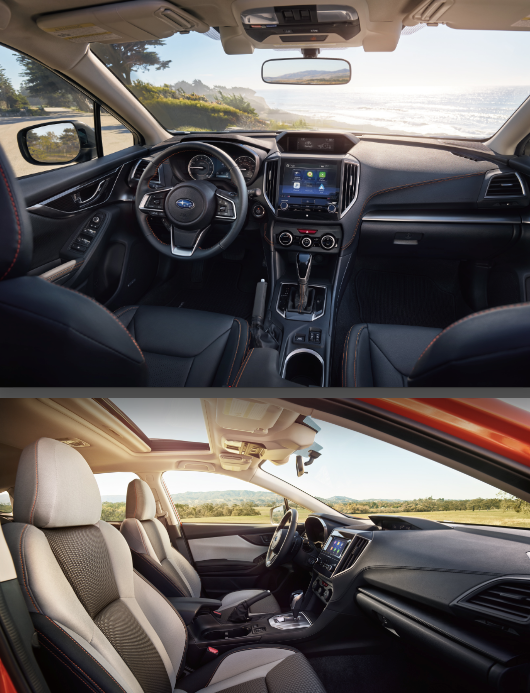 At 175.8 inches stem to stern, Crosstrek sits between traditional subcompact crossovers and compact-sized ones in length, though Consumer Guide® considers it a compact. In front, the supportive seats are comfortable, and there’s good legroom and great headroom for taller folks. With the added rear-seat legroom, normal-size adults can fit even behind a front seat pushed all the way back, with plenty of headroom for 6-footers.

Interiors are nicely padded (although padding on the door tops is thin) with nice-looking trim. Two-tone black/grey interiors — in both cloth and leather — add some contrast, and Premium and Limited get orange stitching.

Two areas we’re glad didn’t change are Subaru’s traditionally excellent visibility and equally impressive control layout. The latter consists of a central touchscreen flanked by volume and tuning knobs along with some physical pushbuttons, with source and station-select “virtual buttons” on the logically configured touchscreen. There’s also an upper dash screen that displays an assortment of information, though conspicuous by its absence is a compass.

Interior storage is good rather than great, but cargo space is better. With the redesign comes new taillights that are split by the hatchlid opening, allowing the opening itself to be straight on the sides rather than pinched in at the bottom half to clear the taillights as before, allowing the opening to accommodate wider cargo. When folded, the rear seat backs rest about two inches above the level of the cargo floor, but there’s a ramp bridging the gap that should allow longer boxes to be easily slid forward. The area is wide at the rear with convenient tie-down hooks and side-wall lights, but there’s no hidden storage under the floor. 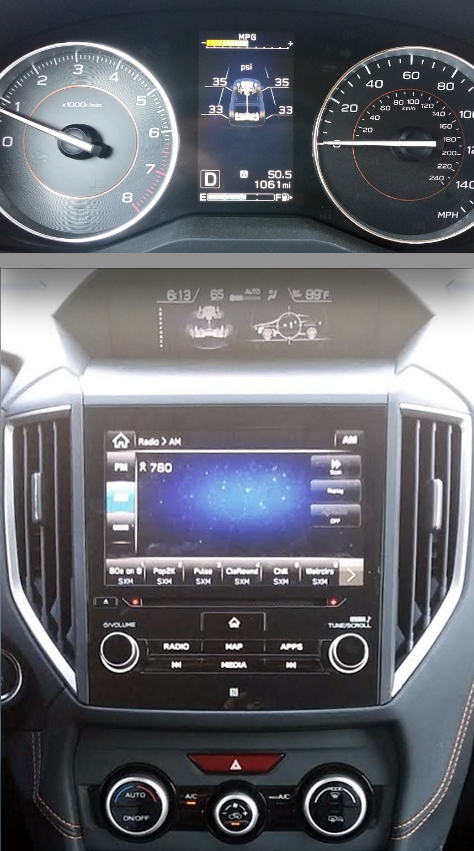 Top: Available on Premium and Limited are individual tire-pressure readouts. Bottom: Both the audio and climate controls make use of good ol’ knobs and buttons that make adjustments easier than in most modern vehicles.

Our preview route included plenty of bumpy roads, most off the pavement. Those and some twisting asphalt showed off the Crosstrek’s solid feel and great ride/handling combination, the latter complemented by the quicker steering ratio adopted for 2018. Newly combined with the CVT transmission is Subaru’s X-Mode system designed to improve off-road capability, and it includes hill-descent control — something that worked very well on a steep, rock-strewn downhill run, which also made use of what Subaru says is a best-in-class 8.7 inches of ground clearance.

If there’s a weakness to the Crosstrek, it’s … well … weakness. Its 2.0-liter engine and 152-horsepower rating are both on the low side for the compact-crossover class, and it shows whenever you put your right foot to the floor. In normal driving it’s fine, but when rushing, there just isn’t much of a surge off the line, and passing takes patience despite the fact that the CVT kicks down fairly quickly to assist. Note, however, that the preview was located near Deadwood, South Dakota, which sits (according to Google) at an elevation of 4531 feet. Since you lose about 3% of your power for every 1000 feet of altitude due to there being less oxygen in the air (turbocharged engines are generally less affected), the little Subie was down about 13.6% in terms of power. We’ll undoubtedly find it more spritely when we test it at our headquarters near Chicago (which sits at about 600 feet), but it’s unlikely the richer air will turn it into a rocket.

As the Crosstrek is sort of a sporty entry that slots between two classes, its competitors are somewhat diverse. In size and concept, it’s probably most like the new Nissan Rogue Sport. But at the smaller end are vehicles such as the Mazda CX-3, Mini Countryman, and Mitsubishi Outlander Sport, while larger rivals include a host of entries in the huge compact-crossover segment, including the Ford Escape, Honda CR-V, Mazda CX-5, and Toyota RAV4. Advantages against the former group are greater passenger and cargo room and the Crosstrek’s 1500-lb. towing capacity (many subcompact crossovers list no towing capacity at all), while it scores points against its larger foes for maneuverability and fuel economy. (With the CVT, the Crosstrek is EPA-rated at 27 mpg city/33 highway/29 combined, which puts it at or near the top against AWD versions of its rivals.) But regardless of where you place it, the Crosstrek is a worthy adversary that settles out to be quite a value.

Unlike some “sport-themed” crossovers, the Crosstrek offers impressive ground clearance (Subaru says a best-in-class 8.7 inches) that along with its X-Mode features such as hill-descent control, make it equally at home on road or off.