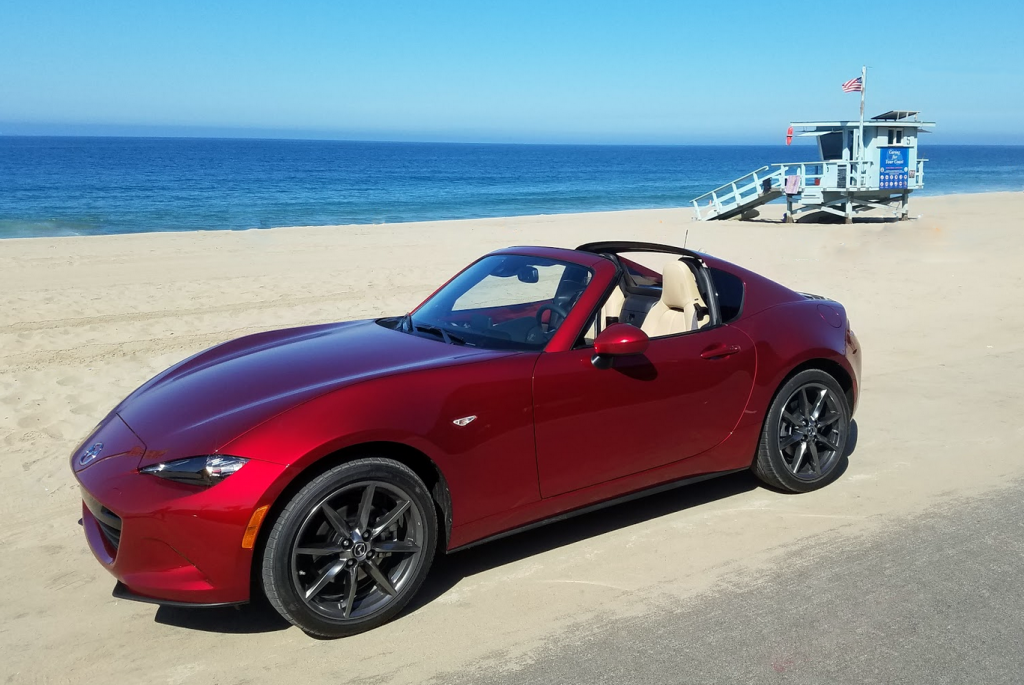 Yikes, where does the time go? The MX-5 Miata is fast closing in on its 30th birthday, but Mazda apparently couldn’t wait until the pearl-anniversary year of its beloved two-seat roadster to roll out a welcome round of enhancements. Ever since the first Miata debuted at the 1989 Chicago Auto Show as a 1990 model, Mazda has stayed wonderfully true to its original MX-5 concept: a front-engine, rear-wheel-drive, lightweight two-seat sports car with modest power, an easily removable roof, and a sporty-yet-compliant suspension.

Over the last 29 years, the Miata has remained an affordable fun machine that’s accessible and engaging for both expert and novice drivers. The current generation debuted for the 2016 model year, with the retractable-hardtop targa-roof RF model (for Retractable Fastback) following for 2017. For 2019—four years into the life span of the fourth-gen model—the Miata receives an excellent mid-cycle freshening. 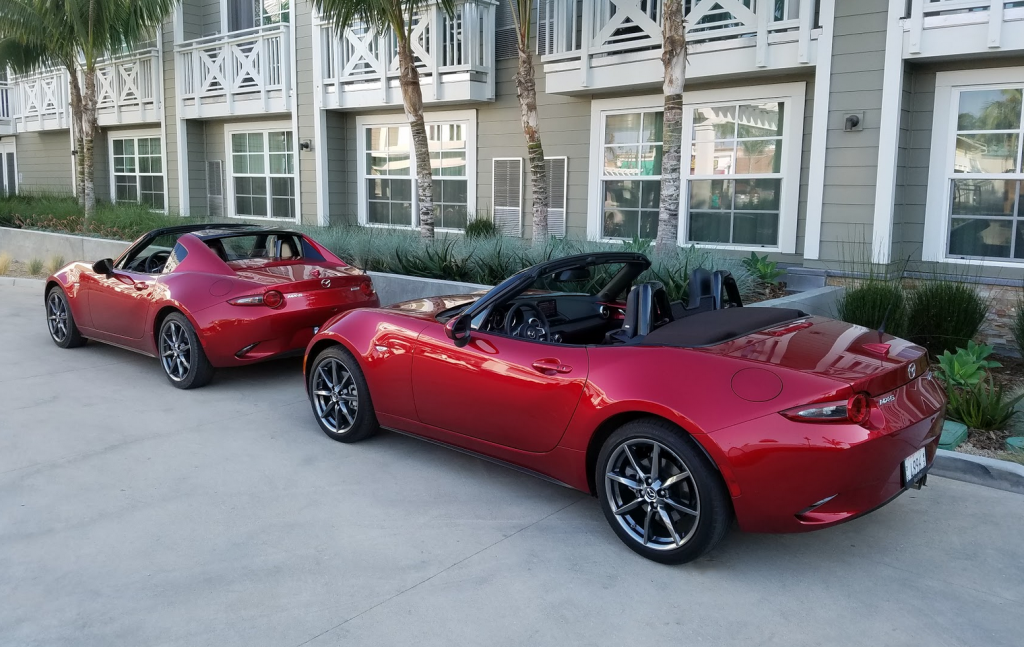 Twinsies. The Miata roadster (right) has a manual soft top that can raised or lowered in seconds with one hand. The RF (left) has fixed rear roof section, but the entire rear-roof panel powers up and back to make way for a power-retractable center-roof section, allowing for an open targa-style roof or a closed-coupe roof.

From the outside, the 2019 Miata really doesn’t look any different than its 2016-2018 predecessors, but there are a handful of internal improvements. The biggest one is under the hood, where the SKYACTIV-G 2.0-liter 4-cylinder engine has undergone a significant revamp. Among the enhancements are lighter, redesigned pistons and connecting rods; a stiffer crankshaft; increased throttle-body diameter; larger intake- and exhaust-port diameters with optimized port shapes; higher-flow exhaust manifold; and a shorter, multi-path intake manifold with larger-diameter runners. 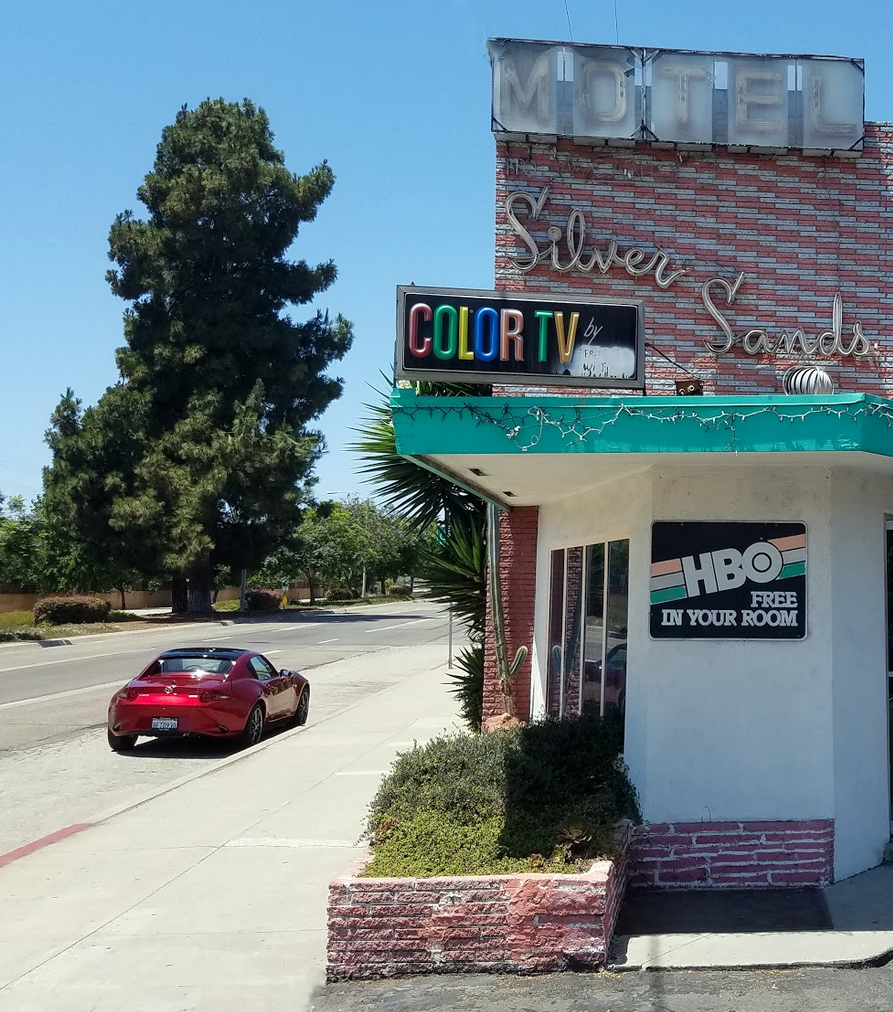 All of those tweaks add up to an increase of 26 horsepower and three pound-feet of torque over the 2016-’18 powerplant, with throttle response that’s a bit quicker and more linear throughout the rev range. Output is now 181 hp at 7000 rpm and 151 lb-ft of torque at 4000 rpm. If you really know your Miata specs, you’ll note that that peak horsepower number occurs at 200 rpm beyond the 2016-’18 Miata’s redline. That’s because the updates to the 2019 engine have made it a bit “revvier” than its predecessor—the redline has been bumped up to 7500 rpm from 6800 rpm.

Despite the 17-percent increase in horsepower, the EPA fuel-economy estimates hold steady at 26 mpg city /35 highway /29 combined with the 6-speed automatic transmission, and improve slightly to 26/34/29 with the 6-speed manual (a 1-mpg improvement over the 2018 highway number).

There are a few other powertrain revisions as well. The muffler’s internal structure was redone for an improved exhaust sound, the transmission gets a lightweight dual-mass flywheel, and the final drive ratio was shortened from 3.454 to 3.583 on automatic-transmission models.

Other enhancements include a standard aluminum tilt/telescopic steering column that replaces the previous steel tilt-only unit. The new telescopic feature doesn’t offer a particularly prodigious range of adjustment (30 mm, paired with 42 mm of tilt range), but every little bit helps when you’re in a cabin as cozy as the Miata’s. (Trust me on this; I’m 6’6”.) Another plus: the new telescopic column adds less than half a pound of weight over the previous unit, and Mazda took some stiffening countermeasures as well, so the new column feels as rigid as the one it replaces.

The basic Miata model lineup doesn’t really change; as before, the soft-top roadster is available in entry-level Sport, performance-focused Club, and top-line Grand Touring trim levels, while the RF comes in only Club or Grand Touring guise. 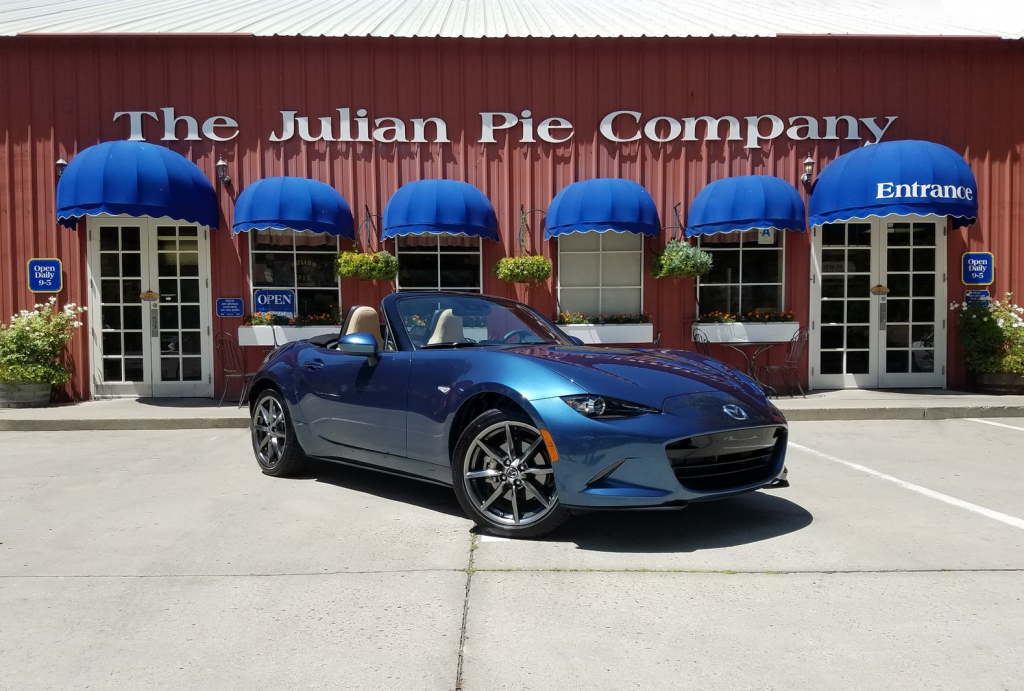 The Julian Pie Company in Santa Ysabel, CA. (We had a slice of the Caramel Dutch Apple–delicious.)

A rearview camera is now standard in all models, and two of Mazda’s i-ACTIVESENSE safety technologies are newly available: Traffic Sign Recognition and Smart City Brake Support (a low-speed automatic emergency braking system) are standard in Grand Touring models, and SCBS is available in Sport and Club models in i-ACTIVESENSE packages. 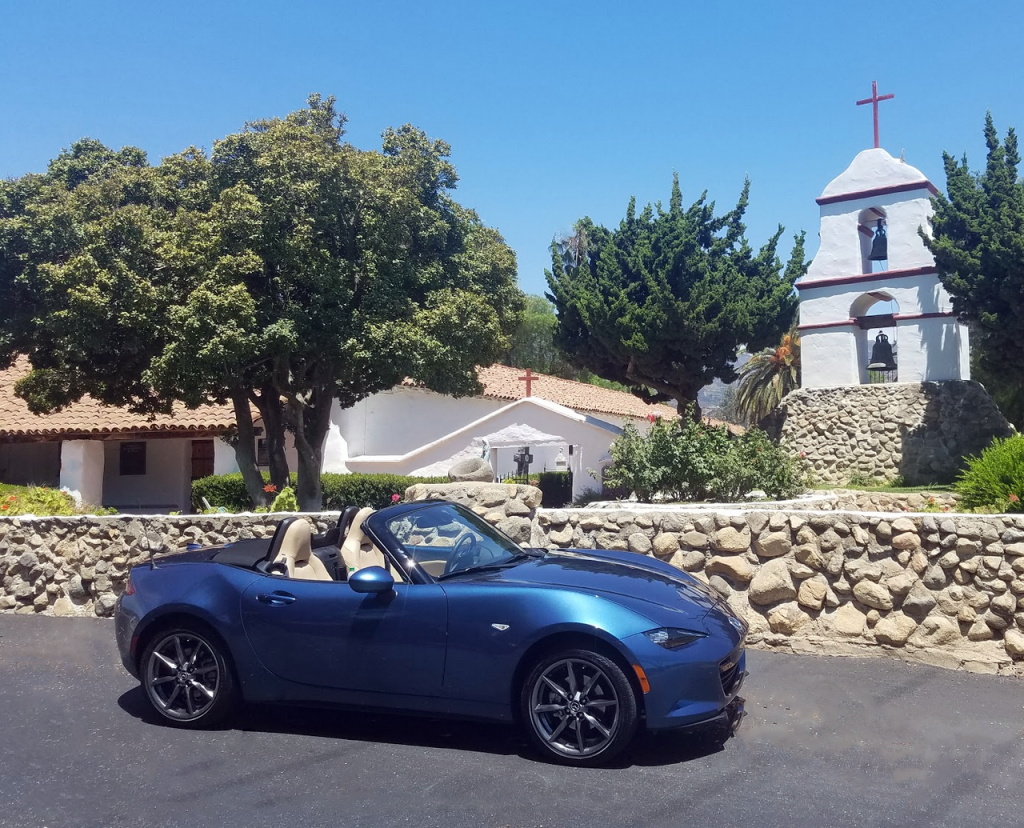 Minor trim updates include a black-metallic wheel finish on the Sport and Club models, and an available brown cloth top on Grand Touring models. The CD player has been deleted on all models, and the Grand Touring no longer offers an anti-theft alarm.

We put the 2019 Miata’s updates to the test over two full days of driving in Southern California. On the first day, we piloted a Grand Touring roadster (finished in Eternal Blue Mica) from downtown San Diego to Malibu, and on the second day we swapped into a RF Grand Touring in dazzling Soul Red Crystal Metallic and motored further north, from Malibu to Pismo Beach. 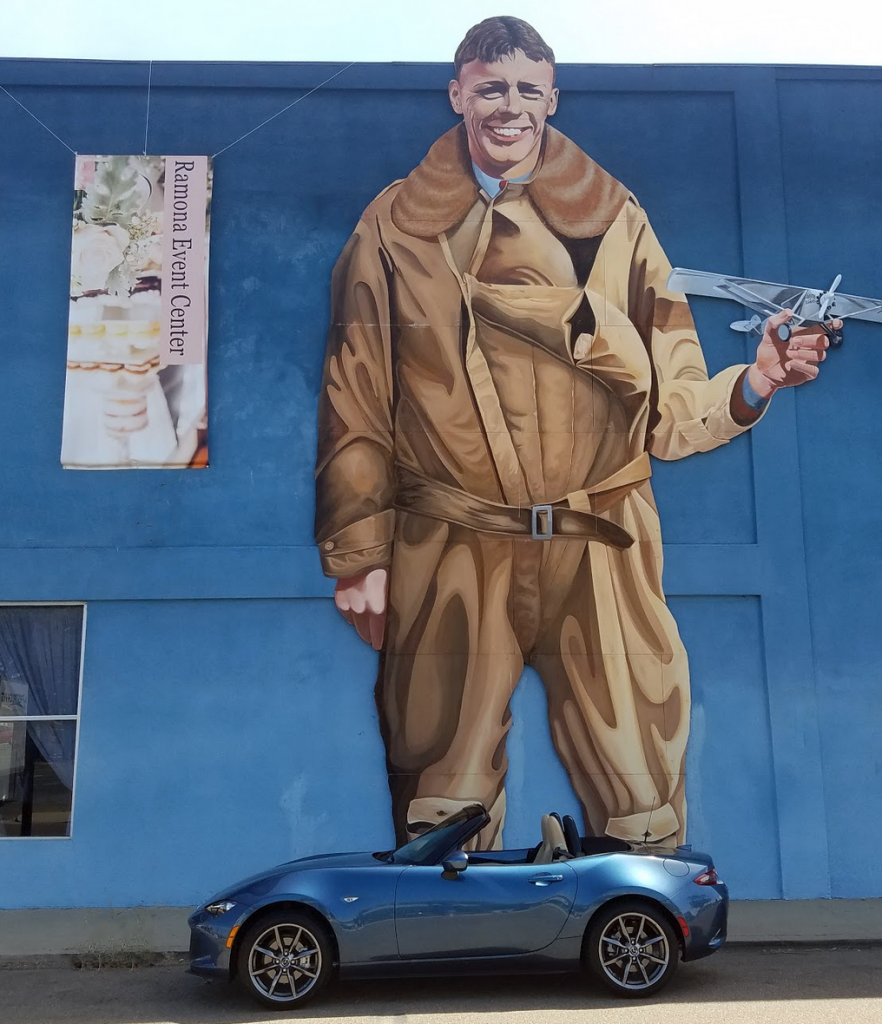 Though Mazda supplied us with a basic road map and input some key destinations into the vehicles’ navigation systems, we were on our own as far as drive routes went. Needless to say, an unstructured, find-your-own-way trek through Southern California’s gorgeous coastal highways and winding canyon roads is a delightful way to experience a Miata.

However, wherever your Miata road trip takes you, you’ll have to pack light. The Miata’s trunk can handle one airline-carry-on-sized suitcase, and maybe a medium duffel bag and a few odds and ends, but not much else. Likewise, there’s not much in the way of storage space in the passenger compartment; Mazda engineers prioritized an optimal driving position over creature comforts and small-items storage space. If, say, the ideal placement of the shifter interferes with a convenient location for the cup holders, then the shifter wins and the cup holders lose. So, the Miata’s cup holders are situated at the tail end of center console, parallel with the seat backs. This necessitates either torso contortions or an awkward, across-the-body stretch with your outboard hand (left for the driver, right for the passenger) to grab your drink. For a car that drives like the Miata, I can live with that.

In terms of occupant space, the cockpit is cozy at best. For extra-tall guys like me, the soft-top roadster is a more viable option than the retractable-hardtop RF. On our first drive day, the temperature had risen to nearly 100 degrees by mid-afternoon, so my drive partner and I agreed that it was time to put the top up and soak up some A/C and shade for a while.

In the roadster, there was just enough headroom under the soft top for my noggin, if I scrunched a bit. In the RF, the hardtop roof panel steals a precious extra inch or so of space—enough that driving or riding with the top up wasn’t really doable for me. So, we went top-down for the whole stretch on the second day, and I doubled down on the SPF 50.

Still, the Miata’s juice is worth the squeeze. A small, open-top sports car puts its occupants into the surrounding environment in a way a larger, closed vehicle can’t, which is great when there’s a lot of beautiful environment around to enjoy. We motored through winding desert highways, checked out a 200-year-old mission in the town of Pala, puttered along a beachfront road in Malibu, poked around some dingy-but-charming roadside motels in Ventura, and felt the cool ocean breeze as we cruised up Pacific Coast Highway. 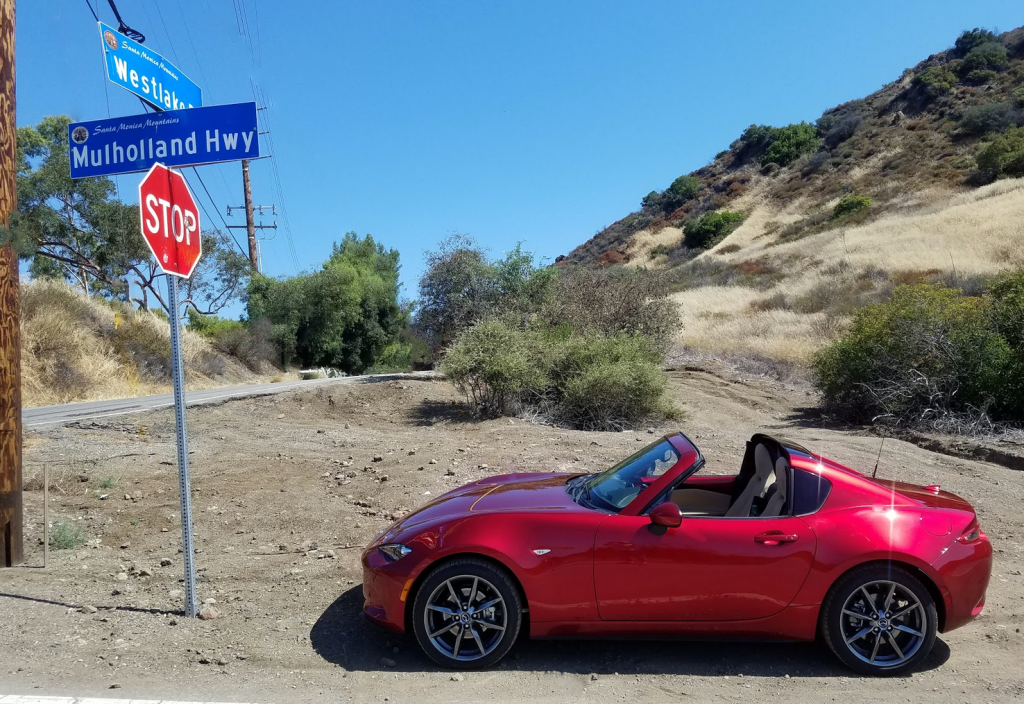 We also made sure to hit Mulholland Highway, a scenic two-lane road that snakes east-west through the Santa Monica Mountains. With its meandering, varying radius turns and elevation changes, Mulholland is the kind of road that Miatas are made for… where the light curb weight, 50:50 weight distribution, and carefully tuned suspension pay huge dividends. 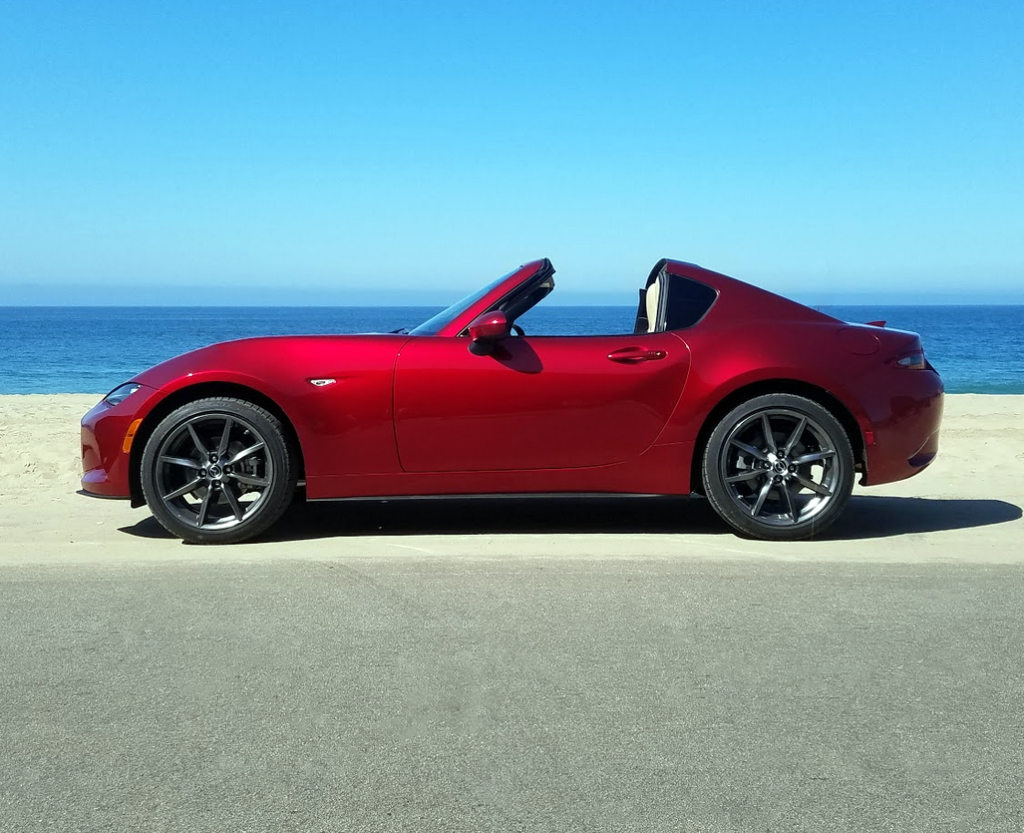 Mazda’s Soul Red Crystal Metallic paint is an extra-cost option; it comes as close to a genuine custom candy-apple-red finish as any factory color we’ve seen.

Despite its new additions, the 2019 Miata hasn’t put on much weight; it’s about 7 pounds heavier than last year’s model. (I could compensate for that if I laid off of the burgers for a while.) Similarly, despite all its retractable-hardtop apparatus, the RF weighs just 115 pounds more than the soft top. Mazda engineers hew to a “Gram Strategy” philosophy to shave even minuscule amounts of weight wherever feasible.

The Miata is obviously to set up to be a nimble, sporty handling car, but not at the expense of a decently comfortable ride in everyday driving. If you ever find yourself behind a Miata that’s hustling through a fast corner, take note of how much the car leans in the turn. Some reviewers count this as a detriment, but it’s one of my favorite things about the MX-5. Many performance cars have stiff suspensions that enable flat cornering, but the tradeoff is a brittle, occasionally jarring ride. The Miata’s suspension is surprisingly compliant for a sports car; in addition to a better ride over bumps and rough pavement, that progressive, predictable body roll in fast corners provides good seat-of-the-pants feedback about what’s going on with the car. It’s talking to you, man!

Our Miata RF was wonderfully balanced as we tossed it into the corners on Mulholland. Unless you’re being really reckless or careless, 181 horsepower isn’t enough to get you into serious trouble on a winding mountain road, and extracting the maximum amount of acceleration from the powertrain is part of the fun. There are plenty of sports cars that are faster than a Miata (most of them, in fact), but the open-air cockpit, low-to-the-ground seating position, and agile handling make the Miata feel faster than it is.

The horsepower infusion for 2019 helps as well. The torque curve feels meatier, and acceleration is a bit snappier all-around. Both of our test vehicles were manuals; in highway cruising, we found that there was enough “go” on tap in fifth gear that downshifting to fourth for extra passing power usually wasn’t necessary. Plus, the revamped, freer-breathing muffler gives the exhaust note a satisfyingly throatier sound.

The price bump seems reasonable to us for the extra power and new features, but we wouldn’t have minded if Mazda saw fit to include a couple subtle styling updates as well. The Miata is soon to enter its 30s, but driving one still makes you feel like you’re 16. 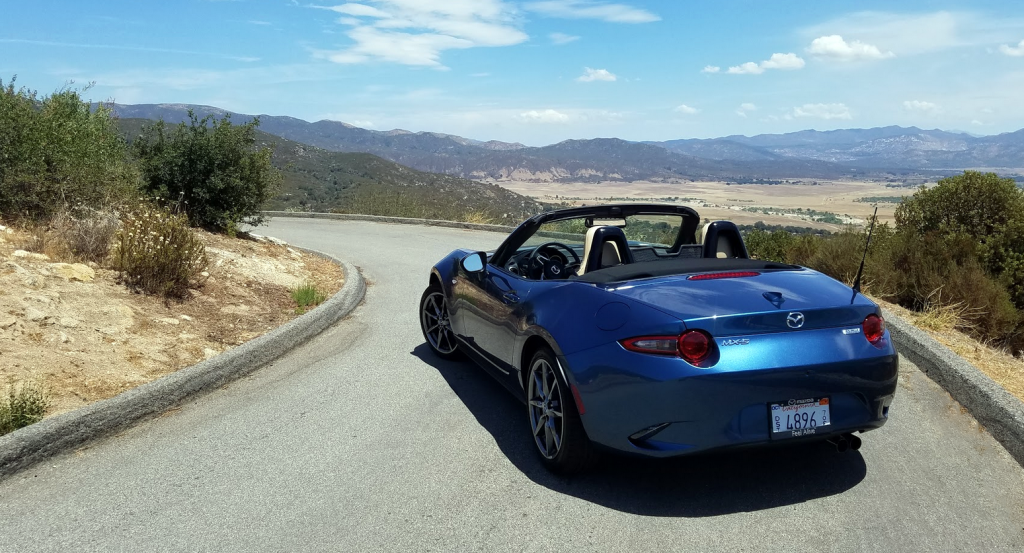