Most Americans have never heard of the Firefly, but Canadian consumers might well have considered purchasing one of these subcompact Pontiacs. A 1987 “Base” is shown.

Pontiac of Canada was well known for selling gently tweaked variations of Chevy products for exclusive distribution north of the border. The 1976-1987 Pontiac Acadian for example, was actually a retrimmed Chevrolet Chevette.

But for a period of time, the Canadian arm of Pontiac also sold a uniquely trimmed variant of a Suzuki product, most memorable perhaps for its catchy model name. The Pontiac Firefly, available from 1985-1991, then again from 1994-2001, was one of the many vehicles spun off of Suzuki’s Cultus subcompact architecture.

Though Americans never saw the Cultus, we did see variants, including the Chevrolet/Geo Metro, and the Suzuki Swift.

From 1985 until 1989, Cultus-based products sold in North America were sourced from a Suzuki facility in Japan. Beginning in 1990, the small cars were assembled by Canadian Automotive Manufacturing, Inc. (CAMI), a General Motors/Suzuki joint venture located in Ingersoll, Ontario.

Established in 1986, CAMI supplied vehicles to both Canada and the U.S., and occasionally overseas market including the Middle East.

Answering Canadian Pontiac dealers’ call for a vehicle to slot below the compact Sunbird Sunbird, GM offered up the Firefly, a very lightly retrimmed version of the Chevrolet Sprint. It’s worth noting that the Sprint could be had in the U.S. and Canada.

What was the Pontiac Firefly?

The first generation Firefly was offered in 3-door, 5-door, and convertible body styles, of latter of which didn’t come online until 1989.

Firefly was initially offered in Base, FE (fuel economy), and higher-content LE trim levels. The only engine available at launch was a 55-horsepower 1.0-liter 3-cylinder mated to either a 5-speed manual transmission, or a 3-speed automatic. As every Firefly came in well under 2000 pounds, the 3-cylinder engine was able to move the Firefly with reasonable authority, nonetheless, a 1.3-liter 4-cylinder became available for 1989.

Rare and the object of enthusiast interest, was the Firefly Turbo. Powered by a 70-horsepower turbocharged version of the 3-cylinder engine, the Turbo could be had only as a 3-door, and only with the 5-speed manual. 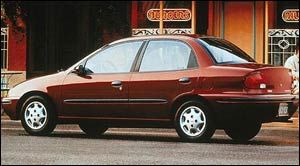 After a two-year hiatus, the Firefly returned to Canadian Pontiac stores, having laid low while GM sorted out the arguments for and against bringing the Geo brand to Canada—GM chose not to.

The big news for 1994 was the addition of a sedan to the Firefly lineup. Otherwise, things were mostly as they had been, though the turbocharged 3-cylinder engine as discontinued.

The Firefly was replaced for 2002 by a retrimmed version of the Daewoo-built Chevrolet Aveo named Wave, and was, like the Firefly, unique to the Canadian market.

As for CAMI, General Motors took full control of the factory in 2009, this After Suzuki retreated from the North American marketplace. The factory currently produces the Chevrolet Equinox.