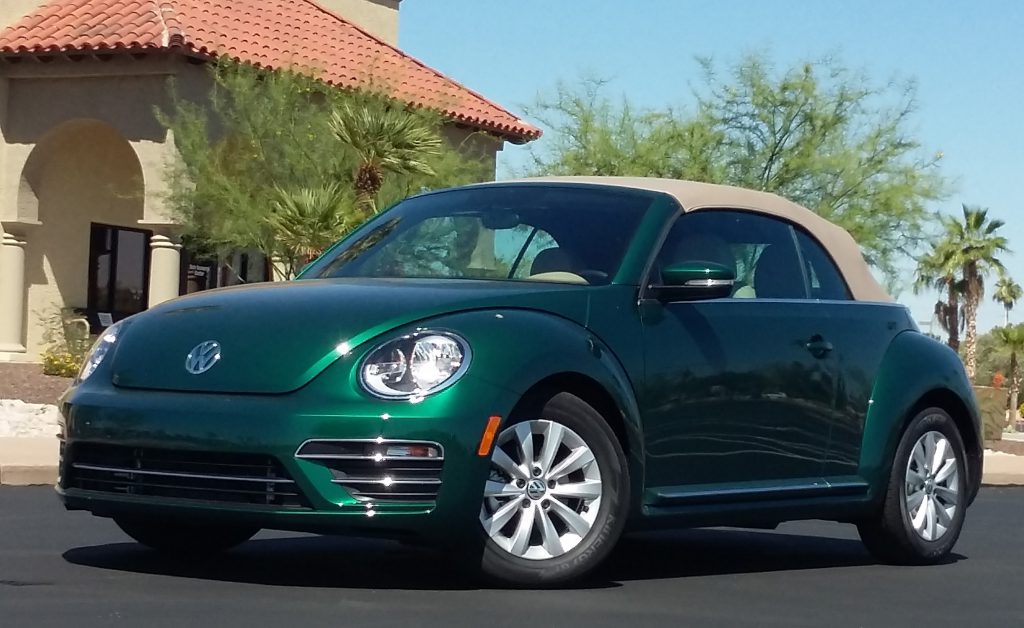 Options on test vehicle:  None

The great: Unique character, both inside and out; control layout

The good: Powertrain performance, good passenger room for the class

The not so good: Trunk space, rear-seat legroom

Volkswagen’s Beetle is one of the few small cars that can truly be said to have “charisma.” And that goes double when the top can be dropped.

Even in closed form, the last Beetle we drove — a 2018 Dune — exhibited an impressive number of neat touches, many being of a surprisingly practical nature. And most of those carry over to the convertible tested, so please see that report for the details. 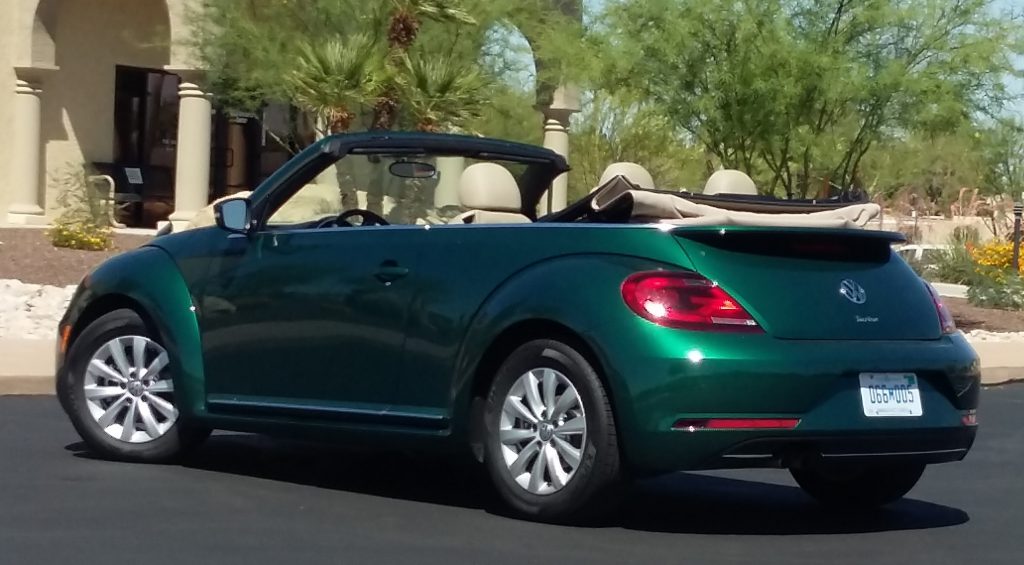 Even this base-model Beetle Convertible presents as being decidedly upscale. The car feels very solid for a drop-top — exhibiting little of the usual convertible cowl shake over bumps — and the top, in particular, impresses as being made of quality materials.

But several elements of the convertible are worth noting, even if they overlap a bit with those mentioned about the coupe.

Powering the tested drop-top was Volkswagen’s turbocharged 2.0-liter four linked to a 6-speed automatic transmission. The combination provides a stronger off-the-line jump and quicker throttle response than do most cars with small turbocharged engines (thanks in part to the transmission’s prompt kickdowns), a real plus. However, gear changes are a bit more pronounced than in most cars — sometimes even a touch “jerky” — but overall, it’s a plenty-potent powertrain that adds to the car’s sporting feel.

Road manners are likewise sporting, yet the ride is quite compliant. Often, convertibles suffer a fair amount of body flex and cowl shake over bumps, but the Beetle comes off as being very solid. It was also surprisingly quiet top-up on the highway, and — at least in the front seat — fairly composed with the top down. 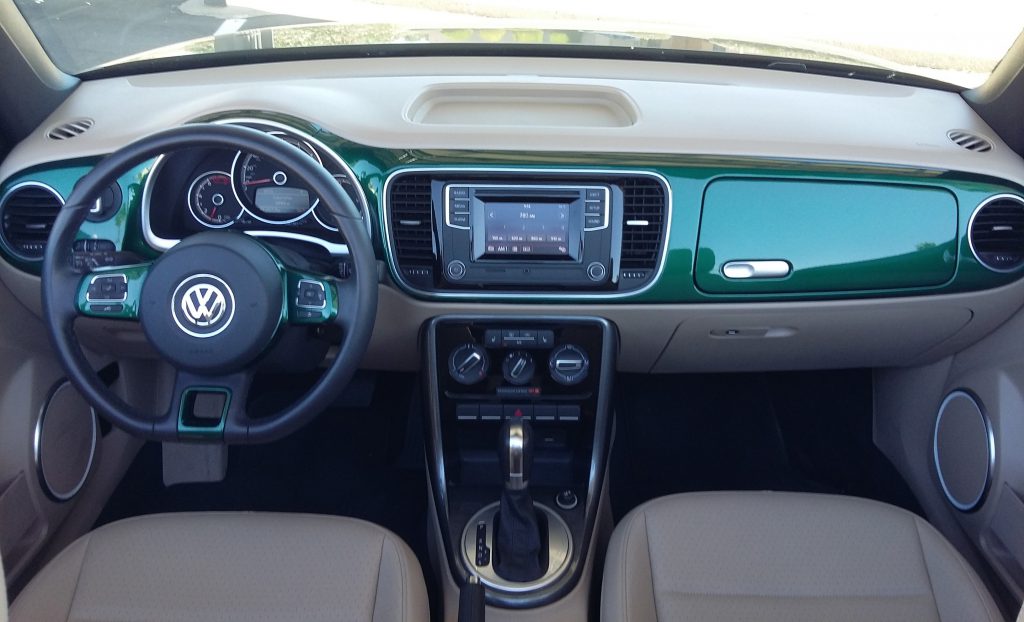 The interior is trimmed with many padded surfaces and neat body-colored panels on the dash face and door tops. In VW tradition, audio and climate controls are very easy to reach and use, and though none are large, there are numerous handy storage bins.

Visibility can be a bit of an issue. It’s fine to the left front and sides, but the angle of the right-front roof pillar obstructs some to that angle, and the wide rear corners of the top block a lot to the rear corners — unless the top is down, in which … no problemo. Also, when swung to the side, the sun visor doesn’t extend, leaving much of the window uncovered.

But those are about the only complaints on the interior, at least from a driver’s perspective. There’s plenty of headroom and legroom up front, the materials are first-rate, and VW’s audio and climate controls are among the best in the business. Only cabin storage space might come under scrutiny, as there are numerous handy cubbies — including upper and lower gloveboxes, a forward-console bin near 12-volt and USB plugs, and a left-side dash bin — but none are very large. 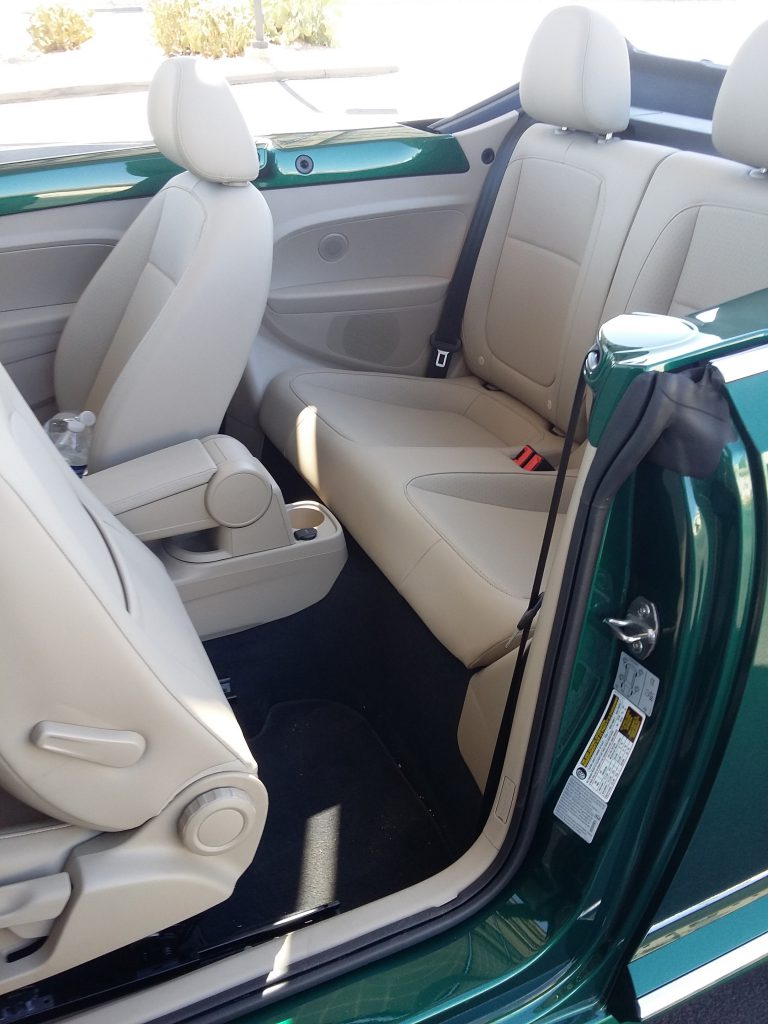 Sliding the front seat forward reveals a gaping opening to the rear seat, which has decent room for adults — at least if the seat ahead isn’t pushed far back. But only two can be accommodated, and the seat back is a bit too upright for best comfort.

Things aren’t quite as great in back. Two-doors aren’t known for their ease of entry/exit to the rear seat, but even top up, there’s a good-size portal to climb through, so the Beetle is better than most in this regard — and better still if the top is down. But once back there (only two will fit), the seat back sits at a bit of an upright angle, and though headroom is sufficient even for 6-footers, legroom gets very tight if the seat ahead is pushed far back — though it’s sufficient for two normal-size adults to sit in tandem. And top-down, it can get breezy back there.

Also limited is trunk space. The Beetle coupe is a hatchback with its attendant benefits in cargo space, but the convertible has a conventional trunk — and a small one at that. Furthermore, the body slopes down at the rear, limiting the ability to load boxy items. And though the rear seat backs fold to expand the area, the hole revealed is very restricted in size, and the seat backs rest about five inches above the level of the cargo floor, so items can’t easily be slid forward through the opening.

One other note here, which is hopefully of a very personal nature — and by that I mean that nobody else will be stupid enough to do it. At least, not after this ….

In all my years of driving (and no, I’m not going to tell you how many that is … but it’s a bunch), I don’t think I’ve ever locked myself out of a car. Until now. Part of this was my own fault, of course — I broke my own iron-clad rule of never setting the keys down inside the trunk when I take something in or out — but even that wouldn’t normally have been quite the problem it quickly became. And by “quickly,” I mean … in about 30 seconds.

On most modern cars with remote entry, after unlocking the car with the button on the remote, the locks will automatically re-lock if you don’t open a door within 30 seconds — sort of a safety in case you hit the button accidentally. And as you might suspect, that’s the prelude to this disaster.

After attending a friend’s wedding in Phoenix, I wanted to show my niece and her husband-to-be some bubble machines I had in the trunk (long story). Anyway, I hit the unlock button on the remote twice — so that it would unlock both doors and the trunk — opened the trunk lid, and set the keys down inside to pull out a couple of the bubble machines. But the car didn’t consider the trunk lid to be a door, so all the locks automatically re-locked — even though the trunk lid was open — after 30 seconds. So when I closed the trunk lid ….

But this gets better. (Or worse, depending on whether you’re the “tell-ee” or the “tell-er.”)

Calls to an independent locksmith, the VW roadside assistance number, and a VW dealer all resulted in exactly what the guy from AAA — who drove out to meet us in the parking lot — told me: that no key or duplicate remote could be made (and a key wouldn’t have worked anyway, as there’s not even a keyhole on the door handle), and that the only way to get inside the car was to use a method that could result in two broken windows — and a costly and time-consuming repair. Please sign this waiver …. 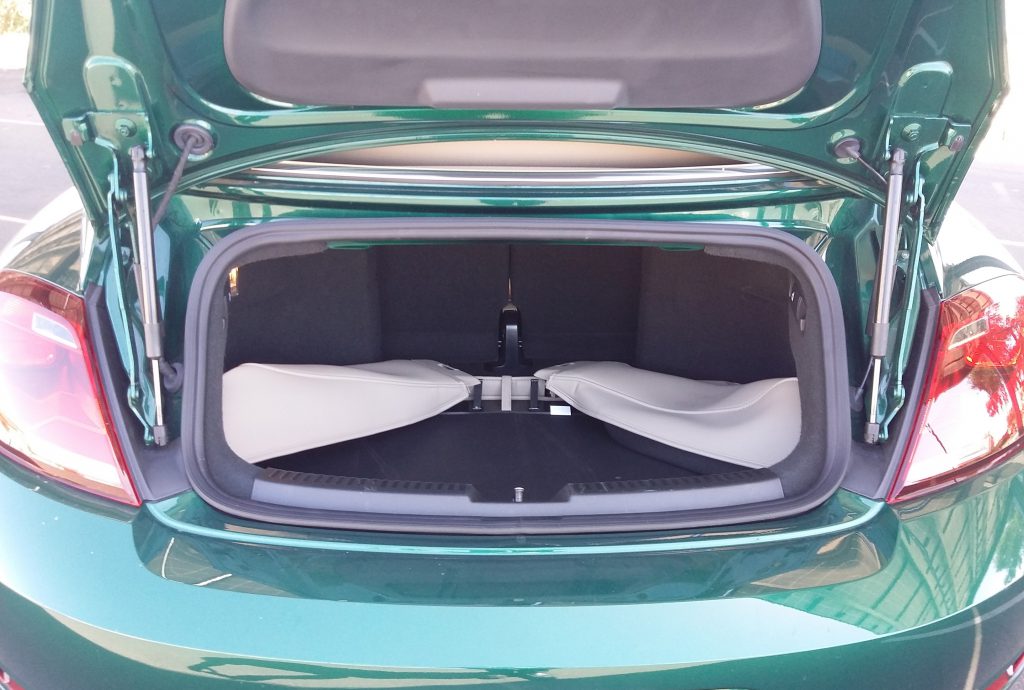 The trunk is small but usable; note the “expensive” strut-type lid hinges. The dark area against the rear wall is the opening revealed when the seat backs are lowered. Not only is the passage narrow, but the seat backs lie five inches above the level of the cargo floor, so it’s tough to slide even items that fit through the opening.

Fortunately, I was able to get ahold of the local transport company that handles VWs in the area (it was a Saturday afternoon), and we made arrangements to meet to get the spare key. This took a lot of time and trouble — on our end and theirs — but it turned out to be the only solution. Why? Because even if AAA was able to open a door — broken glass or not — we still wouldn’t have been able to open the trunk, as we found out later that there’s no trunk release inside the car (so that it can be left top-down in a parking lot, I suppose), nor are the releases for the rear seat backs in the interior (they’re in the trunk … and for the same reason). It’s possible the “lock-out” portion of this story could happen in many cars, so learn from my mistake.

The next day, four of us enjoyed an evening top-down ride, and all was forgotten. It reminded me of why people buy convertibles in the first place, and it added greatly to the Beetle’s already-bubbly charisma. 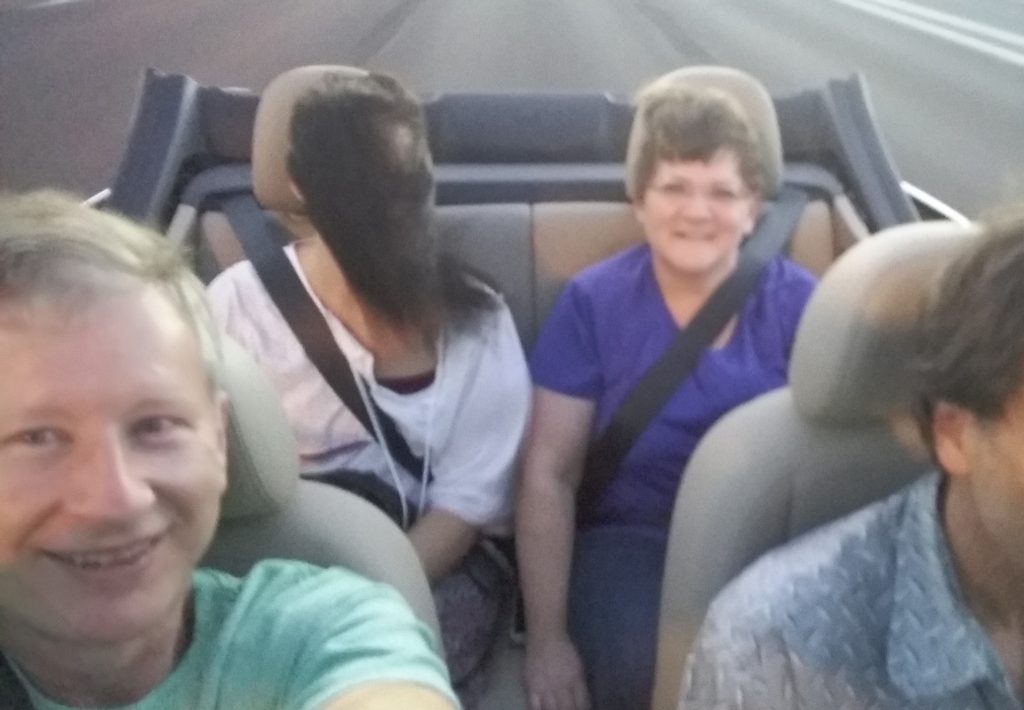 Friend Bob kindly took this top-down photo during our evening cruise in Phoenix. Doubt he meant to catch his sister-in-law behind him in a “bad hair day” moment (this is why they make rubber bands, Joy), but at least his wife Karen remains rather nicely coifed. Needless to say, while quite serene in front, it sure can get breezy in back.