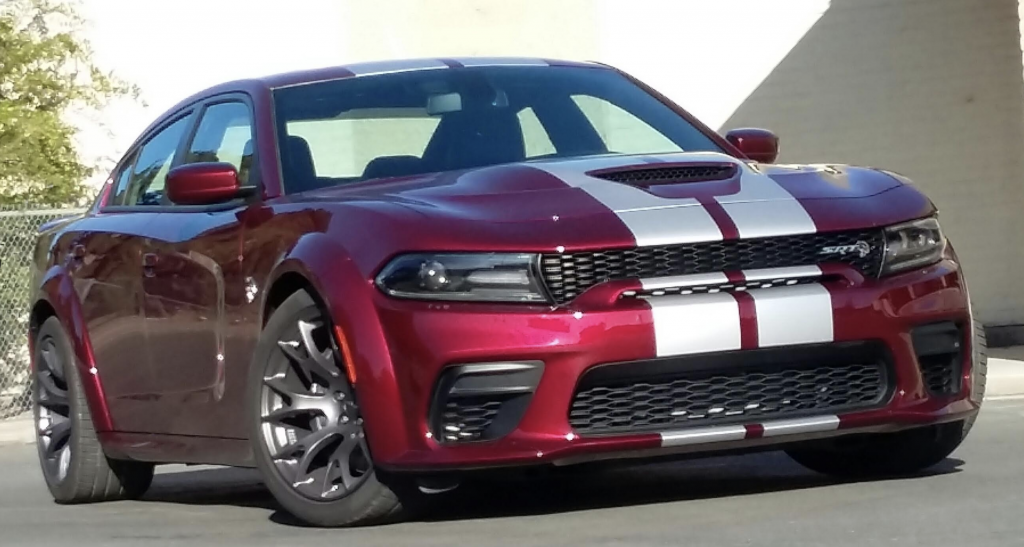 Even in this new age of muscle cars, it’s still surprising that one of the quickest and fastest of them is a 4-door sedan. And that the 4-door sedan in question costs just $70,000.

But that’s the story behind the Dodge Charger SRT Hellcat. 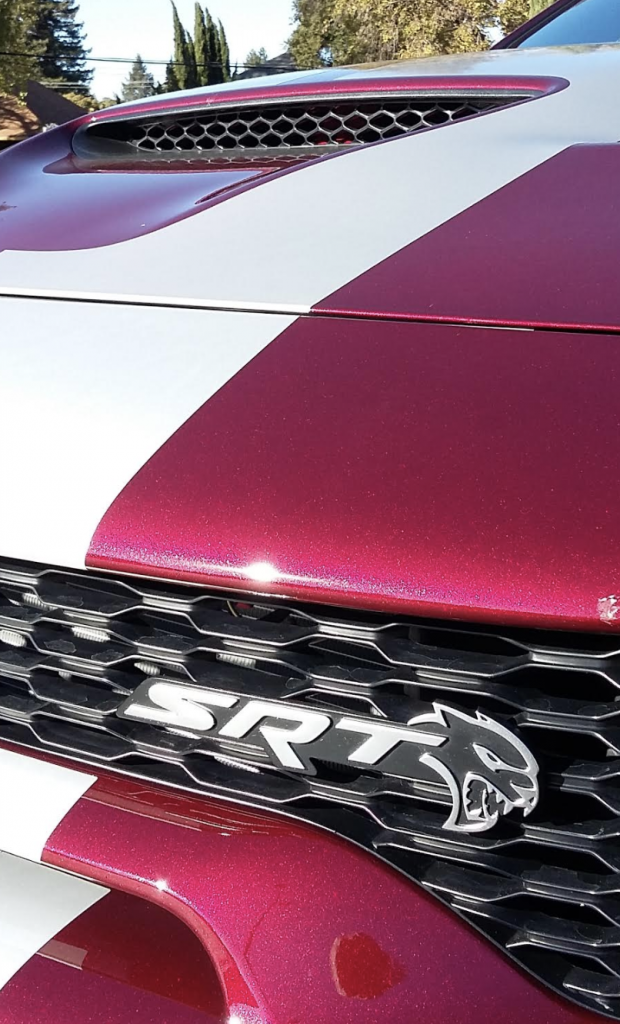 The SRT Hellcat and Scat Pack versions of the Charger look very similar … until you spot the badging.

But that hardly diminishes the appeal of the Dodge Charger SRT Hellcat, which the company bills as “The fastest, most powerful mass-produced sedan in the world.”

Of course, the qualifier here is “mass-produced,” and an electric-powered Tesla may be quicker, but certainly the SRT Hellcat is among the roomiest rockets you can get for anywhere near its price.

What changes for 2020 is that the Charger SRT Hellcat adopts as standard the Widebody Package introduced on its Challenger sibling last year. This brings fender flares that add 3.5 inches to overall width, which allow for fitment of wider 20-x-11-inch wheels shod with meaty 305-series tires. Also along for the ride is a Bilstein 3-mode electronically damped suspension, the combination bringing better grip in a straight line, during braking, and in corners. In fact, Dodge claims the Widebody version of the car is slightly quicker 0-60, can stop four feet shorter from 60 mph, and can circle a 2.1-mile road course 2.1 seconds faster, which equates to 13 car lengths per lap. For those who care (and you probably wouldn’t have read this far if you didn’t), 0-60 now comes up in 3.6 seconds, the quarter-mile in 10.96 seconds, 60-0 braking consumes just 107 feet, and the car can pull .96 Gs on the skidpad. Only top speed is down a bit due to increased wind resistance of the flares and rolling resistance of the tires, now standing at “just” 196 mph (from 198).

So high are these capabilities that they’re almost a waste on the street. So the company makes a more “practical” hot rod available in the form of the Dodge Charger Scat Pack.

A Scat Pack in subtle colors makes for a rather ubiquitous-seeming sedan … until you hit the loud pedal. The Widebody — which adds fender flares covering wider tires and an adjustable suspension — is standard on the SRT Hellcat for 2020, but a $6000 option for the Scat Pack.

Scat Packs come with their own special badges, but even these don’t really scream.

Fitted with a naturally aspirated 6.4-liter Hemi putting out 485 horsepower, the Scat Pack puts down about as much power as you can reasonably use – and certainly more than you reasonably need. And for 2020, it adds the availability of the Widebody Package, which adds the same features found on its Hellcat brother. Also new is available caramel-colored upholstery that brightens the passenger compartment. (Available brown leather does the same.) 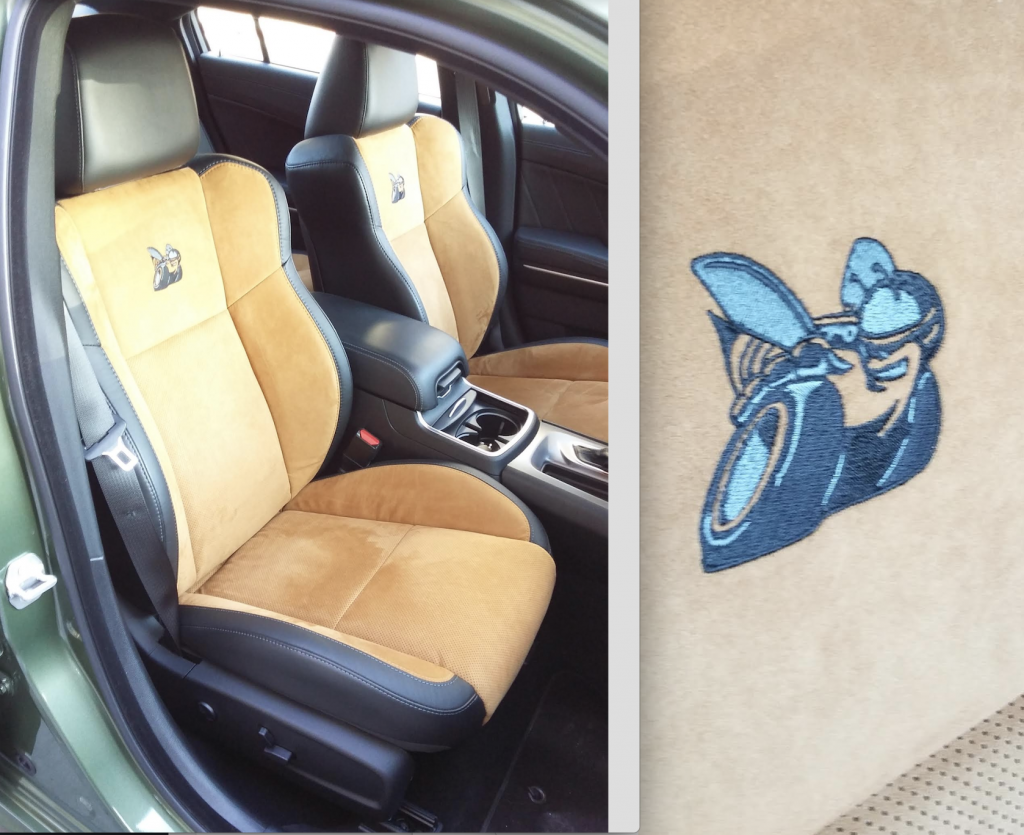 If an all-black interior strikes you as drab, rejoice! New for 2020 is this caramel-colored suede-like upholstery that really brightens the interior.

Best of all, the base Scat Pack starts at just a hair over $40,000 including destination, with the Widebody Package adding another $6000. As on the Hellcat, the increased grip offered brings higher cornering limits along with reductions in 0-60 time, ¼-mile time, braking distances, and lap times, with the pertinent numbers being .98 Gs on the skidpad, 0-60 in 4.3 seconds, the 1/4-mile in 12.4 seconds, 60-0 braking in 107 feet, and 1.3 seconds (eight car lengths) faster on a 2.1-mile track.

We had a chance to drive both Widebodys on the street and on the track – the latter being the famed Sonoma Raceway in northern California. But since most of these cars will never see a track – which is kind of a shame – we’ll focus here on the street drive.

Sonoma Raceway has lots of corners and little in the way of straights (at least the way it was coned off for us), which takes a lot of concentration and limits top speeds — probably a good thing with this kind of power on tap. It also demonstrated how capable these big cars are in terms of handling and braking, which are superb.

There are two areas that really stand out here, and they might not be what you think.

The first is throttle response. Certainly power has something to do with this, but it’s really a function of how quickly the transmission downshifts after prodding the throttle from speed. And the TorqueFlite 8-speed downshifts as quickly as any automatic out there; only an electric vehicle might be quicker, and even then, certainly not by much. And after the downshift, strong power comes on instantly thanks to big engines making big torque – without the wait for revs to build or a turbo to spool up.

But just as satisfying is the sound.

To some, they’re exhaust pipes; to others, they’re speakers. And for those folks, these Dodges produce some beautiful music.

While the Scat Pack cruises fairly quietly, any dip into the throttle results in a deep, rumbling roar that just screams “power.” It’s enough to send a chill up the spine of those who remember the original muscle cars. The Hellcat is much the same, though there’s a faint exhaust noise at cruise accompanied by a bit of supercharger whine, both growing appreciably (and gloriously) louder under throttle. And with either, speed builds much more quickly than you probably intended.

Another difference between the two had to do with ride quality. While both Widebodys have a similar 3-mode, electronically adjustable suspension offering Auto (Street), Sport, Track, and Custom settings, the Hellcat seemed to ride a bit more stiffly, at least in Auto – which is probably what you’d usually use. In both, things get predictably firmer in Sport and Track, which also run the transmission a gear or two lower at any given speed.

For those in a real hurry, both models also offer Line Lock and Launch Control. The former locks only the front brakes when you press on the pedal, allowing the rears to spin freely when you hit the gas. Ostensibly, the purpose is to clean off and heat up the rear tires for better traction on take-off – creating lots of smoke in the process – but ….

Launch control balances engine power with available traction to get the quickest movement off the line possible, which usually requires a moderate amount of wheel spin. This differs from normal traction control, which keeps tight rein on wheel spin to maintain control in slippery conditions. 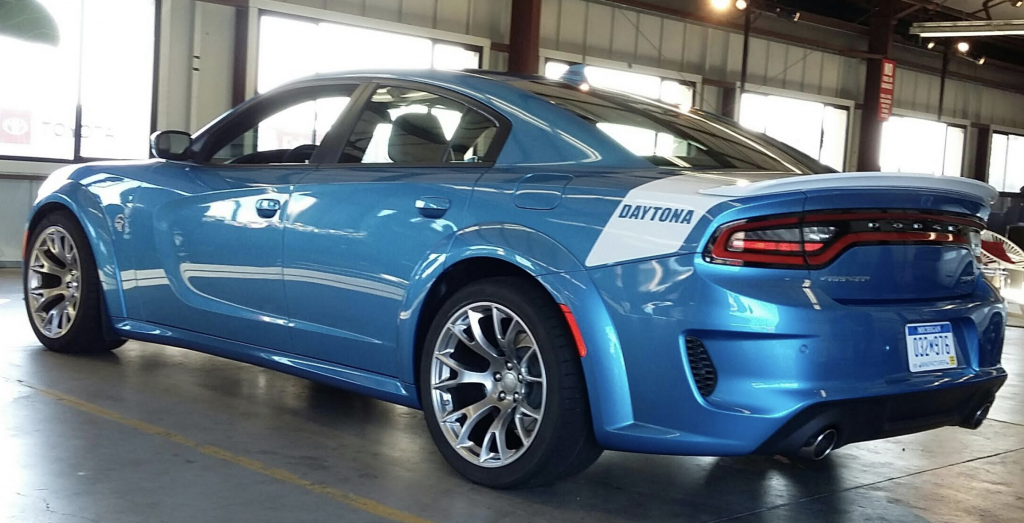 2020 Dodge Charger SRT Hellcat in Daytona 50th Anniversary Edition livery and exclusive B5 Blue paint. Three other colors are offered, and only 501 are scheduled to be produced.

What will assuredly be another of Dodge’s “one-year wonders” is a limited-production version of the Charger SRT Hellcat called the Daytona 50th Anniversary Edition. Celebrating the droop-snoot, high-winged Charger Daytonas that tore up NASCAR tracks 50 years ago, it gets a 717-hp version of the Hellcat’s supercharged Hemi (+10 hp) along with special rear-body striping. It’s available in four colors: B5 Blue — exclusive to the Daytona — Pitch Black, Triple Nickel, and White Knuckle. Only 501 examples will be built (just like street versions of the original), with prices starting at $74,140 … if you can get one.

While all these Chargers can be put on order this fall, they probably won’t be in dealerships until early in the 2020 calendar year.

Aside from their sheer speed potential, what’s most impressive is the practicality these cars offer. They are true full-size 4-door sedans that will seat five, rear-seaters getting good room and easy access. Trunks are spacious, and in front, there are a number of handy storage cubbies including a large glovebox, something that really helps in everyday use. All of which makes these big haulers great family four-doors for the perennially late ….

Don’t let its “family sedan” profile fool you; even the tamer 485-horsepower Scat Pack is a brutally quick and capable performer … its 707-hp SRT Hellcat brother even more so.