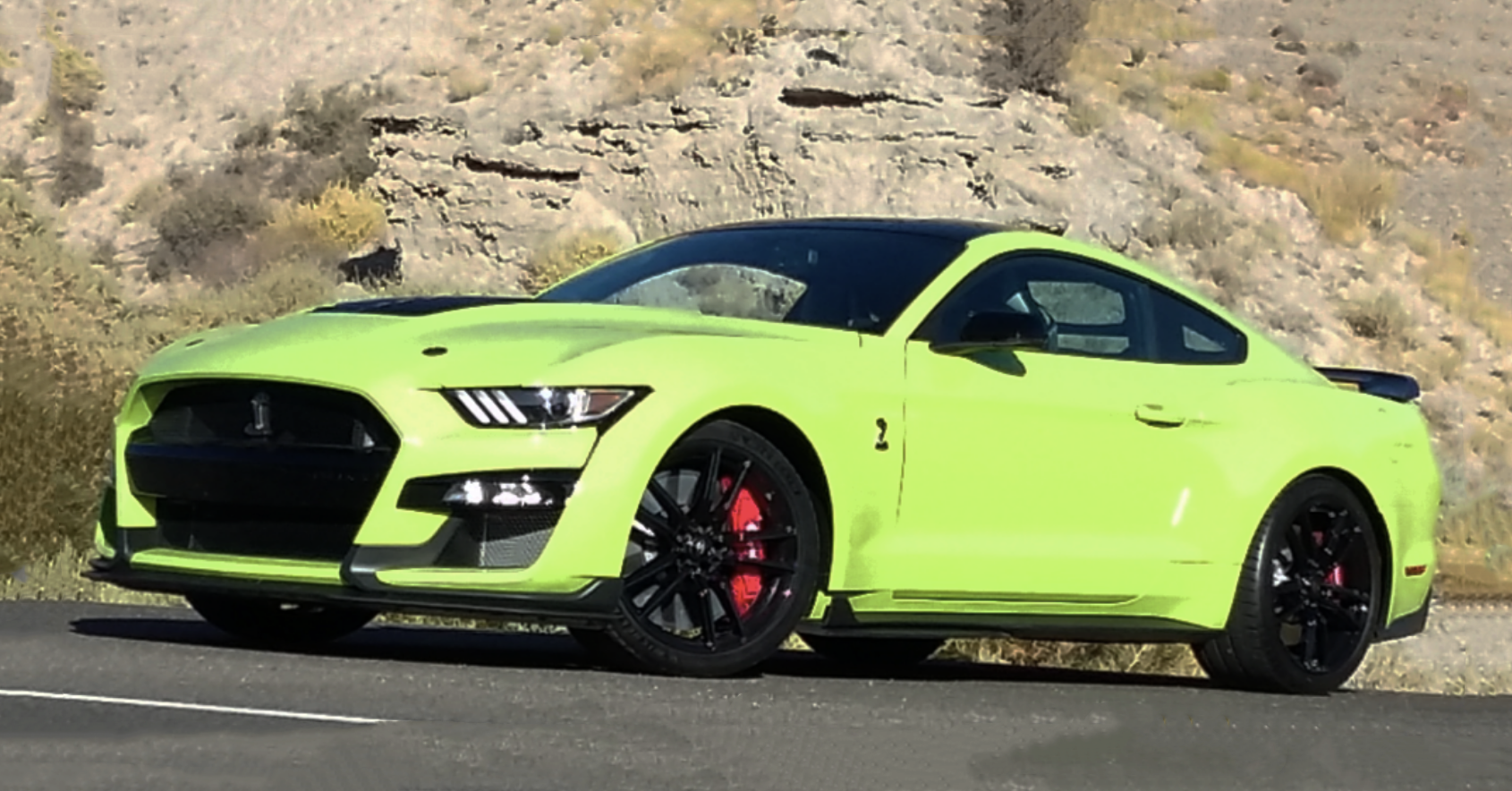 Just how many ponies does a pony car need? Well, certainly not 760 ….

That will undoubtedly raise the eyebrows of my fellow enthusiasts, to whom “too much power” is a phrase bordering on blasphemy. But honestly, it’s really hard to make use of that much power on the street … at least, for very long.

Although it may seem wisest to “fly under the radar” with a car boasting this kind of power, Ford offers the GT500 in some colors that do anything but.

As it turns out, the heralded “horsepower race” of the ’50s, ’60s, and early ’70s was really more of a soapbox derby. At its peak, the top players had something around 400 horses, and nobody – at least officially – had 500. And keep in mind that was gross horsepower, not the lower net ratings (which took into account “as installed” accessories, exhaust systems, and intakes – all power sappers) that were adopted in the early ‘70s. Some ads of the day listed both, with the net ratings being about 20 percent lower.

Fast forward 50 years. Some of the players are the same, but the ante is higher: “something around 400 horses” is just the starting point. The contestants are now mostly pony cars carrying familiar monikers: Chevrolet Camaro, Dodge Challenger, Ford Mustang. And as in the first horsepower heyday, the last forms the basis for a ringer. 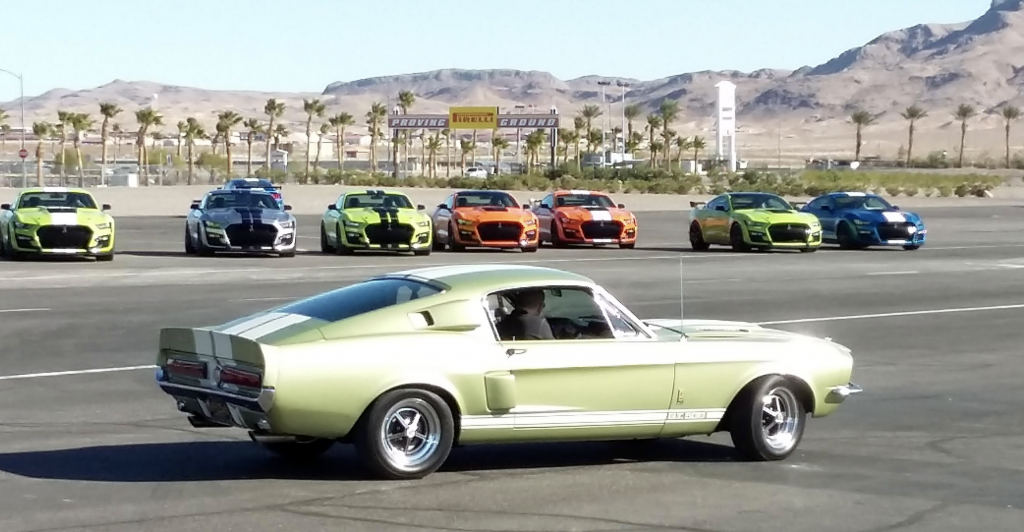 In a tip of the hat to the Shelby heritage, Ford brought along a 1967 Shelby GT500 for perspective … and we got to drive it. While a solid performer in its day, it helped demonstrate how far technology has come.

Back in the day, a chicken farmer turned race driver turned car builder named Carroll Shelby got his hands on some Mustangs, breathed on them a little, and sold the result under his own name. These were fast in both a straight line and in corners — the latter being somewhat rare for the time — and today, they’re valued collectibles. The original run of Shelby Mustangs ended in 1970, with a small number of ’70 models that were actually ’69 cars with new serial numbers.

Hard to see here — and subtle in any case — are the markings that label this car a Shelby GT500. At left, there’s “SHELBY” imprinted on the lower front valance (just under the dual stripes) and “GT500” at top right on the grille crossbar. A Shelby snake logo sits behind the front wheel — with another in back between the taillights — and logos inside are found on the steering-wheel hub and numbered dash plaque.

There have been a number of special-production Shelby Mustangs in the years since, but Ford itself got back into the game in a real way for 2007, with an all-new Shelby GT500 model based on the redesigned-for-2005 Mustang. The GT500 nameplate went on hiatus again with the Mustang’s redesign for 2015, but it’s back with a vengeance for 2020.

Nowadays, regular-production V8 Mustangs are definitely nothing to sneeze at. From 2015 on, all Mustang GTs have offered 435 hp or more, and a number of high-performance versions have been released of late that built on the mainstream GT’s output. But no production version could match the twist of the new Shelby GT500.

The heart of the matter is the supercharged 5.2-liter V8 generating 760 horsepower and 625 lb-ft of torque. Each is hand-built, and includes the assembler’s signature (at bottom of right photo) on the supercharger’s housing.

As in the early years of the Shelby, there is now both a GT350  — which currently boasts 526 horsepower — and the new GT500. The latter adds a supercharger to a 5.2-liter V8 to create the most powerful engine ever squeezed under a Mustang hood: 760 horsepower and 625 lb-ft of torque. Backing that is a new 7-speed Tremec dual-clutch automated-manual transmission, an adjustable suspension, and Brembo brakes, all combining to make for a Mustang that is a ferocious performer on both the drag strip and a race course.

And we got to experience that firsthand. 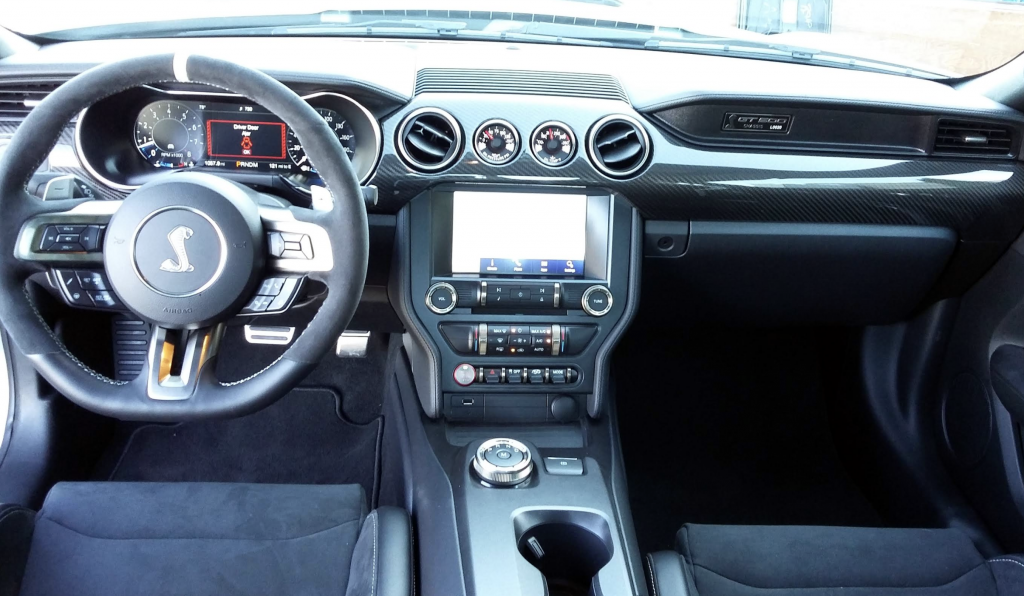 Dashboards retain the useful ergonomics of all Mustangs. Note the rotary shift dial on the console, something we haven’t seen in earlier Mustangs tested.

While the street-drive portion of the preview took us through some curvy roads in the mountains north of Las Vegas, speed limits were low and police sightings common. But neither were a problem once we got to Las Vegas International Speedway, where we got to exercise the GT500s on both road course and drag strip. 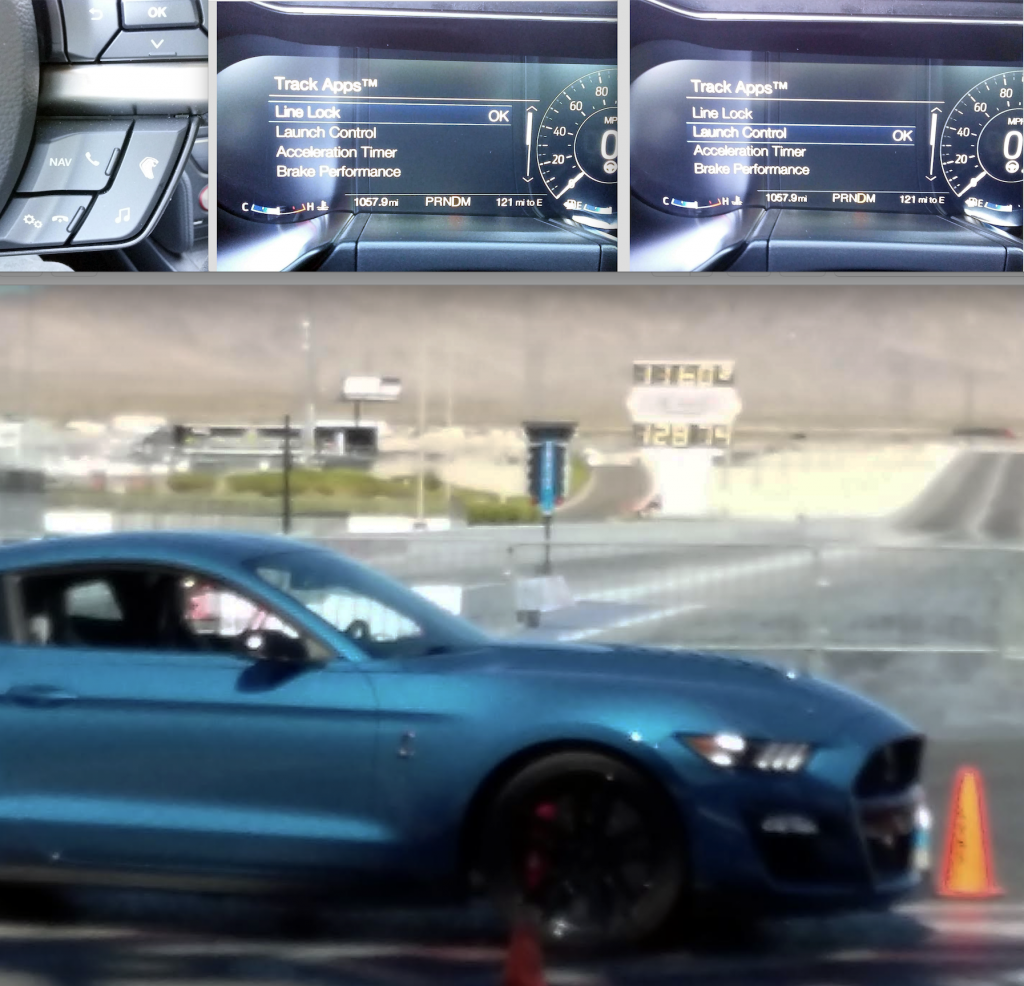 We had the opportunity to time the Shelby GT500 on the drag strip at Las Vegas International Speedway. Pressing the “Snake” button on the steering-wheel hub engages Line Lock (which holds on the front brakes but not the rears, allowing you to “clean off the tires” — and create lots of smoke), and then Launch Mode, which balances the amount of power going to the rear wheels to provide maximum traction. Despite a slick track, times were in the low-to-mid 11s at nearly 130 mph.

Since both tracks allowed for speeds well in excess of 120 mph, we were buckled in with not only helmets, but NASCAR-inspired Hans devices (essentially a helmet brace that prevents much head movement in a crash – or even in turns). Suffice it to say that the GT500 probably has higher limits on a road course than you’ll have the guts to explore, and the drag strip times were in the low 11s at near 130 mph – until the track got a bit slick. Note, however, that these times were achieved by utilizing the car’s Line Lock and Launch Control features, the former of which allows you to lock the front brakes and spin the rear tires to clean them off and heat them up, the latter attempting to adjust the throttle to put as much power as possible to the ground on takeoff. Ford’s claiming 3.3 seconds 0-60 and quarter-mile times of less than 11 seconds, so we were close to the latter.

While all this was both great fun and quite informative, a lot about the GT500 can be appreciated without exploring its limits. While any “mainstream” Mustang makes for a fine everyday driver – as evidenced by the fact they’ve won Consumer Guide Best Buy accolades for the past several years – the GT500 rewards with some great audible and tactile elements. 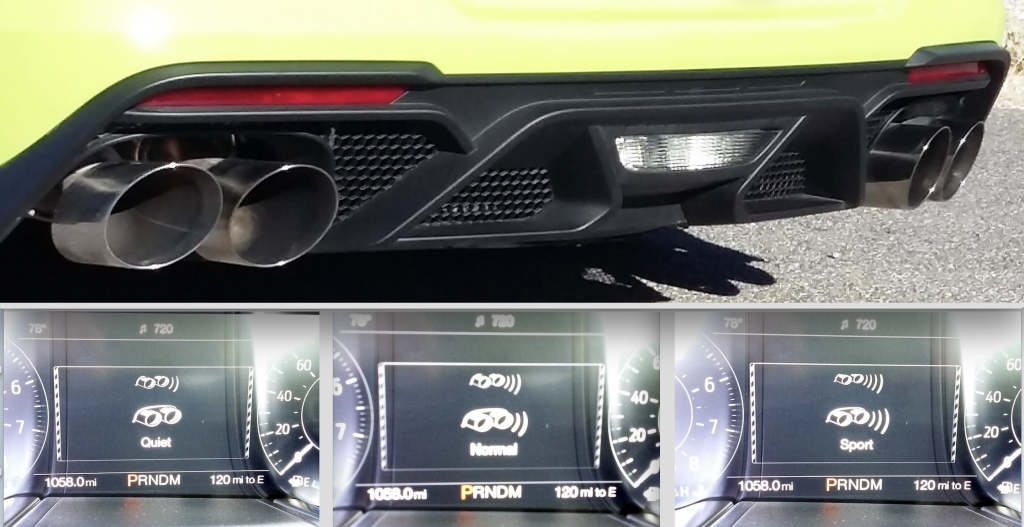 If you can’t make use of all the power, you can at least revel in its sound. A dashboard flipper allows you to adjust the volume of the exhaust, which — at its loudest — is downright awesome … though neighbors might not agree.

First, the sound. While the engine is supercharged, not much traditional supercharger whine is heard. According to one Ford source, that’s intentional, because the exhaust note is the star. And indeed, that note is pure music — very loud music.

But fortunately, it can be tempered. A switch on the dash allows you to choose different exhaust volumes, the quietest of which is quite civil — nice, because the loudest … uh … isn’t.

Then there’s the “tactile” experience. The GT500 is unique among Mustangs — and pony cars as a whole — in offering a racing-style dual-clutch automated-manual transmission. These transfer more power than do conventional automatics (which require an engine-driven hydraulic pump) and shift far more quickly than anyone could with a manual (as quick as 80 milliseconds, or 80 one-thousandths of a second). The GT500’s 7-speed gearbox offers selections for Normal, Weather, Sport, and Drag & Track, with most settings delivering a very decisive shift snap, the urgency also adding to the audible sensations. However, downshifts when nailing the throttle at speed are a two-step process; you get an intermediate gear before you get the optimum gear, a typical shortcoming of dual-clutch transmissions that slightly delays the GT500’s ultimately explosive acceleration. On the opposite end of the dynamic equation, hitting the “whoa” pedal brings reassuringly strong response from the huge brakes, and the deeply bolstered seats hold you in place with a determined mid-torso hug.

Also part of the Carbon Fiber Track Package is an adjustable rear spoiler (center) that replaces the standard one at left, along with  high-performance tires. The big Brembo brakes (with “subtle” red calipers) are standard fare.

On top of the base GT500 — which retails for $73,995 including Gas Guzzler Tax and destination — there are three option packages. The $1500 Handling Package includes mostly front aerodynamic aids. The Carbon Fiber Track Package ($18,500) adds such items as carbon fiber wheels shod with Michelin Pilot Sport Cup 2 tires, a more prominent adjustable rear spoiler, and a rear-seat delete (saving some weight but turning it into a 2-passenger car). A $3000 Technology Package brings a Bang & Olufsen premium sound system, blind-spot alert, puddle lamps projecting the “Shelby snake” logo, driver-seat memory, and a voice-activated navigation system. The GT500 is slated to arrive in dealerships later this fall.

The revived-for-2020 Shelby GT500 model takes over the crown of “King of the Mustangs,” and it’s certainly poised to hold that title for the foreseeable future.