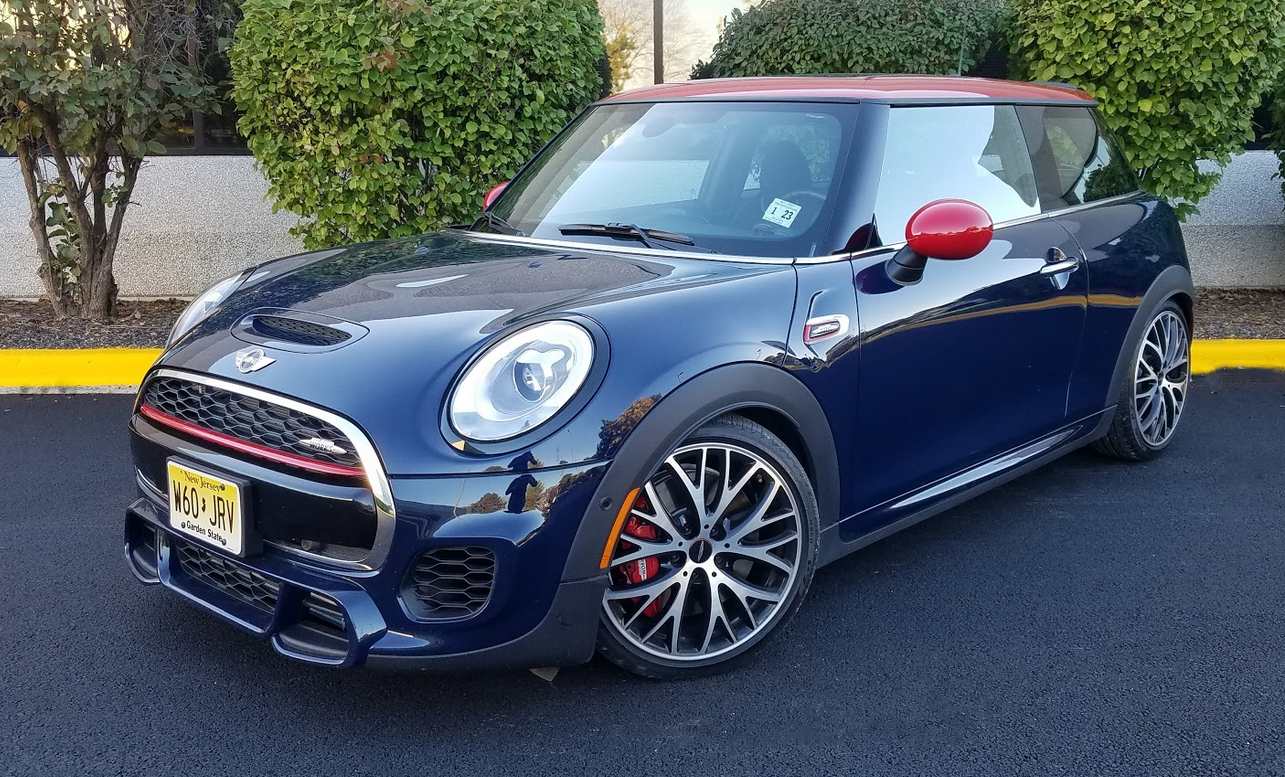 The good: Upscale trimmings inside and out for a sporty compact hatchback

The not so good: Steep pricing, ride is a bit stiff

The John Cooper Works version of the 2-door Mini Cooper Hardtop packs a lot of driving excitement into a small space. All you have to do to tap into it is unpack your bank account first.

Superlative handling and bracing acceleration simmer in this little pepper pot that’s garnished with some distinctive interior features. To get a taste, however, costs $32,650 with delivery. Add drinks, dessert, and a tip like Consumer Guide’s well-optioned test car did and your party of four—as in seating capacity—could be out the door for almost $40,000. Separate checks? 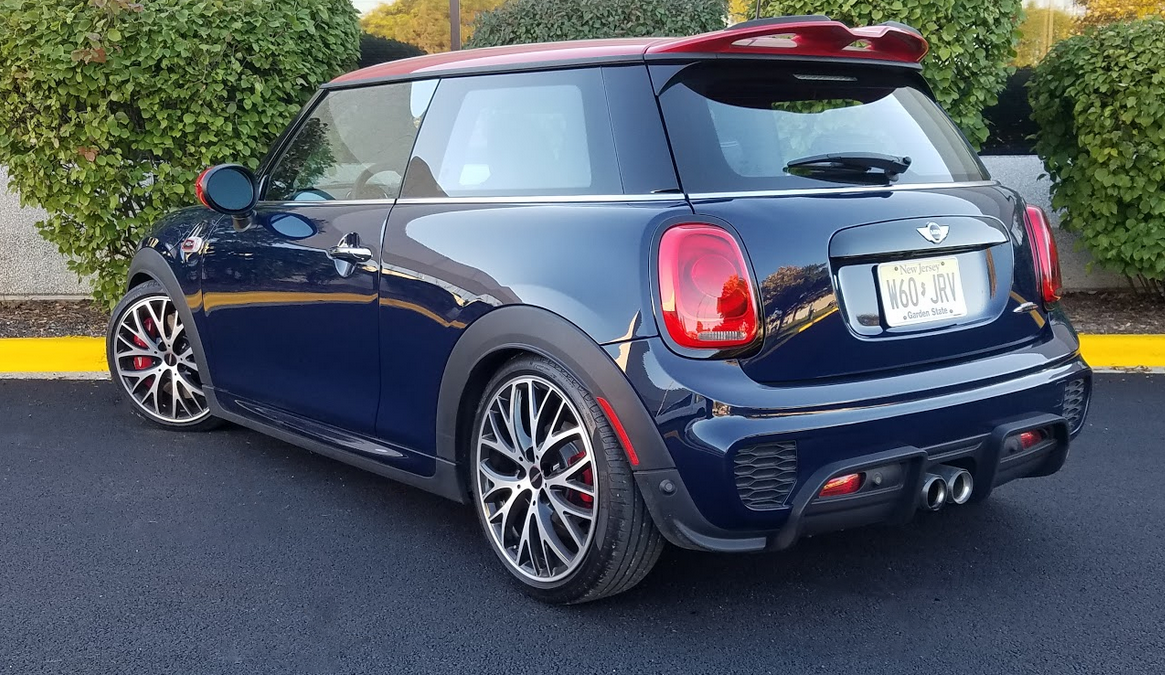 The pricey Lapisluxury Blue paint on our test vehicle is part of the “Mini Yours” line of premium trim options; it’s a non-metallic dark-blue hue with an especially deep tone. Mini says the paint color is inspired by the prized ultramarine pigments from the Middle Ages that were made by grinding Lapis Lazuli stones. The contrasting Chili Red roof and rearview-mirror caps are a no-cost option.

Mini did little to the Cooper overall for 2018. A rearview camera and rear parking sensors became standard, and the action of windshield-wiper and turn-signal stalks was modified—they no longer return to center, but stay in position when activated. The car pretty much is what it has been since the arrival of the third generation in 2014.

The JCW is the top performer of the group. Its center is a turbocharged 2.0-liter 4-cylinder engine that, in the front-wheel-drive 2-door and convertible, makes 228 horsepower at 5200 rpm and 236 lb-ft of torque at a low 1250 rpm. (There’s more torque at hand in the Works versions of the all-wheel-drive Clubman wagon and Countryman subcompact SUV.) A 6-speed manual transmission is standard, but our test car sported the optional 6-speed automatic. With its torque peak arriving so soon after the engine starts revving, the diminutive hatchback strongly gets off from a standing start. On the highway, it delivers fine midrange pop when the transmission kicks down, and the JCW 2-door is comfortable sustaining a brisk pace for miles on end.

Any Mini Hardtop has an exuberantly styled interior, but the Mini Color Line “Glowing Red” trim on our test vehicle took things up another notch. Some testers complained that some of the Hardtop’s quirky controls aren’t as ergonomic as they should be. The cramped rear seat is best suited for children.

By Mini’s testing, the automatic shaves a tiny bit of time off the 0-60-mph blast (5.9 seconds); by the EPA’s reckoning it slightly improves fuel mileage. The Works Hardtop with automatic is projected at 25 mpg in city driving, 32 mpg in highway driving, and 28 mpg combined. This driver recorded 28.0 mpg after driving the test car for 182 miles with 45 percent city-type operation.

Accompanying the piquant powertrain is a chassis with a sport-tuned suspension and 4-wheel disc brakes with 4-piston front rotors. The car has a low, road-skimming profile as it rolls on unique black-finish 17-inch alloy wheels caressed by run-flat tires. Performance-tread rubber is standard, but the CG test car had all-season tires that are a no-cost option. The rack-and-pinion steering is responsive and highly precise, and the suspension delivers lockdown control of cornering lean. Here’s the yin to that yang: an ultra-firm, “active” ride that jostles the Mini JCW—and its occupants—on all but the smoothest roads.

The Hardtop’s rear seat backs fold for lots of extra cargo space (34 cubic feet in total, vs. just 8.7 cubic feet behind the rear seats), but they leave an uneven load floor with a pronounced step that makes it hard to slide long items forward.

Command of the exemplary steering rests in the driver’s hands, and they rest on a meaty leather-wrapped steering wheel with pronounced 10-and-2 grips and red contrast stitching. That’s one of the JCW’s interior distinctions. The other is seating clad in black cloth and Dinamica microsuede. The front buckets feature large side bolsters to keep passengers in place during cornering, manual height adjustment, retractable thigh supports, and integrated headrests. Contrast stitching and the John Cooper Works emblem lend some visual distinction.

Unfortunately, the front seats are not all that comfortable. You feel all the articulations in them as little blocks pressing against your back and bottom, and the underside of your legs. At least the expandable cushions give proper leg support when needed.

Front legroom is kind of hemmed in, including to the sides. That’s nothing compared to the incredibly tight legroom in back, however. No one could have sat behind this slightly sub-6-foot reviewer, but if all the stars align and someone does squeeze in back—where the seating position is fairly upright—they’ll find headroom that’s about as good as it is in front. The Mini’s essential box shape can be thanked for that, and for the good driver vision to just about any direction.

Other standard equipment includes power-folding exterior mirrors, automatic LED headlights and rain-sensing windshield wipers, automatic dual-zone climate control, tilt and telescoping steering column, “Performance Control” (a version of traction control with torque vectoring), selectable “Mid,” “Sport,” and “Green” driving modes, ambient lighting, Bluetooth connectivity, Mini Connected app integration, and rear parking monitor. Then, too, there is the console-mounted central controller through which you must work to operate the audio system, optional navigation, and other features that register on Mini’s signature large circular central display screen. It is, for all intents and purposes, the iDrive system used by corporate parent BMW, and it is at least as difficult to use with any speed or ease. Fortunately, climate-system management is independent of this. CG’s test vehicle was fleshed out with extra-cost items like premium Harmon/Kardon sound, satellite radio, premium Lapisluxury Blue paint, heated front seats, keyless entry, a panoramic moonroof, and more. Apple CarPlay smartphone compatibility is coming for 2019.

Inside, padded soft-touch material can be found on the dash, door armrests, and center armrest. Door tops look like they’re covered in soft material, but there is no underlying give. There’s decent room in the glove box, but it’s a little hard to reach based on its position in dash. A small covered storage nook resides within the flip-up center armrest. There are cup holders in the console, small pockets in the doors, and a tiny floor-level net pouch on the passenger side of the console. Device inputs at the far front of the console are a little hard to reach. The rear row has more cup holders (3) than seats (2), and there is a pouch on the back of each front seat. Cargo space is sparse, but there is a pretty good bonus space under the load floor. Given the car’s ride height, liftover is very low. Rear seats are split 60/40 and fold flat, albeit a few inches above the cargo deck.

In the universe of small cars, the Mini is a premium specialty product. In John Cooper Works form, it veers off into entirely different territory.

Our Mini JCW Hardtop had one of the lowest ride heights of any test vehicle we’ve had in recent years, but thankfully we didn’t experience any pronounced scraping on driveways and the like during our test period. The low stance should delight this car’s target audience–a demographic that is likely to happily tolerate the JCW’s fairly stiff ride as well.