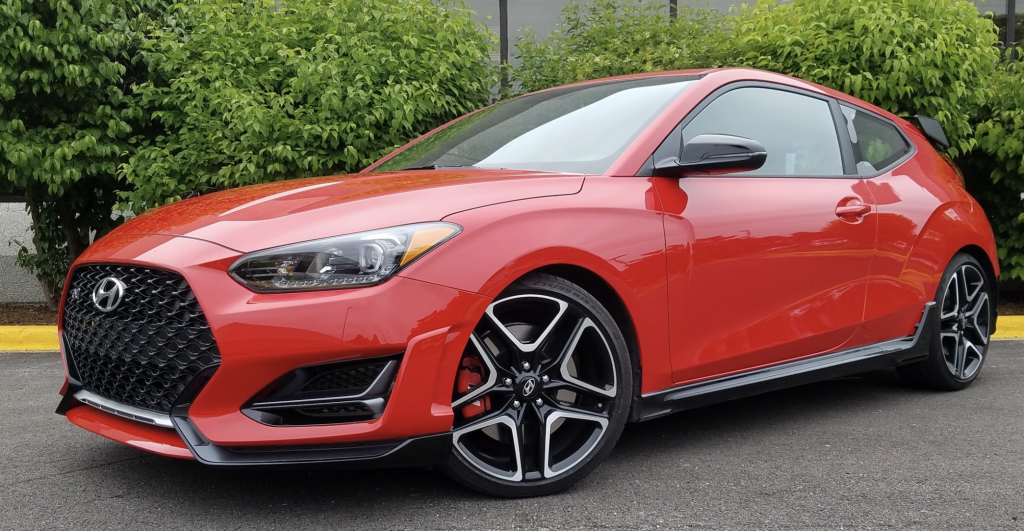 The not so good: Rear outward visibility

Hyundai’s unique 3-door Veloster hatchback further expands its performance envelope with the addition of the N trim level. It is based on existing turbocharged models but with a larger engine bringing a substantial horsepower boost, and it represents the first product of the company’s new N Brand performance division. 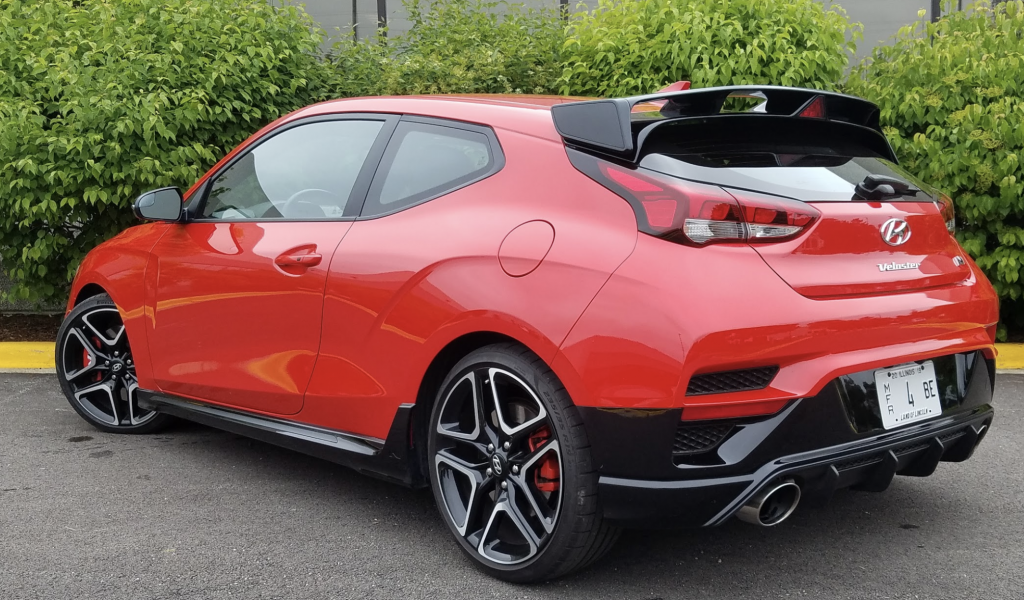 Veloster N looks the part with sporty wheels, a prominent rear spoiler, black lower accents, and huge dual exhaust tips that can be set to snort out some terrifically racy notes.

And that horsepower boost is quite substantial. While other turbo Veloster models get a 1.6-liter 201-horsepower engine, the N is blessed with a 2.0-liter making 250 horsepower, or 275 hp with the optional Performance Package. Our tester had that package, and the engine was linked to a slick-shifting 6-speed manual transmission (which is mandatory on the Veloster N) with short-throw shifter and rev-matching on downshifts – what turned out to be a very satisfying combination, indeed.

As we’ve covered the Veloster in a First Spin of the redesigned 2019 model along with test drives of 2019 base turbocharged R-Spec and higher-line Turbo Ultimate versions (we invite you to read those reports for more details), we’ll concentrate on the N’s differences here. 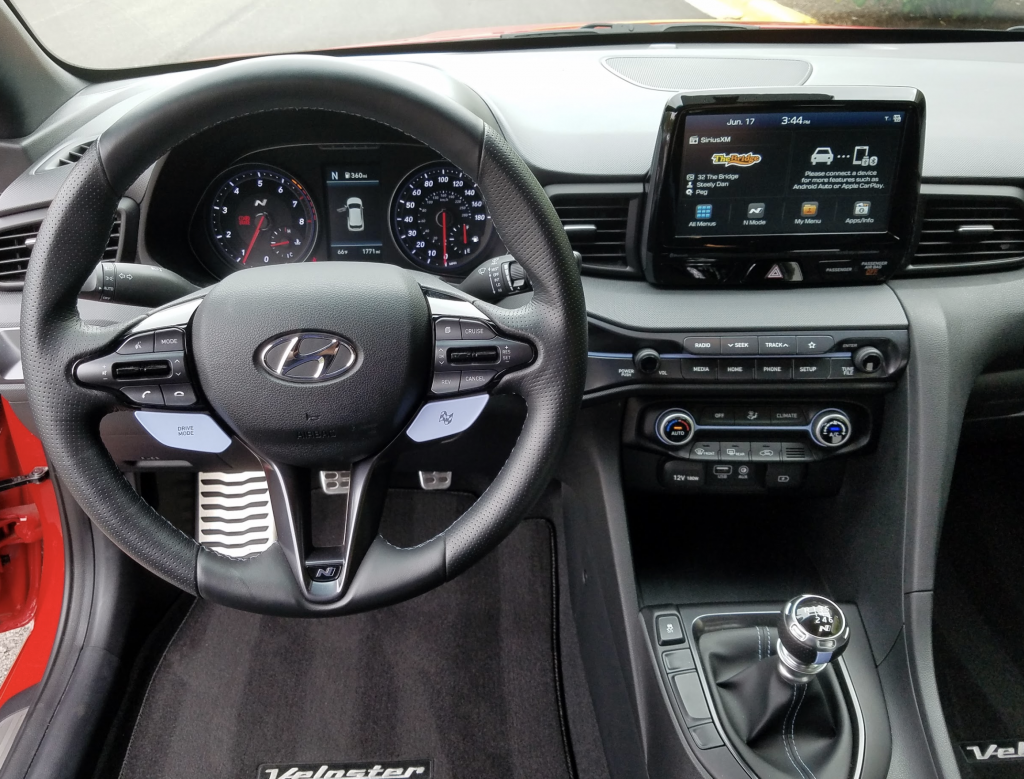 Aluminum pedals and foot brace add to the sporty-looking interior. Buttons on the steering wheel can instantly select “N Mode,” which adjusts all settings to maximum sport. The short-throw shifter was a joy to use. 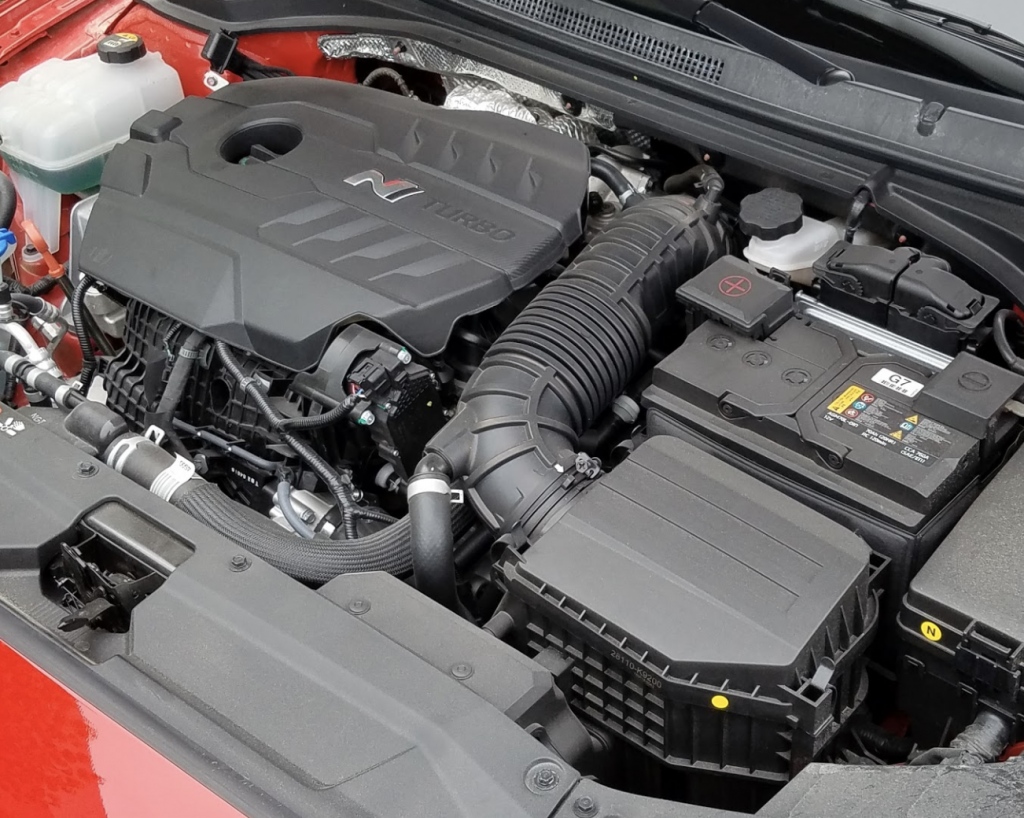 The heart of the Veloster N is its unique 250-horsepower 2.0-liter turbocharged engine (other turbocharged models get a 201-hp 1.6-liter), which is boosted to 275 hp with the available Performance Package.

It also brings a higher price. Whereas the R-Spec started at a very appealing $23,785 including the $885 destination charge, the Ultimate’s ante increased to $29,035; in between is the Turbo model. The N sits between the Turbo and Ultimate with a base price of $27,785, with the Performance Package adding $2100, bringing the total to $29,885.

It all adds up to a darn nice sporty hatchback/coupe. While there’s notable turbo lag, having a manual transmission lets you control that a little better – particularly on take-off – and the sudden surge of power it delivers when boost arrives is invigorating. Notable here is the exhaust note, which makes an appropriately sporty crackling sound on shifts. The shifter is a joy to use, handling is nearly sports-car nimble, and the ride isn’t as punishing as the low-profile tires and handling prowess might suggest.

Cargo space is fairly good even behind raised second-row seats, which fold but leave about a 3-inch step.

The rear door on the passenger side eases entry to the rear seat and also eases flipping the folded seat back up to its passenger position; both are much harder on the driver side, which lacks a rear door.

As sporty compact coupes go, the Veloster is also fairly practical. Visibility is good except to the rear corners and straight back (the top of the rear window being low), though the visor doesn’t extend far enough when swung to the side to cover the whole window. Controls are easy to use and reach, interior storage is adequate, and there’s a decent amount of passenger space; an average-size adult would likely fit in the back seat, though not quite behind a fully rearward front seat. Getting in on the passenger side is “encouraged” with a rear door on that side only. Cargo room is also good, though while the rear seat backs release from the trunk – leaving a 3-inch step above the cargo floor – folding the driver-side one back up is a pain, as you have to reach back through the front door. (On the passenger side, there’s the rear door that not only makes getting in and out easier, but also makes it easier to raise the seat back.)

Others that play on the “hot hatch” field include the Mini hardtop and Clubman, Subaru BRZ and similar Toyota 86, and the venerable Volkswagen Golf GTI. Our favorite of these has long been the GTI, but for those seeking something a little different, the Veloster makes for an interesting alternative – in virtually any of its turbocharged forms.

The N more than lives up to the Veloster’s sporty profile, and puts it in performance contention with the hottest hatchbacks out there. It’s also fairly practical, and prices are quite reasonable for what you get.