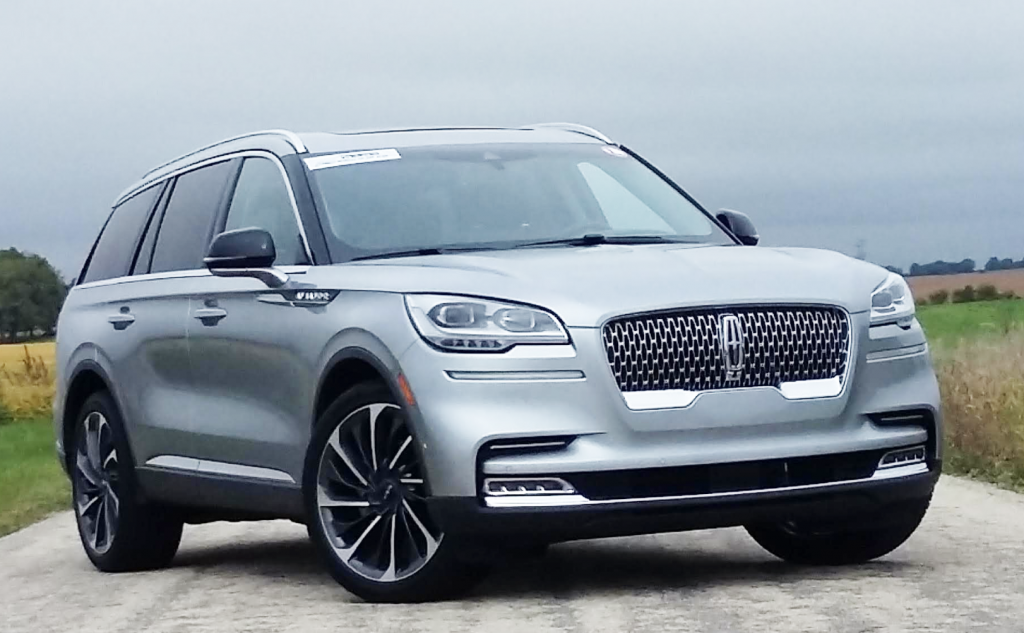 Seems that Lincoln – once synonymous with luxury cars – is putting lots more focus on its luxury crossovers.

Lincoln has been completely redesigning its slate of SUVs of late, starting with the all-new full-size Navigator for 2018, followed by an update of the midsize MKX that was renamed Nautilus for 2019. Next came the midsize, 3-row Aviator – the subject of this report – which just went on sale as a 2020 model, soon to be joined by the new 2020 Corsair (based on the redesigned 2020 Ford Escape), which is the replacement for the compact MKC.

Unlike most First Spin reports – which are based on day-long product overviews and drives at far-flung places – this one stems from a briefer drive of both gas and plug-in hybrid versions of the Aviator at our annual MAMA (Midwest Automotive Media Association) Fall Rally held at the Autobahn Country Club racing facility in nearby Joliet, Illinois. As it just happened to coincide with an official “static” display of the Aviator at a local Chicago hot spot, the combination proved to be sort of a mini preview. And I didn’t have to hop on a plane. 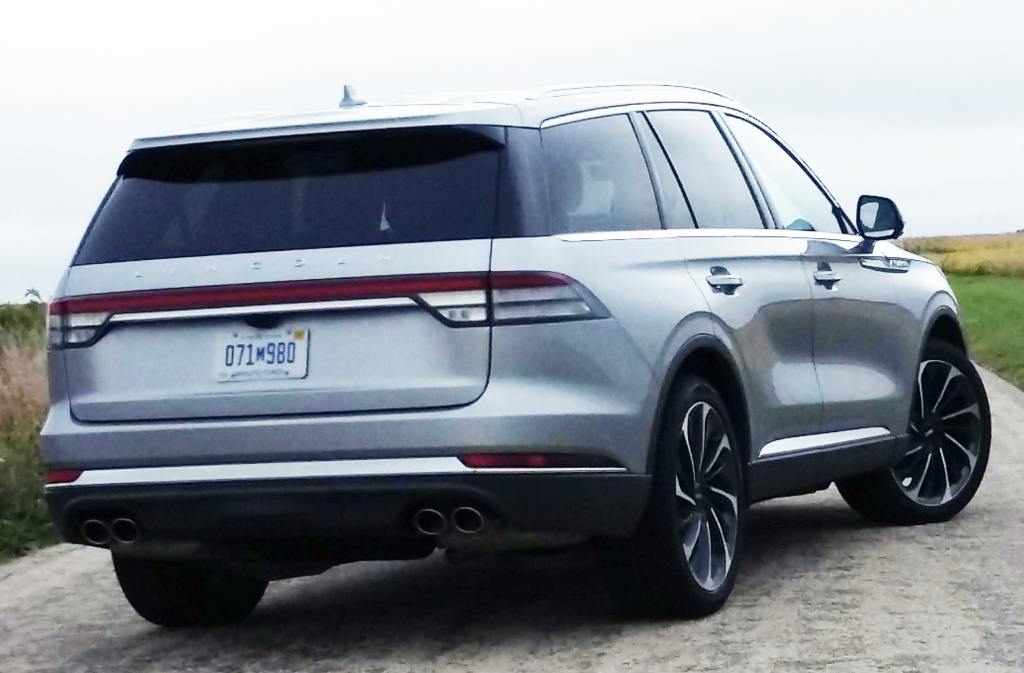 The 2020 Lincoln Aviator seats up to seven, or six with available second-row buckets. Both gas and plug-in hybrid versions are offered, the latter being a luxury rocket.

One advantage to a local drive is that we managed to find real-world pockmarked pavement on which to judge ride quality; preview drives typically don’t offer that capability. 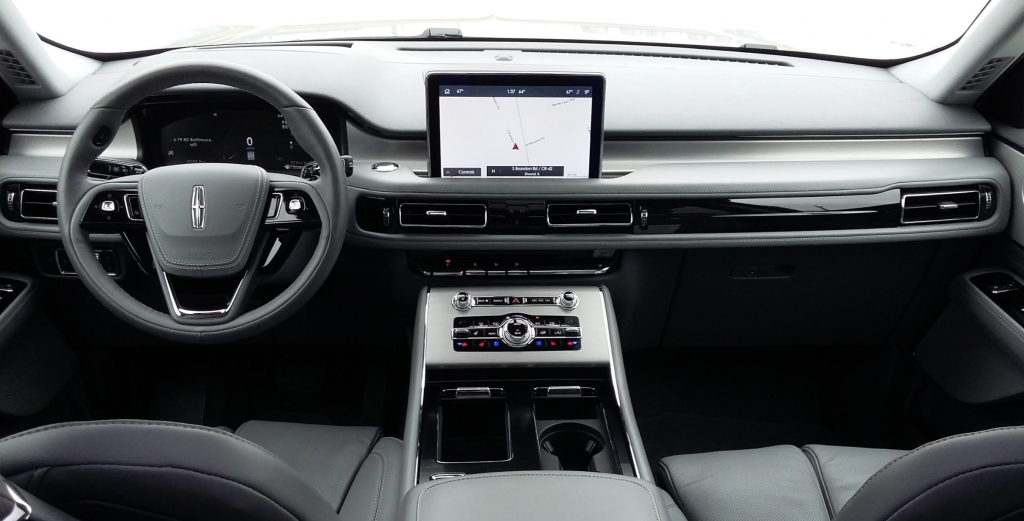 A clean dashboard design hosts a 10.1-inch touchscreen, and “piano key” shift buttons (just above the radio knobs) clear console space that’s put to very good use, with two cupholders and two bins in the dark area ahead of the armrest, plus a large open bin beneath the console.

Although our test drives were brief compared to those of a regular preview, they were quite telling nonetheless. Aviators are offered in gas and plug-in hybrid form in five trim levels, with lower models being available with rear-wheel drive or all-wheel drive, while higher levels come standard with all-wheel drive. Gas models are powered by a twin-turbo 3.0-liter V6 putting out 400 horsepower and 415 lb-ft of torque mated to a 10-speed automatic transmission. Plug-in hybrids get a similar engine aided by an electric motor to put out 494 horsepower and a whopping 630 lb-ft of torque.

The Grand Touring hybrid driven came with a nicely appointed two-tone interior (far left and far right), while the Reserve (center) had monotone grey. There’s good adult room all around. 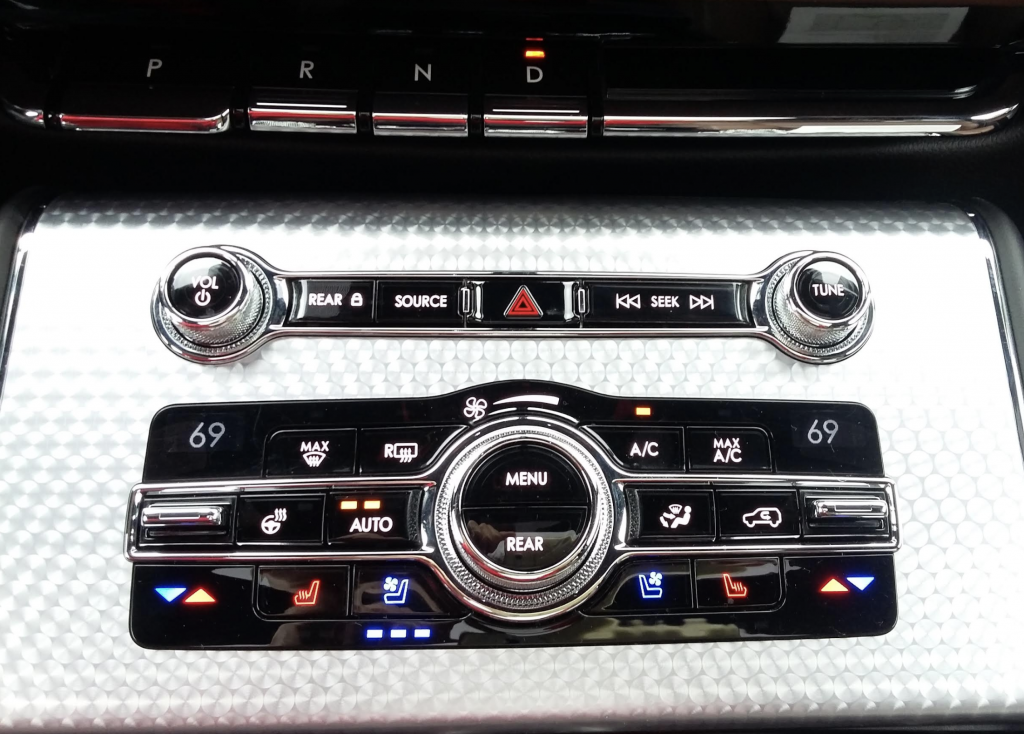 The Grand Touring came with cool “engine turned” aluminum trim. At top is the row of shift buttons (red with chrome edges) that turned out to be both space-efficient and handy.

Visibility is decent all around (though wide center pillars block some over-the-shoulder view), aided by standard front and rear obstacle detection and 360-degree cameras with front and rear washers on all but the base model. Also helping are second- and third-row headrests that fold out of view.

Interior room is ample for adults, and my 5’9 frame fit quite comfortably in the third row, though in a knees-up posture. Notable on the Grand Touring was a very nicely finished two-tone interior with engine-turned aluminum trim panels, a pattern that was popular on dressier cars “back in the day.” Notable on both was the gear-selector layout, which consisted of a row of “keys” mounted just above the climate-control panel that frees space on the console for storage. And it freed a lot of space; not only are there two covered console cupholders with a small bin in front of them, but also a large covered bin next to them and a large under-console tray, along with the usual glovebox, console box, and door map pockets. In all, cockpit storage is an Aviator strength. 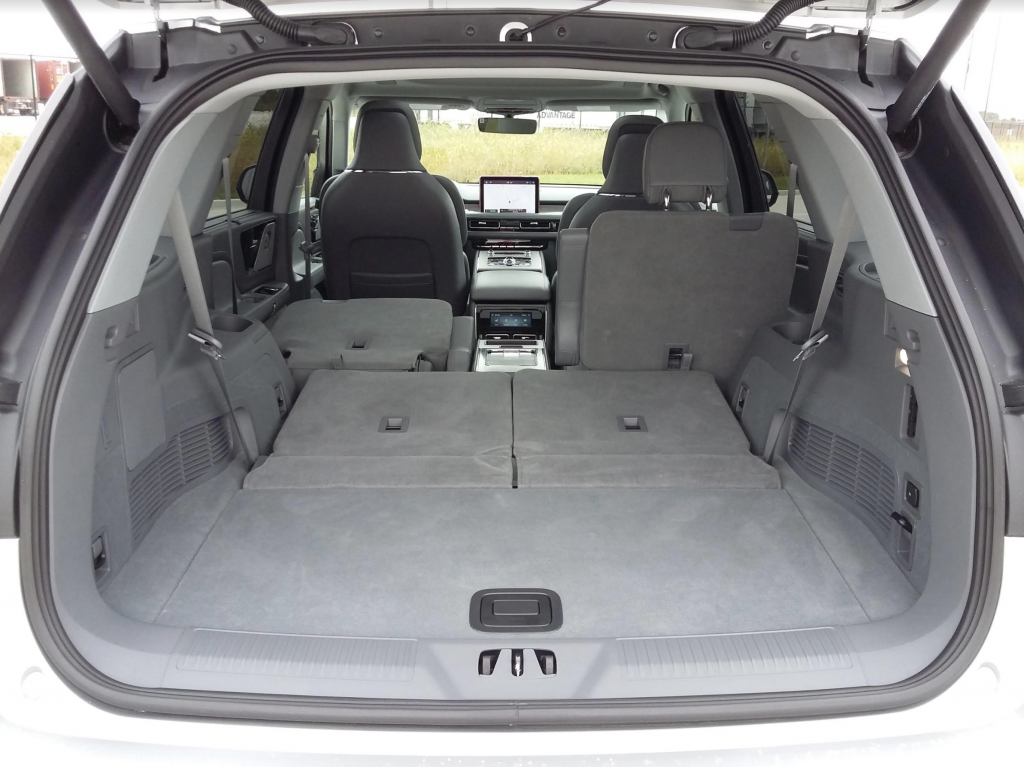 There’s lots of cargo space even behind the third row, which power folds for convenience. A power liftgate is standard, with a hands-free power liftgate added in the step-up Reserve.

So is cargo space. Not only is the area in back large and cubic once the second- and third-row seats are folded flat, but the third-row seat backs power down, and there’s a 12-volt outlet in the cargo area.

The three “faces” of Aviator: Standard and Reserve get the grille at left, Grand Touring the grille in the center, and both Black Labels (gas and plug-in hybrid) the grille on the right. Note that wheel designs also differ.

The Grand Touring is the base plug-in hybrid model, and it comes standard with all-wheel drive for $70,540. It also adds 20-inch wheels and a panoramic sunroof, with similar options to the above.

Topping both the gas and plug-in hybrid lineups are the Black Label editions, which come standard with all-wheel drive and start at $79,435 for the gas model, $89,540 for the plug-in hybrid. They include most of the equipment available on lower-line models, have distinct 22-inch wheels, and offer a choice of interior “themes” that allow a choice of color and trim combinations.

With the existing Navigator along with the renamed Nautilus and new Aviator and Corsair, Lincoln has now completely backed away from labeling its crossovers with three-letter designations. (In fact, the only Lincoln still carrying an acronym is the MKZ midsize sedan.) Hurray for that. And if the Navigator — which is a Consumer Guide Best Buy in the Premium Large SUV category — and this impressive new Aviator are any indication, Lincoln’s newfound focus on crossovers and SUVs may rejuvenate the brand as a powerhouse in the premium categories.

As a premium midsize 3-row crossover, the Aviator is up against some stiff competition. But it fares well, especially the plug-in hybrid models, which are surprisingly potent.