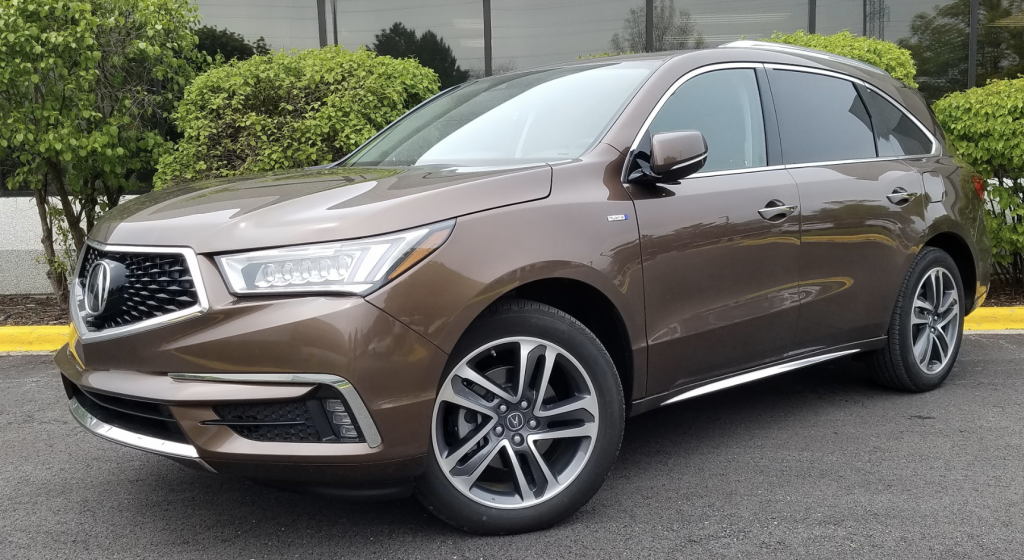 The good: Roomy well-finished cabin with upscale luxury ambiance, desirable safety features not bundled in pricey option packages as they are on many vehicles in this class

The not so good: Far too many infotainment functions controlled by single center-dash knob

Acura’s MDX has long ranked as one of Consumer Guide’s favorite premium 3-row midsize crossovers, being awarded our Best Buy honors since well before its 2017 refresh. 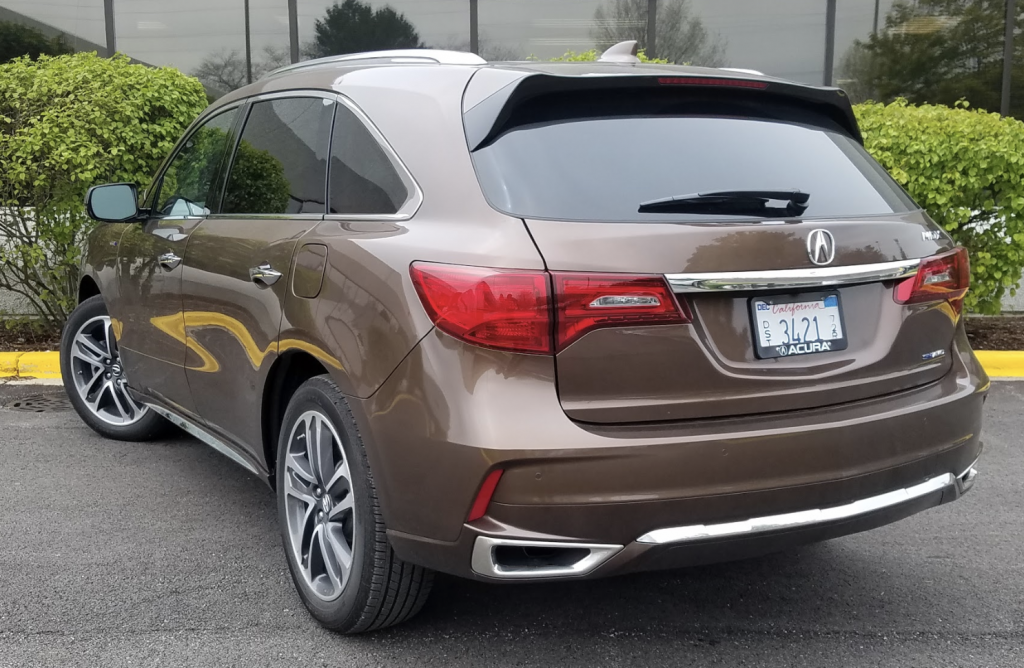 Our Sport Hybrid looked the part with dual exhaust outlets and fancy 20-inch alloy wheels, and proved that performance and fuel economy can go hand in hand.

Speaking of its 2017 update, we reviewed a model very similar to this one that year, so we invite you to read that report for more details. Here we’ll focus on changes that have occurred since, and touch on some of the vehicle’s finer points.

For 2018, the MDX added Apple CarPlay and Android Auto as standard equipment. Additional updates arrived for 2019 with the availability of 12-way power driver and front-passenger seats, expanded availability of Acura’s Active Damper System suspension to non-Hybrid models, and an A-Spec Package for non-Hybrids that adds some sporty touches.

Among premium midsize crossovers, about half are 3-row vehicles, the rest 2-row — and a couple come in both forms. That’s a delineating factor for many buyers, so for 3-row models, we tend to emphasize the usefulness and ease of conversion of the third row. And that’s one area in which the MDX fares well. 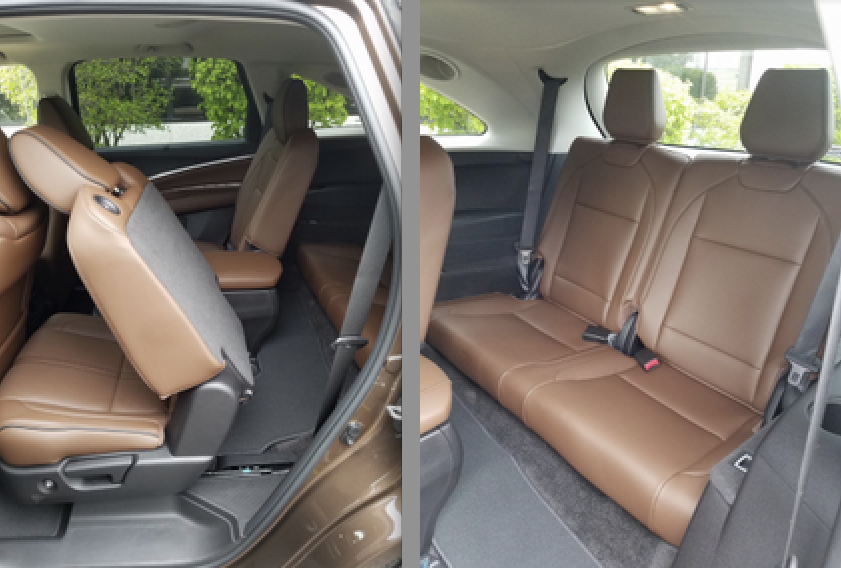 Second-row seats can be slid forward, with release buttons both below the side of the seat cushion and on the seat back, the latter of which can be activated by someone in the third row — which offers good room for average-size adults.

Although you can also get a second-row bench seat in the Hybrid, our tester was fitted with second-row buckets (cutting seating capacity from seven to six) along with a fixed console between them. In our tester, therefore, you accessed the third row through a portal revealed when the second-row seats were slid forward. That can be done either with a release button on the outside seat-cushion base (easy from outside the vehicle), or via a latch on the seat back (handy when seated in the third row). Once back there, average-size adults will sit in a knees-up posture, but they should find sufficient headroom and legroom. The latter can be adjusted by sliding the second-row seats fore and aft, and since legroom in the second row is vast, it should be easy to find a comfortable balance. (On non-Hybrid models, you can also get second-row buckets without a console, which allows for a “walk-through” passage between them to the third row.) 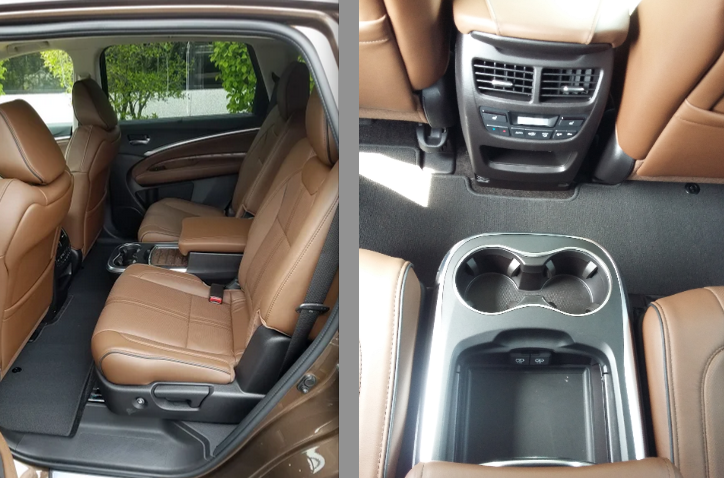 Second-row passengers enjoy lots of legroom and headroom, and a flat floor provides a center-seater (in models with a bench seat) fine foot space. Our Hybrid had a fixed center console with lots of storage space, along with climate controls, vents, and sunshades for the windows.

The second row also offers 6-footer headroom, and our tester provided heated seats, climate controls and vents, sun shades on the windows, and cupholders and USB ports in the aforementioned 2-tier console. Also, a flat floor allows more foot room for a center-seater in versions with a 3-passenger bench seat. A moderate ride height makes entry and exit a breeze.

Those in front are provided good headroom and legroom along with (on our tester at least) a power-tilt seat cushion and 4-way lumbar adjustment, both comfort pluses. The interior on our tester was richly appointed with brown leather upholstery and wood trim, with “touch” surfaces — particularly on the door tops — being very nicely padded. An appreciated feature was that the blind-spot alert light was mounted in the roof pillar rather than in the outside rearview mirror.

Our MDX Sport Hybrid Advance boasted a very upscale interior, with lots of leather, wood, and padded surfaces. We also liked that the blind-spot alert light was on the roof pillar rather than the outside mirror.

But those aren’t the MDX’s only positive attributes. Also of note is the Sport Hybrid’s responsive powertrain, ride comfort (particularly in the suspension’s Comfort mode, with things firming up in Sport and Sport +), and overall driveability and refinement. 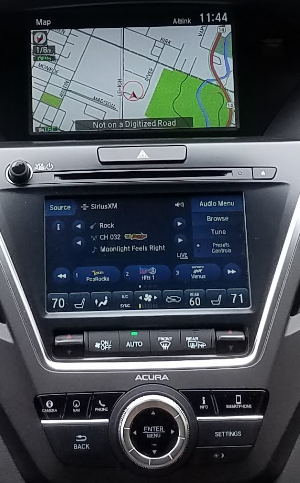 While better than many control layouts in the premium classes, the central dash knob (at bottom) controls too many functions with up, down, sideways, and pressing motions. Notable here, however, are the handy button that changes camera views (far left of the control knob) and the increasingly rare CD player.

If there’s a chink in the MDX’s armor, it’s in the control layout. A central dashboard knob controls a number of functions through rotational along with horizontal and vertical movements. It often requires more steps to make what should be simple adjustments, and those steps aren’t always as easily discerned as they are by supplying a dedicated button. But among premium crossovers — where control complexity is the norm — the MDX is better than most.

Otherwise, the MDX has few real faults. Visibility could be better to the front and rear corners, though our tester’s 180-degree rearview camera and 360-degree cameras help in this regard, and the latter can be easily activated by a dashboard button. A slight demerit is that the sunvisor doesn’t extend when swung to the side, leaving about three inches of the window uncovered.

One of our favorite “pluses” of the MDX is interior storage. A good-size glovebox is augmented by a huge 2-tier console box with sliding cover that houses three USB ports along with Aux and 12-volt plugs, two cupholders, a small covered front console bin with another 12-volt plug, and map pockets with cupholders in the doors.

Cargo space is another strength. Not only is the area quite large when all seats are folded flat – all resting level with the cargo floor – but there is also a 12-volt plug along with handy sidewall bins and a lot of hidden space under the floor.

Despite being a hybrid — with a battery that has to go somewhere — the MDX offers plenty of flat-floor cargo space along with sidewall pockets and a large underfloor storage bin.

As crossovers have become big sellers of late, manufacturers are focusing more effort on them. And as those in the premium segments tend to have higher profit margins, these classes have received more attention than ever. Yet the MDX continues to impress, not only with its dynamics and accommodations but also its value equation, meaning it remains a premium-midsize crossover of the highest order.