It’s probably a lot of work cranking out multiple concept vehicles every year, but the folks at Jeep have been introducing fun fantasy rides in conjunction with their Annual Moab Easter Safari for a while now.

For 2018, the Fiat Chrysler Automobiles division is showing seven such concept vehicles, each of which looks ready to hit the trail.

Shared here are all seven concepts, along with Jeep’s description of the vehicle and my comments on each. If you have a favorite, please tell us which it is. The place for comments is below the last vehicle. 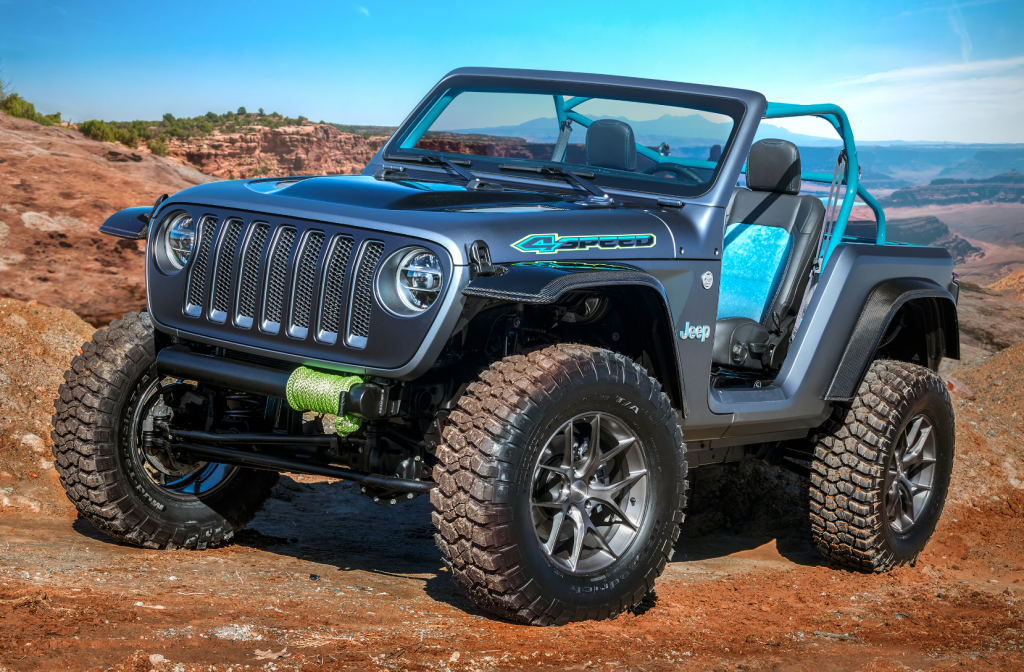 Light, quick and nimble, the Jeep 4SPEED concept is the latest in a line of lightweight Easter Jeep Safari concepts. Built “4SPEED,” this latest lightweight concept, following the popular Pork Chop concept in 2011 and Stitch concept in 2013, bolsters Wrangler’s off-road capability and performance through extensive weight savings, and showcases the all-new 2.0-liter turbocharged I-4 engine.

On the exterior, the Jeep 4SPEED concept features custom weight saving measures including a carbon fiber hood, high-clearance carbon fiber fender flares and a carbon fiber rear tub with perforated aluminum panels. The 4SPEED concept boasts a sleek side profile courtesy of a raked windshield, elongated door openings and an aggressively swept back custom cage. The rear of the concept utilizes custom, lightweight bodywork, and because of the combined weight savings, 4SPEED’s ride height is two inches higher than a stock Wrangler.

In addition to being lightweight, overall length has been shortened by 22 inches while leaving the wheelbase at its stock length, resulting in increased approach and departure angles.

The interior features a customized instrument panel, and re-trimmed front seats, while the rear seats have been removed and a welding curtain has been repurposed as a bikini top. The floor has been bedlined and the foot wells have been replaced with perforated aluminum panels.

The Jeep 4SPEED is powered by a 2.0-liter I-4 turbocharged engine, mated to an eight-speed automatic transmission.

Absolutely want to drive this thing, but I don’t enjoy looking at it. The neon-green tow cable and light-blue roll bar and seat inserts look like random parts-bin elements and do nothing to pull this concept’s look together. 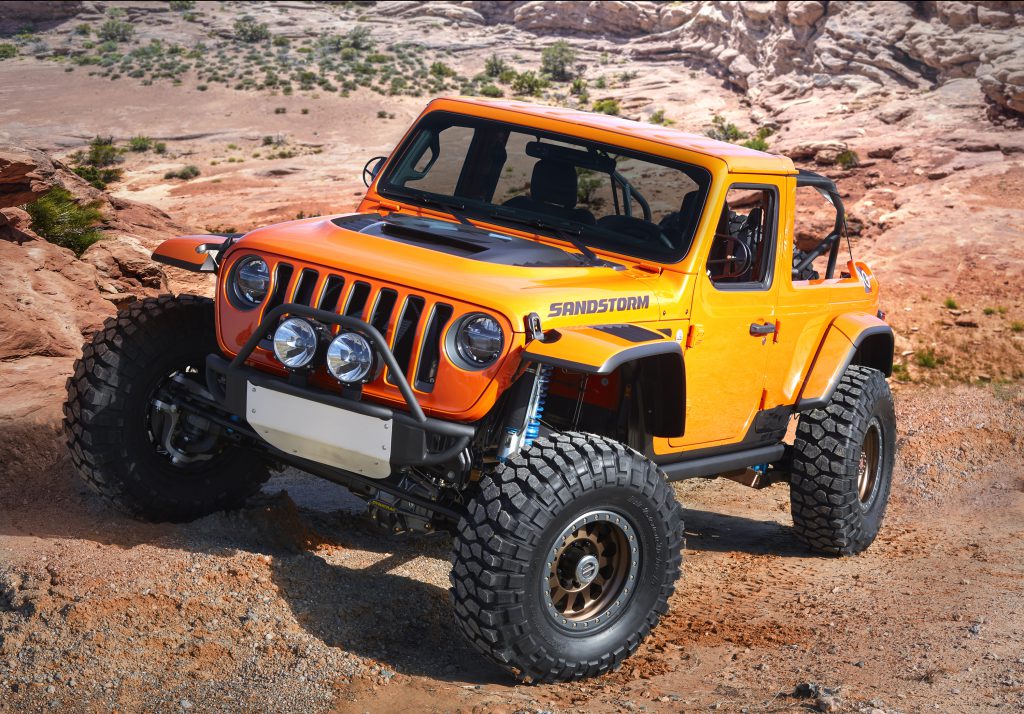 Inspired by Baja desert racers, the Jeep Sandstorm concept is all about blitzing long, sandy straightaways while still being capable of handling the daily driving duties. To accomplish this, the Sandstorm features off-road hardware that will handle both with ease, including an extreme-duty suspension system and a powertrain with excess power on tap.

To fit the Baja look, the exterior features custom styling cues including a vented carbon fiber hood, vented high clearance front and rear fender flares and a cage that includes a rear mounted lay down style spare tire carrier. The exterior handles and swing gate have been removed while the rear doors have been chopped for a cleaner look.

The front axle has been moved forward four inches and utilizes a heavy-duty longarm four-link suspension and track bar. The rear axle has been moved back two inches and utilizes a triangulated trailing arm four-link suspension. The longer wheelbase allows for increased high-speed stability. Custom coilovers and bypass shocks allow the front wheels to travel 14 inches while the rear wheels can travel up to 18 inches.

This is very cool. Pushing the front axle forward removes all overhang, giving this concept an eager, pugilistic look. The stubby, regular-cab-pickup look only adds to the appeal. Jeep can call this truck daily-driver capable, but with 5.68 axles, a road-going example of the Sandstorm would probably have a hard time returning 10 mpg. 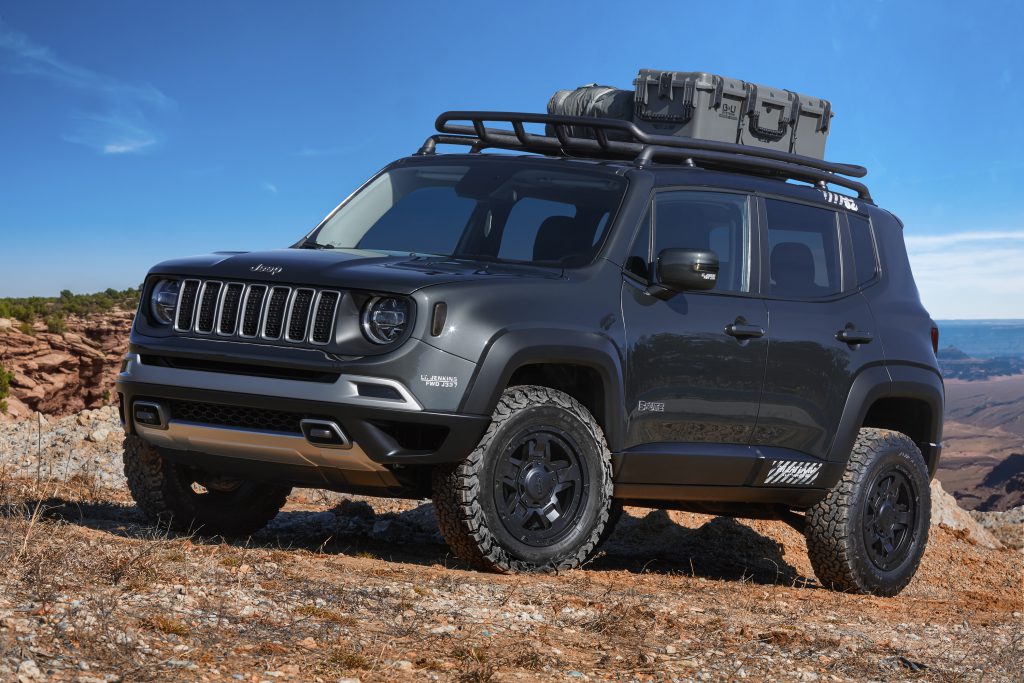 The Jeep B-Ute concept is equipped with a variety of Jeep Performance Parts for the ultimate off-road adventure.

Inside, the B-Ute features custom trimmed seats with Mineral inserts, a Carbonite finish on the shifter, speaker and vent surrounds, Piano Black inserts, a MOLLE system on the back of the front seats, and Mopar all-weather floor mats.

The Jeep B-Ute is powered by a 2.4-liter Tigershark engine, mated to a nine-speed automatic transmission.

The B-Ute Concept is nothing more than a rolling advertisement for Jeep accessories, and I am totally cool with that. Everything about the B-Ute looks tough and tidy, the way a real off-roader should look. 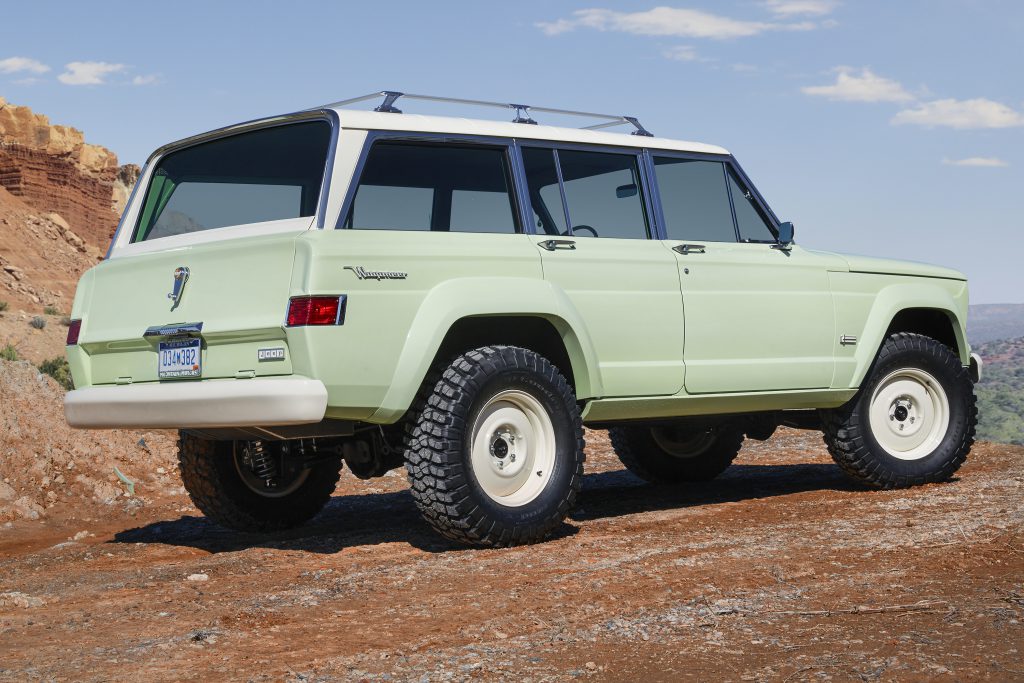 The Jeep Wagoneer Roadtrip stirs up nostalgic memories of going to Yellowstone National Park on a summer family vacation. This particular Wagoneer retains its heritage and charm as it continues to utilize its original steel body, while the chassis and drivetrain have been updated.

The wheelbase has been stretched five inches, and the body has been updated to accept the additional length, a wider track and custom fender flares. Other subtle exterior styling tweaks include reshaped wheel wells, bumpers and integrated rock rails. A razor grille freshens the look up front, while Bottle Green architectural glass replaces the original pieces.

Inside, the Wagoneer features original front and rear bench seats, door panels, kick and rear panels, all trimmed in Oxblood-colored leather. A wicker headliner gives the Wagoneer an open, lighter feel and the floor has been bedlined. Additional interior details include a custom cooler fashioned from period-correct luggage, and a tool box created from the valve cover of this Wagoneer’s original 230 Tornado OHC-6 engine.

Known as the original luxury 4×4, this 1965 Jeep Wagoneer is rich with heritage and is built to scale the trails of Moab or cruise the vast highways of the western states. Built from 1963 to 1991, the Wagoneer was the first four-wheel-drive vehicle mated to an automatic transmission, pioneering the first modern SUV. The classic Jeep Wagoneer is a beloved icon and continues to enjoy a robust following of enthusiasts worldwide.

The Jeep Wagoneer heritage vehicle is powered by a 5.7-liter V-8 and is mated to a four-speed automatic transmission.

It causes me physical pain to know this will never be an actual production vehicle. This rig is perfect–I especially love the color and the painted wheels. 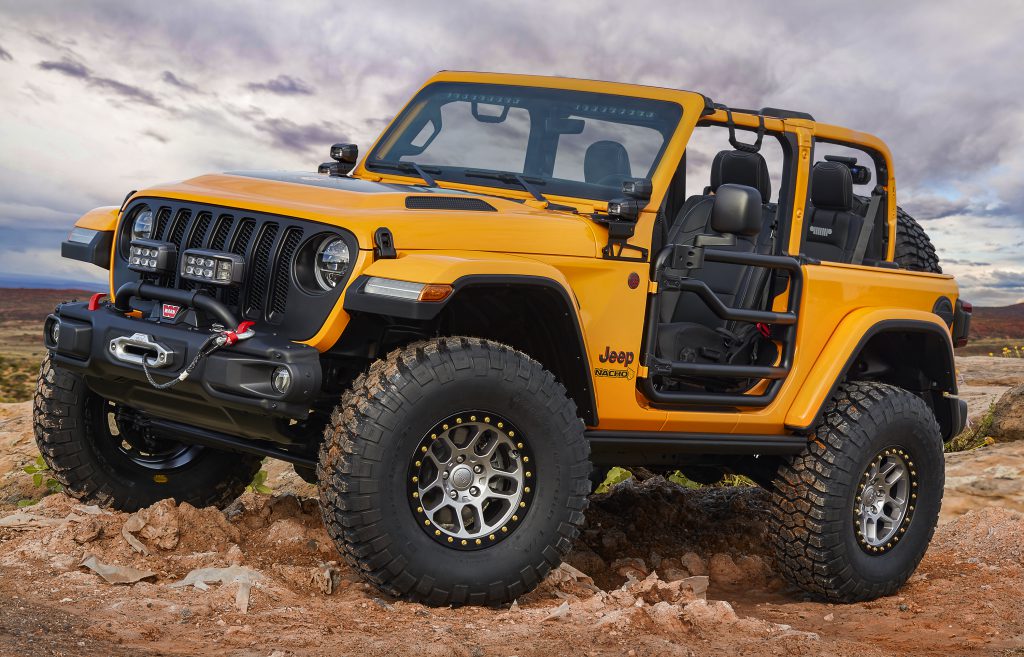 The Nacho Jeep serves as a rolling catalog loaded with selections from the Mopar brand’s Jeep Performance Parts (JPP) menu, offering a blueprint off-roaders can follow to create their own custom trail vehicle. 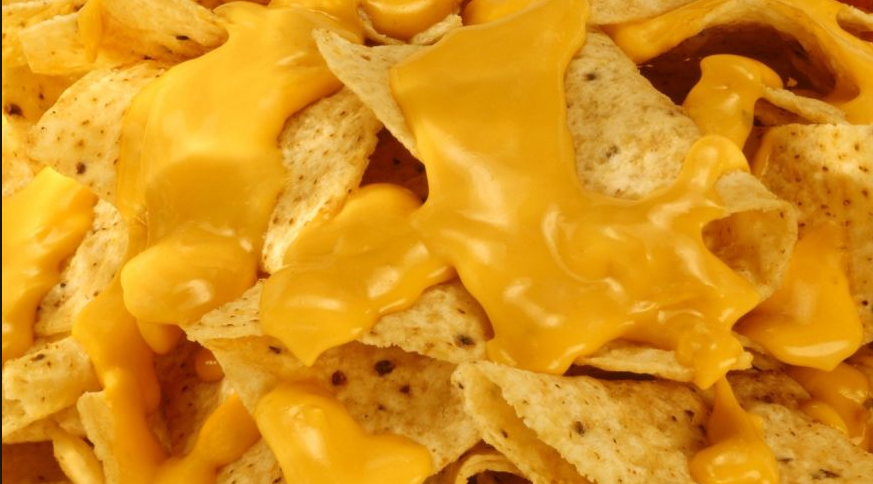 Before a single part or accessory is added, this 2018 Jeep Wrangler Rubicon already stands out thanks to the rare Nacho yellow color. Jeep Performance Parts featured on the Nacho concept include a brawny hood that is accented with the standard black hood graphic featuring the all-new JPP badge, which is engineered to accommodate a cold-air intake that feeds the 2.0-liter turbocharged I-4 engine. The satin black Mopar grille adds contrast to the Nacho exterior, and the sturdy steel Rubicon bumper offers off-road protection and functionality, and includes a Warn Winch kit.

A 2-inch lift kit elevates the Nacho concept for increased off-road clearance and includes new 2.5-inch diameter aluminum body shocks. Oversized 37-inch tires wrap around 17-inch beadlock-capable wheels, and a satin-carbon finish on the wheels is the sole conceptual touch on the Nacho concept. The beadlock trim rings are finished in high-gloss back and secured with cadmium-plated bolts. Other Jeep Performance Parts include rock rails that are thicker and wider to protect the exterior and carry a grippier coating similar to that used on Ram Truck bedliners, 2-inch-round tube doors, and grab handles embossed with the iconic Jeep grille logo to assist in vehicle ingress.

The spare tire tailgate hinge reinforcement provides a rock-solid foundation for a spare tire carrier that mounts to the tailgate with strength enough to handle 37-inch tires. A JPP fuel door in black finish completes the exterior.

Love the name and color, and I really love the squat, bulldog stance. If I had $20,000 to spend on cool Jeep accessories, I would hope my ride would turn out something like this. 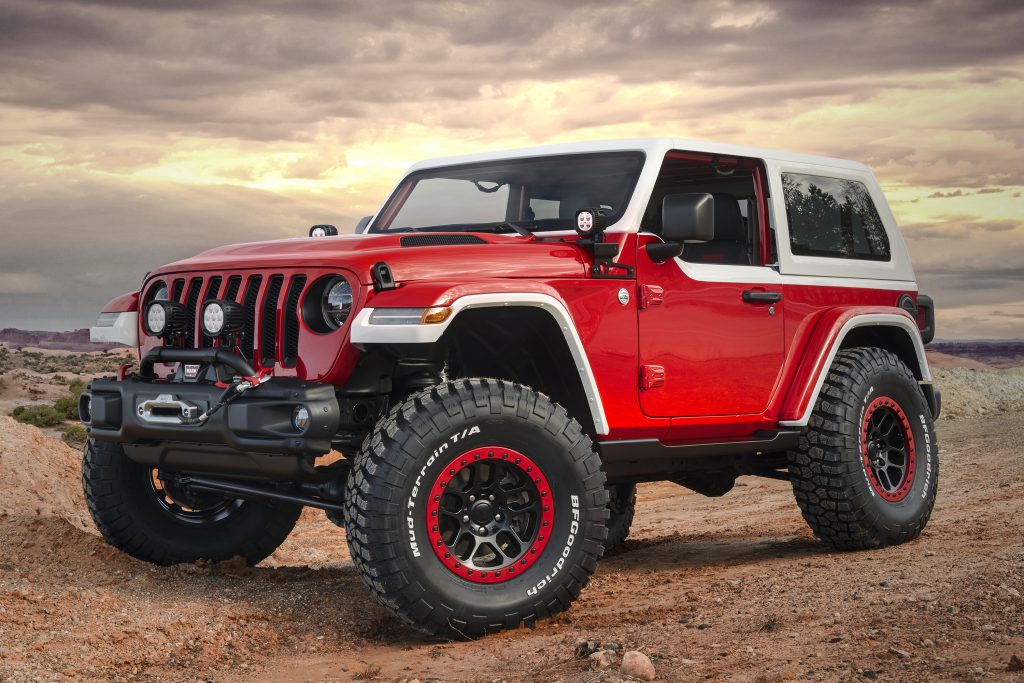 Available Jeep Performance Parts concept modifications combine to bring to life the Jeep Jeepster concept. Based on a Wrangler Rubicon, this concept evokes the color palette and speedy styling of the 1966 Jeepster.

The original’s classic two-tone graphic theme is mirrored on its modern-day counterpart with a Firecracker Red body, set off by a Bright White concept hardtop, chopped by two inches, and a Bright White custom windshield raked back 2.5 degrees to create a cropped, compact appearance. The customized windshield maintains the all-new Wrangler’s convenient fold-down feature. Bright White also accents the perimeter of the Rubicon fender flares, and an upper portion of the concept half doors. Jeep badging is replaced with a tri-color Jeepster hard badge.

The Jeepster deftly balances concept possibilities with a range of presently available Jeep Performance Parts, including a JPP hood and graphic, without the optional cold-air intake or snorkel. LED off-road lights in 5- and 7-inch applications illuminate the trail for the Jeepster, shining bright at up to 8,000 lumens. The LED lights are mounted to the A-pillar via light brackets. The Rubicon steel bumper features premium production LED fog lamps.

Inside the Jeepster, a concept tubular roll cage replaces the sport bar and an additional 38-inch tire is secured with a custom in-cabin spare tire carrier. The interior meshes off-road functionality with premium features, including black Katzkin leather seats with Rubicon Red Jeep grille logos embroidered on the seatbacks, and Rubicon Red accent stitching on the seat bolsters. The instrument panel inserts are Firecracker Red to tie in with the exterior.

Relocation of the spare tire to the cabin provides an opportunity for another custom touch: concept storage packs mounted to the tailgate for transport of gear and supplies such as food, water and tools. The packs feature a split design to accommodate the rearview camera. A concept rock step — a unique combination of a rock rail/side step — completes the Jeepster.

If there is a classic Jeep that deserves more love, it’s the Jeepster. This cool concept does a decent job of capturing the general look and feel of the original. For more pics of the original Jeepster, click on the link below. 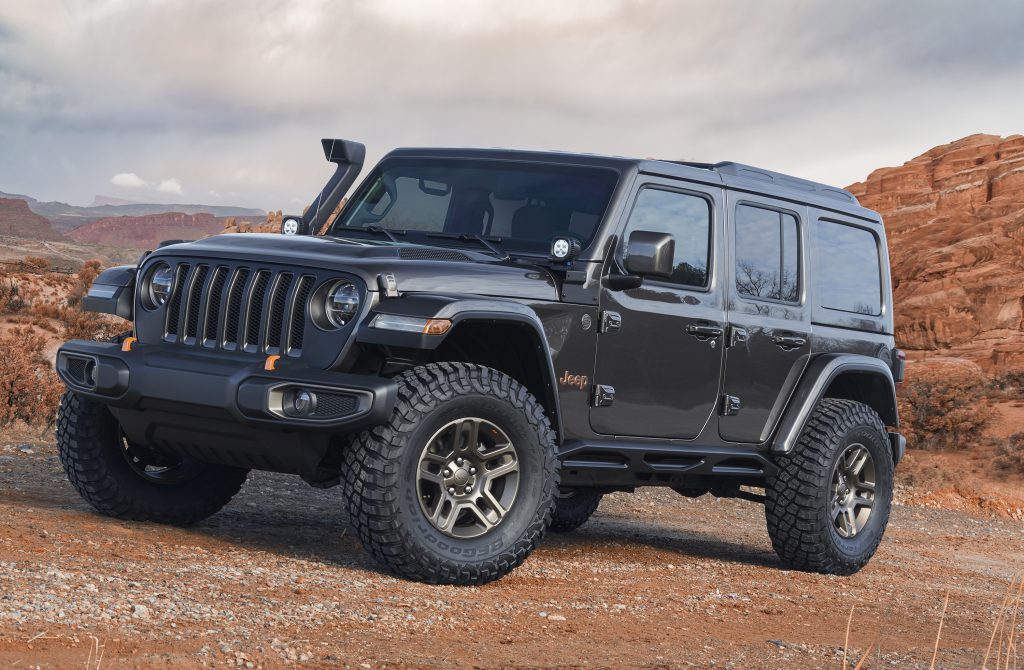 The Jeep J-Wagon concept is personalized with Jeep Performance Parts to create a premium-styled vehicle equally at home on the trails and urban cityscapes.

Starting as a Wrangler Sahara, the J-Wagon is painted a conceptual Warm Neutral Grey with warm-tinted glass, and complemented with subtle Brass Monkey touches throughout the exterior. The J-Wagon features a version of the JPP hood designed with a cutout kit to work with the available snorkel, an appropriate choice for the sealed-cabin style of the vehicle. The hood latch is Brass Monkey and further embellished with a black Willys logo.

For hardcore off-roaders, new 5-inch LED lights mount with JPP brackets to deliver commercial and military grade illumination. That trail detail is balanced with the street-appeal of a Mopar black grille pulled from a Wrangler Rubicon, and features body-color matching bezel trim. The premium Sahara bumper aligns with the vehicle’s color pattern via Brass Monkey fog lamp bezels. The J-Wagon concept also features 17-inch slot-design wheels that are also finished in Brass Monkey, a treatment chosen after receiving positive feedback in a sneak peek at the 2017 SEMA Show.

Premium appointments are the story inside. Camel-color Katzkin leather seats give an elite feel and feature stark brown piping and plow-through inserts that mimic the triangulated grille design of the concept rock rails. Eye-level Brass Monkey trim and bezel accents on the HVAC vents, door handles and steering wheel harmonize the interior with the exterior.

This is probably about as much stuff as you can tack onto a Wrangler and not have it look obnoxious. Love how the J-Wagon demands a second look, without screaming “modified!” I would be delighted to be seen driving this beast around–sans the snorkel, of course.