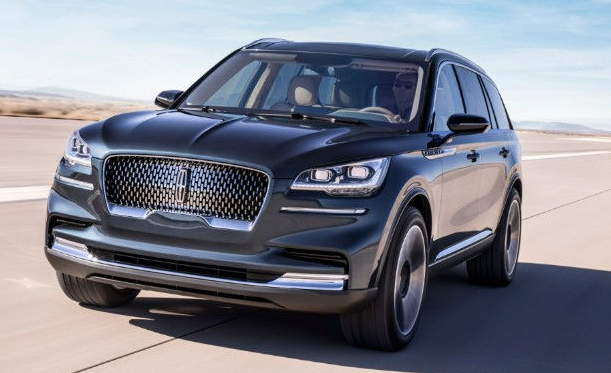 At the 2018 New York Auto Show, Lincoln unveiled a “preview” version of the three-row SUV that is set to join its lineup next year, presumably as a 2019 model. The Lincoln Aviator revives an SUV name from the brand’s recent past, and will be built on the same rear-wheel-drive platform that is set to underpin the forthcoming redesigned Ford Explorer.

Though Lincoln hasn’t yet provided any specific information on powertrains, the company says that the Aviator will offer a twin-turbocharged engine (we’re guessing a V6 in the neighborhood of 350 horsepower) and Lincoln’s first plug-in hybrid model, which will also utilize the twin-turbo engine.

The Aviator will be packed with high-end trimmings and technology features, including “Perfect Position” 30-way power-adjustable front seats with massage function, a 12-inch digital instrument cluster display, and the Lincoln Co-Pilot360 suite of driver-assistance/safety technologies. These will include a new Reverse Brake Assist function that uses a rear camera and sensors, and can automatically apply the brakes to avoid a collision when backing up.

The Aviator’s “Phone as a Key” technology will provide another level of smartphone integration—it will allow owners to lock/unlock and start the vehicle with their smartphone; no key fob is necessary (that’s one less thing to carry in your pocket or purse). The system also allows drivers to recall their personal-profile settings, and activate a locator chirp to find the vehicle in a crowded parking lot. In the event that the smartphone is lost or stolen, the Phone as a Key system can be quickly deleted.

Another newly available feature is Suspension Preview Technology. It utilizes a forward camera scanning the road ahead and automatically adjusts the suspension for upcoming road conditions, providing a smoother ride over potholes and bumps.

Lincoln appears to be taking a page from Honda and Acura’s auto-show playbook by unveiling a slightly dressed-up “teaser” model in advance of the official production version. Aside from a few details like the flashy, upsized wheels and some minor body-trim elements, the showroom-ready Aviator that is slated to arrive in Lincoln dealerships next year will look like this auto-show version. (Expect the full-production Aviator to be unveiled later this year.)