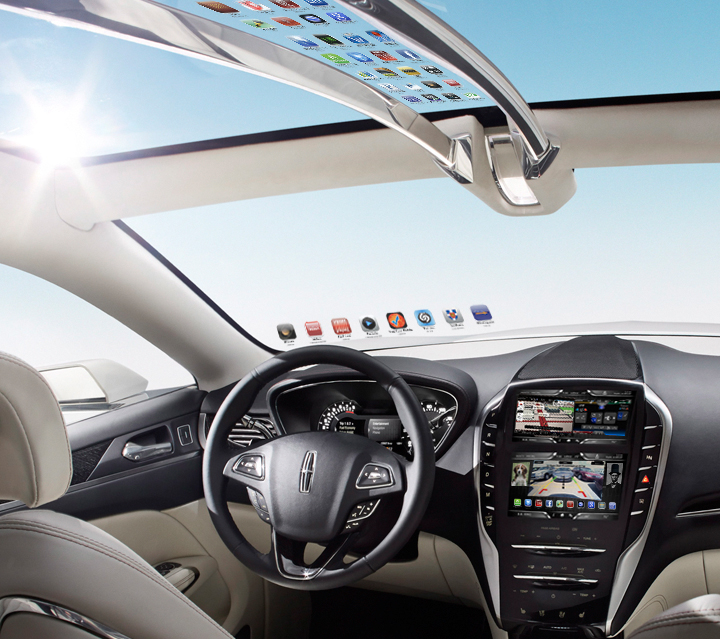 The next-generation SkyTouch system uses motion-sensor technology to allow the user to interact with icons on the windshield and panoramic sunroof. (Image of prototype shown.)

April 1, 2013—Today, the Lincoln Motor Company announced that it is preparing to offer a groundbreaking connectivity/infotainment system on some 2015 Lincoln vehicles. Dubbed “MyLincoln SkyTouch,” the optional system uses next-generation head-up-display technology to deliver a full array of smartphone-app functionality to the fixed panoramic sunroof, as well as select apps to the vehicle’s windshield and center-stack touchscreen.

Jim Farley, Ford Motor Company’s executive vice president of Global Marketing, Sales and Service, explained the need for Lincoln to offer the ambitious new feature. “We’re reinventing the Lincoln brand, and to do that, we need to take things to the next level,” he said. “We realized that to really stand out from the robust features of our class-leading SYNC/MyFord Touch systems, we had to obliterate the boundaries. We were struggling to define what that really meant, and then it hit us: Why not make the entire panoramic sunroof an interactive touchscreen?”

MyLincoln SkyTouch is the result of that epiphany. The system utilizes multiple docking stations for up to four smartphones. Once the phone or phones sync up, the individual icons are displayed in a “SkyRail” section in the center of the sunroof. Users swipe the smudge-resistant SkyRail panel to pull up the desired app in their screen section. The full screen itself is an ultra-high-resolution LCD unit that can deliver Blu-ray-quality HD images.

Specially designed reclining seats with neck-supporting headrests help position passengers for optimum viewing. The driver’s seat offers the same functions, but they’re only operative when the vehicle is in park. The windshield area in front of the driver may also be programmed to display up to eight frequently accessed apps, but those too can be used only when the vehicle is at rest.

SkyTouch uses sophisticated motion and proximity sensors, so in some cases the user won’t have to actually touch the screen or windshield; they can simply make crisp, defined gestures, “like a conductor leading a symphony,” said Farley, to control many functions. The SkyTouch panels also employ electrochromic technology similar to auto-dimming rearview mirrors. If some passengers want a sunroof and others don’t, each occupant can customize the tint level over their individual seating section.

Farley is proud of the expanded viewing area that the SkyTouch screen offers over traditional in-vehicle systems. “At Lincoln, luxury isn’t some piddly little screen stuck into the back of a headrest, or even a quote-unquote ‘widescreen’ panel that flips down from the headliner,” he said. “At Lincoln, luxury is a colossal screen than spans almost the whole width of the headliner, so rear-seat passengers can kick back and really lose themselves in the latest hit movie or video game, and experience their smartphone apps like they never have before.”

“If you think Angry Birds is immersive and addictive when you play it on a 2.5- by 4-inch smartphone screen, wait until you play it on a widescreen-TV-sized high-definition panel above your head, nestled back in a comfy, supportive seat trimmed in supple Bridge of Weir leather . . . with a thumping, THX II Certified premium surround-sound audio system. That’s Angry Birds Lincoln-style, my friends,” said Farley.

SkyTouch designers also strove to incorporate real-time interactivity into the system. When playing a back-and-forth game such as Scrabble, chess, or checkers, users can simply make their move and then, with a quick swipe of their hands, “fling” the virtual game board to their opponent for their turn. (Don’t worry, Scrabble fanatics; since the SkyTouch screen uses modern-day laptop privacy technology, your opponent won’t be able to see your tiles.) Likewise, other app windows can be passed around among occupants in the vehicle using the “fling” method. The rear-seat widescreen set-up is also conducive to head-to-head video games—including a reinvented version of Pong, the original old-school classic.

In addition to the sunroof display, SkyTouch also includes a center-stack instrument cluster comprised of one jumbo-sized LCD panel that can be split into two to four “panes,” allowing simultaneous operation of the navigation system, Bluetooth, climate control, audio system, and (when the vehicle is parked) video-chat functions.

Though many details of the new system are yet to be revealed (including exactly which Lincolns will offer the option), Farley is confident that SkyTouch will be a popular feature among Lincoln buyers. “Today’s discerning luxury customers are a demanding bunch,” he said. “We’re already giving them the sun, the moon, and the stars; now we’re giving them the apps.”